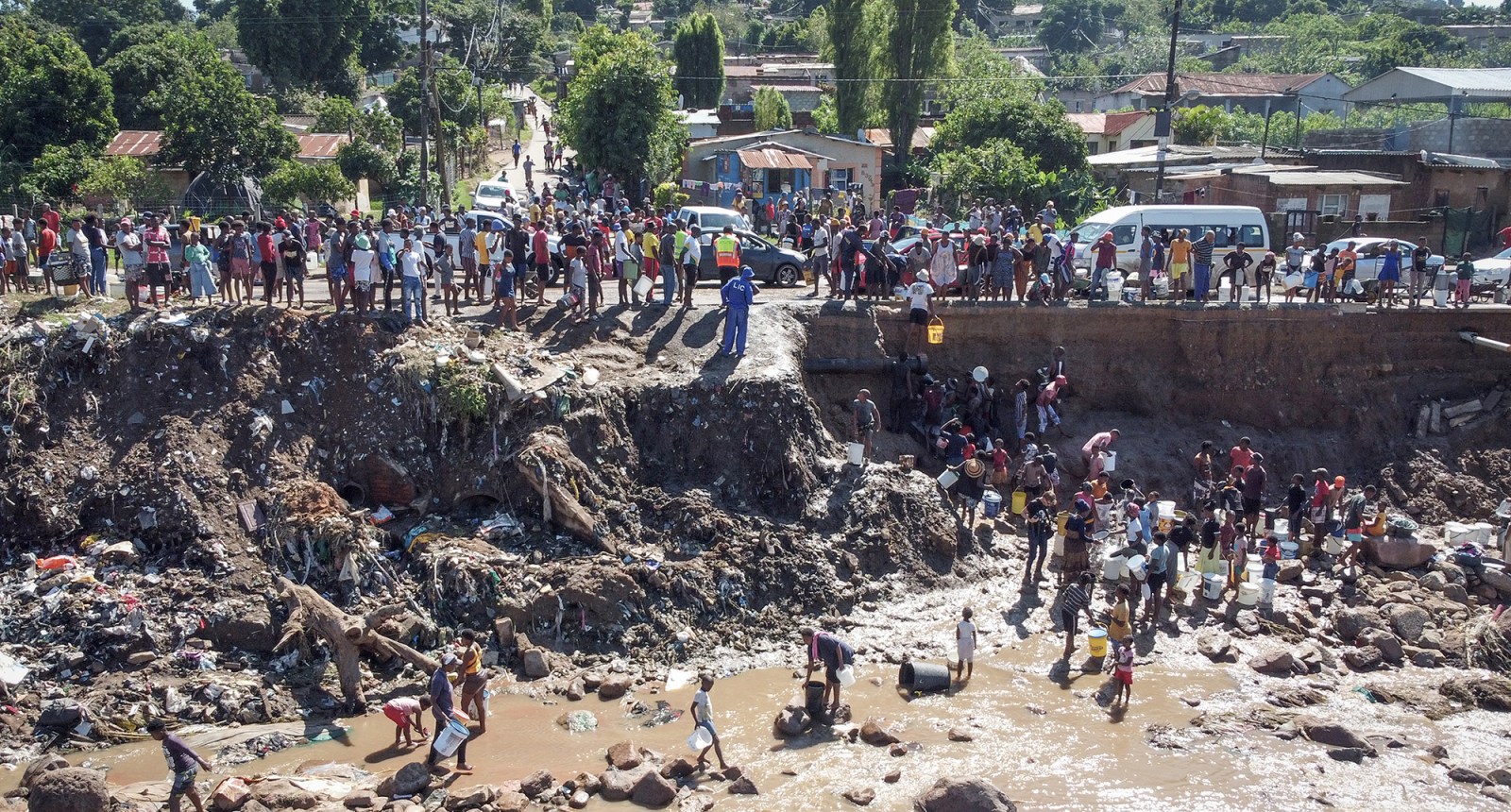 A drone image shows residents collecting clean water from a broken pipe sticking out from a collapsed embankment in Amaoti, north of Durban, on 14 April 2022. Hundreds of people have died after intense rain wreaked havoc on Durban and surrounding regions, destroying homes and infrastructure. (Photo: Shiraaz Mohamed)

Improvements in housing stability are needed across the working-class areas of Durban, as well as for all structures built on vulnerable hills and near the beaches. And much more investment is needed in green infrastructure, including better maintenance of forests, floodplains and wetlands.

Floods have again ravaged eThekwini’s houses, roads and bridges, killing hundreds of people and forcing thousands to take refuge and seek rescue, to evacuate into community halls, or to stay home. Others remain vulnerable, without belongings and homes, in areas without community halls that are stranded without roads and bridges. Torrential rains have caused extraordinary damage to water supply and electrical systems.

The death toll has risen to more than 400, far exceeding the city’s 64 deaths in April 2019, when a “rain bomb” unleashed 168mm in 24 hours, causing R1.1-billion in damage. The previous rainfall record was in October 2017 when 108mm fell, killing 11 people in one day and doing extensive damage, especially around the harbour.

The people hardest hit, because they lack resilience and options, are eThekwini’s poor communities in townships, surrounding rural areas and informal settlements. State housing provision and construction standards for thousands of the city’s residential structures were again revealed as inadequate. Of the city’s 550 informal settlements, at least 164 are located in floodplains.

Could the devastating impacts of this year’s pummeling by “rain bombs” have been expected and defences built?  While it was clearly “unusual”, this kind of extreme weather will not seem unusual in the coming years.

The municipality is often accused of slacking off on climate action, in spite of rhetoric to the contrary. Its Durban Climate Action Plan of 2019 lacks urgency, although it is premised on what climate scientists have been telling us for the past decade, at least: the location of precipitation in South Africa will change, making dry areas drier and wet areas wetter. Extreme weather events will become more common and more intense. We have seen this over the past years when drought devastated large parts of the country, leaving residents without water and threatening food security.

This is the new normal.

After the 2019 “rain bomb” and again this week, President Cyril Ramaphosa visited poor neighbourhoods to survey the damage, promising the mobilisation of funds to assist people in need.

Activists remain unimpressed with the hypocrisy of leaders with direct interests in coal. For more than two decades, they have insisted that the state’s love affair with fossil fuels, mining, high-energy refining and smelting must end. They call for the application of a “polluter pays” principle to raise funds for not only “loss and damage reparations” but also for the necessary climate-proofing investments in poor communities.

With unemployment at nearly 50%, there are pent-up supplies of construction and general workers in communities who can be hired to repair and strengthen drainage systems, construct sturdier houses and safer bridges, restore wetlands and rehabilitate riverine systems to act as a sponge.

Had funding been available beyond the R90-million provided in May-June 2019 to assist with emergency needs (covering just 9% of the April “rain bomb’s” damage), the necessary climate adaptation work could have taken place to help eThekwini cope with last week’s torrential rain and flooding.

After the Covid-19 economic lockdown, in September 2020, Ramaphosa promised to “build back better” by committing the state to hiring 800,000 new workers to assist the more than 1.4 million newly unemployed people.  But budget cuts kicked in the following month, which meant funding to repair damaged infrastructure from 2019 did not materialise, and a just transition to assist workers dislocated by climate catastrophe was purely rhetorical.

What sort of climate-resilient investments are needed?

A first vital step is improving early warning systems and flood preparedness, since the SA Weather Service admitted it had vastly underestimated the storm’s power.

Most obviously, improvements in housing stability are required across the working-class areas of the city, as well as for all structures built on vulnerable hills and near the beaches. And much more investment is needed in green infrastructure, including better maintenance of forests, floodplains and wetlands.

Over and above its failure to invest in flood-defence and climate-proofing infrastructure, the state — from national to municipal levels — can be charged with negligence for:

Given this particular catastrophe, it is up to Durban residents — and all of us in South Africa — to demand of the government that our lives and futures be protected, not neglected. DM

Mary Galvin is an associate professor in anthropology and development studies, and Patrick Bond is a professor in sociology, both at the University of Johannesburg. They write in their personal capacities.