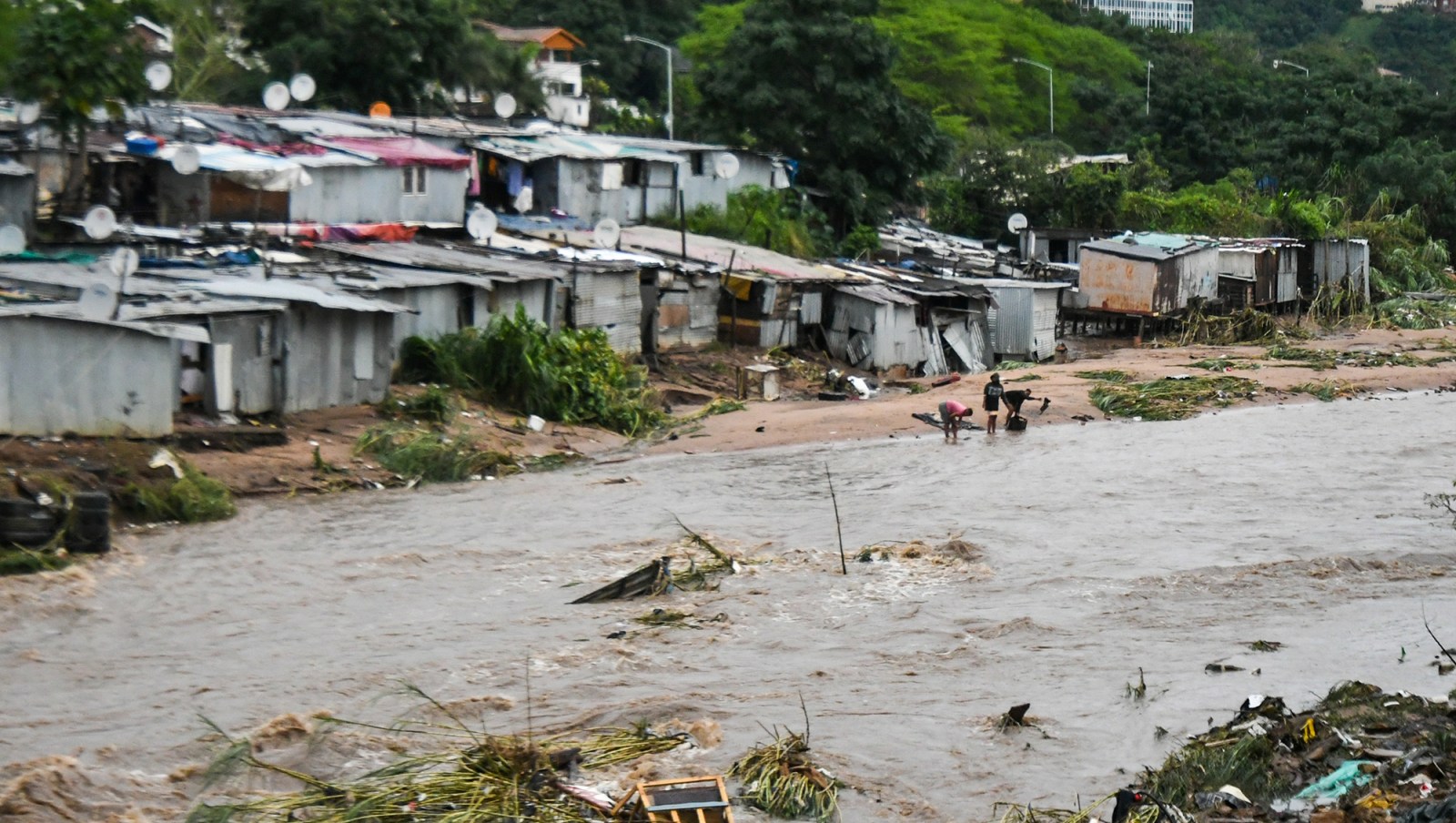 Floodwaters pour through an informal settlement in Durban between M19 and Quarry Road on 12 April 2022. Persistent heavy rain in parts of KwaZulu-Natal has resulted in widespread flooding, collapsing roads and death. (Photo: Gallo Images / Darren Stewart)

A weekend of heavy rain in KwaZulu-Zulu has not let up, causing flooding and mudslides that have killed at least 45 people. The rainfall has been described by forecasters at the SA Weather Service as ‘record-breaking’.

Landslides and mudslides, fast-flowing waters and flooding. Homes destroyed, battered infrastructure, halted commerce and lives snuffed out. These are just some of the consequences of the days of heavy rainfall in KwaZulu-Natal.

The MEC for Cooperative Governance and Traditional Affairs, Sipho Hlomuka, said: “Disaster management teams are continuing to work around the clock to assist residents that have been trapped.”

The department urged those “residing in low-lying areas” to “seek shelter on higher ground”. Disaster management teams have opened public facilities for those who need shelter and the South African National Defence Force is also assisting.

Ishmael Moyo, a forecaster at the South African Weather Service, said that “currently we are observing what we call a low-pressure system… the system that has been dominating central parts of the country for the past few days.

“The system is still there. So for today, we’re still maintaining an orange warning for destructive rainfall… but we’re expecting a clearance in the late afternoon.

We are awaiting assessments from various areas in KZN. We will be in attendance at the JOC Disaster Management meetings and will then intervene based on what’s required. Our condolences💚to families who have lost loved ones and strength to those who have suffered material losses pic.twitter.com/ahR3Ns0tzl

“The reason for the warning is that we’re experiencing a lot of flooding in certain areas, so any amount of rain we’re about to receive will definitely exacerbate the situation or maintain the flooding in those areas.”

Moyo said, “This type of weather is typical for this time of year, and spring and the transitional periods [between seasons] are when we have this weather system.

“We received information today that areas such as Margate, Port Edward have actually received a record-breaking amount of rainfall, but the weather system itself is not unusual for this time of the year, it’s actually typical.”

In a virtual briefing on Tuesday, eThekwini Executive Mayor Mxolisi Kaunda said that Durban was in a “state of disaster” following consecutive days of heavy downpour.

The Witness reported: “Many Durban residents on social media have been complaining that eThekwini did not give them an early warning to prepare ahead of the floods.”

The mayor, however, sought to dispel that notion.

“When the South African Weather Service alerted us to these heavy rains, we issued alerts to the public. We then put our disaster management teams on standby.

“Immediately after receiving reports from the public, which worsened last night, wheels were set in motion for rescue operations and relief aid by our disaster management personnel,” said Kaunda.

eThekwini municipal spokesman Msawakhe Mayisela said the City of eThekwini had “probably” sent out alerts to the public a day or two ago. He referred us to the social media pages of the municipality and the provincial Department of Cooperative Governance and Traditional Affairs. The first mention of flooding is made on the morning of Monday, 11 April in a Facebook post.

The SA Weather Service, however, had issued a “Yellow level 2 warning” for rain in KwaZulu-Natal two days before that.

While no direct attribution to climate change has been established, the disaster in KwaZulu-Natal is notable in that it follows the recent publication of the Working Group 2 report of the Intergovernmental Panel on Climate Change (IPCC).

That report, Climate Change 2022: Impacts, Adaptation and Vulnerability, made a number of findings germane to current events.

It found that “climate change impacts and risks are becoming increasingly complex and more difficult to manage. Multiple climate hazards will occur simultaneously, and multiple climatic and non-climatic risks will interact, resulting in compounding overall risk and risks cascading across sectors and regions.”

However, it also noted that “there are feasible and effective adaptation options which can reduce risks to people and nature”.

One of the most effective means to mitigate the impacts of extreme weather are early warning systems.

Our Burning Planet previously reported that, in response to the release of the report, UN chief António Guterres said: “We must invest equally in adaptation and resilience. That includes the information that allows us to anticipate storms, heatwaves, floods and droughts.

“Today, one third of the world’s people, mainly in the least developed countries and small island developing states, are still not covered by early warning systems. In Africa, it is even worse: 60% of people lack coverage. This is unacceptable, particularly with climate impacts sure to get even worse. Early warnings and action save lives.”

The IPCC report notes that “There is growing evidence of the benefits of early warning systems for urban preparedness decision-making and action for climate and weather-related hazards such as cyclones, hurricanes and floods.”

However, “existing early warning systems remain insufficient and the complexity of urban landforms makes accurate and detailed early warning difficult” and “this is particularly the case in low- and middle-income countries”.

The World Meteorological Organization (WMO) defines an early warning system designed for floods, droughts, heatwaves or storms as “an integrated system which allows people to know that hazardous weather is on its way, and informs how governments, communities and individuals can act to minimise the impending impacts”.

According to a 2021 WMO report on disaster statistics, between 1970 and 2019, a weather, climate or water-related disaster has “occurred on average every day — taking the lives of 115 people and causing $202-million in losses daily”.

The WMO notes that thanks to “improved early warnings and disaster management”, the number of lives lost decreased “almost three-fold over the same period”. DM/OBP