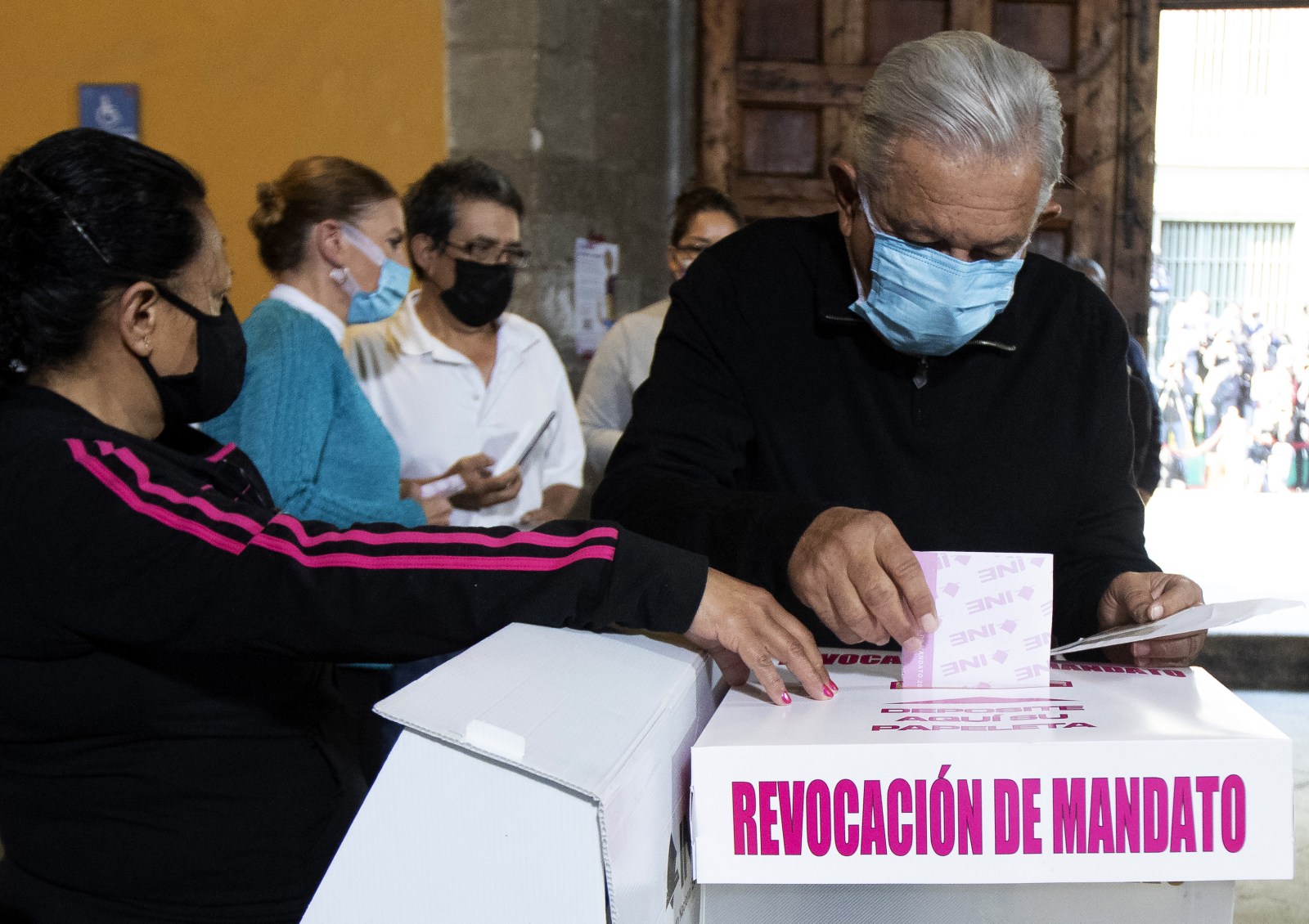 Mexican President, Andres Manuel Lopez Obrador as he casts his vote at a polling place in Mexico City, Mexico, 10 April 2022. The president of Mexico, Andres Manuel López Obrador, cast his vote in the consultation that will decide his continuation in office. EPA-EFE/Presidency of Mexico HANDOUT HANDOUT EDITORIAL USE ONLY/NO SALES

MEXICO CITY, April 10 (Reuters) - Nine out of ten Mexicans voting on Sunday in an unprecedented recall election engineered by President Andres Manuel Lopez Obrador backed him to stay in office, underlining his domination of a polarized political agenda.

Both critics and supporters alike had viewed his victory as a foregone conclusion in a ballot that had fed speculation it could open the door to extending presidential term limits, now limited to a single six-year period.

Between 90.3% and 91.9% voters were predicted to have supported Lopez Obrador, a preliminary estimate from the National Electoral Institute (INE) showed on Sunday night.

Unleashing a string of barbs at adversaries, Lopez Obrador hailed the referendum result as “historic”, and compared his tally favorably with the number of votes won by rivals he defeated to win the presidency, and in other elections.

“We don’t have a king in Mexico,” he said in a video address. “It’s a democracy, and the people are in charge.”

A pugnacious leftist, Lopez Obrador was the architect of the first so-called ‘recall referendum’ in modern Mexico, calling it vital to confirm his democratic mandate.

Turnout in the vote was forecast at between 17% and 18.2%, INE said, well below a threshold of 40% for it to be binding, and lower than some polls.

Opposition leaders had actively discouraged supporters from voting, with many condemning the plebiscite as a propaganda exercise and a costly distraction from real problems.

Turnout had been expected to range between 16% and 25% in a poll published by newspaper El Financiero this month.

Political analysts had said Lopez Obrador would seize on the result as a personal triumph in his bid to push a constitutional change to the electricity market through Congress in the coming week, although he looks short of votes.

Lopez Obrador denies wanting to extend his term, but he used the referendum to fire up supporters and test his strength ahead of gubernatorial elections in June.

Since taking office in December 2018, Lopez Obrador has fallen short of campaign pledges to reduce violent crime and lift the economy, unsettling investors by trying to renegotiate contracts and tightening state control of natural resources.

But his successful roll-out of welfare programs and relentless daily depiction of a political narrative in which he stars as a morally upright defender of the poor against a corrupt, wealthy elite has helped buttress his popularity.

Many Mexicans regard the folksy Lopez Obrador as a welcome departure from previous leaders often seen as aloof from the broader population in a society that remains highly unequal.

“I want the president to continue in power,” said one of them, Guillermina Gomez, after voting in the central state of Tlaxcala.

The 60-year-old homemaker said his welfare programs had allowed her grandchildren to enroll in high school, which her meager household income had kept out of the reach of her children.

“Thanks to him we’ve received benefits that no one else has given us.”

Costing millions of dollars and heavily publicized in the capital, the referendum asked Mexicans if Lopez Obrador’s mandate should be revoked “due to loss of trust,” or he should conclude his term as scheduled on Sept. 30, 2024.

Maribel Rosas, 36, who voted for Lopez Obrador to become president in 2018, said she had cast a vote for him to be removed from office, as he was failing to help the middle class and spurring social polarisation.

“This division isn’t going to get us anywhere,” said Rosas, a resident of Mexico City who works in advertising.

The president had accused the National Electoral Institute of trying to stymie the referendum, which it denied. He quickly criticized it again after the results.