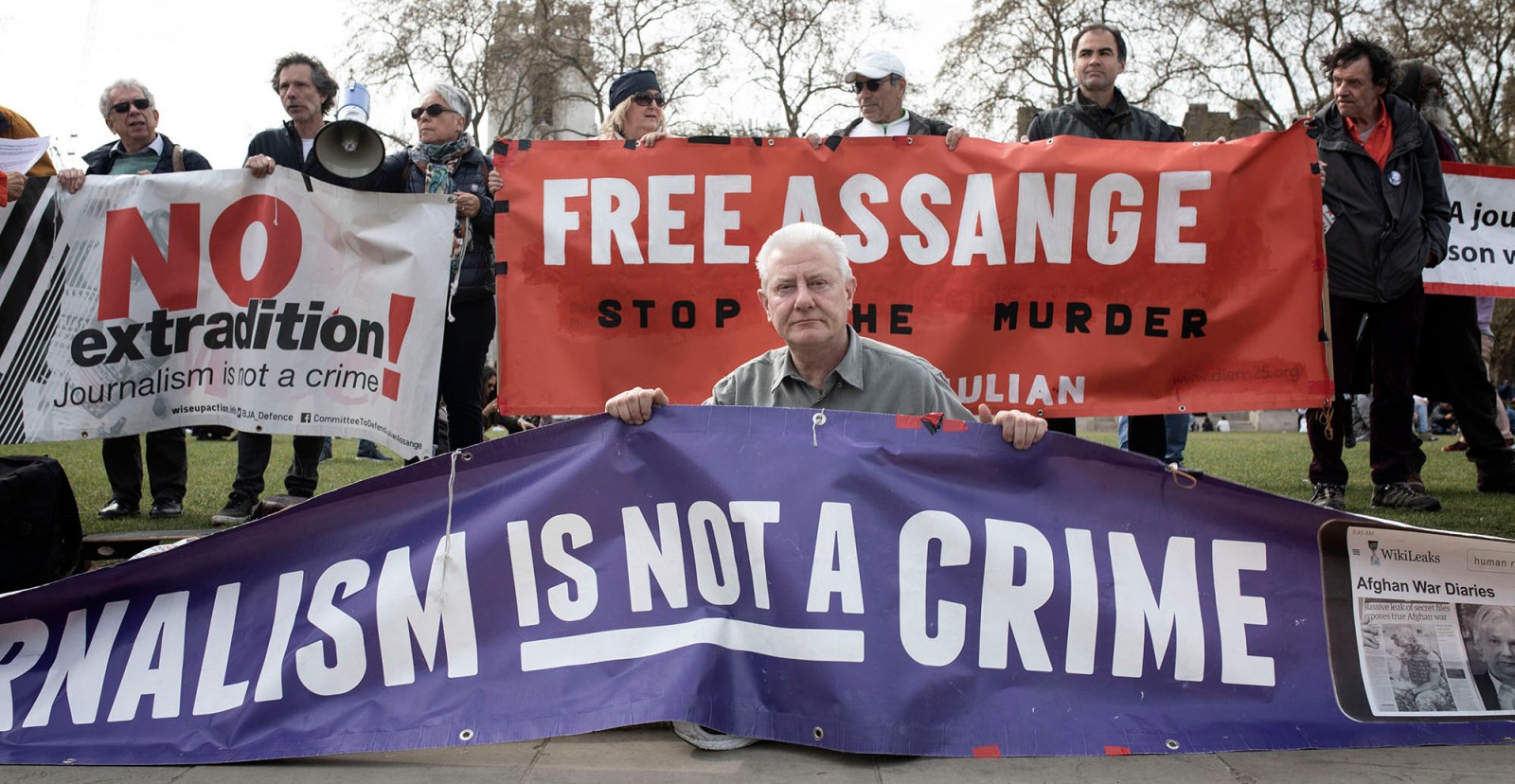 Julian Assange supporters gathered at Parliament Square, London, with placards calling for the release of the WikiLeaks founder on Monday 11 April 2022. Today marks three years since his imprisonment at Belmarsh maximum-security prison in the United Kingdom and his next hearing is set for 20 April 2022 for extradition to the United States where he will face life in prison for the release of alleged US war crimes committed in Afghanistan and Iraq. (Photo: Supplied)

Monday, 11 April marked three years since WikiLeaks founder Julian Assange’s imprisonment at Belmarsh maximum-security prison in the UK. A handful of his supporters gathered at Parliament Square, London, with placards calling for his release.

Since his arrest at the Ecuadorian embassy on 11 April 2019, Julian Assange’s case has been in and out of British courts, but the final deadline is edging closer for his extradition to the US — where he faces life in prison for the release of a large consignment of classified military information.

Gloria Wildman (78) was one of a handful of Assange’s supporters gathered at Parliament Square, London on Monday — three years after Assange’s imprisonment at Belmarsh maximum-security prison.

Her red hat was adorned with “Free Assange” stickers, she held a placard that read “Honk for freedom” and handed out flyers to tourists passing by.

“It’s about all of us. He may be locked up, but we are in prison too. This is so wrong because he is an innocent man, he hasn’t committed any crime,” she said.

Another supporter, Sadia Kokni (41), said: “We’re here to show the UK government that we’re against his incarceration, he has not done anything legally or morally wrong, he’s just stood up for the truth.”

Courtney Wisdom (64) agreed that Assange is an innocent man who has been tortured. She was disappointed with the rather small turnout.

“Our whole country should be ashamed of themselves… we are all complicit in his suffering,” said Wisdom.

In 2010, WikiLeaks published 91,000 classified US military documents covering the war in Afghanistan from 2004 to 2010. The military leak is considered the largest to date, detailing controversial airstrikes and the deaths of thousands of civilians. If extradited to the US and convicted, Assange faces 175 years in prison.

Organisations including the International Federation of Journalists and Reporters Without Borders have repeatedly come to Assange’s defence, calling for his release and the blocking of his extradition to the US in the interests of investigative journalism and press freedom.

Journalists and publishers are of vital importance in scrutinising governments, exposing their misdeeds and holding perpetrators of human rights violations to account, according to Amnesty International Secretary-General Agnès Callamard.

In a statement released on 26 October 2021, Callamard wrote that it is a “damning indictment” that after two decades, no one has been held responsible for alleged US war crimes committed in Afghanistan and Iraq, but “a publisher who exposed such crimes is potentially facing a lifetime in jail”.

Australian-born Assange is a controversial figure. In November 2010, Swedish authorities issued an arrest warrant based on two sexual assault allegations. He presented himself to police in London and was granted conditional bail at a UK high court. But on 2 November 2011, the high court ruled that Assange should face accusations of rape in Sweden, which prompted him to apply for political asylum at the Ecuadorian embassy in London in June 2012, where he spent seven years.

On 11 April 2019, he was forcibly removed from the Ecuadorian embassy by British authorities for failing to surrender to the court after losing his extradition appeal to Sweden. The rape charges have since been dropped, but Assange still faces extradition to the US where he faces 18 criminal charges and life in prison.

The lengthy legal saga began on 24 February 2020 when his extradition hearing began at a London court. Almost a year later, in January 2021, Westminster Magistrates’ Court District Judge Vanessa Baraitser blocked the extradition, citing Assange’s mental health, saying if he faced conditions in a US prison he could be a suicide risk.

In December 2021, the UK high court overturned Baraitser’s ruling because US authorities gave assurances that Assange would not face conditions that risked his physical or mental health. In January 2022, a British court ruled that Assange could appeal against the decision, but in a final blow, on 14 March 2022, Britain’s Supreme Court confirmed the high court’s decision, once again denying Assange permission to appeal against the extradition.

The Committee to Protect Journalists released a statement saying it was “deeply disappointed” at the decision to prevent Assange’s extradition to the US.

“The US prosecution of Assange under the 1917 Espionage Act sets a harmful precedent and undermines investigative reporting globally. We urge the UK Home Secretary to block his extradition,” reads the statement.

Assange has not yet exhausted his legal options. His next hearing will be at the Westminster Magistrates’ Court on Wednesday, 20 April where the presiding officer is due to issue the order for his extradition to the US. The order will then go to UK Home Secretary Priti Patel for approval. Assange’s defence can then make submissions directly to Patel on 18 May 2022.

In the meantime, his supporters will continue gathering around London. Alison Mason travelled from Australia and joined one of the protest groups every Saturday at the tourist hub of Piccadilly Circus.

“The extradition papers will be signed off even though he’s done nothing wrong, he spoke the truth and he needs to be freed,” she said. DM