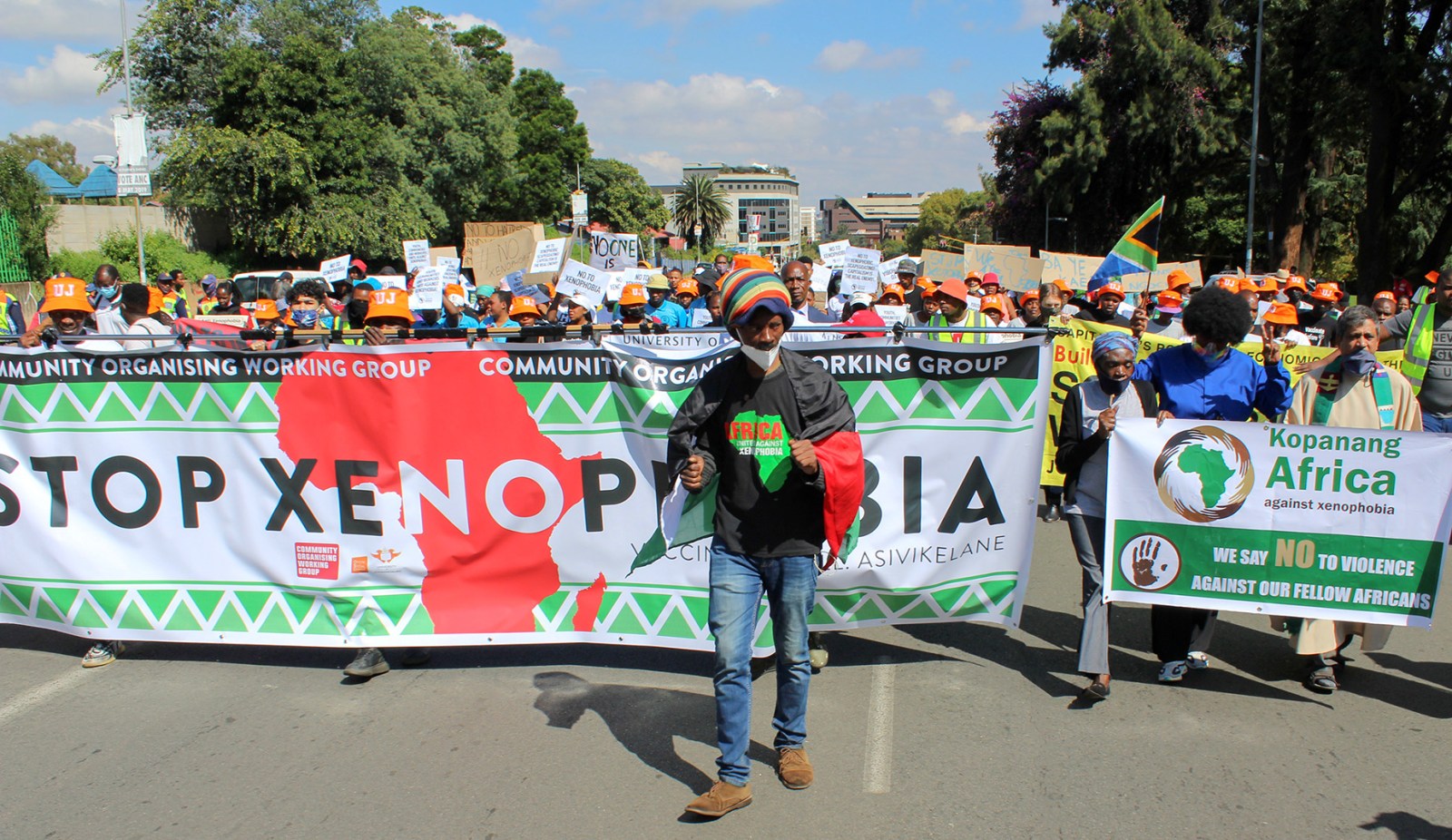 Members and supporters of Kopanang Africa Against Xenophobia march through Johannesburg to protest against xenophobia in South Africa on 26 March 2022. (Photo: Tamsin Metelerkamp)

The Kopanang Africa Against Xenophobia march went ahead on Saturday, 26 March, despite the Johannesburg Metropolitan Police Department’s earlier attempt to prohibit it. About 500 people walked through the inner city to hand over a memorandum against xenophobia at the Hillbrow and Johannesburg Central police stations.

That the Kopanang Africa Against Xenophobia march could go ahead on Saturday, 26 March — despite an earlier prohibition of the event by the Johannesburg Metropolitan Police Department (JMPD) — is not only a victory for the coalition itself, but for all civil society organisations that have struggled against prohibitions on their gatherings. It was significant in demonstrating that the right to protest, as one of the main tools such organisations have, is still protected and guaranteed.

This was according to General Moyo, the acting chairperson of the movement. He was among about 500 people who gathered on Saturday morning for the anti-xenophobia march through Johannesburg. The participants walked from Pieter Roos Park to the Johannesburg Central Police Station — a three-and-a-half-hour journey, punctuated by speeches from various civil society leaders.

“[The march] is very much important as we are seeing the likes of your Operation Dudula gaining momentum in our communities, penetrating different movements and communities and making sure that they push this narrative and these xenophobic tendencies,” Moyo told Maverick Citizen at the march. “So, we wanted to build a counter-force and a counter-movement.”

Threats and a potential backlash from Operation Dudula, the anti-foreigner movement, were some of the JMPD’s reasons for initially prohibiting the march. They informed the movement of the prohibition on 17 March, five days before the original event date on 21 March, Human Rights Day.

Kopanang Africa Against Xenophobia subsequently approached the Johannesburg High Court to have the prohibition overturned. On 25 March, Judge Allyson Crutchfield ruled that the march should be allowed to go ahead, and that the JMPD should meet conveners to establish the reasonable conditions under which it would take place.

“[W]e’re focusing on addressing the South African Police Service [SAPS], and I think it’s in particular because of the way in which we were treated when we did inform them that we are wanting to march, a peaceful march to denounce xenophobia,” said Sharon Ekambaram of Lawyers for Human Rights, another representative of the movement.

“But more than that, that [among] the law enforcement agents in our country, there’s a serious issue of what I would think is racial profiling, of xenophobia, institutionalised xenophobia, in how we manage migration and the issue of people who are undocumented.”

A fundamental aspect of all policy implementation in South Africa is respect for human rights and dignity, said Ekambaram, adding this is not applied equally to all those living in the country.

During the course of the march, the movement handed over a memorandum to representatives of the Hillbrow and Johannesburg Central police stations. It called upon the government and police service to show leadership in taking action against those fuelling violence and xenophobic hatred.

“We are marching today to register our rejection of the actions of ‘Operation Dudula’ and all other such acts — whether verbal or physical — that are dividing Africans on our continent by spreading hatred, xenophobia, division, greed and violence. These acts have continued in many instances with impunity,” stated the memorandum.

Among the demands issued in the memorandum are that:

The movement also called upon the state to implement a basic income grant and a wealth tax to fund basic socioeconomic services and infrastructure. Social services, they believe, should be accessible and affordable to all, regardless of nationality.

The march was intended to send a message of inclusivity, unity and diversity, according to Dale McKinley, one of the spokespeople. While it was understandable that tensions erupted within the country, given ongoing socioeconomic pressures and the desperation of the working class, it was not productive to target immigrants, he said, because often foreign nationals were illegalised not by choice, but due to stolen papers or failures of the Department of Home Affairs.

“What we have to say to people who have belonged to Operation Dudula is, there are legitimate grievances, but… you’re directing your anger in the wrong direction,” said McKinley. “Don’t direct them [your anger] at immigrants. Let’s direct them where they belong, which is to the state and government and our policies and procedures, and let’s begin to create an inclusive economy. Let’s begin to create productive activities for all.”

Conversations on xenophobia and Afrophobia are important given the legacy of slavery, colonisation, capitalism and imperialism on the African continent, said Jean Bwasa, an Africa analyst and march attendee. If young people were not educated about this, society would continue to be divided.

“In dividing… we are not able to build our own continent, which has got 1.6 billion people that if we were to work together, we would be having one of the biggest economic hubs of Africa in terms of all the minerals that we have, of which we do not benefit,” said Bwasa.

The march took place against a backdrop of growing anti-foreigner sentiment in Johannesburg and other parts of the country. Operation Dudula has been active on social media and in communities, spreading hate speech and inciting violence against those it considers illegal immigrants, according to the memorandum.

On 19 February, Operation Dudula members marched in Hillbrow, calling for illegal foreigners to leave South Africa, according to a Daily Maverick report. A week before, members had gathered in the same area, only to be dispersed by police as they had not sought permission for the event.

Earlier this month, Daily Maverick reported on violent clashes between a group known as the Alexandra Dudula Movement and migrant business owners. Three Zimbabweans and a South African were injured.

A group of about 30 Operation Dudula members gathered outside Johannesburg Central Police Station on Saturday, at the same time the anti-xenophobia march arrived in the area. They were on the opposite side of the precinct, however, and the groups did not come into contact.

Some at the Operation Dudula gathering held signs saying “South Africans first” and “We say no to the transfer of poverty into our country”. MC