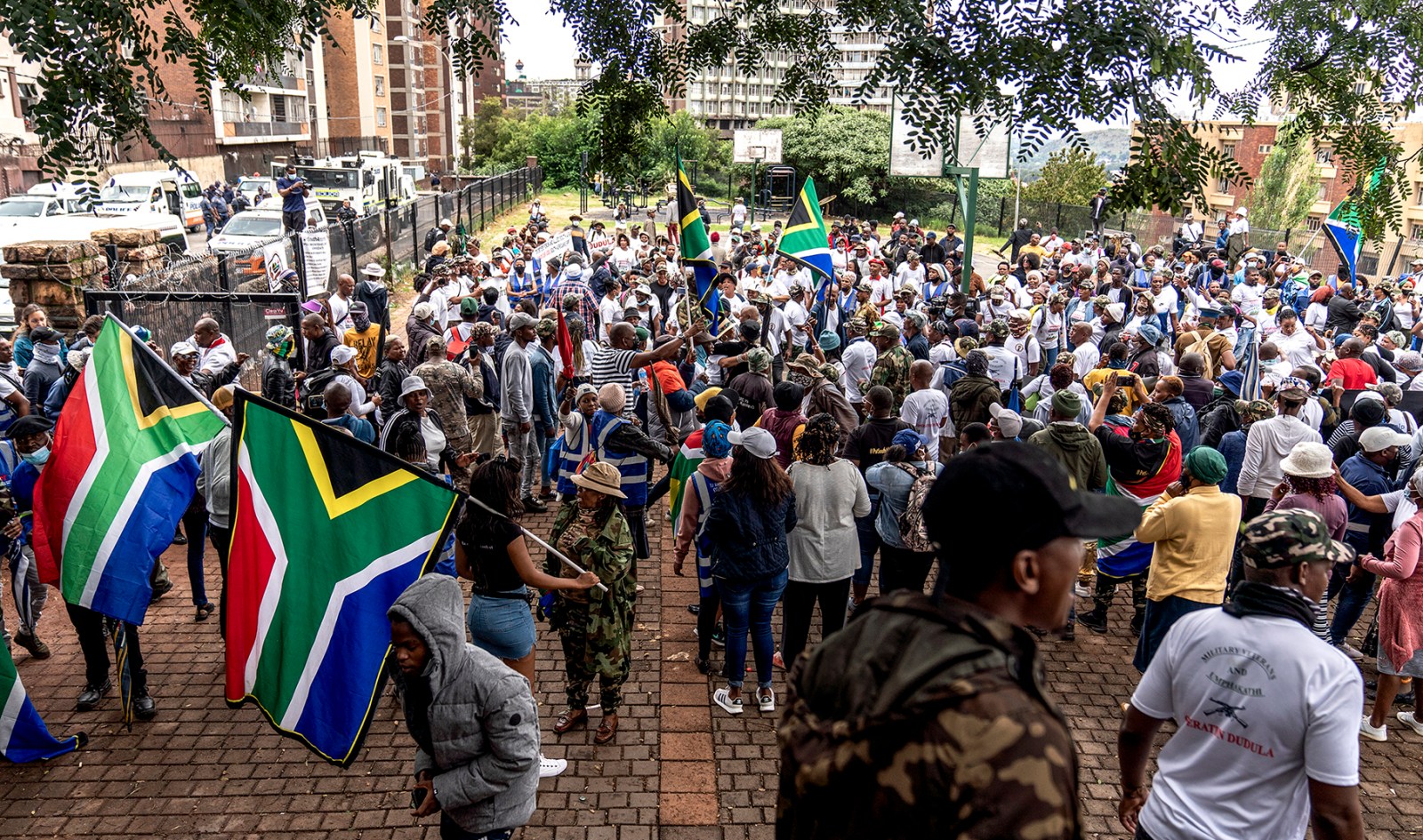 Operation Dudula members gather at a park in Hillbrow before their protest against foreign workers on 19 February 2022. (Photo: Shiraaz Mohamed)

As Dudula members sang anti-foreigner songs, groups of foreign nationals held hushed discussions from a safe distance, some of them looking visibly frightened.

An Operation Dudula gathering in Hillbrow on 12 February was dispersed by police using tear gas, rubber bullets and stun grenades. The police said the group had not sought permission for the march and the group vowed to return after securing permission to march a week later.

The group say they want illegal foreign nationals to leave the country as they blame them for occupying jobs that they say should be held by South Africans. The group has repeatedly claimed that many young citizens have qualifications but have turned to drugs and alcohol because they cannot find work.

Operation Dudula also claims that foreign nationals are to blame for the high crime levels in Hillbrow.

This weekend, hundreds of members of the group marched through the streets of Hillbrow, monitored by a strong police contingent. The march followed a brief assembly at a park in Berea that was addressed by some of the leaders.

“We warn those who are sourcing votes using our name. We will not be deterred by these people. We need to be vigilant of people who want to sabotage our operation,” Operation Dudula chairperson Peter Dimba said.

Some political party leaders, including EFF leader Julius Malema, have condemned the group’s actions, with Malema calling them a group of criminals.

Dimba said Operation Dudula was not a platform for anarchy, but it would not accommodate people who oppose its agenda. He also raised concern about some members of the group whom he alleged were hurt in the skirmish with police last week.

Dimba alleged that four members of the group were injured after being shot with rubber bullets by police, including a pensioner and a woman who was shot in a foot.

Supporters were bused in from various areas of Johannesburg, including Soweto. Some were dressed in white Operation Dudula T-shirts and others in T-shirts printed with “Put South Africa First”. Yet others were dressed in Umkhonto WeSizwe Military Veterans (MKMVA) uniforms.

Operation Dudula gained prominence last year on Youth Day, 16 June, when it organised a protest against illegal foreigners, illegal businesses and drugs. During that protest, SAPS members accompanied Operation Dudula members as they searched houses for drugs. Nhlanhla Lux Dlamini, who rose to prominence while defending Maponya Mall in Soweto during the July 2021 violence, leads the group.

In Hillbrow on Saturday, businesses on some streets came to a standstill for a while and police formed a protective chain in front of shops. Operation Dudula members continued singing while waving South African flags. The group delivered a memorandum at one of the stores and delivered another at a Spar supermarket they accused of hiring too many foreign nationals.

“We are telling the store owners that the time for hiring foreign nationals is over, we want jobs for South Africans,” said Operation Dudula member Sifiso Kumalo.

The Operation Dudula march was supported by some members of #PutSouthAfricaFirst, an anti-foreigner movement vocal on social media, and members of the All Truck Drivers Foundation (ATDF).

The ATDF has been vocal on the issue of hiring foreign nationals in the trucking industry. The organisation has continually argued that foreign truck drivers should not be hired in the industry because truck driving is not a scarce skill.

“We are feeling the same pain and we are speaking in one voice with Operation Dudula, that illegal foreigners should leave our country also because they commit crimes,” ATDF General Secretary Sifiso Nyathi said.

Nyathi said illegal foreign nationals were no longer wanted, and that politicians do not feel their pain as they are sitting comfortably.

“We are fighting for a common goal,” said Nyathi. “We were always in cahoots with #PutSouthAfricaFirst on this and other common issues, and now that Operation Dudula is here, we will also work with them.”

Pensioner Zakhele Shezi (74), who lives in Johannesburg, witnessed the march in Hillbrow and disagreed with Operation Dudula’s approach.

“It’s not the ideal situation. We have seen how these things end. If there are people who feel that illegal foreigners are no longer needed, they should follow the right procedure. South Africa is a free country, anything other than that amounts to xenophobia,” said Shezi.

He continued: “My worry is that the continued drumming of the anti-foreigner message on a daily basis might incite other marauders and lead to an uncontrollable situation like we saw in July last year.”

“This is a major crisis,” said Professor Loren Landau of the Migration and Development unit at the University of Oxford and Wits University’s African Centre for Migration and Society. He warned that the issue had escalated and needed urgent attention.

A 44-year-old Zimbabwean, who asked not to be named, said: “I’m scared for my children because things clearly look very uncertain. This xenophobia issue has been going on for years and there being no solution means some South Africans are finding it hard to live side by side with us Zimbabweans.”

Saturday’s march was peaceful and Operation Dudula did not clash with police, in contrast to last week. The SAPS seemed to be operating under strict orders to watch the group closely and ensure that they did not break the law.

Operation Dudula member Dudu Nxumalo, from Soweto, said, “We are saying even those who are unemployed should go and face unemployment in their own countries. We need to take stock. Far too many of us young people have no jobs.”

Asked how the scarcity of jobs could be blamed on foreign nationals, Nxumalo claimed, “They have taken all the jobs and are committing all kinds of crimes in our country.”

Anti-foreigner sentiments appear to be building across Johannesburg. Another group, the Alexandra-based Dudula Movement, which claims to be a breakaway from Operation Dudula, has also taken to the streets recently. Dudula Movement spokesperson Agnes Malatjie told Daily Maverick the group was focused on targeting businesses she claimed are illegally owned by foreigners.

Landau said: “Government, business and civil society have seen these marches and marauders as little more than localised troublemakers or petty criminals. They are slowly realising that the gangster politics they have helped create is eroding the state’s ability to adjudicate the law.” DM