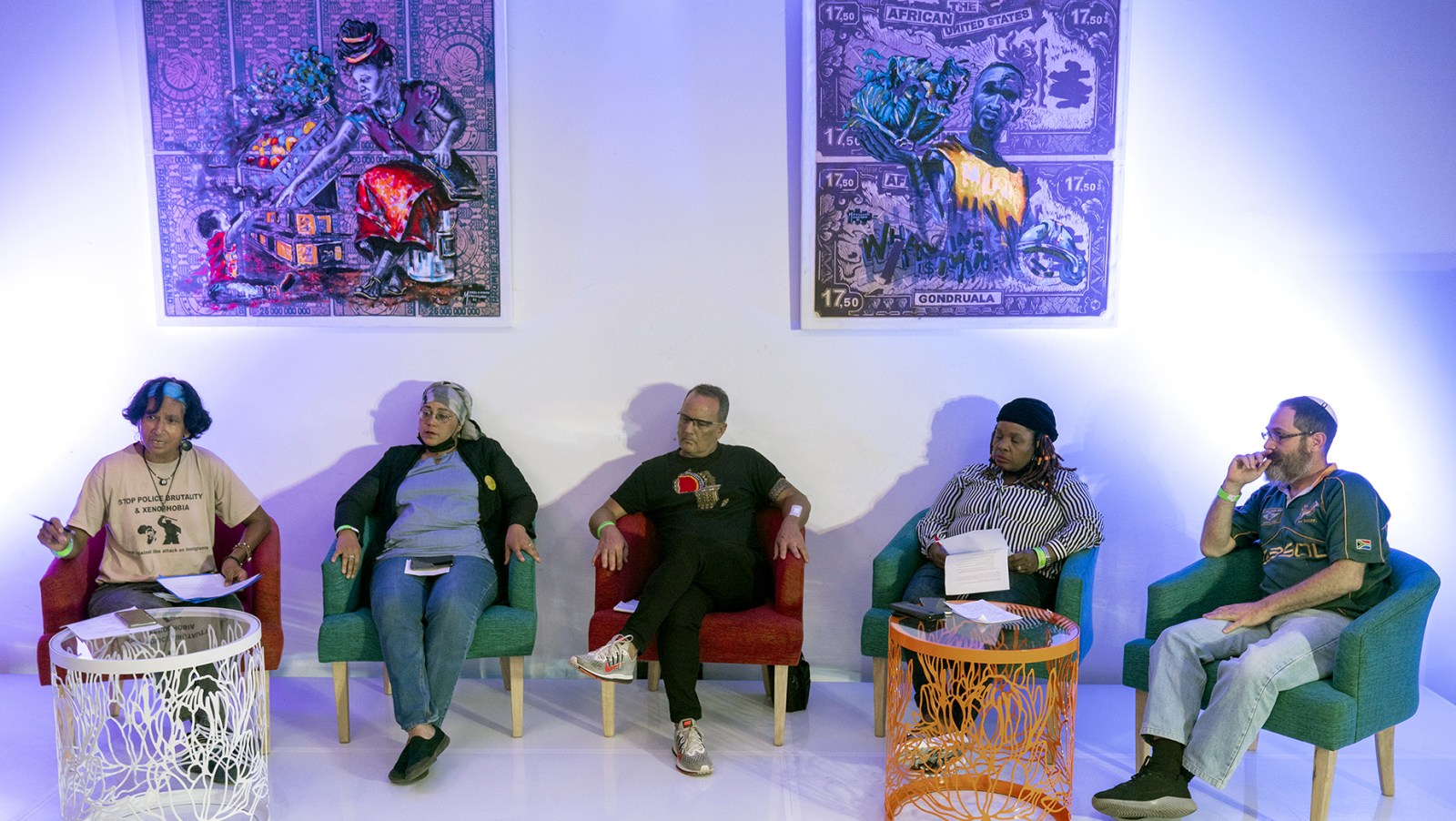 Kopanang Africa Against Xenophobia is approaching the high court to challenge a ban on an anti-xenophobia march in Johannesburg that was planned for Human Rights Day, 21 March 2022. Representatives of the group held a press conference on 20 March 2022 at the Constitution Hill Human Rights Festival. From left: Sharon Ekambaram from Lawyers for Human Rights; Julekha Latib from the One Voice of All Hawkers Association; Dale McKinley, a spokesperson for KAAX; Janet Munakamwe, chairperson of the African Diaspora Workers Network; and Rabbi Sa'ar Shaked. (Photo: Shiraaz Mohamed).

The anti-xenophobia group’s planned march on Human Rights Day, to highlight peace and tolerance, was called off because the Johannesburg Metropolitan Police Department decided it was a risk to public safety.

Kopanang Africa Against Xenophobia (KAAX), a coalition of civil society organisations rallying against xenophobia in South Africa, intends to approach the high court with an application to have the prohibition of its planned anti-xenophobia march overturned. The coalition’s legal representative, the Socio-Economic Rights Institute of South Africa, will be completing the application on Tuesday morning.

At the Constitution Hill Human Rights Festival on Sunday, Dale McKinley, a spokesperson for the coalition, said that they hoped to see the hearing take place on Tuesday afternoon.

“We fully expect that the prohibition will be overturned. There’s no case for it whatsoever in our law, or in any rational logic,” he said.

Among the other KAAX representatives present at the briefing were Sharon Ekambaram from Lawyers for Human Rights; Julekha Latib from the One Voice of All Hawkers Association; Janet Munakamwe, chairperson of the African Diaspora Workers Network; and Rabbi Sa’ar Shaked.

The march against xenophobia was originally scheduled to take place on 21 March 2022, National Human Rights Day. It would have started at Pieter Roos Park in Parktown and ended at the Johannesburg Central Police Station. In compliance with the law around such events, the coalition had notified the Johannesburg Metropolitan Police Department (JMPD) of the march two weeks in advance, according to a Daily Maverick report from 18 March.

The JPMD prohibited the march based on a poster circulated before the event, stating that “illegal immigrants” were going to “march against SA laws”. However, McKinley emphasised that this was a fake poster that misrepresented the movement. The original poster about the event described it as a “march against xenophobia”.

Another reason given for the banning of the march was the threat of violence from other groups should it go ahead, McKinley said.

“If that’s the case… then none of us are going to be allowed to march if somebody disagrees with us and threatens violence,” said McKinley. “It’s completely outrageous. So, we want to make that very clear: it’s unacceptable, the police must do their job [and] must stop the hate speech.”

One of the groups opposed to the march is Operation Dudula, an anti-foreigner movement launched in June 2021, led by Nhlanhla Lux Dlamini.

On 13 March, Dlamini posted a video on Instagram referencing the poster about “illegal foreigners marching against South African laws” on Human Rights Day. He claimed that the day commemorating the Sharpeville massacre was going to be turned into “foreigners’ day”.

“Where these illegal foreigners are going to end up, we’ll march in that same space,” he continued. “So, if our government is failing to manage and contain this situation, we’ll do it ourselves, no problem.”

Social media has been used as a tool to create the illusion that Dlamini and Operation Dudula have mass support across the country, said McKinley.

“They clearly have some support, but… we do not believe [they] have the support of the majority… of the people that live in this country,” he said. “We are the majority and… I think we must not be silenced. We cannot allow minorities and people filled with hate and division to set the agenda.”

Going ahead with the march illegally would have put participants at risk of targeting and arrest by police, according to McKinley. As such, KAAX has postponed the event until 26 March 2022. It will follow the same route that formed part of the original plan.

“We have large amounts of support that are coming in now,” said McKinley. “[We] have over 30 different organisations that have endorsed our campaign and the number is climbing every day. We are hoping… to bring in other sectors like the churches and other people to come march with us, because we need to send a very, very strong message, not just to Operation Dudula and the police, but to our politicians and to the country, that this is unacceptable.”

Some politicians and political parties scapegoat migrants, as it deflects from their failures to implement policies that address serious problems within the country, such as unemployment and poverty, said Ekambaram.

“The scapegoating of migrants is nothing but a scramble, a brazen scramble for votes by the political parties, and the responsibility for what is happening with people working in the informal economy — the most vulnerable in our country — must be laid at the doorstep of these politicians,” she said.

Conflict with Operation Dudula prevents civil society organisations from holding the government to account, said Ekambaram. As part of the march, they will be calling on political leaders to intervene in the private sector, institute a wealth tax and invest in a basic income grant, to address poverty.

Ekambaram described South Africa as being in a “crisis of humanity”, adding that the march was a call for peace and a denouncement of the hatred and division being sown by a small group of people with vested interests.

“Let’s stop this violence,” she said. “Let’s build the South Africa that is meant to be the rainbow nation, and the spirit and the hope for the world, of respect for human rights, human dignity, of all who live in our country.” MC