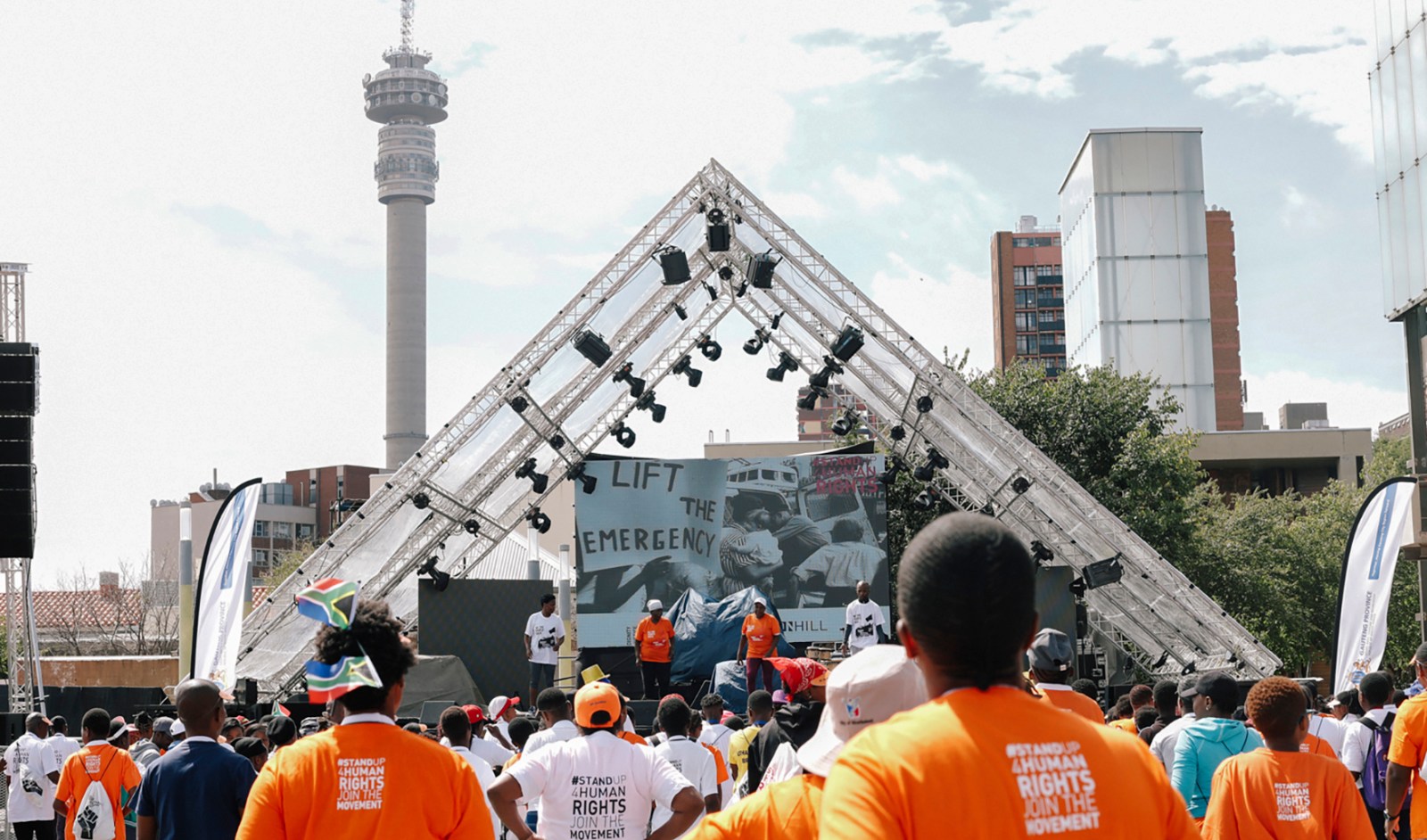 The background images on the main stage at the Constitution Hill Human Rights Festival in March 2019 depict past struggles for human rights, while the live event captures contemporary struggles. (Photo: Zac Modirapula)

The Constitution Hill Human Rights Festival will take place between 19 and 21 March, bringing together a variety of non-government and social justice organisations for three days of discourse, art and music. The event celebrates the progress South Africa has made in terms of human rights, while reminding the public that there is still much to be done to bring about true equality.

A quarter of a century after the approval of the Constitution of South Africa by the Constitutional Court, it is important to consider not only the progress the country has made, but also the efforts that are still required to realise a socially just society. In many areas — health, the environment, the economy — communities are still plagued by inequality, both locally and abroad.

In the spirit of celebrating gains while confronting injustice, Constitution Hill will be hosting its fourth annual Human Rights Festival between 19 and 21 March. The event, which is free to the public, is intended to bring together non-government and social justice organisations, think tanks and artists on issues relating to human rights.

The site of the festival, Constitution Hill, is a former prison and military fort at which many men and women — both world-renowned and ordinary — were kept over the years. Today, it houses the Constitutional Court.

Since its inception in 2018, the festival has served to raise public awareness and create a sense of civic activism, explained Robertson.

“We’re at such a poignant time in our country’s history, where it’s incumbent on each one of us to do something within our small spaces,” she said. “Even if it’s just in our street… to kind of bring people together to clean the dirt or fix the potholes or fix the paving, whatever… it’s from those little issues.”

The final day of the festival, 21 March, marks the 62nd anniversary of the Sharpeville Massacre, commemorated by National Human Rights Day, as well as the International Day for the Elimination of Racial Discrimination.

Constitution Hill will be providing free public tours of its facilities on this day, to acknowledge the sacrifices made by countless South Africans in the pursuit of liberation and human rights.

The various civil society organisations involved in the festival — Greenpeace, the Socio-Economic Rights Institute of South Africa and Right to Know, among others — will use the event as a platform to demonstrate the work they undertake. The groups will also be able to educate the public on how they can contribute within different human rights spaces, said Robertson.

A series of exhibitions and stalls known as the Activism Village will allow social justice organisations to interact directly with visitors, stimulating public debates and dialogue, according to Constitution Hill.

Greenpeace will host an open dialogue focused on intersectional approaches to addressing the high rate of unemployment and the energy crisis, through the adoption of renewable energy, according to Nhlanhla Sibisi, climate and energy campaigner for Greenpeace Africa.

“With the ever-growing impacts of climate change that are fast taking us into a crisis, protecting the environment has not only become important to safeguard it for future generations, but equally so for the existing generation,” said Sibisi.

The environment is one of a number of themes that will be addressed during the course of the festival. Other areas of interest include migration and refugees, LGBTQI+ issues, the rights-based economy and equal access to health.

“[C]ollaborations with key social justice organisations that are partners to the festival contributed to shaping the topics that we have,” said Reuben Phasha, heritage and education manager for Constitution Hill.

About 25 to 30 organisations are collaborating with the festival, said Robertson, adding that there is infrastructure in place for up to 50 to participate.

Constitution Hill is anticipating a large youth turnout at the festival, according to Phasha. It is a family-oriented event with a number of programmes for children.

Robertson believes that it is the youth who are going to change society.

“[I]f you look at the youth movements that have sprung up, I think this country will be saved by the youth. So, it’s really about… giving platforms for those voices to rise.”

The festival’s platforms are not restricted to debates and dialogue. The arts play an important role in the creation of a culture of human rights, according to Constitution Hill. As such, there will be exhibitions of poetry, dance, music, film and visual art.

“[C]onstitution Hill is built on two pillars — art and justice. This brings together those two components,” said Robertson.

“We honestly believe that creativity and creatives and young people are going to be the change that we require in South Africa. And that’s what we hope to bring together on the hill for the festival.” DM