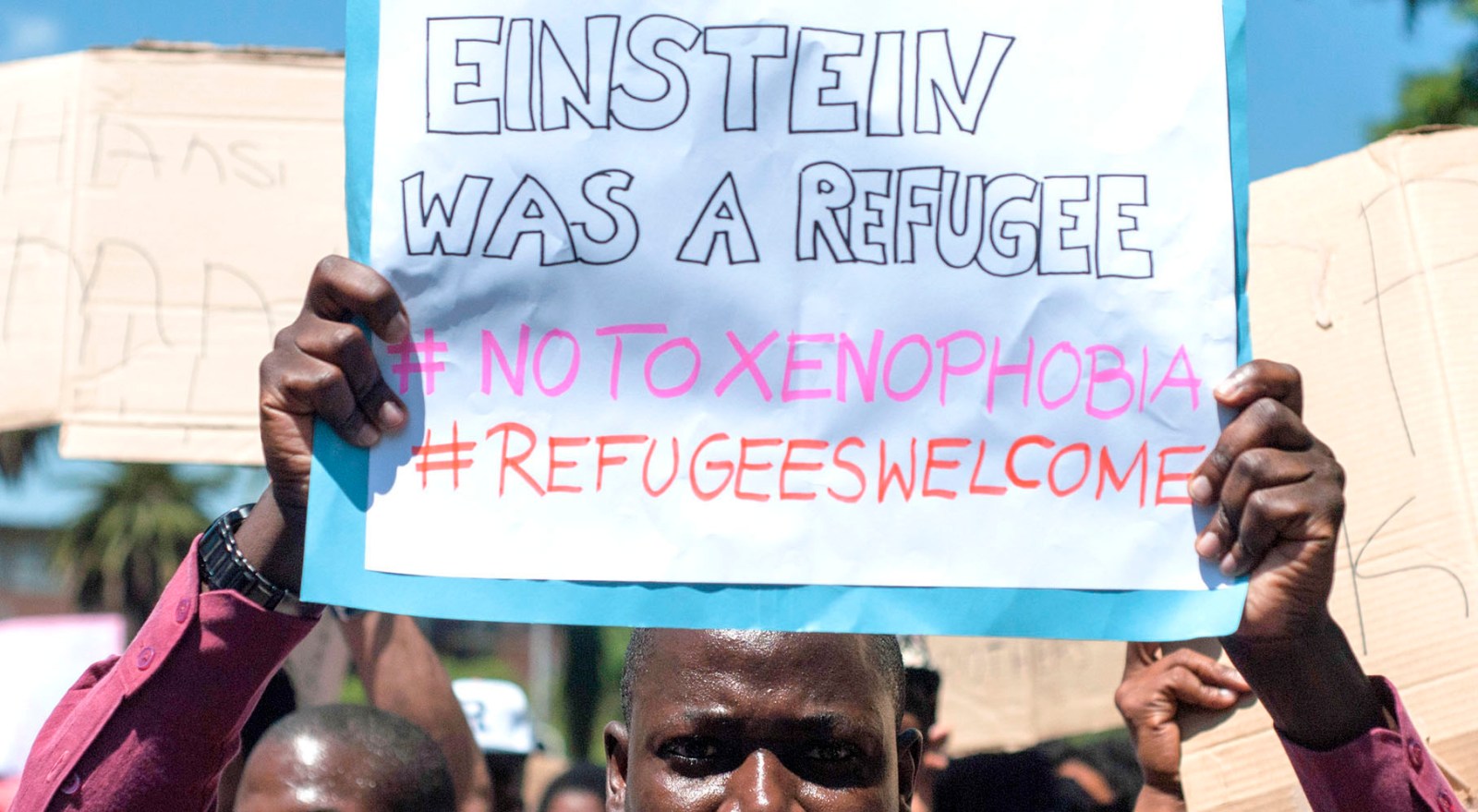 Community groups march to the Union Buildings in Pretoria to protest against poverty and xenophobia on 8 March 2017. The march was organised by the Coalition of Civics Against Xenophobia, which describes itself as a coalition of South Africans and foreigners living in the country. (Photo: Gallo Images / Thapelo Maphakela)

The Kopanang Africa Against Xenophobia march intends to show the generous side of South Africans, and lay blame for crime and unemployment where it belongs: at the door of corruption, State Capture, business and bad government. But now it has been prohibited.

Over the past month activists from a broad coalition of civil society organisations, Kopanang Africa Against Xenophobia (KAAX), have been preparing for a march to rally people in South Africa against xenophobia. The coalition includes trade unions, faith-based organisations and many NGOs.

Activists say the march is necessary to counter the rise of organisations and political parties that are actively promoting xenophobia in South Africa. They fear these organisations risk – or possibly intend – igniting a new violent conflagration that targets primarily black people from other African countries. These parties include the EFF, ActionSA and the Patriotic Alliance, along with Operation Dudula most recently.

The new wave of blame and xenophobia has caused fear and insecurity among many black foreigners, and has led to outbreaks of violence.

The KAAX march intends to show the generous side of South Africans, and lay blame for crime and unemployment where it belongs: at the door of corruption, State Capture, business and bad government.

The activists have the law on their side.

In South Africa the right to protest is entrenched in the Constitution. The Bill of Rights states:

“Everyone has the right, peacefully and unarmed, to assemble, to demonstrate, to picket and to present petitions.”

The importance of the right to protest to democracy is such that the courts have been at pains to protect it, making it clear that under the Regulation of Gatherings Act, demonstrations do not require “permission” from the police or government, but only advance notification, so that relevant authorities can ensure the safety of protesters, the public and property.

Only in rare and exceptional circumstances may a march be banned.

This was the outcome of a case brought by SECTION27 in 2016, on behalf of 94 community health workers in the Free State who had been arrested for participating in an “illegal demonstration” against the Free State health department. Their convictions were eventually quashed after a ruling by the Free State High Court.

According to the law, where possible the police must be notified 10 days in advance of planned marches and pickets of more than 14 people.

In keeping with this, according to its organisers, KAAX first notified the Johannesburg Metropolitan Police Department (JMPD) of the march nearly two weeks ago.

Marchers were due to gather at Pieter Roos Park, near Hillbrow, and march through Johannesburg, ending at the Johannesburg Central Police Station. It has specifically been chosen to mark Human Rights Day, publicly celebrated and recognised as a holiday on the anniversary of the Sharpeville Massacre, as xenophobia is a threat to human rights.

However, in a meeting with the JMPD on Thursday, the march organisers were informed that the march has been prohibited on the grounds of safety.

However, KAAX says that “their stated reason is… Operation Dudula has been circulating messages of intimidation and threats of disruption directed at KAAX, our march and any so-called illegal immigrants who participate”.

KAAX says that “this makes it crystal clear that the police simply do not want to do their job, are effectively caving in to the blackmail of Operation Dudula and are blatantly violating the rights of KAAX and all those participating in the march”.

Indeed, the police’s refusal to grant permission is in stark contrast to the impunity with which Operation Dudula in particular has been able to gather and march in suburbs and townships like Hillbrow, Orange Grove, Alexandra and Soweto. Their marches have been pregnant with the threat of violence and have deliberately sought to intimidate foreign people.

In a related matter, the courts have also refused to intervene. A report in the Sowetan this week explains that the Johannesburg High Court dismissed an attempt by 38 foreigners to interdict Operation Dudula from its campaign on grounds that it was not urgent.

By contrast the KAAX march is intended to be peaceful and to persuade people not to join xenophobic movements.

JMPD spokesperson Xolani Fihla confirmed  on Friday that the march was  “not authorised.” He said that the notification had been considered by the JMPD committee on Wednesday 16 March and that “a major factor was that other groups were opposing the march creating a possibly volatile situation.” Therefore, it was felt that it should “rather be averted than have casualties on the day.”

Another reason, Fihla said, was that KAAX had refused to withdraw a flyer
calling on immigrants to “march against South African laws”. However,
when informed that this flyer had in fact been  distributed as part of a misinformation campaign against the planned march, Fihla said that this was “what the {JMPD} committee had said”.

Fihla says the protesters’ bid for an urgent court review was “the democratic
right of the organisers”. Should a court rule in the marchers’  favour the
JMPD would comply. In the meantime, the police will remain on high alert.

March organisers expressed shock at the JMPD’s refusal. As a result, they have postponed the Johannesburg march until Saturday, 26 March, and are consulting lawyers from Right2Protest and the Socio-Economic Rights Institute who plan to bring an urgent application next week to overturn the JMPD’s decision.

They have called on all people who “desire an inclusive, tolerant, equal and more just society to come and join us [on 26 March] to celebrate diversity, defend equality and struggle for justice for all”.

They are also planning to hold a press conference at 10.30am on Sunday at the Human Rights Festival on Constitution Hill to set out their next steps. DM/MC