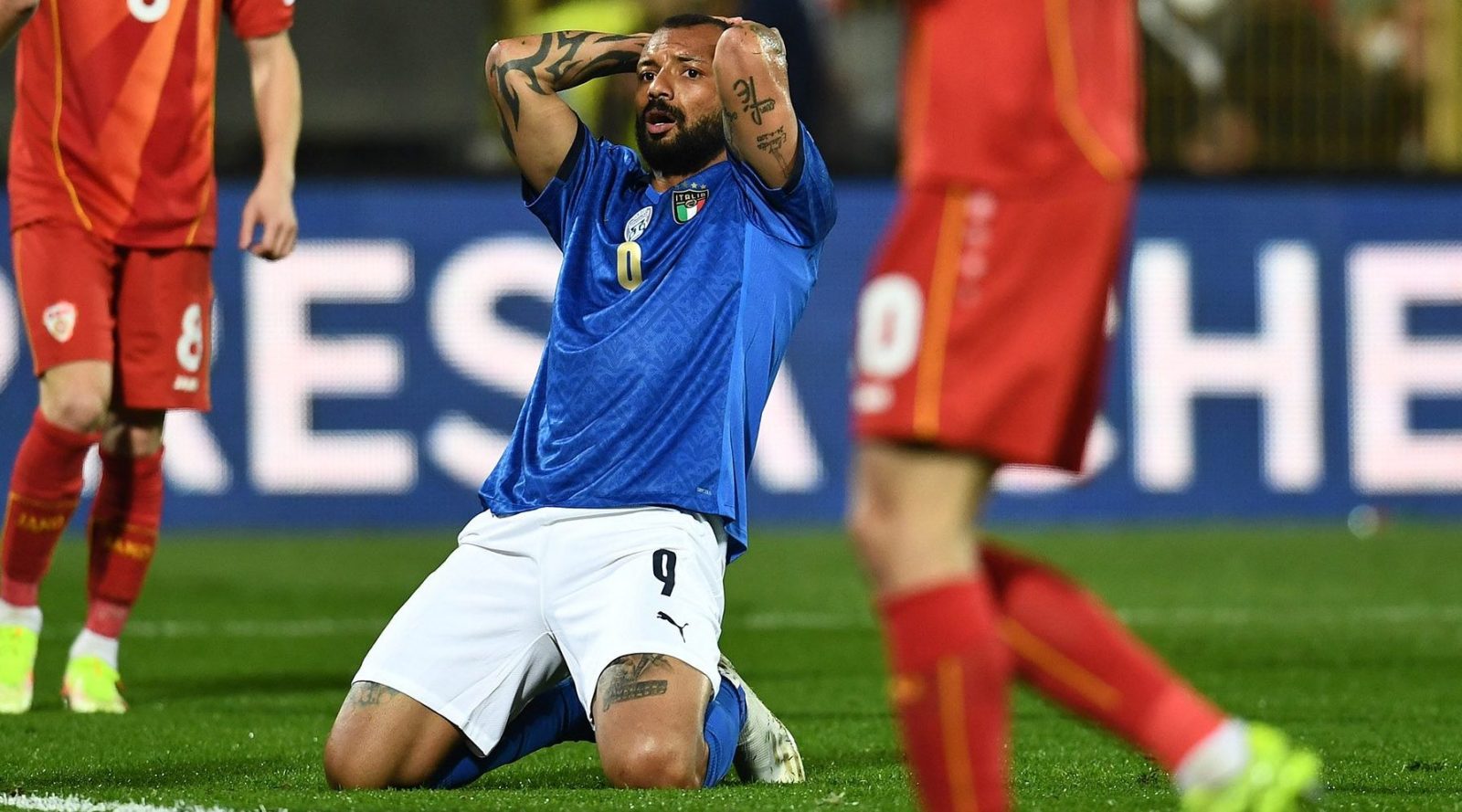 Current European champions Italy suffered a humiliating defeat to minnows North Macedonia to end their hopes of qualifying for the 2022 World Cup in Qatar.

Italy missed out on the World Cup finals again after losing 1-0 at home to North Macedonia in their playoff semifinal on Thursday as Aleksandar Trajkovski’s last-gasp strike earned the visitors a famous win.

Italy broke English hearts last July when they won the European Championship final, but after failing to qualify for the World Cup for the second straight tournament they have left fans thinking their Wembley triumph was a flash in the pan.

For a country that has won the World Cup four times, Italy’s recent record is a national embarrassment.

Since lifting their fourth World Cup trophy in 2006, they have not played a knockout game in the showpiece event, having only won one group stage match at the finals in that time.

Their recent World Cup record is even more distressing.

The shock defeat at home to low-ranking North Macedonia in the playoffs means they have not reached the finals of the tournament since 2014 – and it marks two successive failures to reach the World Cup, either side of the Euro 2020 triumph.

Coming second to Switzerland in their qualifying group, consigning Italy to the playoffs, caused uproar at home. The reaction to the playoff loss will be vitriolic, to say the least.

“Last summer was the most beautiful joy, now comes the greatest disappointment. It is not easy to think of other things. I am very sorry for the boys; I love them much more tonight than in July.

“I am the coach, I am the first responsible, the boys are not. They have a great future, they are strong players for the future of the national team. We did not deserve this defeat.”

Italy had 32 shots at goal to North Macedonia’s five, but it was not as if visiting goalkeeper Stole Dimitrievski had the game of his life. He did not have a difficult save to make and the home side not scoring was down to their own wastefulness.

North Macedonia coach Blagoja Milevski could see the irony of their last-gasp victory.

“We won Italian style against the Italians, a goal with two shots on target,” he told reporters. “I’m very happy for this victory, I’m proud for these guys.”

North Macedonia, who had not qualified for the World Cup before, will face Portugal next Tuesday for a place in Qatar, but no matter what happens in that final playoff, they will always remember their trip to defeat the might of Italy in Palermo.

For the Azzurri, however, it is very much back to square one, 10 months on from one of their finest hours.

Italy were “destroyed and crushed” after missing out on the World Cup, defender Giorgio Chiellini said.

“I am proud of a team that has given everything; it is clear that we are destroyed and crushed, a great void will remain within us,” said Chiellini, who replaced Gianluca Mancini in the 90th minute.

“There is a great disappointment. Even today we played a good game but we couldn’t score. From September to today we have made mistakes and we have paid for them.”

“This group had a great chance at the World Cup, we came from the unbeaten record, so it is difficult to accept what happened tonight,” he said.

“We all know that we have given everything, now surely it is time to ask ourselves some questions.” Reuters/DM