March against xenophobia and for social justice for the ‘excluded majority’ 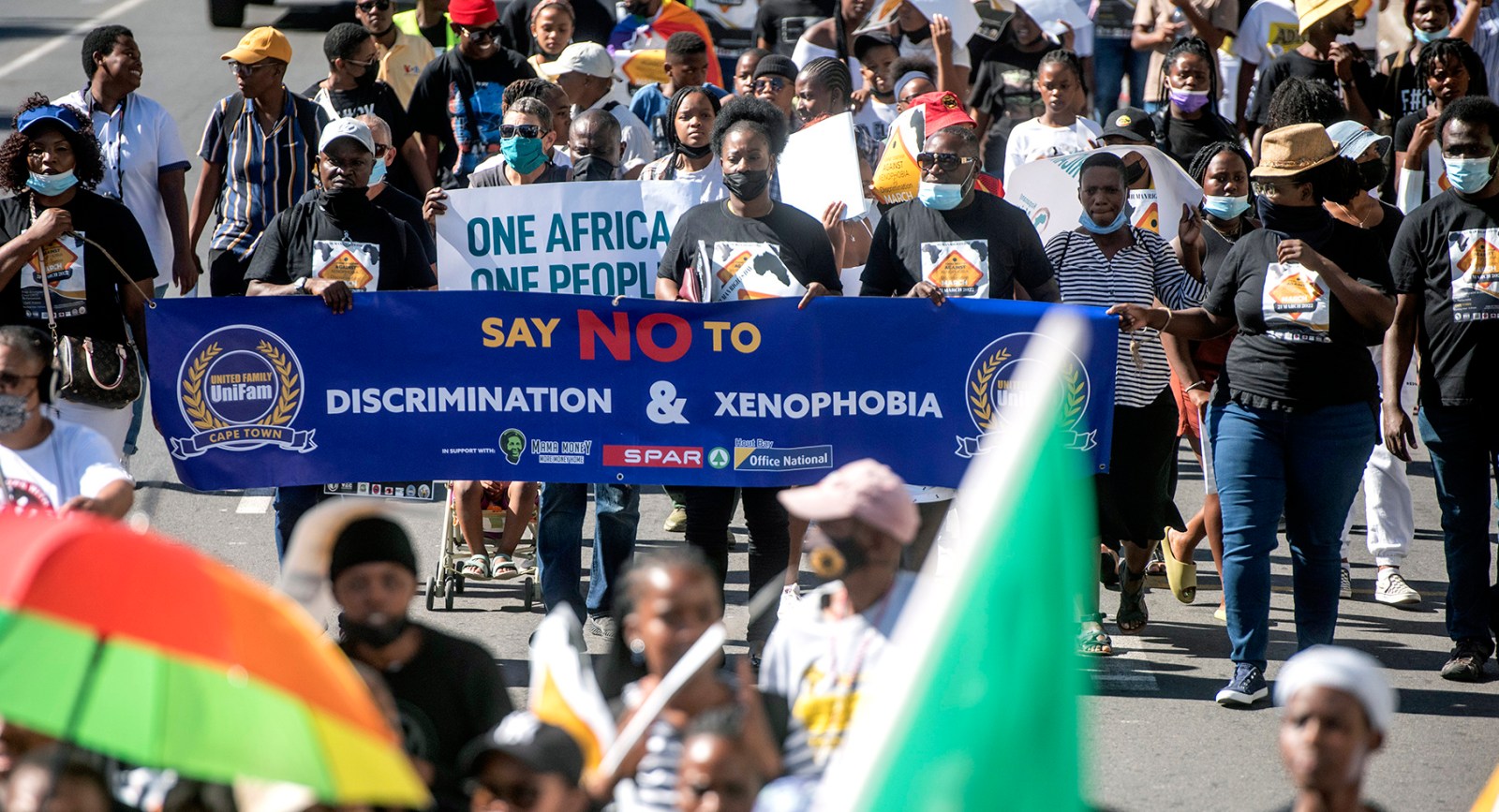 Protestors at the Stand Together Against Xenophobia and Discrimination March from Keisergracht Street to Parliament on March 21, 2022 in Cape Town, South Africa. The march represents a continued effort to stop the xenophobic and discrimination against foreign national. (Photo by Gallo Images/Brenton Geach)

In the face of socioeconomic despair, the poor are increasingly susceptible to manipulation and incitement to acts of xenophobia. But it’s important to recognise that they are ‘victims’ too: of systematic, sustained racism against the black poor, in which we are almost all directly complicit in one way or another. Stepping up campaigns for social justice is the way to achieve peace and celebrate diversity.

Last week the Johannesburg Metropolitan Police Department (JMPD) banned a march that was planned to be a peaceful protest against rising xenophobia and to stand up for core values of the Constitution: the rights of “everyone” to dignity, equality and crucial socioeconomic rights such as access to healthcare services and basic education.

Instead of undertaking to ensure the safety of people wanting to use Human Rights Day to stand up for constitutional rights, the JMPD gave in to people who are using threats of violence and intimidation against the march, arguing that it couldn’t protect the safety of the marchers.

The prohibition was a dereliction of duty by the police. Instead of protecting a fundamental right “of assembly, demonstration, picket and petition” it nullified that right, acting just like the police during the old apartheid order.

Where, we might ask, is police intelligence to investigate and disable those who were threatening violence?

Where, we might ask, is the Government Communication and Information Service, or the SABC, countering xenophobia by promoting the values of tolerance and inclusiveness; offering an antidote to the insidious hate being spread by people with a hidden agenda?

It seems highly likely that the prohibition will be overturned in an urgent application before the South Gauteng High Court this week. The Kopanang Africa Against Xenophobia march will go ahead on this Saturday, 26 March. People of all races, classes and nationalities should join the march and turn it into a festival of tolerance.

It is everyone’s civic duty to march.

The the national police must make sure the march and marchers are protected, and that the JMPD’s “fears” of violence do not become a self-fulfilling prophecy by omission.

We all wish the march to be a success.

Social justice the antivenom for xenophobia

However, it is also important to appreciate that even a powerful march will not bring an end to xenophobia. Xenophobia is taking root again because of the appalling conditions poor and black people are subject to in South Africa.

Their anger coincides with the fact that there are millions of people who have fled to South Africa because of corruption, political violence and maladministration in their own countries – perpetrated by governments that our own government actively props up. Like Mnangagwa in Zimbabwe, Nyusi in Mozambique and Mswati in Swaziland.

In South Africa, the people who should be held accountable for this misery, the business elite, government officials, are out of sight and out of reach. Their culpability is hidden behind crocodile tears and walled-off housing complexes.

In the face of despair, people in poor communities are increasingly susceptible to manipulation and incitement. They are “victims” too: of systematic, sustained racism against the black poor, in which we are almost all directly complicit in one way or another.

On Monday, during a debate on racism at the 2022 Human Rights Festival in Johannesburg, Neeshan Balton, the director of the Ahmed Kathrada Foundation, pointed out:

“We love to complain about the former white government, but a black government has done this to people. Today the Gauteng premier is in Sharpeville, but the same government and premier has allowed the Sharpeville gravesite to become a national disgrace, with sewage running through it. The disasters of Life Esidimeni and Charlotte Maxeke Hospital, both of which could have been prevented, are a repeat of Sharpeville.”

In Balton’s words: “You can only champion anti-racism if you want to be genuine about the rights to equality of black people in this country.”

In response, Lukhona Mnguni, a political scientist from the University of KwaZulu-Natal, said: “There’s an illusion that there’s a government in this country. There isn’t.” Referring to the murders of Abahlali baseMjondolo leaders, he complained: “Police still kill black activists. Have you ever seen a white activist with bodyguards?”

Mnguni warned that “lived racism exists in the daily denial of dignity and socioeconomic rights” to the majority of people in our country.

Countering xenophobia will not be achieved by stigmatising, shaming and blaming the poor who fall prey to it. Yes, the media must urgently investigate and expose the agenda of those driving xenophobia. But activists must simultaneously engage in honest and open conversations with the ordinary people who are expressing, publicly or privately, xenophobic sentiments.

This is something being proposed by the South African Council of Churches (SACC) which argues that underlying xenophobia is “the depth of poverty gnawing at the life opportunities of… the Excluded Majority, South Africans who are historically outside of the main fabric of the economy.”

To address this the SACC recently initiated a National Indaba: what it calls “a national process towards a stable national environment where the growing lawlessness over non-South Africans can be addressed before it spills into the broader decline of the rule of law, through what may seem like “justifiable” acts of public frustration.”

The SACC says: “This National Indaba serves to bring all interested parties to one process of engagement, in an organised and structured manner, with the intention of finding lasting solutions to the tensions over non-South African persons in our society and economy.” (Read the statement here).

We are happy to see leadership from the churches. But there is a need for more visibility and urgency to their campaign. It needs resources and the support of civil society and bodies like the South African Human Rights Commission. Most of all it needs to go into communities to engage with the Excluded Majority, and not be another dialogue about the poor, without the poor.

There is a saying that “politics, like nature, abhors a vacuum”. This is a rule that helps understand the rise of populist and anti-migrant movements globally. There is a vacuum in South Africa; of moral leadership, of united mass organisation for social justice, of political will to improve the lot of the Excluded Majority.

This vacuum can only be filled by a galvanising, inclusive and believable vision for a better society, and activism to achieve it. That is why the lesson of Human Rights Day 2022 must be the need to scale up campaigns to realise the fundamental rights guaranteed by our supreme law, the Constitution, and ensure dignity for all in South Africa. DM/MC