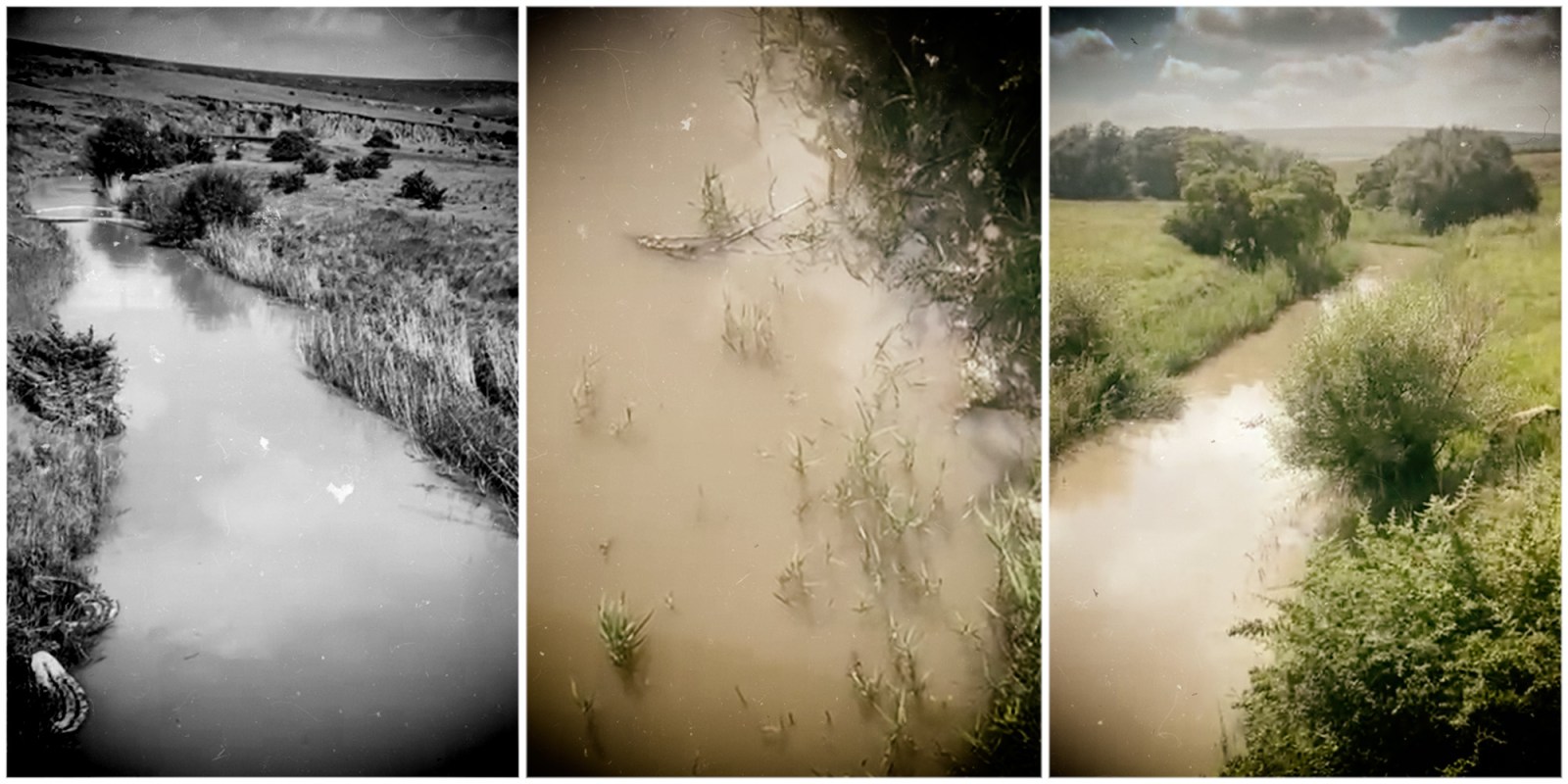 The Meul River in the Free State was contaminated after a diesel spill when a Transnet pipeline was tampered with and fuel stolen on 9 March 2022. (Photos: Danie Visagie)

After the thieves left, thousands more litres of diesel spilt and ran down about 300m to the Meul River in the Free State, contaminating the environment.

There have been more than 70 incidents of theft along Transnet fuel pipelines in the past financial year, one of which occurred near Harrismith in the Free State last Wednesday, when thieves pumped thousands of litres of diesel out of the pipeline.

However, the valve wasn’t closed and after the thieves left, thousands more litres of diesel spilt and ran down about 300m to the Meul River, contaminating the environment.

barely 20km from my home, ‘millions of litres’ of diesel leaking into the pristine highlands from theft damage to the pipeline. pic.twitter.com/ggjmmxsChV

The incident occurred about 15km north of Harrismith near Verkykerskop.

Albi Modise, the spokesperson for the Department of Forestry, Fisheries and the Environment (DFFE), told Daily Maverick that the pipeline was tampered with using a hydraulic jack which lifted the valve and caused the diesel spillage.

“The product went into the Meul Rivier and has a potential to pollute the water resources, downstream water users and aquatic life,” Modise said.

“The pipeline was temporarily shut down to minimise the pressure whilst the block valve was being drained into tankers to prevent further spillages and to conduct the repairs.

“Approximately 6,000 square metres of the land and vegetation adjacent to the block valve were affected. In addition, diesel has flowed into the Meul Rivier.”

Hawks spokesperson Brigadier Thandi Mbambo told Daily Maverick that when Transnet’s tactical team arrived at the scene they found the top cover of the valve had been opened using large wooden blocks.

“There was no one at the scene of the crime and no suspect was arrested. The value of the diesel could not be determined,” said the Hawks report.

Jan van Niekerk, who has a farm about 25km from the diesel spill, told Daily Maverick thefts along the pipeline are a regular occurrence in the area, but that usually after a theft the valve is closed and this type of environmental spill doesn’t occur.

“I’m sure they usually shut the valve again so there is no spillage. But I think something went wrong.”

He said, “The [environmental impact] is very, very bad,” explaining that the contamination of the Meul River, and the Wilge River, which it runs into, will affect the livestock that drink from the water. Farmers near the Meul River have moved their livestock away from the river.

Van Niekerk said on Wednesday morning, “I just drove past there right now. [The diesel is] still coming from under the ground now because the whole ground is contaminated. It’s still leaking into the river, but from underground now.”

In April 2021, Minister of Public Enterprises Pravin Gordhan revealed that in the 2019/2020 financial year, 11.9 million litres of fuel were stolen from Transnet — worth R147-million when calculated using the basic fuel price at the time.

This was as a result of 143 instances of theft and 38 of attempted theft.

Transnet spokesperson Saret Knoetze said that in the current financial year there had been 77 reported thefts, and that earlier this year thefts had been “a bit more frequent”.

“But in the last week, we have seen a spike in incidents, so we have to adjust our plans accordingly again.”

Knoetze said: “While the fuel that’s in the pipeline is pure… we really warn the motorist and the retailers to not buy fuel from illicit traders, because after it’s left the pipeline, you don’t know what quality fuel you’re going to get.”

“Although we weren’t the cause of the spill [near Harrismith] — it was thieves tampering with the pipeline — we take full responsibility in ensuring that the whole area that’s contaminated is brought back to the same state it was before the incident,” said Knoetze.

Transnet is working with the DFFE and Department of Water and Sanitation and contracted Spilltech to put measures in place to contain and prevent the diesel from entering the river.

“This is a huge environmental spill,” said Koetze.

She added that Transnet had put containment measures in place in the Meul River and taken preventative measures further down where it flows into the Wilge River and into the Vaal Dam.

“The rehabilitation plan that we’ve put in place will make sure that it is cleared. And when we hand it back over, it will be as if it was before.”

Danie Visagie, a farmer in the area, said, “We are farmers and the environment is what we make our money out of so we are very concerned, but we are very impressed with the efforts from Transnet and Spilltech and at this stage, it’s just a waiting game.”

Tom van Rensburg, the Freedom Front Plus councillor for Mafube, told Daily Maverick he started receiving complaints on Monday from his community about smelling diesel in their water.

“The first [complainant] was a pastor and he said that morning [when] he took a shower he could smell something like diesel or paraffin in the water.”

Van Rensburg explained that there is an intake tower at the Wilge River, which takes the raw water from the river to a water treatment plant where it is cleaned and pumped into reservoirs.

Josie Ralebenya, the municipal manager of Mafube, said on Wednesday: “The results [of tests] show that there is no diesel contamination in our water, hence it is safe to use the water.

“We have cleaned the water purification plant and we will start pumping water today, which means water will be available from tomorrow morning.” DM