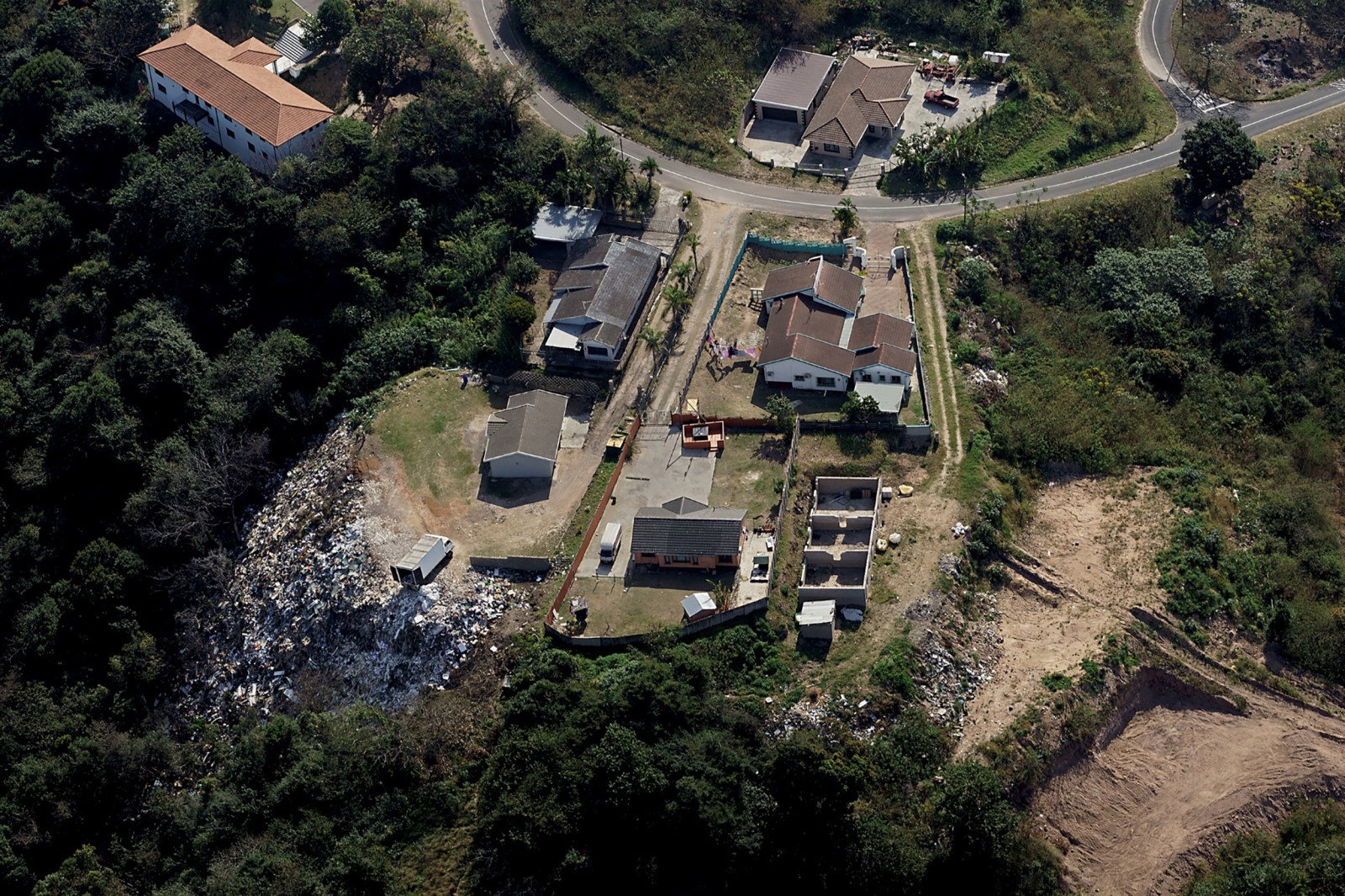 Newly excavated housing terraces are visible to the right of this illegal dumping site off Harinagar Drive in Shallcross, Durban. (Photo: Bateleurs Flying for the Environment)

A reconnaissance flight has revealed large-scale illegal dumping in a hilly terrain west of Durban, but the City appears to already be shifting responsibility.

The eThekwini Municipality is under pressure to prosecute at least two local landowners after an aerial reconnaissance flight revealed evidence of large-scale illegal dumping in hilly terrain west of Durban.

The backyard dumps were exposed by The Bateleurs, a group of pilots who volunteer their services at no cost to help with environmental custodianship projects across South Africa.

One pilot believes there are dozens of such sites across the city, but the two dumps he came across on a recent flight were “so in your face” that he decided to photograph and pinpoint the GPS coordinates in the hope that the City will take action against the culprits.

“I guess that one government authority after another will probably point at the next one and little will get done – but the tragedy is that these massive accumulations of mixed trash will eventually find their way into watercourses and the ocean,” said the pilot, who does not want to be identified.

“At this point, vast resources and numbers of people will be used to do reactionary clean-ups downstream. But it is a totally inefficient approach, compared with ensuring that one or two officials prosecute the offenders and put a stop to this scourge – at the source.”

The largest site, on a steep hillside above Inanda Dam, is located just off Ngwele Road near Hillcrest (GPS location 29°43’42.23”S   30°48’37.12”E). Aerial and satellite images from Google Maps suggest that this dump has been operating for quite some time, enabling the illegal disposal of building rubble and other unknown waste streams. The dump entrance is next to a Shembe (Nazareth Baptist Church) worship area, ringed by white stones.

The second site, close to 140/146 Harinagar Drive in Shallcross (29°53’27.82”S   30°53’0.30”E), appears to have been established more recently. It is also next to a steep hillside, not far from the uMhlatuzana River. The aerial images show evidence of new housing platforms being excavated nearby.

Our Burning Planet was not able to establish who owns the properties, but it sent copies of images, GPS coordinates and questions to the eThekwini Municipality last week.

Msawakhe Mayisela, eThekwini’s spokesperson, said City officials had not been aware of these dumps until alerted by Our Burning Planet. And, as predicted by the Bateleur pilot, the first round of jurisdictional buck-passing seems to have begun.

The dumping may be on private land but the images show the rubbish has spread onto what appears to be public land.

According to Mayisela: “Illegal dumping carries a maximum fine of R5,000 as per our 2016 waste by-law.

“However, if it is on private property and the dumping is out of control, the City’s environmental health department is asked to get involved and implement the Waste Act and fines. This can result in a fine much greater than R5,000 and up to R10-million.”

The accuracy of the by-law fines quoted by Mayisela are in question, though, since Section 54 of eThekwini’s waste by-laws provide for fines of up to R500,000 or imprisonment not exceeding three years.

Section 52 allows the municipality to publish the names and relevant details of any people convicted of illegal dumping offences on the City’s website, on noticeboards or in the media.

Mayisela said the City did not have information on the ownership of the land on Ngwele Road and Harinagar Drive, or whether any informal dumping fees were being collected.

The City has also disputed suggestions that the illegal dumping west of Durban has any connection with the impending closure of the Mariannhill site near Pinetown, one of the largest municipal dumps in that area.

The City announced two years ago that, as Mariannhill was nearing full capacity, it would only accept garden refuse, cover material and builders’ rubble – but not paper, plastic, packaging or food waste.

The City also erected a sign indicating that these prohibited categories of waste would have to be taken to the more distant Buffelsdraai dump near Verulam or the Lovu dump near Amanzimtoti.

Because these dumps are further away, customers were advised to consider the financial implications, such as higher transport costs or tariffs.

At the time, the City suggested this temporary arrangement was expected to last about two years (until 2022), when it hoped to open a new municipal landfill site at Shongweni, west of Durban. Now it appears that the new Shongweni dump is unlikely to open until October 2024 at the earliest.

Mayisela said the City collected refuse once a week from households, so there “should not be any reason for the citizens to illegally dump”.

“Businesses should have a signed contract with CSW or other authorised waste-removal companies. The onus still rests with the waste producers to ensure their waste is disposed of in a compliant facility.”

He said the City had also secured land to establish a new landfill site at Shongweni, which would provide services to the Hillcrest, Shongweni, Kloof, Waterfall and Inanda Dam area.

Although it was true that the Mariannhill site was restricting certain types of waste because of declining capacity, “there is no linkage between the usage of Mariannhill and the dumping happening in [parts of] eThekwini”.

“Illegal dumping is and should be a concern for every citizen… [This] is a misbehaviour of these individuals who are breaking the law and should be taken to task.

“The matter will be escalated to the environmental health department, since it is on private property outside the jurisdiction of CSW.” DM168