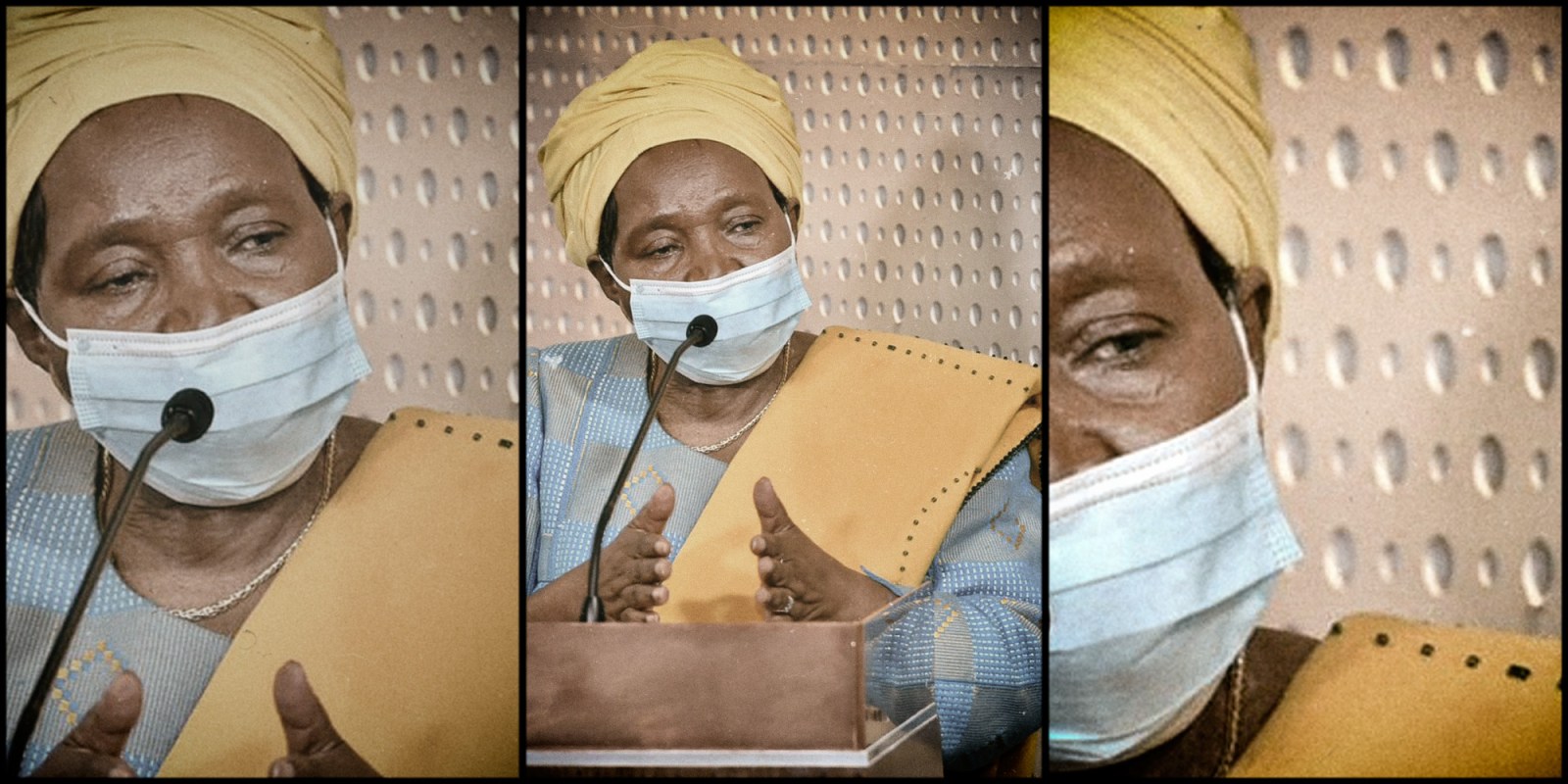 Minister of Cooperative Governance and Traditional Affairs, Nkosazana Dlamini-Zuma briefs the nation on regulations pertaining to the extension of the COVID-19 lockdown on 16 April 2020. (Photo: GCIS)

The decision by the government to extend the National State of Disaster for yet another month on Tuesday has been met with sharp criticism by health experts and political opposition. It is now scheduled to expire on 15 April 2022 – more than two years since it was first declared in response to the pandemic.

The National State of Disaster has been extended until 15 April 2022, Cooperative Governance and Traditional Affairs Minister Nkosazana Dlamini Zuma announced in a notice published in the Government Gazette on Tuesday.

This comes as the state of disaster was scheduled to end on Tuesday, 15 March, following promises from Cabinet last month that this would be the “final extension”.

The move was sharply criticised by the dean of the faculty of health sciences and professor of vaccinology at the University of the Witwatersrand, Shabir Madhi, who said the decision was “indicative of the NCCC being devoid of any understanding of the pandemic”.

Dlamini Zuma’s announcement comes after the National Coronavirus Command Council (NCCC) met on Monday to deliberate on alternative Covid-19 regulations, which will in effect replace the regulations as set out in the National State of Disaster, News24 reported.

However, the government is yet to finalise legislation that will come into effect to provide an alternative to the regulations implemented under the Disaster Management Act. Dlamini Zuma’s decision to extend the National State of Disaster is understood to have been a result of the failure of the NCCC to decide on new measures to manage Covid-19.

The 15 April extension takes “into account the need to continue augmenting the existing legislation and contingency arrangements undertaken by organs of state to address the impact of the disaster”, she said.

Disaster Management Act, 2002 (Act No 57 of 2002): Extension of a National State of Disaster #COVID19 pic.twitter.com/0zawptXIEs

Following a Cabinet meeting on Wednesday last week, Minister in the Presidency Mondli Gungubele said that while the government had “clear intentions” to lift the National State of Disaster, there was a need for caution to ensure that no vacuum was left in terms of measures to manage Covid-19.

Addressing the media, Gungubele held back on responding to questions about whether the state of disaster would be extended again or finally lapse on Tuesday.

Read in Daily Maverick: SA left to languish as deadline for ending (or extending) National State of Disaster looms

South Africa declared the National State of Disaster on 15 March 2020, and 23 March will mark two years since President Cyril Ramaphosa announced that the country would go into a 21-day hard lockdown, which began on 26 March 2020.

Two years on and South Africa is still in lockdown, albeit on Adjusted Alert Level 1, with the latest amendments to the regulations announced on 31 January. While the economy has largely opened, under Adjusted Level 1 regulations, restrictions on the number of persons at religious, social and cultural gatherings remain in place, and masks are still mandatory.

On 9 February 2022, Cabinet approved what it said would be the “final extension” of the Nation State of Disaster to 15 March, after it had been scheduled to end on 15 February.

The latest extension comes despite increasing calls from health experts, opposition parties and business associations to scrap the disaster regulations.

Responding critically on Twitter and elaborating in follow-up queries from Daily Maverick, Madhi said that it was “foolish” to still believe in regulations that are geared towards preventing infections.

Decision to extend SoD in SA indicative of NCCC being devoid of any understanding of the pandemic and flight of fantasy of what needs to be done without any clear goal in mind. Somehow foolishly still believes in being able to prevent infections. Predictable given it’s record

“Many of the regulations that currently exist under the National State of Disaster are geared towards trying to prevent infections from transpiring – or limiting the amount of infection that transpires – rather than focusing on the prevention of severe disease and death.

If anything, what the experience over the past two years has indicated is that all of these regulations have done very little when it comes to protecting people from being infected, because, had it had any impact, we wouldn’t have had 70% of the population infected with the virus at least once since the start of the pandemic,” Madhi told Daily Maverick.

Many of these regulations had “failed dismally” in preventing infections.

“What it might have achieved at a point in time, is that it might’ve drawn out infections over a longer period during the waves. That was important when we were trying to relieve pressure on our healthcare facilities.”

However, South Africa was no longer in that period.

“We’ve demonstrated quite convincingly in South Africa that these regulations have not prevented infections and the spread of the virus. In addition to which we now have 80% to 85% of the population that have developed protection against severe disease and death.

“Unfortunately, most of that has evolved because of natural infection-induced immunity, which is compounded by the use of vaccines… This has brought us into a space where we can convincingly say that we’ve done as much as can be expected to protect against severe disease and death – other than increasing vaccine coverage for people above the age of 50.”

Following Dlamini Zuma’s announcement, DA cooperative governance and traditional affairs spokesperson Cilliers Brink called the decision a “power grab”, which was made without explanation to the public.

“The DA takes note that the state of disaster and Covid-19 lockdown have been extended yet again. This, despite the fact that the Covid-19 pandemic in its current form no longer conforms to any reasonable definition of ‘disaster’, and scientists in South Africa and abroad have called for lockdown restrictions to be lifted,” said Brink.

The DA believed this move by Dlamini Zuma “is nothing but a power grab in order to continue to give ANC cronies and comrades easy access to Covid funds, and to trample upon fundamental constitutional rights”.

Western Cape premier Alan Winde also condemned the extension of the state of disaster, and called on Ramaphosa to provide an explanation.

“Despite having months to prepare alternative public health measures that would normalise our response while enabling us to focus on creating jobs, it seems that the national government has not yet finished the job. This is unacceptable, and President Cyril Ramaphosa owes South Africa an explanation,” said Winde.

AfriForum has also slammed the extension, saying it had started legal action in February to nullify the state of disaster. DM