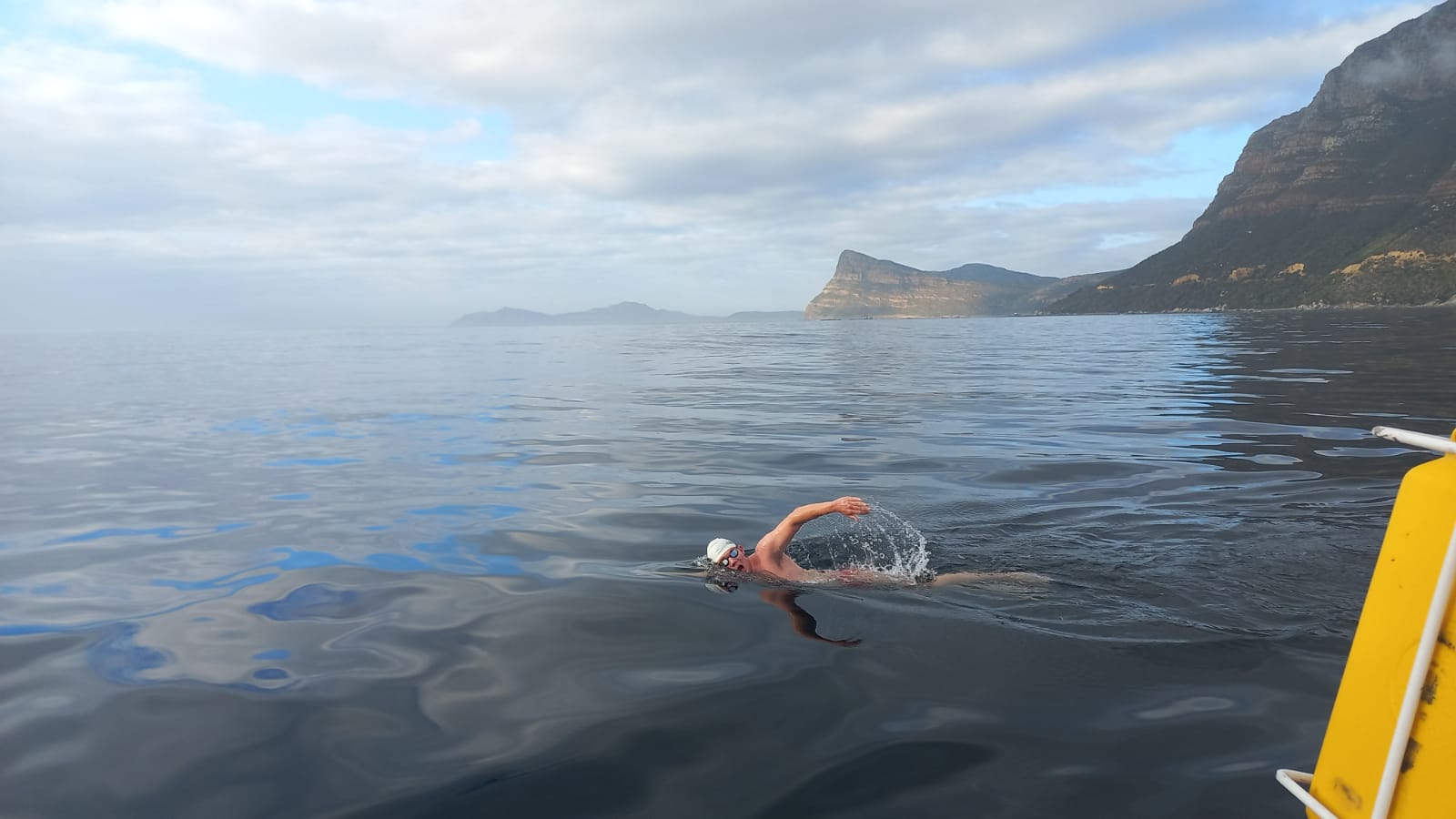 A 16-year-old boy has just smashed the record for what is fast becoming South Africa’s very own ‘English Channel’ – the icy, and toothy, 34km False Bay swim – and joined a very exclusive club in the process.

Joburg schoolboy Kyle Stephens should have been writing his IT and accounting exams that Tuesday morning. Instead, he was in the middle of the Atlantic Ocean surrounded by jellyfish and seals, watching the mountains at Millers Point slowly fade into the distance, and wondering why the faint outline of the mountains at Rooi Els was taking so long to get nearer.

Stephens knocked a whopping 30 minutes off the previous record of eight hours and 39 minutes, held by extreme athlete Ryan Stramrood, who has done 120 Robben Island crossings, some of them doubles, as well as ice miles in the Antarctic and a Bering Straits relay.

South Africans, it seems, are queuing up to tackle what some are calling “the African Channel”.

Other False Bay records have been set recently, including the oldest man to complete the challenge, Simon Ince (62), and the first two-person relay crossing, by Liberty’s head of wealth Georgina Smith and Business Results Group CEO Kirsty Thompson. The two women raised R50,000 for the Swim for Rivers charity, hearing only the night before their swim that a close friend and Swim for Rivers’ organiser Craig Doonan had died.

The first west to east crossing of False Bay was pioneered in March 2021 by a team of four women doing the first-ever women’s relay crossing, CLDSA committee member Kat Persson, Eva Dirksen, Georgina Smith and Karen Graaff in eight hours and 46 minutes. That paved the way for Stramrood and veteran swim skipper Derrick Frazer. Traditionally, swimmers swam the other way, but this resulted in so many unsuccessful attempts, says Frazer, that a new approach was needed.

“We could never explain why this was. We put it down to a mental thing – fear of sharks maybe. Swimmers always blamed the currents, but the boffins told us there were no real currents going that way in False Bay. Then, when the fear of sharks started receding, I realised we were swimming the wrong way,” says Frazer.

“To his credit, Ryan took this on board. And on the day of his swim the conditions were so miserable but, every time I looked down, this guy was making such good time. I normally never tell swimmers how they are doing, as you can’t get ahead of yourself on such a long swim. But at the halfway mark I told Ryan, ‘You’re in with a chance of setting a new record.’ And, by his own admission, Ryan is not as fast as the previous record-holder, Barend Nortje, but he just pushed on through and set a new record.”

Now a 16-year-old is the proud record holder. Stramrood, who swam Stephen’s first Robben Island crossing with him, says there are no sour grapes about losing his record.

“About a month after my own False Bay swim, Kyle approached me looking for a goal. We chatted and this set him on his course to be the youngest to do the crossing. He has always had my full support.

“My goal was to pioneer the west to east route across False Bay. Getting the fastest time across for someone of my pace was an unexpected bonus. But the greater part of my reward was to have effectively opened this route for all aspirant endurance swimmers and to inspire Kyle and others to action.

“Then to watch his dedication, his training, mental strength at a young age and his focus on this goal was inspiring and amazing. Huge congratulations to Kyle and a hearty welcome to a very exclusive club,” adds Stramrood.

In 35 years there were five successful False Bay crossings. In the last year there have been nine. That gives some indication of the growing popularity of open-water swimming in general, but also the Cape peninsula as a global swim destination in particular, says water events safety organiser Frazer.

Frazer says the distances are certainly similar but points out that swimmers acknowledge that the False Bay crossing is, all things considered, probably a bit easier than an English Channel crossing, mainly due to strong tidal surges in the North Sea as a swimmer gets close to the French mainland.

“You can see that the last 5km of the False Bay swim is tough, but all the swimmer has to do to reach land is keep swimming,” says Frazer. “It’s like a Robben Island – you could idle through to the shore doing breaststroke, and you would reach land. But on a Channel swim, the last two kilometres, you actually have to swim faster than those wicked currents, and that is just not always possible,” says Frazer.

He explains that initial consideration has been given to marketing a False Bay crossing as an eighth swim in what is currently called the Oceans Seven collection, due to its physical and mental challenge, the beauty of the location and the affordability of the swim.

“All of these open-water swimmers, once they have done a Robben Island or a Cape Point, they are immediately looking to do the next big swim. That’s the nature of these swimmers – adventurous and pioneering.”

But not everyone is convinced that False Bay has enough character and historical appeal for international swimmers.

South Africa’s first Triple Crown swimmer and international swim skipper Roger Finch says the False Bay swim is good for long-distance training, say for an English Channel attempt, but other destinations have more appeal, for example the Tsugaru Straits between the south and north Japanese islands, or the 20 Bridges Swim around Manhattan Island in New York.

“Overseas swimmers look at its difficulty. They look at swim tracks of past swims, and move on to a swim such as Tsugaru, which is less distance but swimmers jump at it. Why? Because it’s wild! A swim has to have something about it. Robben Island has the jail and Nelson Mandela. Alcatraz has the history and the jail – it’s a short easy swim, but very popular. The Manhattan swim around New York was established by the first woman to ever swim the English channel. It’s overbooked! Once again, character and history!” DM/ML