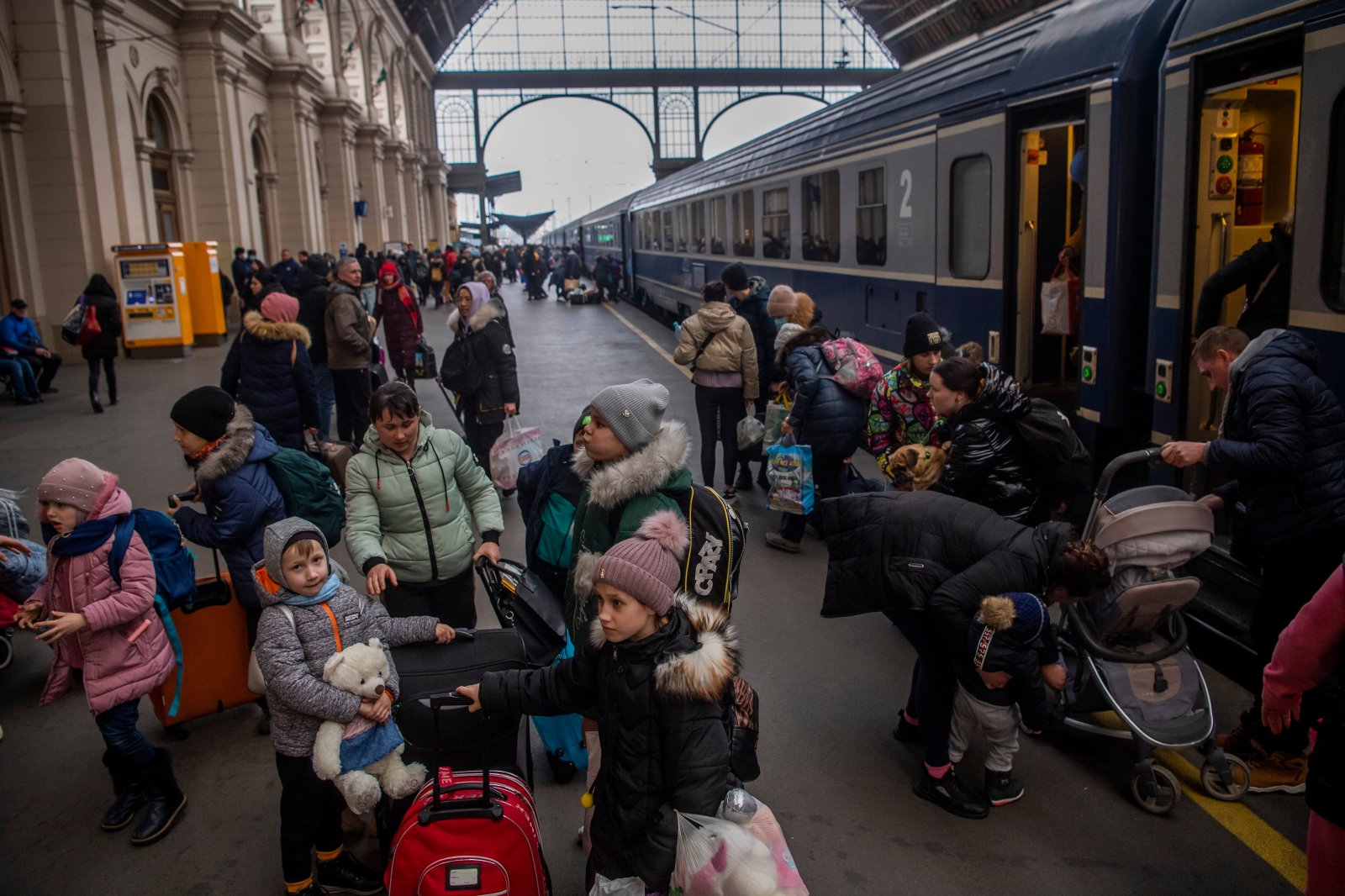 epa09808553 Refugees from Ukraine arrive at the Keleti Railway Station in Budapest, Hungary, 07 March 2022. According to the United Nations (UN), at least 1.5 million people have fled Ukraine to neighboring countries since the beginning of Russia's invasion on 24 February. EPA-EFE/Zoltan Balogh HUNGARY OUT

LVIV, Ukraine, March 8 (Reuters) - Ukrainians boarded buses to flee the besieged eastern city of Sumy on Tuesday, the first evacuation from a Ukrainian city through a humanitarian corridor agreed with Russia.

Ukraine said a separate convoy of 30 buses was also headed to Mariupol to evacuate residents from that southern port, which has been encircled without food, water, power or heat and subjected to relentless bombardment for a week.

The United Nations said the number of refugees who have fled Ukraine had surged past 2 million, describing the flight as one of the fastest exoduses in modern times.

The evacuations from Sumy to the city of Poltava further west began hours after a Russian air strike in Sumy, which local authorities said had killed 21 people. Reuters could not verify that report.

“We have already started the evacuation of civilians from Sumy to Poltava, including foreign students,” Ukraine’s foreign ministry said in a tweet. “We call on Russia to uphold its ceasefire commitment, to refrain from activities that endanger the lives of people and to allow the delivery of humanitarian aid.”

Dmytro Zhyvytsky, the governor of the Sumy region, said in a video statement that a second column of civilians would leave Sumy at around 1100 GMT. A short video clip released by presidential advisor Kyrylo Tymoshenko showed a red bus with some civilians on board.

Residents were also leaving the town of Irpin, a frontline Kyiv suburb where Reuters journalists had filmed families fleeing for their lives under fierce bombardment on Sunday. Residents ran with their young children in strollers or cradling babies in arms, while others carried pets and plastic bags of belongings.

“The city is almost ruined, and the district where I’m living, it’s like there are no houses which were not bombed,” said one young mother, holding a baby beneath a blanket, while her daughter stood by her side. “Yesterday was the hardest bombing, and the lights and sound is so scary, and the whole building is shaking.”

Moscow describes its actions in Ukraine as a “special operation” to disarm its neighbour and unseat leaders it calls neo-Nazis. Ukraine and its Western allies call this a baseless pretext for an invasion to conquer a country of 44 million people.

Western sanctions have cut off Russia from international trade and financial markets to a degree never before imposed on such a big economy.

Russia is the world’s leading exporter of oil and gas, and both Russia and Ukraine are major suppliers of grain and metals, creating concern the conflict could severely disrupt supplies and derail the global recovery from the coronavirus pandemic.

On Tuesday, London trading in nickel was suspended after its prices doubled to $100,000 a tonne as a result of supply concerns. Read full storyMKTS/GLOB

Establishing humanitarian corridors for evacuations and aid has been the main focus of three rounds of talks between Ukrainian and Russian officials in Belarus, the last of which was held on Monday.

Ukraine has rejected Russian proposals for Kharkiv and Kyiv which would see evacuees sent to Russia itself or its ally Belarus. Earlier attempts to evacuate residents from Mariupol failed on Saturday and Sunday, with each side accusing the other of continuing to fire.

Jens Laerke, spokesperson of the U.N. Office for the Coordination of Humanitarian Affairs (OCHA), said the United Nations was discussing humanitarian access with both sides, with a delegation in Moscow since Monday. To ensure safe passage, the sides would have to coordinate routes and timings of convoys.

Ukraine said the pace of Russia’s advances had slowed on Tuesday. Its defence ministry said Russian Major General Vitaly Gerasimov, first deputy commander of Russia’s 41st army, had been killed on Monday, the second Russian major general killed since the invasion began. Russia’s defence ministry could not be immediately reached for comment and Reuters could not verify the report.

Western countries say Russia’s initial battle plan for a rapid strike to topple the Kyiv government failed in the early days of the war, and Moscow has adjusted its tactics for longer sieges of cities.

The main assault force heading towards Kyiv has been stuck on a road north of the capital, an armoured column stretching for miles. To the south, Russia has made more progress along the Black and Azov Sea coasts.

Fears of an energy war between Russia and the West have grown this week, after Washington pushed its allies to ban Russian oil imports, so far excluded from sanctions.

U.S. President Joe Biden held a video conference call with the leaders of France, Germany and Britain on Monday. The United States is not a major buyer of Russian energy, but Russia supplies 40% of Europe’s gas, and European allies have indicated so far that they were unable to halt Russian energy supplies.

Russian Deputy Prime Minister Alexander Novak warned on Monday Russia could halt gas deliveries to Germany in retaliation for Berlin suspending a new pipeline. Oil prices could more than double to $300 a barrel if the United States and its allies banned Russian crude imports, he said.

A senior U.S. defence official said Putin had now deployed nearly 100% of the more than 150,000 troops that he had pre-staged outside Ukraine before the invasion.

Within Russia itself, the war has led to a severe new crackdown on dissent, with the last remaining independent media largely shut down last week and foreign broadcasters banned. Many foreign news organisations have suspended reporting from inside Russia after a new law was enacted imposing long jail terms for reporting deemed to discredit the military.

“I remain concerned about the use of repressive legislation that impedes the exercise of civil and political rights and criminalising non-violent behaviour,” Bachelet told the Human RIghts Council in Geneva via a video message.

By Pavel Polityuk and Natalia Zinets