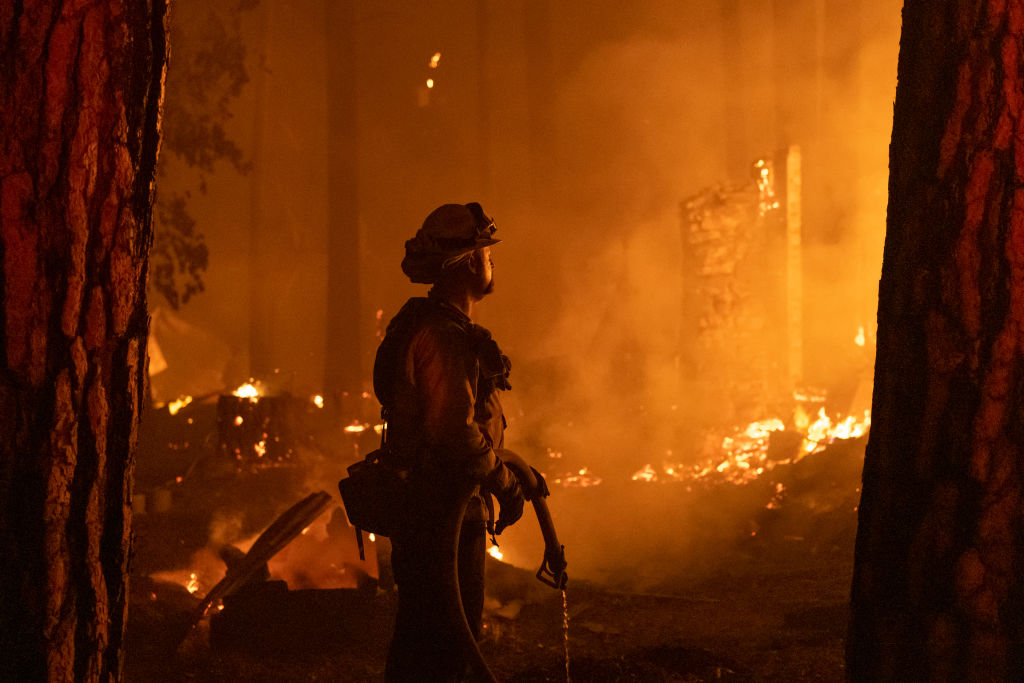 A firefighter monitors a fire as structures burn in the Indian Falls neighborhood near Crescent Mills, California on 24 July 2021. Global warming of 1.09°C has already caused widespread impacts globally. In the past several years, we’ve seen enormous wildfires sweep across Australia, Chile, the US and Greece. (Photo: David Odisho / Bloomberg via Getty Images)

The Intergovernmental Panel on Climate Change’s climate report stresses the importance of climate change adaptation and a reduction in greenhouse gas emissions.

Even if we manage to stop the planet warming beyond 1.5°C this century, we will still see profound impacts on billions of people on every continent and in every sector, and the window to adapt is narrowing quickly. These are among the disturbing findings in the latest report from the Intergovernmental Panel on Climate Change (IPCC).

At 1.5°C warming above pre-industrial levels, the new report projects that, for example, children under 12 will experience a fourfold increase in natural disasters in their lifetime, and up to 14% of all species assessed are likely to face a very high risk of extinction. This is our best-case scenario.

Impacts such as these will not be evenly spread, with countries in Africa, Asia and low-lying island nations set to be hit hardest. Yet these nations are among the least able to adapt.

We are three vice-chairs of the IPCC, and helped to guide the hundreds of scientists worldwide who authored this report. As the second in a set of three, this report gives the most up-to-date synthesis of what we know about the impacts of climate change, and how to adapt to them.

The previous report, published in 2021, confirmed Earth has already warmed by 1.09°C since pre-industrial times as a result of human activity.

Adaptation, such as through sustainable building development, can help humanity to manage the increasing risks. But adaptation alone will not be enough; it must be paired with a drastic and urgent reduction in global greenhouse emissions if we’re to avert the extraordinary crises that unmitigated planetary heating would bring.

As the peak climate science body of the United Nations and the World Meteorological Organization, the IPCC is the global authority on climate change.

Our new report paints a worrying picture of climate impacts already affecting the lives of billions of people, our economies and the environment, from the poles to the equator and from the tops of mountains to the ocean floor.

Global warming of 1.09°C has already caused widespread impacts globally. In the past several years, we’ve seen enormous wildfires sweep across Australia, Chile, the US and Greece. We’ve seen global, back-to-back mass coral bleaching events. And we’ve seen unprecedented heatwaves and cold events such as in British Columbia, Canada and Texas in the US.

Even if we manage to reduce global emissions and meet the Paris Agreement target of only temporarily exceeding 1.5°C this century, this could still have severe and potentially irreversible impacts, although less so than for higher temperature rises.

This includes species extinction, especially in low-lying islands and mountainous areas. Ice sheets will further break down in Greenland, West Antarctica and now even East Antarctica, raising global sea levels about half a metre or more by 2100.

Every small increase in warming will result in escalating losses and damage across many systems. For example, the report found:

Importantly, the interplay between these various impacts can potentially cascade into further risk.

The drought also reduced water availability for firefighting; the heat exhausted the firefighters in their protective clothing; and the fires generated their own fire weather, spreading the fire faster while also disrupting communications, power networks, and fuel and banking systems – all of which severely hampered the disaster response.

The fires also released huge amounts of carbon dioxide into the atmosphere, adding to warming and future fire risk.

Who will be hit hardest?

A key message from the report is how climate change increases inequities across the globe. Existing climate change impacts are already disproportionately hitting the poor and disadvantaged.

For example, reductions in food production have been greatest in those areas where poverty is already rife. This pattern is projected to worsen, with significant risk of large-scale food and nutrition insecurity.

Across Africa, for example, the report found climate change has already reduced agricultural productivity growth by 34% since 1961 – more than any other region on the planet. Further warming will shorten growing seasons and the availability of water. In particular, warming above 2°C will result in significant yield reductions for staple crops across most of the continent.

Climate change is also a dire threat to lives and livelihoods in small island nations, such as in the Caribbean and the Pacific. For example, the report found warming above 1.5°C will see up to 90% of tropical coral reefs severely damaged. This jumps to 99% of coral reefs for warming over 2°C. Many rely on coral reef ecosystems for their livelihoods, and this will contribute to climate-related displacement, which is expected to increase.

To rub salt into the wounds, developing nations, communities and people generally play only a negligible role in emitting the greenhouse gases driving the temperature up, with per capita emissions often only a 10th of those in developed nations.

To avoid the projected mounting losses, we require urgent, accelerated action to adapt to climate change.

There are adaptation options for every region and every sector. These could include removing houses and other infrastructure from floodplains to slow river flows and increase water retention, or improving building standards so our homes are suited to warmer climates.

But the more global warming that occurs, the fewer and less effective these options are likely to be. Thus, as climate change proceeds, there will be ever-tightening limits on our capacity to adapt.

For example, in many subtropical and mid-latitude regions, such as the Mediterranean, Chile and Mexico, hot temperature and drought conditions are likely to increase. Irrigation is obviously an adaptation option for high-value crops.

However, the likely lower water availability and increased demand across sectors will reduce water allocations, and constrain irrigation options. What’s more, the efficiency of water use will reduce under hotter, dryer conditions with lower relative air humidity. This means that, for a given amount of water, there will be less benefit to crop growth or even for other sectors, such as for cooling power stations.

Indeed, developed countries have agreed to mobilise $100-billion per year to finance adaptation and mitigation in developing countries. But while climate finance is increasing overall, it’s not enough to enable adaptation to keep pace with climate change. Only a tiny fraction (an estimated 4% to 8%) is targeted at enhancing climate adaptation – most is aimed at emissions reduction.

Even a well-designed and implemented global adaptation programme won’t fully address the increased risks from climate change, and so losses and damages are likely to mount.

Action we take to adapt to climate change will require parallel reductions in greenhouse gas emissions – adaptation cannot do it all.

Where possible, adaptation actions should simultaneously reduce net emissions, and reduce climate risk. Clearly, adaptations that increase emissions – such as turning on our air-conditioners if they use fossil fuel-generated electricity – are self-defeating.

Similarly, emission-reduction activities will increasingly need to adapt to the changing climate.

For example, higher temperatures and lower rainfall projected for southern Australia will lower the amount of carbon forests can soak up, because the forests’ growth rate will reduce and more fires will lead to greater losses.

Alongside enhanced fire management, choosing a mix of plant species that are adapted to a warmer climate could help to offset some of these effects.

It’s clear that reducing global emissions alongside effective adaptation will put us on a trajectory of lower costs and damages. But at a global level, we’re doing neither of these things to the necessary extent. We’re at risk of missing a brief and rapidly closing window to secure an equitable and sustainable future. DM168

Mark Howden is the director of the Institute for Climate, Energy and Disaster Solutions at the Australian National University; Joy Pereira is a professor at Universiti Kebangsaan Malaysia; Roberto Sánchez is a professor at Colegio de la Frontera Norte.