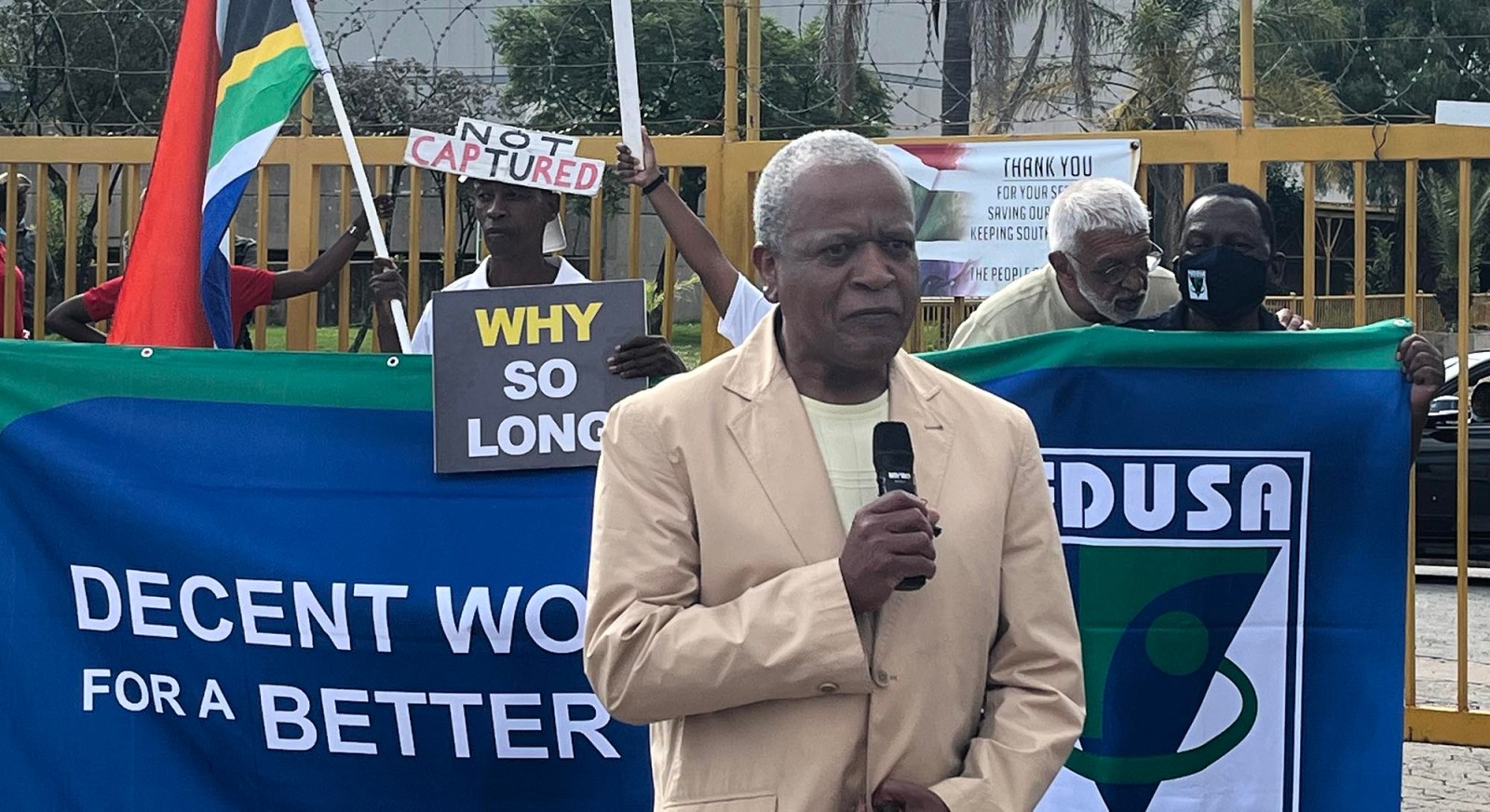 David Makhura’s spokesperson says the SIU has been called in to investigate possible irregularities and corruption in tenders for the repair of Charlotte Maxeke hospital. Not so, says the SIU, which insists the hospital does not form part of any current probe.

On Friday afternoon, Thabo Masebe, the acting DG in the Office of the Gauteng Premier, attended a picket outside Charlotte Maxeke Johannesburg Academic Hospital (CMJAH). The picket had been called by the Open CMJAH Now coalition to protest against the continued closure of a large part of the hospital and to demand answers and timeframes.

Specifically, it had gathered to hear a response from Premier David Makhura to a memorandum that had been handed over on 20 February.

Masebe arrived late and without any other officials or politicians from the Gauteng government. Gladys Bogoshi, the CEO of the hospital since 2013, is on leave. The MEC for Health, Dr Nomathemba Mokgethi, is generally missing in inaction.

Masebe took up a position in front of the media cameras and began a predictable monologue of excuses, but he was interrupted by activists who drew parallels with the Life Esidimeni disaster and demanded that he address the list of questions in the memorandum and respond to protesters’ questions directly.

Sheepishly, he agreed. He apologised on behalf of the premier for not responding to the memo by the 1 March deadline, saying he would still personally respond within 48 hours and give more details than in his response to the protest.

But significantly, in his off-the-cuff responses, Masebe went far further than the spin in admitting that probable corruption lay at the heart of the delays to fixing the hospital, than any of the spin given hitherto.

Masebe put much of the blame on the Gauteng Department of Infrastructure Development (GDID), whose conduct he says “looks corrupt”. Confirming what we have heard from sources, he told the small crowd that the GDID had tabled quotations to fix the hospital’s six blocks for more than R1-billion – an amount that the Health Department had “disputed”.

In this context, he reported suspensions of six officials from the GDID and six from the Health Department (previously it was reported that nine people had been suspended), people he said, “we would have relied on to fix the hospital”.

Masebe says that the provincial government has called in auditors to look at the contracts. “Once they are done we will make their report public. We have nothing to hide.”

Admitting that “we strongly suspect there must have been irregularities” (as previously reported by Maverick Citizen here and here) he said that the premier’s office had referred the GDID to the Special Investigating Unit (SIU), claiming that an investigation into the GDID “should be covered by the existing Proclamation (23 of 2020), but that if not we will approach the president”.

But, he said that their concerns went beyond Charlotte Maxeke and the AngloGold Ashanti hospitals: “We want to know about all the other infrastructure projects.” By this, we hope Masebe is referring also to the dodgy contracts into the ABT Field hospitals, that Maverick Citizen exposed more than a year ago and which the Attorney-General has already found did not follow proper procedures.

However, approached for comment this weekend, Kaizer Kganyago, spokesperson for the SIU, contradicted Masebe, saying: “Charlotte Maxeke is not one of the hospitals we are investigating. The other five hospitals are almost done.”

* Maverick Citizen has requested the names of the other five hospitals and will publish them once we are informed by the SIU.

Finally, on the specific issue of fixing the hospital, Masebe also made some important commitments, including:

Masebe also claimed that the reason the Gauteng government had stopped publishing its monthly expenditure disclosure reports in January 2021 was because “of problems with personal information” that was in violation of the Protection of Personal Information Act (Popia). When challenged about this he promised to check with the Treasury and report back.

They see the fire as an accident (if it was not arson, something that is still being investigated) waiting to happen and just the last in a long and unchecked period of mismanagement of this and other public hospitals in Gauteng. Some worry that if all Gauteng’s hospitals were subject to fire checks, they would all be closed.

But fire risk is not the only problem facing these hospitals.

Professor Daynia Ballot from Wits University says the university has been “horrified at the unsafe and unsanitary conditions that the dental school operated in. Sewage leaks, lack of ventilation, no fire compliance etc. Yet all [Gauteng Department of Health healthcare workers] work in worse conditions every day. I have been in CMJAH where the sewage leaks are so bad that the whole hospital was full of stench. We had sewage dripping on to one of our neonatal ICU beds.”

To which another senior hospital ICU head responded: “I honestly have to say welcome to the daily real world of all public hospitals.” DM/MC

NEWS FLASH: Kaizer Kganyago, spokesperson for the SIU, on Monday confirmed the names of the five hospitals in Gauteng that are the subject of an ongoing investigation by the SIU as part of its Covid investigations under Proclamation 23 of 2020. They are Kopanong Hospital, George Mukhari Academic Hospital, Chris Hani Baragwanath Hospital, Tshwane District Hospital and Jubilee Hospital. Kganyago said the investigation was “almost done” but could not give a date by when the investigation would be concluded or a report issued to the President. Although the focus of investigation has not been confirmed by the SIU, these five hospitals were all the sites for controversial ABT Field ICUs, originally meant to provide extra capacity for the first wave of the Covid-19 pandemic. Some are still not complete. By third quarter 2020, their expenditure topped well over a billion rand, but became impossible to track after the Gauteng government stopped publishing its monthly expenditure disclosure reports in January 2021. The irregularities were reported exclusively by Maverick Citizen, but denied by the Gauteng Department on Infrastructure Development at the time. We welcome the news of this investigation and will continue our own enquiries.