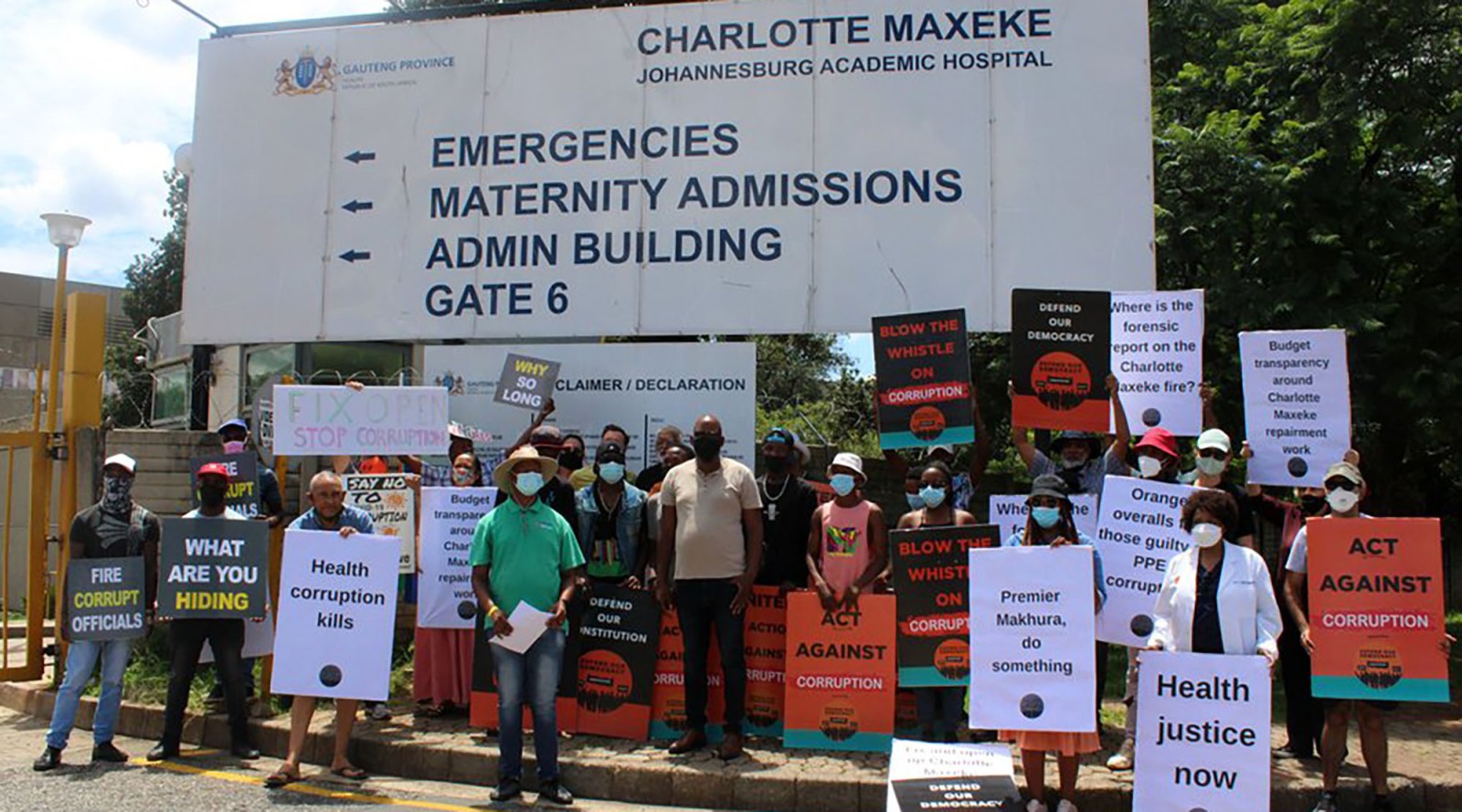 Two weeks after the Gauteng government held a media conference to announce its plans for the repair of Charlotte Maxeke Johannesburg Academic Hospital, medical staff report little evidence of progress and patients continue to bear the brunt of mismanagement.

Prof Adam Mahomed, the Head of Internal Medicine at Charlotte Maxeke Johannesburg Academic Hospital (CMJAH), says there is an “ongoing sabotage” of efforts to get more sections of the hospital up and running.

Parts of the facility were gutted when a fire broke out on 16 April 2021. Damage was estimated at R40-million.

In recent days, despite the presence of security employed by the hospital and Solidarity Fund in different parts of the facility, there has been theft of copper piping and more than 500 metres of electrical cable and new electrical distribution boards from inside the hospital.

This has further delayed the reopening of the critical Casualty section. The thefts have been reported to police. However, attempts to confirm this with hospital CEO Gladys Bogoshi were unsuccessful as she is on leave outside the country.

“It’s as if someone wants the hospital to remain closed,” a source told us, adding that “the Gauteng Department of Infrastructure Development (GDID) continues to interfere”.

The role of the GDID in health facility-related corruption still needs urgent investigation, according to a coalition of activists who have called on the premier to ask the Special Investigating Unit to probe the GDID.

The modus operandi of corrupt officials in the GDID is likely to be the same as that revealed by the SIU during its investigation into the AngloGold Ashanti Western Deep Levels Hospital (see its final report). There, it was found that “the Framework for Infrastructure Delivery and Procurement Management, NT Regulations and Practice Notes, the PFMA, SCM Practice Notes and GDID SCM Policy for Infrastructure Procurement and Delivery Management prescripts were not followed in the appointment of [22] professional service providers and contractors”.

As a result of these findings, on 13 February it was reported that the Gauteng government had suspended nine officials from the health and infrastructure departments. However, Vuyo Mhaga, a spokesperson from the Office of the Premier, on Thursday declined to name these officials, saying only that “lawyers are appointed to prepare charge sheets… we can only provide names after they receive their charges and what they are charged for”.

In addition, the Special Tribunal confirmed that it is due to hear an application to review and set aside these contracts in August 2022.

In the past, similar findings have been made by Maverick Citizen, in our investigation into the four Alternative Building Technology hospitals that were commissioned in the earliest days of the Covid-19 pandemic.

Sources, too afraid to be identified, talk about grossly inflated quotes being proffered by the GDID for the repair of Charlotte Maxeke. Others point to scams involving the health department, where goods are ordered at wildly inflated prices but stolen after delivery — “the whole storage facility is cleaned out” — before the same goods are reordered from the same supplier (who stole them after the initial delivery).

It was because of this mismanagement, and rumours of corruption, that on 9 February 2022 the Gauteng premier took the unusual step of issuing a proclamation transferring responsibility from the GDID to the health department (reported here). In his State of the Province speech, David Makhura was honest in saying that:

“The decision to remove DID as the implementing agent is the outcome of the failure to deliver on time and huge concerns on over-pricing for the refurbishment and construction work [at Charlotte Maxeke].”

However, almost as soon as responsibility for CMJAH was received by the Gauteng health department, it was passed on to the national health department and the Development Bank of South Africa (DBSA).

Since then, according to health workers, there has been next to no feedback about what is going on. The South African Medical Association says that its members who work in the hospital have been told not to speak to the media.

On Thursday, the premier’s office responded to the question “whether any contracts for the repair of CMJAH have been entered into? If yes, with what companies, for what repairs/services and for what amount?”

They replied only that “DBSA has been appointed as the new implementing agency through an existing MOA with the National Department of Health.”

Foster Mohale, spokesperson for the National Department of Health, confirmed that “responsibility of the hospital has been formally handed over to NDOH through a signed proclamation letter”. He added that the project manager is now Ayanda Dakela, head of Health Facilities and Infrastructure Management.

Enter Gift of the Givers

There is one ray of light.

Dr Imtiaz Sooliman from Gift of the Givers (GOTG) told us that “GOTG’s engineering team has now been given the go-ahead to assist the hospital with a structural assessment of the damage caused by the fire”.

“He reported positively on the cooperation of the national health department and the hospital’s CEO, saying “There has been a real change in the approach of CMJAH since new people were mandated to get the process moving forward.”

Sooliman praised Dakela as “an outstanding government employee who should have been put in charge 10 months ago. He is cooperative, flexible, easy to deal with, efficient, an excellent communicator and focused”.

In addition, says Sooliman “the City of Johannesburg had agreed to issue a compliance certificate and fire certificate even if a block was done at a time and the specifications were adhered to, which meant that block could open for patient management”.

But despite this, according to Sooliman, “the only way the process could go forward is if there is a proper engineering assessment of the entire block 4 and 5 (the stores affected by the fire), including lab results on concrete testing”.

Maverick Citizen understands that this report, costing R5-million, is being paid for by the Solidarity Fund, but will take up to four months to complete.

In the meantime, GOTG is providing an assessment report of what it will cost “in keeping with structural compliance and fire certificate” to renovate an old 3,000m2 dining room, urgently needed by the hospital as a replacement storeroom.

“From there onwards, once we have that cost and the cost from the block 4 and 5 engineering report”, renovations and repair work can proceed.

From Sooliman’s comments to us, it’s clear that although there is progress and will, the process has a long way to go. In his words: “We need to get this very vital facility reopened yesterday, as the suffering of patients is immense and can never be quantified.”

In the face of ongoing delays, health workers are despairing and the health department is not saying what contingency arrangements and budgets it has in place to alleviate their pain.

Prof Shabir Madhi, Dean of the Health Sciences Faculty at Wits University, says the hospital is working at less than 50% capacity (not the 70% claimed), mainly because the Casualty unit is the main entry point for admission.

He describes its impact on teaching, pointing out that where eight to 10 students were previously assigned to a bed, there are now 20-25, something that is grossly unfair on both patients and students. Last year, the dental school was closed for four months and students will only complete their studies in April this year.

To sustain pressure on government, an “Open CMJAH Now” coalition has been formed. It includes the TAC and the Cancer Alliance, trade unions and doctors. The coalition emerged from a picket of the hospital by the Defend Our Democracy campaign on 20 February which handed over a memorandum with a set of demands and questions that the premier has yet to answer, even though a deadline of 1 March was set. A second picket is being held at 3pm on Friday at the hospital. DM/MC