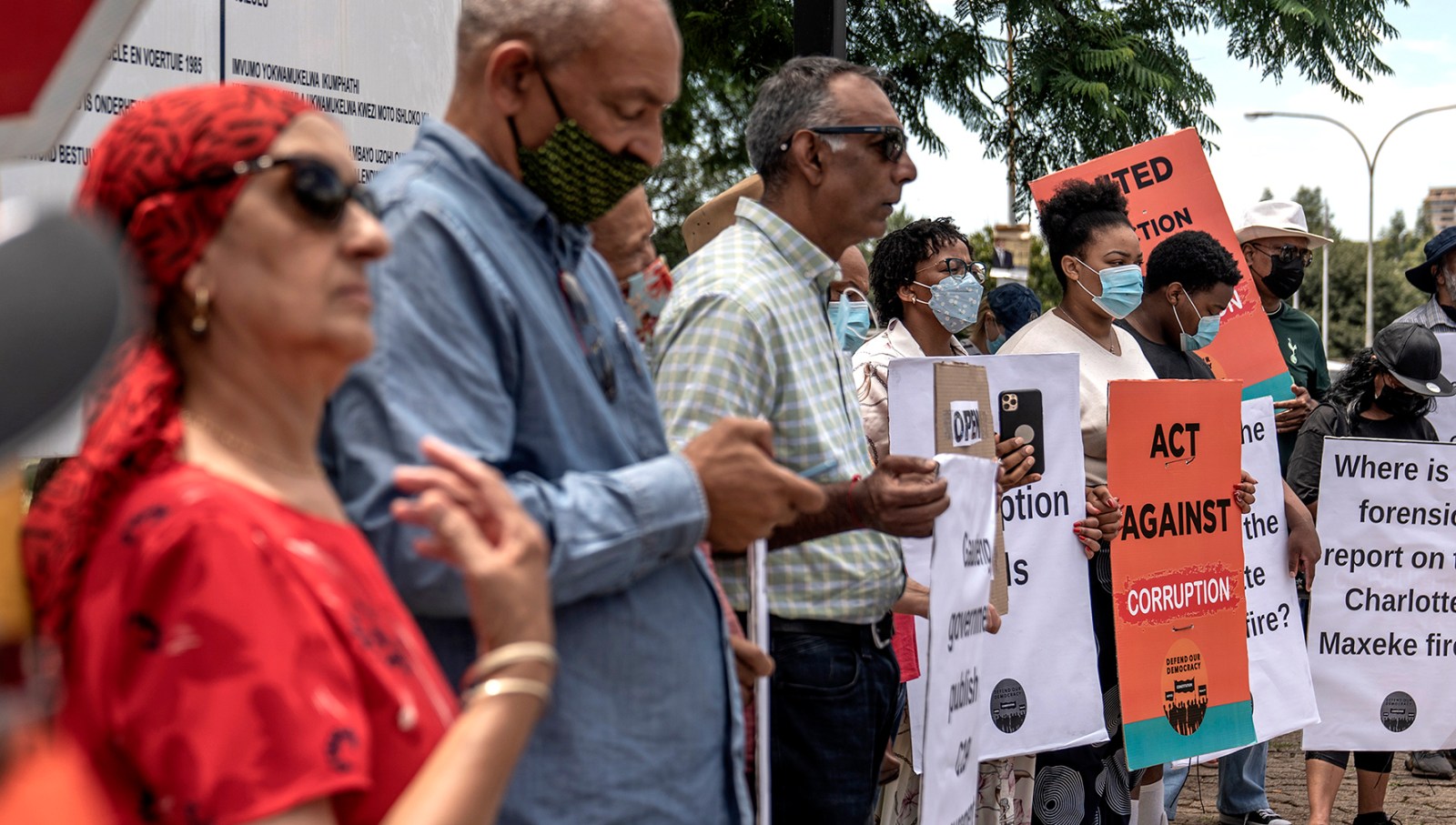 The Defend Our Democracy campaign is deeply concerned about the delays in the repairing and reopening of Charlotte Maxeke Johannesburg Academic Hospital following the April 2021 fire that seriously damaged parts of the facility.

On Sunday, members of Defend Our Democracy, a campaign that aims to mobilise South Africans against corruption, picketed outside Charlotte Maxeke Johannesburg Academic Hospital’s main entrance in Parktown, Johannesburg. They were protesting against the delay in the refurbishing of the hospital after the April fire that damaged parts of the hospital and led to the temporary closure of the institution.

Dr Fazel Randera, convenor and secretariat member of the Defend Our Democracy campaign, said: “We know tomorrow is when the premier, David Makhura, makes his… [State of the Province Address] and we want the repairing and reopening of Charlotte Maxeke hospital to be prioritised in his address.

“Hence, we are here today expressing strongly why this hospital should be opened as soon as possible. It’s been 10 months since the fire. When I… go around Rosebank, Melville and Yeoville, buildings are [going] up within six months. What is it that can’t be fixed in Charlotte [Maxeke hospital] besides the increasing maladministration… in various sectors of the government?

“We know that the Department of Infrastructure Development was given the responsibility, but still we are not seeing any progress. Increasingly, we are saying that it is impacting the lives of ordinary patients who rely on medical care offered at the hospital.”

Professor Rudo Mathivha, the head of ICU at Chris Hani Baragwanath Academic Hospital, said Charlotte Maxeke hospital provides quaternary services that other hospitals do not provide. Its closure has had a knock-on effect on the general healthcare services rendered in the cluster hospitals that now have to absorb additional patients.

“We cannot have cardiac patients that need their surgery to be waiting for 10 months and almost a year with those services out of the system. We are going on for almost a year with the trauma unit closed and those trauma patients backing up at Chris Hani Baragwanath Hospital and Helen Joseph.

“There are the medical oncology patients that need to come and collect medication, where do they go? Chris Hani Bara, Helen Joseph… Daily, these trauma patients and internal medicine patients do not have beds in those wards and we have to hustle every day to see who can be prematurely discharged for the new incoming patients. At the same time [we are] dealing with the 4th wave of Covid-19… this started long before the fourth wave.

“There is collateral damage; Chris Hani Bara and Helen Joseph have to absorb the extra patients and in the process run out of medication. They then have to come and negotiate with Maxeke to provide extra medication and then there is a whole bureaucratic take.

“When you go to the Gauteng Department of Health they have no plan nor are they aware that this is happening. Then management at Charlotte lie and say they are doing daily visits to their cluster hospitals and planning with them and deploying additional staff to every hospital.

“This is where the lies start…  we don’t have plans for the hospital, we have to scan the buildings to get a 3D idea of how this hospital was built. Now, this is not Chris Hani Baragwanath that was built during the Second World War, that you can understand when they say they don’t have the plan. Maxeke was built much later…

For Professor Shabir Madhi, dean of the Faculty of Health Sciences and professor of vaccinology at the University of the Witwatersrand, corruption and more lies continue to stall the repair of Charlotte Maxeke hospital, causing further disruptions to healthcare service delivery in Gauteng. Madhi says this has roots in the state’s mismanagement and maladministration of funds.

“What we are facing is a massive failure of the state to do something. So there have been several excuses made as to why Charlotte is still closed, including that of shortage of funds. The state has the funds… not so long ago R500-million was spent instead of R50-million to renovate a facility of Goldfields hospital to make it an ABT facility that will never be used for any meaningful purpose. That money or part of it could have been invested in repairing Charlotte,” said Madhi.

SECTION27 and the Treatment Action Campaign have come out in support of Defend Our Democracy’s campaign. The campaign has invited more organisations and individuals to join.

Sasha Stevenson, head of health at SECTION27, says it is up to the people to have Charlotte Maxeke hospital repaired and reopened. She says this can only be done by making sure the issue is in people’s faces.

“According to the Constitution, everyone has a right to access healthcare services and the state must use its available resources to realise that right. But what we see with Charlotte Maxeke hospital being closed for so long echoes the failure of the state to do just that.

“The property serves a thousand lives yet it remains in a state of stasis. Sitting in the Life Esidimeni inquests I have witnessed former Gauteng Department of Health officials deny any responsibility and pass blame. Fortunately, some of those members are not in the department any more, but that culture of buck-passing doesn’t seem to have stopped. If we don’t start requiring real action from the officials then we will have Life Esidimeni daily,” said Stevenson.

The Defend Our Democracy campaign memorandum calls on the Gauteng provincial government to:

The memorandum was received and signed on behalf of the Gauteng Department of Health by Thokozani Langa, senior manager of Stakeholder Engagement at the department. DM/MC