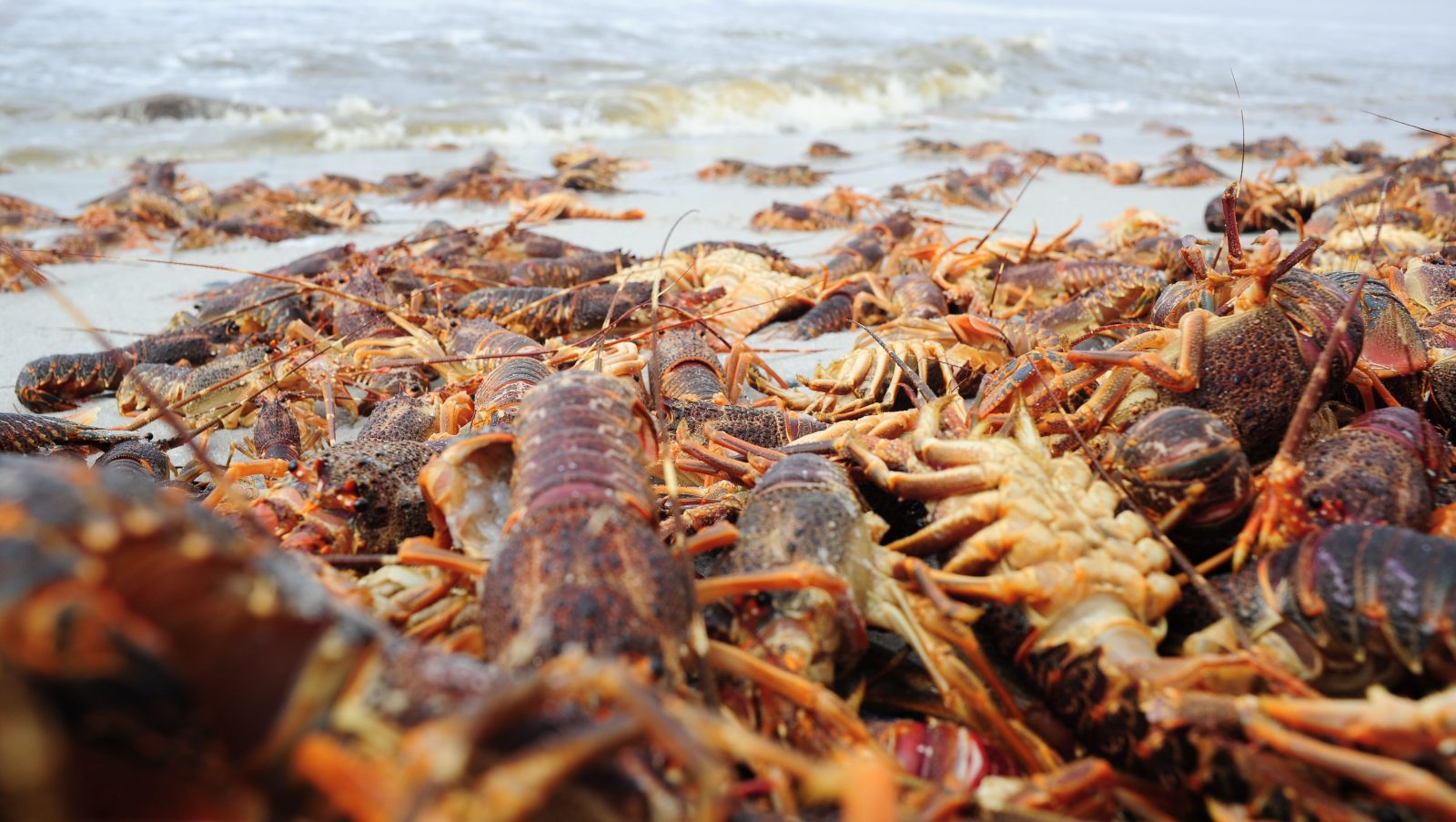 Lobster at Elands Bay on the West Coast. Photo: Supplied

Following an algal bloom – commonly known as a red tide – on the West Coast of the Western Cape, an estimated 500 tons of rock lobsters walked out of the sea this week.

The shores of Elands Bay on the West Coast were covered with thousands of crayfish this week after a massive algal bloom – more commonly known as a “red tide” – forced a massive walkout of the critters.

A joint operation has been launched to help rescue the surviving crayfish and get them back out to sea.

A statement released by the Department of Forestry, Fisheries and the Environment (DFFE) estimated that some 500 tons of the crustaceans filled the beaches. While the sight of thousands of crayfish may seem exceptional, the cause of the walkout is anything but.

Following the harmful algal bloom (Red Tide) that has been developing in the West Coast, the department has activated the West Coast Rock Lobster Contingency Plan and issued a Situation Red Alert, placing all government role-players, in the sector, on standby. #RedtideElandsBay pic.twitter.com/SwGwxHjqtq

“Red tides are a natural phenomenon in coastal waters, caused by a dense accumulation of microscopic algae. Some of the algal species are harmful because they contain toxins, which are poisonous to humans,” said the department.

“Poisoning may either take place through the consumption of seafood that is contaminated by toxic algae, or by toxic aerosols or water-bound compounds that cause respiratory and skin irritation. Other red tides cause harm through the depletion of oxygen [anoxia], which affects all marine creatures and can lead to mass mortalities of the entire marine communities or mass walkouts of rock lobsters that try to escape the anoxic conditions.

“As it is often the case in summer and late summer, there has been a build-up of large red tides in the greater St Helena Bay region over the past few weeks. These blooms of phytoplankton presently extend 50-60 kilometres, dominating waters in the vicinity of Elands Bay, Lambert’s Bay, and Doring Bay.”

Red Tides are a natural phenomenon in coastal waters caused by a dense accumulation of microscopic algae. Some of the algal species are harmful because they contain toxins, which are poisonous to humans. #RedtideElandsBay pic.twitter.com/AvKr2gHfPG

In response to the situation, the DFFE activated the West Coast Rock Lobster Contingency Plan and issued a Situation Red Alert. Working with the West Coast District Municipality, Cederberg Municipality, the police, defence force, provincial authorities and local communities, the department has been assisting with clean-up operations and the recovery of live rock lobster, washed up due to the red tide.

“All recovered live lobster will be rehabilitated and will be safely returned to sea once the red tide threat has abated,” the department said.

In a series of posts on Facebook, local fishermen can be seen throwing what would potentially be a great haul back into the icy depths.

This is not the first time a mass walkout has occurred in the area. In 1997 and 2000, hundreds of tonnes of the crayfish were stranded on the Elands Bay shore.

The DFFE has cautioned members of the public not to collect and consume any decayed fish and shellfish washed ashore as a result of the red tide as this could pose a serious health hazard. OBP/DM

Additional edits were made to this article following initial publication.