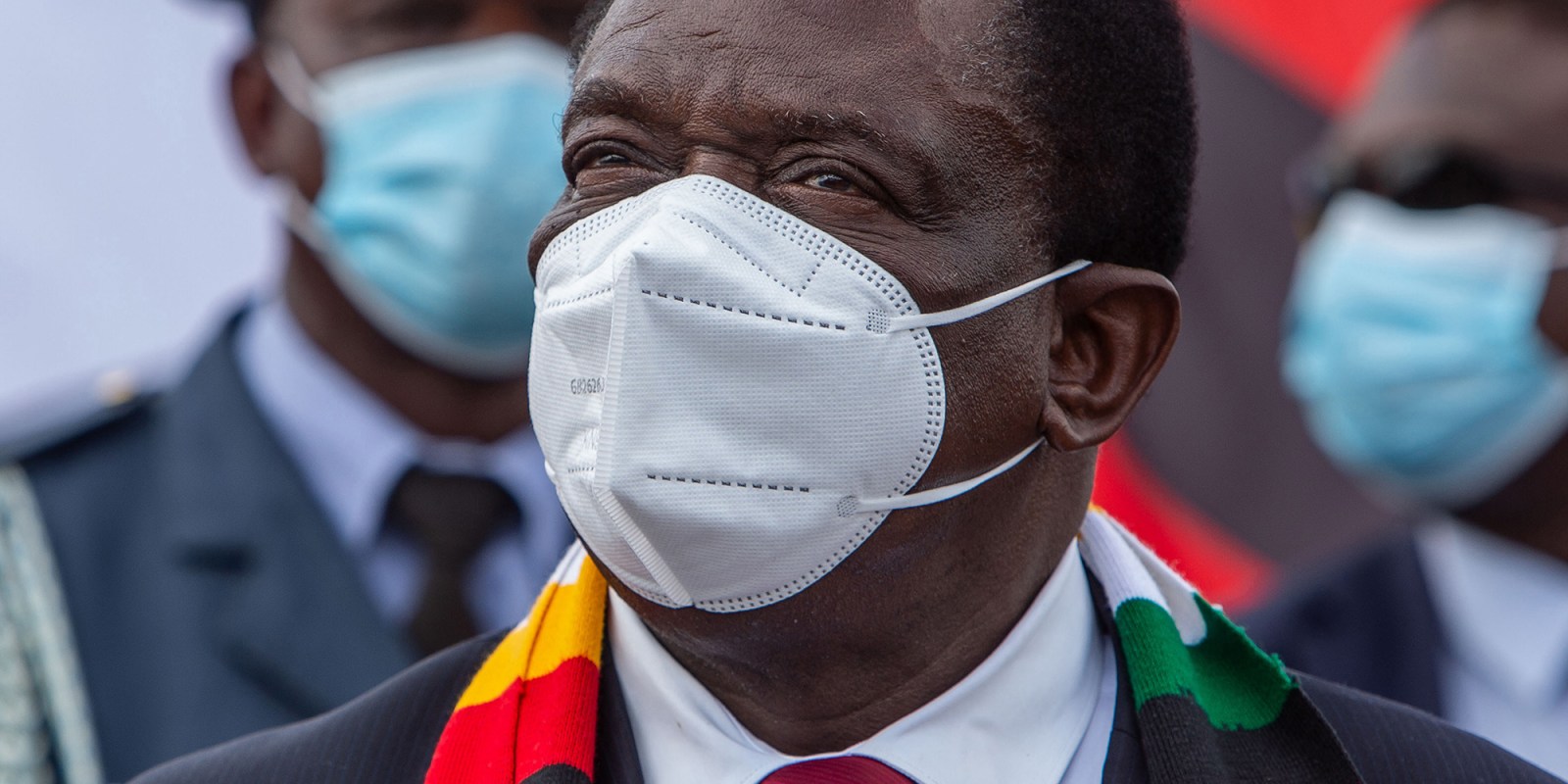 HARARE, ZIMBABWE - MARCH 16: Zimbabwe's President Emmerson Mnangagwa during the arrival of the shipment of Sinovac and Sinopharm vaccines from China at Harare International Airport on March 16, 2021 in Harare, Zimbabwe. Today's shipment is in addition to a batch of 200,000 doses of donated Sinopharm Covid-19 vaccine received last month. Zimbabwe is one of a dozen African countries to receive donated vaccines from China. (Photo by Tafadzwa Ufumeli/Getty Images)

In papers filed in Zimbabwe’s Constitutional Court, lawyer Tapera Sengweni and three other joint applicants said President Emmerson Mnangagwa acted unconstitutionally when he announced on December 24, 2021 that by-elections to fill vacant parliamentary and council seats would be held this month, arguing that the proclamation was done out of time.

The Constitution as read with the country’s Electoral Act stipulates that proclamation of by-elections should be done within a period of 90 days from the date of the seats being declared vacant.

In his founding affidavit, Sengweni also argued that there was no provision in the Constitution for a “general” by-election covering the 28 parliamentary constituencies and 121 council seats as intended by Mnangagwa’s proclamation.

“The time set by the Constitution of the country for the holding of by-elections is mandatory and compulsory,” reads part of the affidavit.

Sengweni also argued that the poor performance of the country’s economy did not create a conducive environment for holding by-elections, saying it was a waste of taxpayers’ money.

“As a small country, Zimbabwe has financial challenges that are affecting the greater majority of its population. The government is struggling to pay its employees a living wage. It is not prudent to drag the country into another election plebiscite whose outcome does not change the numerical configuration of Parliament in any way,” added Sengweni.

The lawyer and his co-applicants want the Constitutional Court to defer the by-elections to next year when general elections are due.

“In any event, there is really no need for by-elections now. The country is due to hold its harmonised elections in 16 months. It is prudent to wait for that date.”

The seats fell vacant after a splinter faction – Movement for Democratic Change-Tsvangirai (MDC-T), led by Senator Douglas Mwonzora – of the main opposition party, Movement for Democratic Change (MDC), recalled elected members loyal to Nelson Chamisa’s MDC from the National Assembly and several municipalities following a Supreme Court judgment that Chamisa’s ascendancy to the leadership of the opposition violated the party’s constitution.

Following the fallout with Mwonzora and his group, Chamisa announced the formation of a new party, Citizens Coalition for Change (CCC), on January 24.

The spokesperson for the CCC, Advocate Fadzayi Mahere, alleged that the Constitutional Court application was sponsored by Mwonzora after he realised that his party would be trounced in the upcoming by-elections on March 26.

“We are aware that Sengweni is Mwonzora’s legal adviser and Mwonzora is quite aware that we are going to defeat him in these elections; that is why Mwonzora has sponsored this application,” alleged Mahere.

“As CCC, we have said it time and again that the power to elect leaders rest with the people, not the courts. The Constitution is very clear that people have a right to choose their leaders.”

Mwonzora was, however, quick to distance his MDC-T party from the court application.

“The MDC-T has neither filed nor sponsored any court application to stop by-elections. The application being circulated has been filed by a group of four Zimbabweans. We do not interfere with Zimbabweans seeking to assert their rights.”

Meanwhile, the ruling Zanu-PF’s information director, Tafadzwa Mugwadi, told Daily Maverick that his party would continue with its election campaigns while it awaits the court’s ruling on the application.

“The opposition has all along been alleging that Zanu-PF is afraid of losing in these by-elections, hence President Mnangagwa was not calling for the by-elections. Now that these dates are available, they are coming up with all sorts of excuses such as electoral reforms and these court applications, but we are not going to have any of that.

“We are going to continue with our campaigns so that we build this country, together with people who are ready to work for this country, while we wait for the courts to make their decision, because our courts are independent and we don’t interfere with their operations,” said Mugwadi.

Harare-based political analyst Itai Zimunya thinks that Mwonzora and the Mnangagwa administration were working together to frustrate Chamisa after huge crowds attended his recent campaign rallies.

“The permutations are broad here. It won’t be shocking that they will set up special commissions in councils and stop elections to make sure that the voters’ roll remains unknown towards the 2023 elections.

“Violence on [the second vice-president of the CCC] Tendai Biti [his house was attacked on Wednesday night by unidentified men with guns and axes, leaving his security guard injured] and this court case are part of Mwonzora and Zanu-PF’s strategy to stop the Citizens Coalition for Change, but the tide will only rise,” said Zimunya.

Mwonzora used the courts and armed police to take control of the MDC headquarters while Chamisa was left to operate from the streets with no office. Mwonzora’s camp is also receiving the opposition’s share of funds distributed by the government under the country’s Political Parties Finance Act to political parties that have a threshold of at least 5% representation in Parliament.

Mnangagwa told thousands of his supporters when he launched his party’s election campaign in Epworth, about 30km east of the capital, Harare, that he had delayed announcing the date for the holding of the by-elections because of a spike in Covid-19 cases.

“We are a responsible government; we could not allow our people to die of Covid-19 because we wanted to hold by-elections. We chose to preserve people’s lives [rather] than risk them through holding these by-elections.

“Now that we are seeing a decrease in the number of new infections, we saw it fit to hold these pending elections and we must show the opposition that was saying we are afraid of elections that we are the people’s party by winning resoundingly,” said Mnangagwa. DM