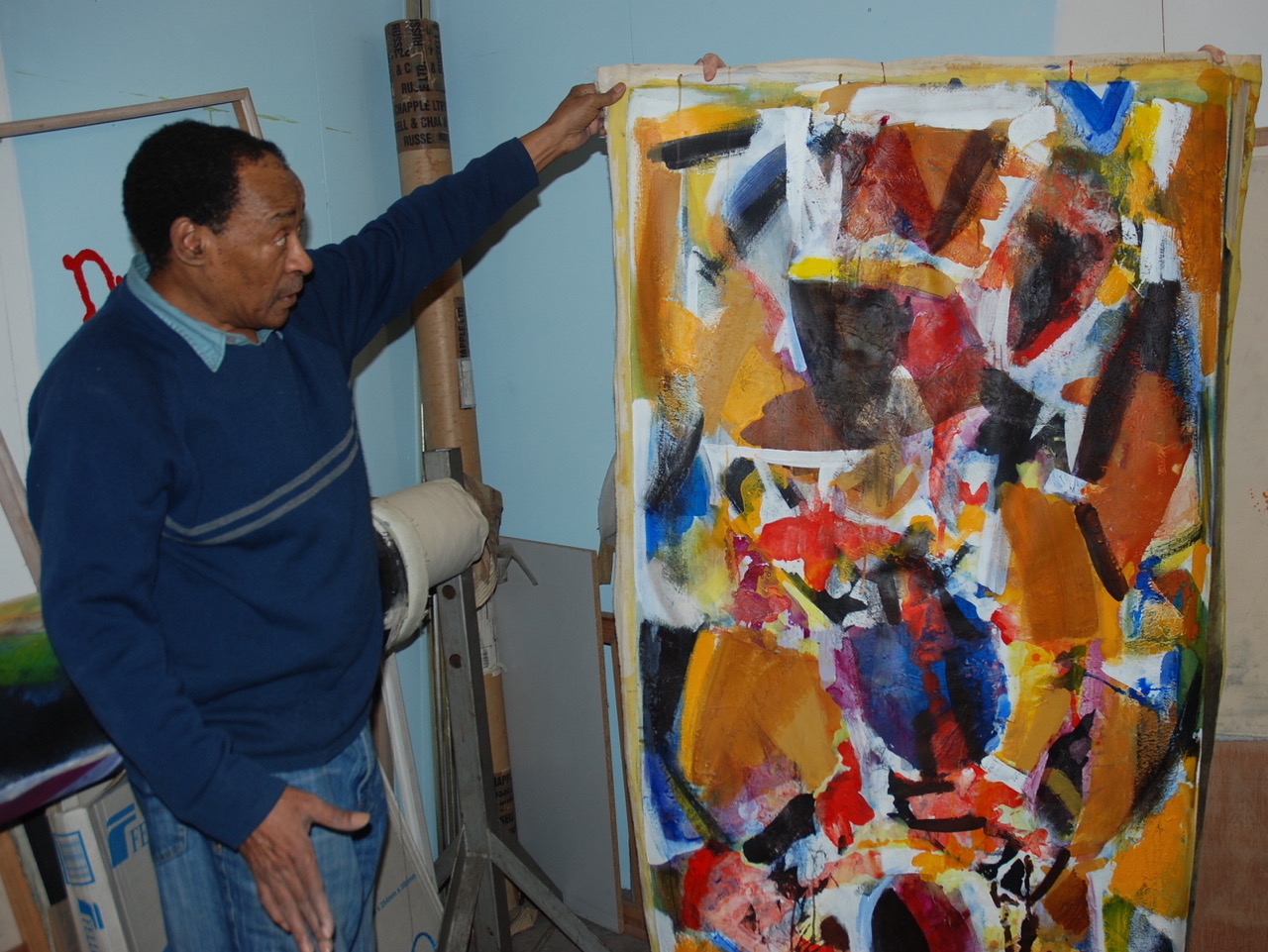 The artist in his studio in 2009 with an abstract canvas to be framed for the Standard Bank exhibition. Image: Clare Cooper, Art First / Courtesy of the Maqhubela family.

Louis Maqhubela (1939-2021) was one of the last of the great masters of South Africa’s modernist painting tradition. Modernism is a term for experimental approaches to form and content in art in response to political, technological and economic conditions of modernity since the late 1800s.

Art historians often speak of Gerard Sekoto as the father of modernism, Black South African modernism that is, and rightly so. But after Sekoto left for exile in Paris in 1947 it was a different group of artists – based mostly in Soweto – who created the foundations for what Black modernist artists could achieve in South Africa over the next 50 years.

Among them were David Koloane, Durant Sihlali and Louis Maqhubela. They were not working in any single style, even though contemporary critics constantly grouped them and other Black artists together as “township artists”.

In fact their art explored a wide range of modes, from Black Consciousness Movement-allied forms probing ancestral spirituality and the Black experience; to descriptive, or critical, or lyrical forms of realism; and also abstract and conceptual approaches. They created and taught in the art institutions that made the next generation of Black artists possible: the FUBA Academy, the Bag Factory and the earlier Polly Street art centre.

Even though the social part of the South African art scene was racially inclusive, the top galleries and academic art schools supported white artists almost exclusively. In response, as teachers, as organisers and as artists, they carved out a space for Black artists beyond the labels applied to them and imagined the possibilities for what followed. Sihlali and Koloane, inspired by Maqhubela, were the leading figures for subsequent generations of young Black artists, showing by example how being rooted in their Black experience need not mean confinement to Black or even South African themes in their work.

Maqhubela in particular played an active (mostly unsung) role at several critical inflection points in South African art history. For instance, Koloane was a schoolmate of his at Orlando High in the 1950s. Maqhubela gave Koloane his first box of paints and his first basic art instruction, and later he introduced him to artist, teacher and FUBA founder Bill Ainslie. Together, during the 1970s and 1980s, Ainslie and Koloane inspired a new school of African modernist abstract art, following the path of Maqhubela (and Douglas Portway).

Maqhubela himself bested many of his contemporaries in South Africa, including the white artists, and his success enabled him to travel for three months in Europe in 1967. He met Sekoto in Paris, he admired and closely studied works by Swiss-German artist Paul Klee, and he sought out Portway, living in exile since the 1950s, for guidance. Portway and Maqhubela shared a love of luminous colour and evocations of spiritual states, and a dedication to technical virtuosity with paint.

Back home in Johannesburg, Maqhubela was again a successful artist, now showing at Goodman and Lidchi galleries. But due to apartheid urban areas restrictions he was unable to build an art studio or live where he wanted.

Another close friend, the artist Dumile Feni, had already fled the country. From 1973 Maqhubela tried living in the bohemian art scene of Ibiza, Spain, for five years. Then he moved with his wife to London. There he picked up his art dialogue with Portway and found his old friend Feni. The two hung out in the rather wild and un-sober art scene with other expat artists and musicians.

Feni left for the US in 1979, asking Maqhubela to join him. But on the advice of his wife, Tana, Maqhubela did not. He needed to get serious, she said. In South Africa he could not attend an art academy because he was Black, but in London he studied at top art schools – the Slade and then at Goldsmiths in the 1980s. For 25 years his work was represented by Art First gallery in London.

Always experimenting with technique, Maqhubela’s art style continually evolved, though spirituality was a constant theme. Christian iconography with political subtexts featured in his early work. For instance his Peter’s Denial, a conté and mixed media work from 1966, he told me, was a coded political statement behind the biblical story of turning one’s back on a friend out of fear of the police.

By the early 1970s his work became more Afrocentric. His paintings are layered then scratched away colour surfaces, revealing and concealing. The works are often built up from atmospheric mists of luminous pigment. Sometimes figures are drawn over this glowing background in wiry black lines.

Later works, from the 1980s on, are often composed of intricate layers of monochrome impasto. All of his works, early and late, are technically and intellectually precise. They are not “intuitive”. They are oblique, not iconic, and they do not give up their secrets. They are reticent, like Louis Maqhubela the man.

His work creates its own time zone. It is and is not in Europe or in Africa. For me, thinking subjectively, Maqhubela’s paintings have a musical mood. They could be synesthetic, heirs to Russian abstract artist Wassily Kandinsky. The earlier, glowing works light up affects similarly to the shimmering vibraphones of US jazz artist Milt Jackson, or the precise placement and plangent horn tones of jazz master Miles Davis. It’s deep listening, meditative seeing.

The 1980s and later works are intricate but they are also more hard-edged, like hard bop. Minimalist US painter Robert Ryman comes to mind as a fellow traveler, as does the solidity of aural shapes in minimalist works by US composer Philip Glass.

I met Maqhubela in London in January 2007. He was super reclusive, rarely leaving home and in frail health. I think what convinced him to come out to meet me at all was that I had mentioned my friendship with Durant Sihlali, his own good friend and mentor who had passed in 2005. Sihlali had told me, “If you are in London you have to speak with Louis. He knows everything.”

Louis and I met at the Imperial War Museum, and walked through an exhibit of pro- and anti-war posters, and afterwards went for mince pies and coffee. He spoke so quietly I could barely hear him, but we stayed out talking – heads huddled close (so I could hear!) – for hours. We spoke about how unfortunate it was that Sihlali had passed without there being a retrospective of his work at a major institution in South Africa.

Louis wanted to be sure that the next generation in South Africa knew what he and his contemporaries had achieved, and he spoke of his own desire to be featured in a retrospective exhibition. In 2010 that wish was granted in A Vigil of Departure, curated by Marilyn Martin for the Standard Bank Gallery in Johannesburg. DM/ML

John Peffer is an associate professor at Ramapo College of New Jersey.