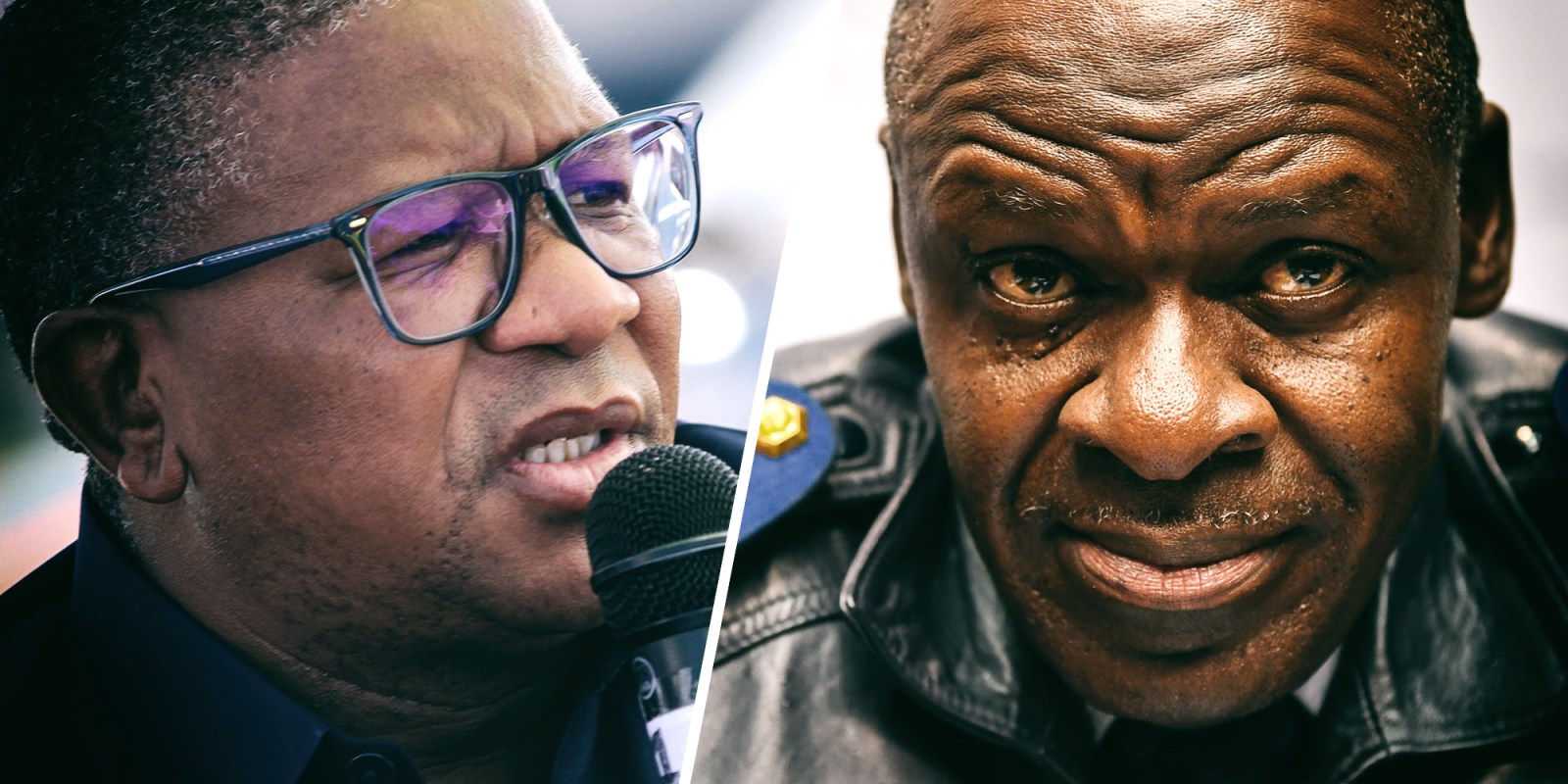 In an application to the Constitutional Court after a failed Supreme Court of Appeal (SCA) bid, National Police Commissioner Khehla Sitole has set out how Fikile Mbalula was first to inform him about an alleged “security threat” at the ANC’s Nasrec conference in December 2017.

This was the genesis of the “Minister’s Project” — the alleged attempted illegal procurement, at the inflated cost of R45-million, of a listening device prior to the 2017 conference.

The failed procurement has since seen the national commissioner and his two deputies, Francinah Vuma and Lebeona Tsumane, found guilty of breaching their duties as SAPS officers.

In January 2021, Judge Norman Davis found in the Pretoria High Court that the top cops had placed the interests of the ANC above those of the country in obstructing an Ipid investigation into the illegal procurement.

On 30 June 2021 the SCA, before Justices Malcolm Wallis and Nolwazi Mabindla-Boqwana, dismissed with costs Sitole’s appeal against that ruling.

Now Sitole, Vuma and Tsumane are attempting to have this ruling, and Davis’ original finding, reviewed as well as reopen the arguments on the classification of documents.

The top cops also seek to introduce “new evidence” brought to light, said Sitole, by Inspector-General of Intelligence (IGI), Setlhomamaru Dintwe, at the Zondo Commission in 2021. This was information he had previously not been aware of, Sitole claimed.

Sitole’s revelation of Mbalula’s personal involvement explains the role of Bo Mbindwane, the then minister of police’s hands-on adviser in the scandal.

Mbindwane was present at a meeting in a Pretoria hotel on 13 December 2017 where the “grabber” deal was discussed with Ibabathan Kistiah, owner of the company I-View (under investigation at the time by Ipid). The ANC’s hotly contested elective conference was due to take place two days later.

Sitole had been appointed by Zuma in November 2017. Prior to this, he was Divisional Commissioner of Protection and Security Services. Sitole promoted both Vuma and Tsumane on 2 December 2017, a month after his own appointment.

Former head of VIP Protection Services, Major-General K “Bhoyi” Ngcobo, one of Zuma’s most trusted protectors, was appointed by the president as acting divisional commander in August.

His was an appointment Mbalula, as minister, welcomed at the time. Four months later, on the morning of Wednesday 13 December, Mbalula phoned Sitole.

The first he heard of anything, said Sitole in his affidavit, was that very day.

“The Honourable Minister communicated to me that there was information about a security threat affecting the Nasrec Conference,” revealed Sitole.

Sitole said that Mbalula had informed him that this “security breach” had the “effect of interfering with security details of the event and of the dignitaries, including the president and several ministers who will be attending”.

The minister said he would be sending Mbdindwane to “advise him”, Sitole said.

Most importantly, the commissioner informed the court, he was told that the identified threat was “going to affect the safety and security of the President (Zuma) and the Ministers”.

Protecting them fell “squarely within the purview of the security forces and most importantly, the South African Police Service”.

“It was, therefore, the responsibility of the South African Police Service to secure the Nasrec conference,” Sitole argued.

He said the threat had been verified by the “crime intelligence community”.

It was only later, Sitole added, that he had learnt that a “group of backpackers” had posed the threat, when Dintwe had testified in May 2021 to the Zondo Commission.

That was the first he had heard of this, he said.

Dintwe, said Sitole, had told the commission that Mbindwane had met the IGI prior to the 13 December meeting with Sitole and SAPS.

“Unfortunately this evidence was led long after the judgement of the court. This evidence should have been considered,” argued Sitole.

Sitole said Dintwe had testified that he had received a call from Mbindwane “a few days before Nasrec” as he had wanted to “discuss an urgent issue”.

“When he [Dintwe] met Mbindwane he was told there was a group of backpackers who wanted to influence the outcome of the Nasrec Conference.”

According to Sitole, Dintwe had testified to the Zondo Commission that Mbindwane had said that his “biggest challenge was that the acting Divisional Commissioner of Intelligence did not want to procure the grabbers”.

“He was further told that the grabbers were valued at R210-million, however because the date was so close they could settle for one grabber at the cost of R45-million,” Sitole said.

Sitole said that Dintwe had said that the reason Ngcobo had not been keen on purchasing the grabber “was because the IGI was conducting some investigation in relation to previous procurements”.

Dintwe had testified that in the end, he had met Ngcobo and Mbindwane “to advise them he has no interest in being involved in the procurement process”.

It was only later Mbalula dispatched Mbindwane to “brief” Sitole at the Pretoria hotel. After this, the commissioner contacted Vuma and Tsumane to join him where they were briefed.

“I told them to proceed with the procurement of the device that was apparently needed in order to secure the congress. The said device was apparently necessary to deal with the security breach. I further advised them that whatever they do should be within the prescripts of the law,” said Sitole.

Ipid investigators have charged that the procurement was an attempt to flush funds out of the Secret Service Account to “buy” votes at the ANC’s conference.

Vuma, in her court papers, said that Ngcobo had been a key figure driving the procurement.

While Sitole’s job dangles on an unravelling thread, the commissioner and his colleagues are intent on challenging Ipid’s access to classified information. Ipid has argued and the courts have found that classification cannot be used to conceal malfeasance.

So far taxpayers will be footing the legal bills for SAPS and Sitole as he takes his fight to the apex court.

Back in 2017, he had called in Vuma “because of her extensive knowledge and experience in procurement procedures” and that she had been present “to oversee and advise on what steps to be taken”. Tsumane, he said, would implement the operation.

Sitole said that later on the 13th while he was at Nasrec, he had received a message that I-View was under investigation by Ipid.

“I then immediately issued an instruction that the intended procurement of a grabber should be stopped with immediate effect,” he said.

The first “I-View 1” was an investigation into the procurement of RIPIJAR and Daedalus Software due to “suspected fraud and gross irregularities in procurement by SAPS CI Division Goods and Services in 20 Dec 2016 and March 2017 R54 million”.

The amount was paid in two tranches — R33-million transferred on 22 December 2016 for the RIPJAR software and R21-million handed over for Daedalus in November 2016.

I-View II was an investigation into the procurement of bulletproof vests by SAPS from the company at the inflated price of R33,000 per vest.

In March 2021, Ipid finally managed to get hold of the documents relating to the two programmes.

Sitole, clearly furious, said in his affidavit that investigations into these matters were not yet complete and that “it is not in the public interest that the SAPS should, in the middle of an investigation, disclose information to Ipid”.

In the Davis judgment, this is exactly what the court found SAPS should do.

Sitole’s application comes in the wake of a leaked tape of President Cyril Ramaphosa allegedly explaining to an ANC NEC Zoom meeting that investigations would reveal that “a lot of money of public funds was used” in various ANC campaigns over the years.

“And I said in this case, I am prepared to fall on the sword. So that the CR17 campaign, yes, should be the only one that’s looked at,” said the president.

There were other occasions where “each one of us knows that quite a bit of money that is used in campaigns” from “state resources and public resources”, the president can be heard to say.

The Nasrec Grabber scandal, it appears, is one such possible moment that many hope is kept under wraps in the classified filing cabinet.

*In a previous News24 report Mbalula claimed that the 13 December 2017 meeting had not been held at his directive.