The science behind fake snow and how it will affect the... 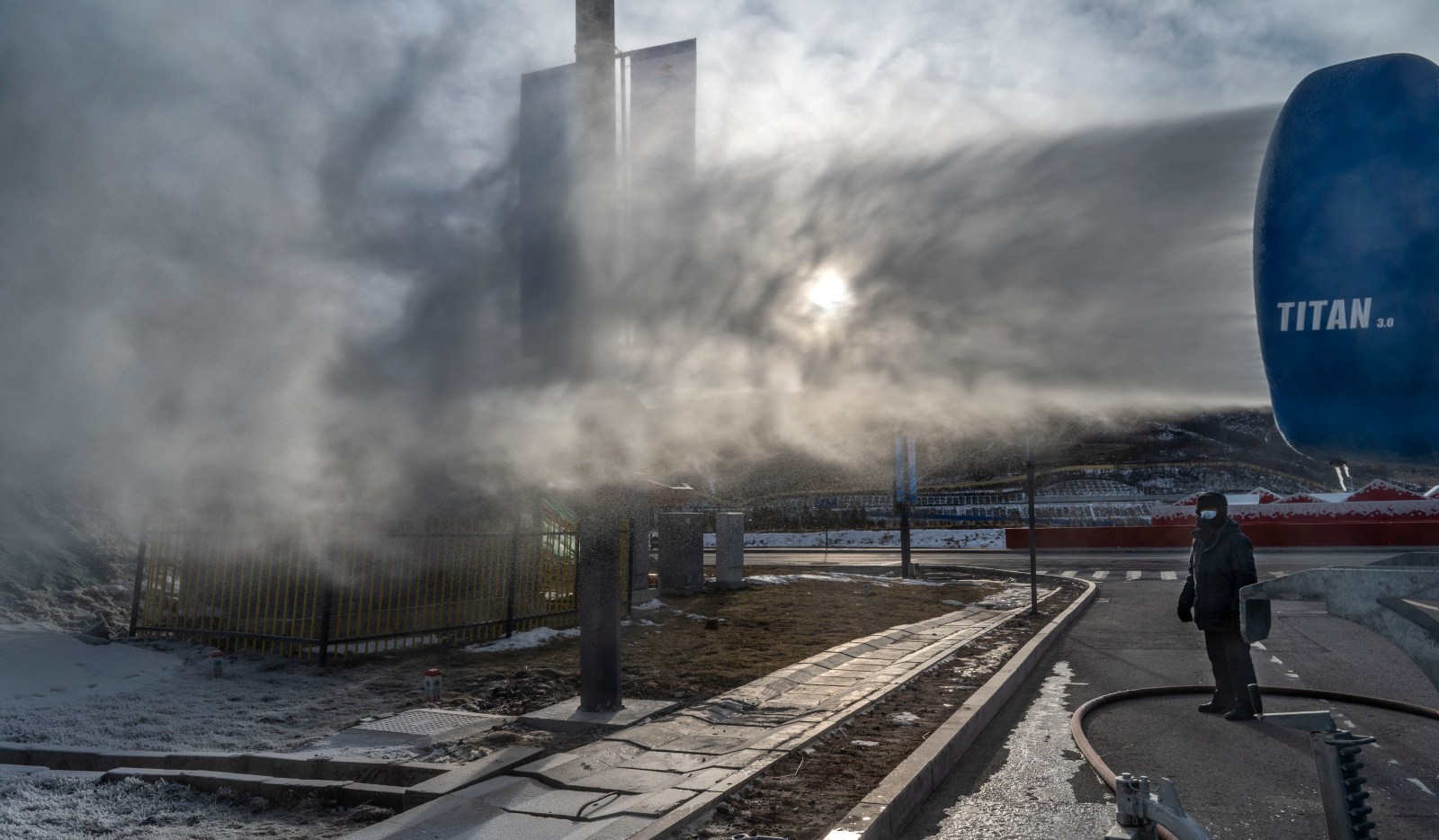 A worker stands next to a snow machine making artificial snow outside one of the athletes villages for the Beijing 2022 Winter Olympics on 2 January 2022 in Chongli county, Zhangjiakou, Hebei province, northern China. (Photo: Kevin Frayer / Getty Images)

Although fresh powder is what most recreational skiers dream of, Olympic skiers have different tastes. Peter Veals, an atmospheric scientist, explains what makes artificial snow different and how it may affect performances in China.

The Winter Olympic Games conjure up images of snowy mountain ranges, frozen ice rinks and athletes in cold-weather gear. And for good reason. Winter Olympic venues have often been in places that receive an average snowfall of 750cm or more a year.

The mountains surrounding the snow events for the Beijing Winter Olympics, however, are tones of brown and green and nearly devoid of snow. The region typically receives only a few centimetres of snowfall in each winter month. This means that basically all of the snow the athletes are competing on is human-made.

I am an atmospheric scientist who specialises in mountain weather and snow. I am also the founder of a snowmaking startup and an avid skier. There are distinct differences between natural and artificial snow, and it will be interesting to see if these differences have any effect on competition.

Although artificial snow and natural snow are both frozen water, most skiers and snowboarders are immediately able to recognise that the two are very different.

Traditional snowmaking uses high-pressure water, compressed air and specialised nozzles to blow tiny liquid droplets into the air that then freeze as they fall to the ground. But snowmaking is not as simple as just making sure the air is sufficiently cold.

Pure water does not freeze until it is cooled to nearly -40°C. It is only the presence of microscopic suspended particles in water that allow it to freeze at the familiar 0°C. These particles, known as ice nuclei, act as a sort of scaffolding to help ice crystals to form.

Without these particles, water struggles to turn into ice. Different particles can raise or lower freezing temperatures, depending on their specific molecular configuration.

Two of the best ice nuclei are silver iodide and a protein produced by the bacteria Pseudomonas syringae. Most snowmaking systems add a commercial form of the bacterial protein to water to ensure most of the tiny droplets freeze before they hit the ground.

Natural snow starts as a tiny ice crystal on an ice nucleus in a cloud. As the crystal falls through the air, it slowly grows into the classic six-sided snowflake.

By comparison, human-made snow freezes quickly from a single droplet of water. The resulting snow consists of billions of tiny spherical balls of ice.

It may resemble natural snow to the naked eye on a ski run, but natural and artificial snow “feel” very different. Because the tiny ice balls pack together quite densely – and some of them may not have frozen until they touched the ground – artificial snow often feels hard and icy.

Fresh natural “powder” snow, on the other hand, provides skiers with an almost weightless feeling as they soar down the mountainside. This is largely because the natural snow crystals stack very loosely – a fresh layer of powder is as much as 95% or more air.

Although fresh powder is what most recreational skiers dream of, Olympic skiers have different tastes. Racers want to be able to glide as fast as possible and use their sharp edges to make powerful, tight turns. The dense, icy conditions of artificial snow are actually better in this regard. Race organisers often add liquid water to race courses of natural snow that will freeze and ensure a durable, consistent surface for racers.

Another consideration is that natural snowstorms produce dull, flat lighting and low visibility – hard conditions to race or jump in. Heavy natural snowfall will often cancel ski races, as happened during the snowy 1998 Nagano Games. For racers, clear skies and artificial snow provide the advantage there, too.

But hard human-made snow does have its disadvantages. Freestyle skiers and snowboarders who are flying off jumps or sliding on rails high above the ground seem to prefer the softer surface of natural snow for safety reasons. This is also true of Nordic skiers, who recently flagged the dangers of artificial snow in the event of crashes, as icy, hard surfaces can lead to more injuries.

Scientists have been trying for decades to create more natural snow on demand. The first way that people tried to make “real” snow was by seeding natural clouds with silver iodide. The goal was to help moisture in clouds to turn into falling snow crystals. If you could make this process – called the Wegener-Bergeron-Findeisen process – occur more easily, it would theoretically increase the snowfall rate.

In practice, it has historically been difficult to prove the efficacy of seeding. Recent work using large, meticulously deployed sets of atmospheric instruments has, however,  shown that – for a fraction of storms with the proper conditions – seeding clouds with silver iodide does indeed yield modest increases in the total amount of snowfall.

Another option – which doesn’t require storm clouds to seed in the first place – is to create snowmaking machines that can grow fluffy natural snow crystals.

Scientists have been growing snowflakes in laboratories for many decades, but the process is delicate, and typically researchers only produce a few flakes at a time. Because ice crystals typically grow slowly, it has been tricky for researchers to scale the process up by the many orders of magnitude needed to grow enough snow for skiing.

The dry, barren mountains hosting the 2022 Winter Olympic venues are not exactly a skiing destination. But thanks to snowmaking science, the athletes have reliable, if icy, runs to compete on. And sports fans can all be thankful for the technology that allows them to enjoy the high-speed spectacle put on by the brave souls who compete in the skiing and snowboarding events. Reuters/DM168

Peter Veals is a professor of atmospheric science at the University of Utah.