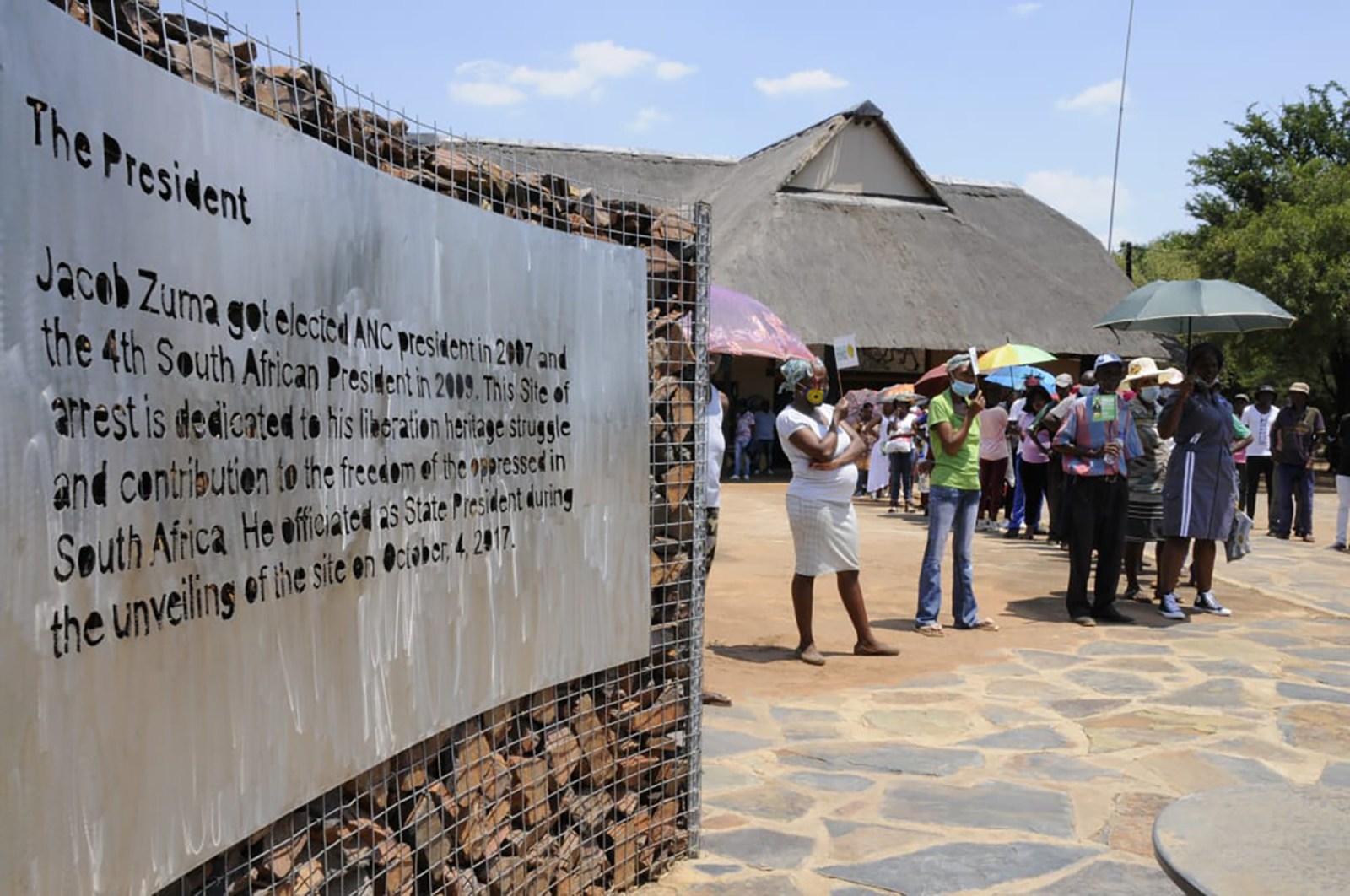 On Monday, former president Jacob Zuma was in virtual attendance at an event at Groot Marico Heritage Site, North West, where he was named as the ‘lifetime president of the people’.

The Msholozi President of the People group, along with members of the Groot Marico community in North West, named former president Jacob Zuma as the “lifetime president of the people” on Monday.

This declaration of loyalty – against a backdrop of court appearances, State Capture allegations and legal battles for the former president – was rooted in Zuma’s “contribution to the freedom of the oppressed in South Africa”, said Kagiso Booysen, national coordinator of the Msholozi group.

“We rest all our wishes… all of what we would love to see happening within the country, we rest all of our hope with… President Jacob Zuma,” said Booysen.

The event was hosted at the Groot Marico Heritage Site. Zuma unveiled a monument – the President Zuma Site of Arrest sculpture – at the heritage site on 4 October 2017. The monument commemorates the location where he and 53 other freedom fighters were arrested by apartheid security forces in 1963 while they were attempting to flee into exile.

“I think the aim is to recapture the glory days of Zuma, when he was a Struggle veteran – that is before [he became] the controversial serial litigant [who] does not want to answer to allegations of impropriety,” said political analyst Ralph Mathekga on the choice of venue.

“It is an attempt to dress Zuma in an evangelical dress while knowing… that is not what is actually the case.”

The event was live-streamed on YouTube, with Zuma making a virtual appearance from his Nkandla homestead. His address was largely focused on the history of the Groot Marico site and his personal journey as a young Umkhonto weSizwe (MK) recruit.

Zuma spoke of how their time spent at Robben Island Maximum Security Prison strengthened those arrested at the Groot Marico site.

“We were freedom fighters ready to fight, ready to do anything that the ANC said we must do,” he said.

“I think Groot Marico serves as a symbol to remind generations to come that freedom was fought [for] by many of our country, of our candidates, of MK, of leaders of our country,” he said. “This is what we need to do as South Africans in different places. There are heroes all over our country. It needs people in those areas to remember this.”

A post-Sona and pre-court event

The Groot Marico ceremony comes just days after President Cyril Ramaphosa’s State of the Nation Address – an event aimed at positioning him for a second term as president ahead of the ANC’s 2022 elective conference, according to a Daily Maverick report from 12 February.

Mathekga suggested that the timing of the event shows that while the ANC is no longer a platform that is readily available to Zuma, Ramaphosa has yet to extend his influence to the point that people find it unwise to associate with the former president. Rather, there are still people who see currency in such an association.

“I think there’s a clear assessment that Jacob Zuma’s politics are not dying off, and I think it also has to do with the strength of Ramaphosa to wrestle the party to his side and make sure that, as the president of the party, it follows his agenda,” said Mathekga.

The groups that have turned to support Zuma are largely those that see the allegations of State Capture as a witch-hunt against him and his allies, some of whom are still in positions of power within the ANC, he continued. Furthermore, for those factions that have been displaced from power within the ANC, advocating for Zuma is an opportunity to galvanise support where the party platform is not available.

“Are they committed to Zuma? His world-view? I’m not even aware what his world-view is. For me, he’s just someone who has many legal problems, and his legal problems offer those people a platform to try to claim a space around the table,” said Mathekga.

Among Zuma’s legal issues is an upcoming ruling by Judge Piet Koen, who denied Zuma’s special plea to have senior advocate Billy Downer removed from trying the Arms Deal graft case in October 2021. On 16 February, Koen will rule on Zuma’s application to take his dismissed special plea to the Supreme Court of Appeal.

Mathekga posited that Zuma’s personal problems go some way towards explaining his involvement in events such as the Groot Marico inauguration.

“He’s in trouble. I mean, if a group of aliens call him to address them, he will go and he will find a way to challenge the current leadership of the ANC, particularly Ramaphosa’s agenda. So, he will take whatever comes,” he said.

Msholozi President of the People

The Msholozi President of the People group was established in December 2021. It is in the process of registering as a nonprofit organisation.

“The group is made up of people that have been part of the Friends of Zuma campaign dating back to the orchestrated rape charges. We took a resolution last year after his unconstitutional arrest to form this group,” said the Msholozi group in email correspondence with Daily Maverick.

The group is entirely independent of the JGZuma Foundation, which recently released a yearlong programme of plans to celebrate Zuma’s 80th birthday.

14 Feb 2022 is a BIG DAY in the diary of H.E Prez Zuma.
We kick start a year long journey to celebrate HE Pres Zuma.
* Unveiling the program of his 80th Birthday Celebration.
* Unveiling Monthly themes to celebrate this Gallant Freedom Fighter & Symbol of African Liberation.✊🏿 pic.twitter.com/1SZlDoqCdO

The Msholozi group aims to see Zuma’s “dream of a Pan-African university realised” while educating people on his dream of a strong, independent African economy where education is free and land belongs to the majority, they said.

“We inaugurate him because of the love that we have for President Zuma. He does not need to hold any power or any office for the public to love him,” said Booysen at a press briefing on 11 February.

However, Mathekga maintained that support for Zuma has nothing to do with protecting South Africans or their broader interests.

“[Zuma] must be the people’s thief, not the president. The capacity in the public service has been totally eroded because of him… and he still has this platform,” he said.

“It’s just groups that are seeking to have a seat around the table and continue to benefit and extend through this patronage network.” DM