Eyes on the prize: Ramaphosa steps up his second-term b...

Eyes on the prize: Ramaphosa steps up his second-term bid

The clues were there in his action-oriented speech and choice of Sona guests.

President Cyril Ramaphosa’s Sona wasn’t only aimed at clawing back votes for the ANC to prevent it from having to govern in a coalition in 2024. The event was also aimed at positioning him for a second term ahead of the ANC’s elective conference at the end of this year.

Addressing a joint sitting of Parliament in the Cape Town City Hall on 10 February after a fire gutted the National Assembly last month, Ramaphosa went off script to praise the South African Constitution as “the best constitution in the world”.

This was a stab at his detractors, in the main Tourism Minister Lindiwe Sisulu, who has been making jabs at the judiciary and the Constitution as a way of lobbying support to oppose him.

For this reason too his detractors have hailed the alleged parliamentary arsonist, Zandile Mafe, as a hero. Ramaphosa used the fire to pitch himself as someone who will lead renewal in the ANC and in the country.

“There are moments in the life of a nation when old certainties are unsettled and new possibilities emerge,” he said. “In these moments, there is both the prospect of great progress and the risk of reversal. Today, we are faced with such a moment.”

His choice of guests was also a pointer towards how he is positioning himself ahead of December.

Former speaker Max Sisulu, Lindiwe Sisulu’s brother, was among the guests, setting tongues wagging that Rampahosa was playing the siblings off against each other.

During an ANC Progressive Business Forum breakfast the next morning, ANC treasurer-general Paul Mashatile made it clear that most of the party’s energy this year will be focused on its elective conference, but in such a way that would be winning the party enough votes in the 2024 general elections to govern outright.

“Members of the ANC feel very strongly that [Ramaphosa] should make himself available for another term to continue this programme of tackling corruption,” Mashatile said.

This is the second time that Ramaphosa’s leadership has been endorsed explicitly on a public party platform. The first was at the ANC’s 110th birthday rally on 8 January in Limpopo.

Mashatile went on to say he reckoned South Africa “is going to become a good country that investors will be attracted to”, and that the ANC wanted to ensure “that South Africa is stable and there is good governance in the country”.

Mashatile also said it was important for the ANC to get above 50% of the poll in 2024 because coalitions were “by their very nature unstable”.

For this reason it was important to pay attention to better service delivery, fixing the roads and making sure that people have water. Mashatile did not say this explicitly, but many in the party believe that Ramaphosa is the best hope the party has to attract the biggest share of the vote.

Ramaphosa has consistently rated higher than the ANC in public opinion polls.

Minister in the Presidency Mondli Gungubele was also at the business breakfast to explain the thinking behind some of Ramaphosa’s speech.

Focusing on the business aspect, where Ramaphosa for the first time acknowledged that “government does not create jobs” but “business creates jobs”, Gungubele said getting as many people into employment as possible was an immediate priority, as an employed population was critical for security. “With the little we have, we must go on to create an environment for this,” he said.

Gungubele warned that poor conditions could give rise to populism. “In the absence of these interventions, populism will take the charge.”

One of Ramaphosa’s lobbyists said that the president’s “action-oriented” speech showed he was preparing for a second term. With his detractors still struggling to get a single candidate to challenge Ramaphosa, and with Lindiwe Sisulu’s campaign still struggling to gain traction, most of the competition is for the remainder of the positions in the top six.

Mashatile himself is said to be preparing to run for deputy president, but his lobbyists said it’s too early for them to comment.

Mashatile is close to Deputy President David Mabuza and is unlikely to challenge him, so he can only run once he has convinced Mabuza to step down.

Mashatile hinted at this when he joked that all six of the officials would be stepping down ahead of December “to allow [ANC] members to elect other people”.

This might turn out to be largely true. Ace Magashule is still likely to be ruled out for office in December as his corruption trial would still be ongoing, and a number of contenders have already started putting up their hands for the position of secretary-general.

His deputy, Jessie Duarte, has been suffering from poor health and has indicated that she would be retiring when her term finishes at the end of this year.

The only two positions that are not expected to step down is the president, and ANC chairperson Gwede Mantashe.

Former minister and ANC policy head Jeff Radebe is also reported to have put his hand up for the deputy president’s position – he was a contender for the Presidency in 2017 – and was the guest of honour at a Sona viewing event hosted by investors in Cape Town at The Capital 15 on Orange Hotel.

Ramaphosa also addressed security concerns, owning up to the weaknesses in government, after the release of the report of the expert panel into the civil unrest in July last year.

“The expert panel found that Cabinet must take overall responsibility for the events of July 2021,” he said. “This is a responsibility that we acknowledge and accept.”

Despite this, sources say that Ramaphosa is unlikely to effect a major reshuffle in his Cabinet for now.

Police sources have, however, said that he was likely to bring axed Western Cape detective head Jeremy Vearey back into the fold once the process around the suspension of Police Commissioner Khehla Sitole has played out.

Sitole is due to face an inquiry into his fitness to hold office after allegations that he and his lieutenants flouted their duty as police officers by waylaying corruption allegations.

Ramaphosa said announcements would soon be made on “leadership changes in a number of security agencies to strengthen our security structures”.

While he was delivering his speech, the president’s detractors sent out notices detailing a year of activities celebrating former president Jacob Zuma’s 80th birthday. In the flyer, Zuma is styled as the “People’s President” and “the Symbol of African Liberation”. DM168 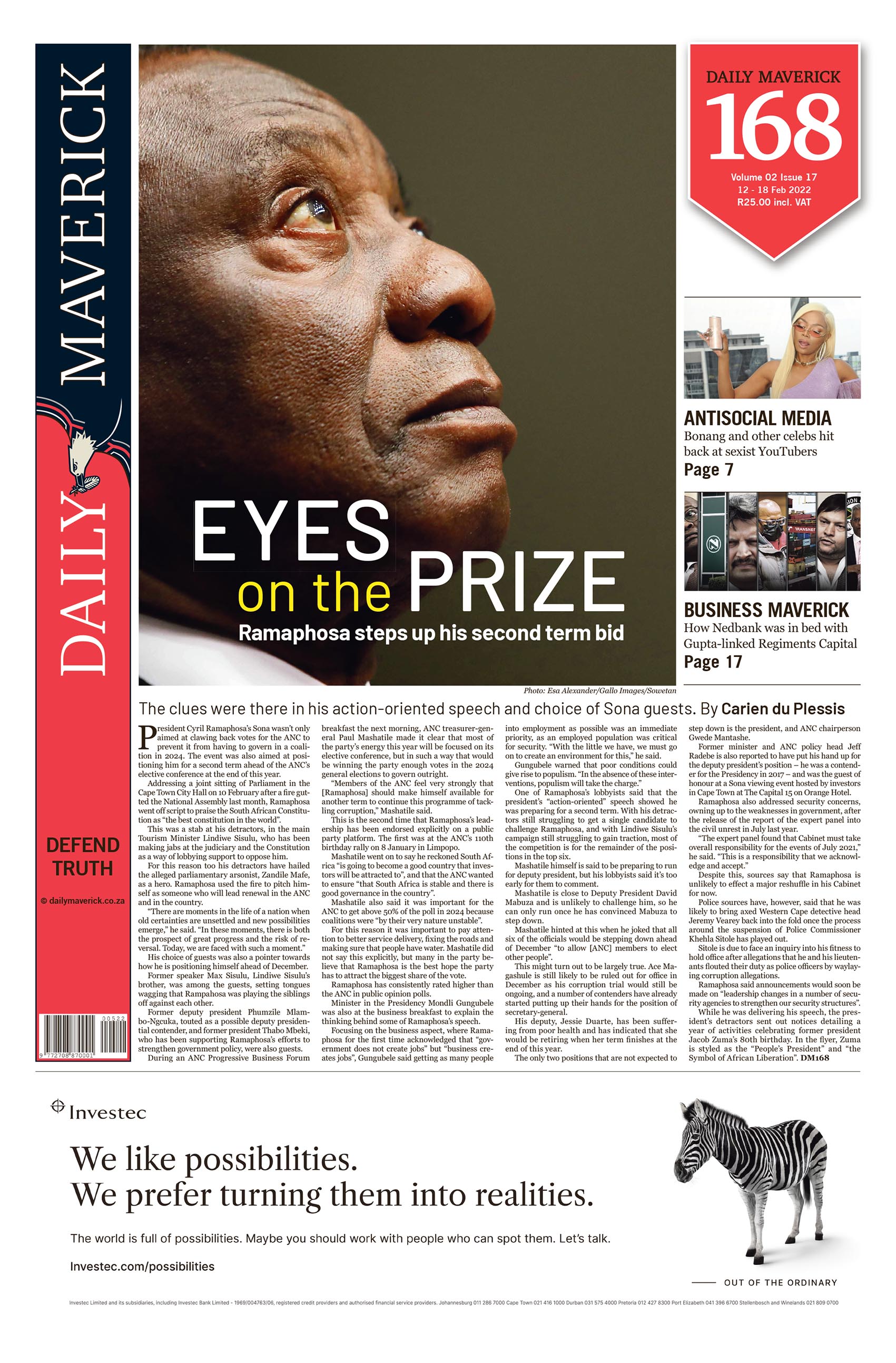