The long walk from absolute monarchy to democracy in Swaziland/Eswatini 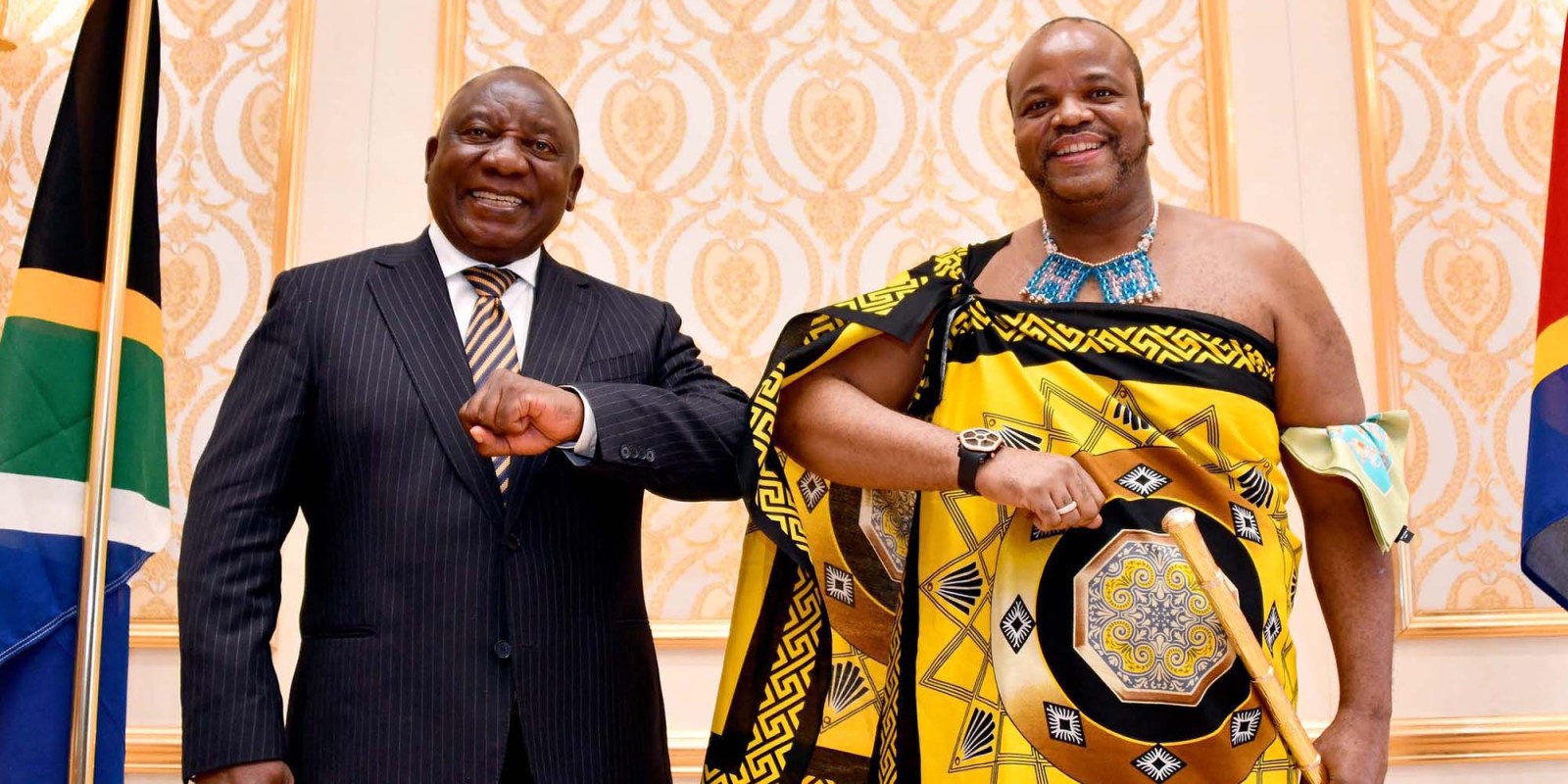 President Cyril Ramaphosa, in his capacity as Chair of the Southern African Development Community Organ on Politics, Defence and Security, meets King Mswati III at the Royal Palace in the Kingdom of Eswatini for deliberations on political and security developments in the Kingdom. (Photo: Elmond Jiyane / GCIS)

In the second article in a series on how activists across southern Africa use the law to protect and advance human rights, Maverick Citizen looks at the challenges facing human rights lawyers in Swaziland/Eswatini, a country where a constitutional Bill of Rights and justice system play second fiddle to an absolute monarchy.

In June 2021, Swaziland/Eswatini was engulfed by a popularly supported uprising for democracy and human rights. The uprising involved students, women, trade unions and people from rural areas. Activists claim that more than 80 protesters were killed by the police and army. The protests and killings have been documented in The Unthinkable, a film made by the Swaziland Solidarity Forum that has been widely watched on YouTube. The film strengthened calls for justice.

In November 2021, President Cyril Ramaphosa visited Swaziland/Eswatini as part of the SADC Troika. After the meeting, King Mswati III committed to initiating a national dialogue to discuss the demands raised in the protests. This was yet to happen by early February 2022, and suggestions that it should form part of the king’s traditional Sibaya have been condemned by democracy activists.

Although the 2021 protests were quashed, tensions remain high and the thirst for democracy unquenched.

In early February, several student leaders were arrested and later released. But two of Swaziland/Eswatini’s MPs, Mduduzi Bacede Mabuza and Mthandeni Dube, remain in prison awaiting trial. Activists who spoke to Maverick Citizen allege that the judge presiding over their trial is the king’s sister-in-law whose husband is the attorney-general.

In October 2021, Swaziland/Eswatini’s usually quiescent Commission on Human Rights and Public Administration Integrity tabled its Preliminary assessment report on Civil Unrest in the Kingdom of Eswatini, June 2021. The report (which does not seem to be available online, but which we publish below) concluded that: “Human rights violations and abuses were perpetrated during the unrest…”

The Commission said that in their assessment “lethal force was used indiscriminately on protesters and members of the public who were not even part of the protests.

“This is demonstrated by the death of children and women. Also, the injuries sustained by victims on the upper body such as head, abdomen, and spinal area.”

In addition, the Commission found that “the majority of people arrested were detained for unreasonably prolonged periods without trial. Even though they were eventually afforded their right to bail, the courts often imposed excessive bails and steep fines”.

However, according to Maxwell Dlamini, a local human rights activist, the report has underestimated the number of civilians killed. As a result, says Dlamini, “the civil society and pro-democracy movement has demanded that an independent and international body carry out the actual investigations”.

“The Coordinating Assembly of Non-Governmental Organisations announced that they would be lobbying for an international investigation into the shooting and killing of civilians in Eswatini.”

Nonetheless, a proposal to debate the Commission’s report in the Senate of the Swazi parliament is said to have been quashed.

In this context, Maverick Citizen has interviewed activists about their experience of the legal system in Swaziland/Eswatini, particularly how amendable the law is to advancing human rights and ensuring justice for those who died last year in protests against Africa’s last absolute monarchy.

The answer is that “it is not easy”.

Anneke Meerkotter, the executive director of the Southern African Litigation Centre (SALC), an NGO based in Johannesburg that assists human rights litigation across the SADC region, says Swaziland/Eswatini is a bundle of contradictions when it comes to the law.

Meerkotter says, on the one hand, “you can do a hell of a lot with the law in Eswatini”. On the other hand, she agrees that land is used for political control, that the judiciary is prone to political influence and that charges of sedition are being used against democracy campaigners (even though the High Court has declared the crime of sedition unconstitutional) to make activists afraid of speaking out.

In a March 2021 submission to the UN Office of the High Commission on Human Rights, SALC noted how:

“This is reinforced by the designation of PUDEMO as a terrorist group and the continued arrest of persons for belonging to PUDEMO despite them not being involved in any terrorist activities.”

More recently, SALC has warned how the king continues to stifle dissent and how “since independence, the sedition offence has repeatedly been used against activists who criticise the monarchy. Its continued use is not only a disproportionate response to criticism but a sign of a paranoid and desperate State”.

But, says Meerkotter, ironically the country has a good Refugee Act and a good Domestic Workers Act and has recently seen a big mobilisation around a court case seeking to advance the rights of the LGBTI community. Judgment in that matter is awaited.

Maverick Citizen interviewed Thulani Maseko, a veteran human rights lawyer who was imprisoned between 2014 and 2015 (watch him speak on Using the Law to Defeat a King here.)

Maseko, who has practised as a lawyer in Swaziland/Eswatini since 1999, has a long memory. He says that despite working “in a situation where the law is used as a tool of oppression, difficult as it may be, we need to find the small spaces to advance the rights of the people.

“From time to time you do score some small victories, depending of course on who the judge that you are appearing before is, but most of the time we do not succeed because of the very set-up in our courts, the politics and the way the law is set up. You do have a sense of frustration.”

‘We are caught between hope and fear’ — Thulani Maseko, chair of the Multi-Stakeholder Forum in Swaziland/Eswatini

According to Khulekani Msweli, from the Vuvulane Orphans and Vulnerable Children’s Foundation, citizens have formed an association to bring formal charges against the government. A complaint against the king has also been lodged with the International Criminal Court (ICC).

Together with other lawyers, Maseko is currently doing the exhausting and emotional work of trying to put together civil and criminal cases on behalf of people killed or injured in the 2021 uprising.

Says Maseko: “We agreed that in the first instance we need to file civil claims for and on behalf of all the people who were brutalised or massacred and whose limbs were shot and broken by the state. We decided to file a huge number of letters of demand just to ensure that those claims do not lapse in law.

“The next level would obviously be to issue a summons against the government, but we know they will oppose it. They will defend all these actions.

“But it is a worthy exercise that must be done with a view to finding accountability and assisting the people to get some compensation for this brutality.”

Ultimately, it seems that while the law and lawyers have a very important role to play, politics, protest and international pressure will determine whether democracy comes to Swaziland. Recognising these challenges, the Swaziland Liberation Movement (Swalimo), which was formed in October 2021, states in its Liberation Charter of 2021 that in a democratic Swaziland:

“All Shall Be Equal Before The Law And None Shall Be Above”:

Note on the use of Swaziland/Eswatini: In 2018 King Mswati III unilaterally changed the name of Kingdom of Swaziland to Kingdom of Eswatini in an act that many regard as another abuse of his powers. For this reason, many amaSwati people and pro-democracy organisations continue to use the name Swaziland.

An article by Mark Heywood reporting on the uprising in Eswatini in 2021 can be found here.

The first article and webinar in this series looking at how activists are using the law in Mozambique can be found here.