Why a capable developmental state and an efficient publ... 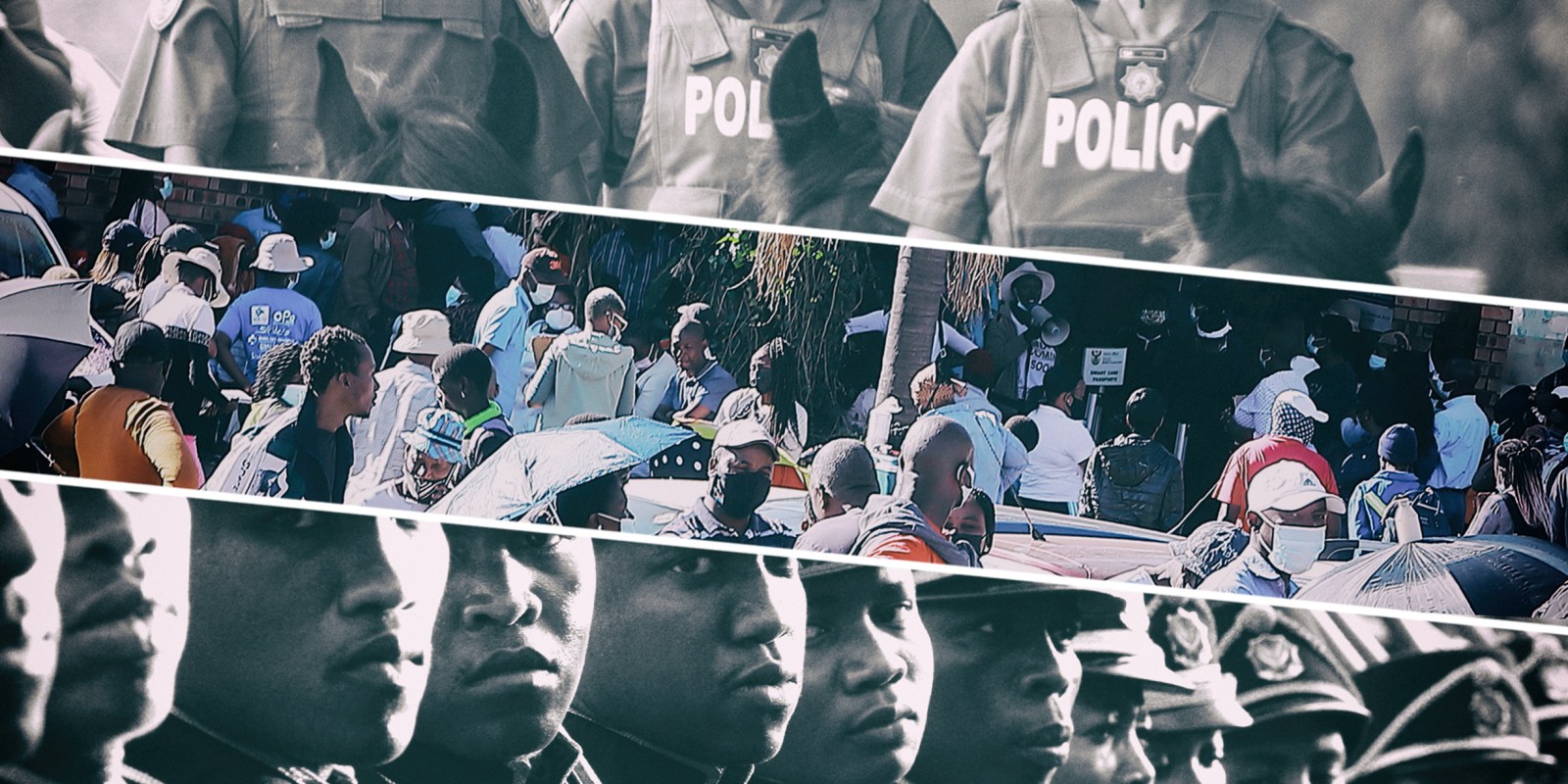 A capable developmental state and a professional, efficient public service — it’s all there in the 2012 National Development Plan, the 1997 Batho Pele quality service delivery principles and various State of the Nation Address pledges. Except it isn’t, not in real life.

Over the past 22 months, as Covid-19 lockdown restrictions racked South Africa, the 4am queues have steadily lengthened outside the Department of Home Affairs, the South African Social Security Agency (Sassa) and labour offices, traffic departments, clinics and hospitals.

With officials setting quotas for the day — quite arbitrarily; sometimes 30 people, sometimes 50 or 200, depending on the office and sometimes even the day — it’s usually left to security guards to monitor, control and regulate the long queues.

For the vulnerable and poor, accessing IDs and birth certificates, grants, unemployment benefits and healthcare carries the risk of repeatedly having to find transport money to return. For the more flush, unwilling to spend a day in snaking queues, the option exists of paying someone else to queue, as such services have sprung up.

No matter the talk of the Fourth Industrial Revolution and digital economy, South Africa’s public service has not found a way to ensure user-friendly, reliable online service delivery that doesn’t require repeat visits to official offices.

Even under the eased restrictions of Adjusted Alert Level 1, workplaces, and definitely not government frontline services, remain only partially operational.

The labour elite represented by trade union federations, including the governing ANC’s alliance partner Cosatu, have invoked health and safety to maintain rotational frontline staff work schedules. Union muscle has opposed the vaccination mandates that may well facilitate a full return to work.

“A developmental state brings about rapid and sustainable transformation in a country’s economic and/or social conditions through active, intensive and effective intervention in the structural causes of economic or social underdevelopment,” said the 2012 National Development Plan (NDP), South Africa’s blueprint adopted by Cabinet and Parliament to eradicate poverty and reduce inequality by 2030.

“[Developmental states] also recognise the importance of building constructive relations with all sectors of society, while insulating themselves from capture by sectional interests.”

The State Capture commission, both in testimony and in its reports, shows this has not necessarily happened. As do the Auditor-General reports (which still outline how public servants do business with the state even though this is banned in law and regulation), Special Investigating Unit probes and research and surveys by academia and civil society.

Despite the capable developmental state and a professional public service being government priorities for years — the governing ANC’s 2007 Polokwane national conference resolved to build the developmental state — it has stalled amid politics and implementation paralysis.

As far back as 2012, the NDP crisply talked of the need to urgently stabilise the “political-administrative interface”, effectively the interaction of ministers, politicians and directors-general — the administrators.

This remains relevant and pressing.

Daily Maverick understands the officials are of various levels of seniority up to the level of deputy director-general and include at least two public service staffers who have worked with Sisulu since the late 1990s. Why they, and the others, decided not to move this time is another question.

Already the Human Settlements chief financial officer and two deputy directors-general have been told by the new minister to stay home until their initial contracts end, variously between January and March, after a legal opinion showed these had been improperly extended, according to the Sunday Times.

Human Settlements Minister Mmamoloko Kubayi told Daily Maverick she had requested her department to get advice on “how to proceed with nine staff members, who were in the ministry, but are not attached to any posts in the public service”.

That advice would be awaited as all appointments must comply with the Public Service Act and regulations.

Ministry staff, however, are political appointments linked to the minister’s term, with Kubayi having retained her team since being made a minister in 2017.

“Those who are permanent must be seconded from their positions, which must not be filled during the period of secondment. When their secondment ends, they return to their posts,” the minister said, adding that efforts to professionalise the public service were critical.

“Hence, we must appoint people with the right qualifications and skills to suitable positions and above that, ensure that there is no conflation of political office appointees and public servants.”

But this “political-administrative interface” remains steeped in tension — even if the Public Service Act in Section 12 says DGs must be appointed by the Presidency, and in practice, the Cabinet also approves all DG and deputy DG appointments.

On 1 February, MPs heard how Public Works Director-General Sam Vukela remains on special leave after 19 months at a cost of “about R3.3-million” as the disciplinary hearings of December 2021 are set to continue later in February.

“Nineteen months at home is not a good story regarding use of resources of the state,” acknowledged Minister in the Presidency Mondli Gungubele.

It’s the second time Vukela has been suspended in the past decade. He was one of three permanent and acting DGs suspended in the Nkandla debacle over taxpayer-funded upgrades at then-president Jacob Zuma’s KwaZulu-Natal homestead.

After the National Prosecuting Authority declined to prosecute and with no pending departmental disciplinary steps, Vukela had returned to office, according to a June 2016 parliamentary reply.

In October 2018, the Presidency secured a settlement that Public Enterprises DG Richard Seleke would depart before the end of his term. After claims emerged before the State Capture commission of his role in Gupta deals, he was put on special leave.

“The settlement is in terms of the public service rules that are administered by the Department of Public Service and Administration (DPSA),” according to a Public Enterprises statement then.

In April 2018 President Cyril Ramaphosa moved DG Arthur Fraser from State Security to Correctional Services in the fallout over the Inspector-General of Intelligence probe of his parallel spy operations, or the Principal Agent Network. Fraser’s DG contract was not renewed after it expired in late September 2021.

Those minister-DG tensions go even further back, including the bruising 2010 fallout between former communications minister Siphiwe Nyanda and his DG, Mamodupi Mohlala-Mulaudzi, who was ultimately moved to head the National Consumer Commission.

A decade after the NDP call to prioritise that urgent stabilisation of this political-administrative interface, a developmental state with a professional civil service delivering quality government services still seems far off.

What has unfolded instead is that the Presidency increasingly becomes involved. It’s partly because of public service legislative and regulatory changes as far back as 2007, but also as politicians kick issues to touch and seek shelter in collective responsibility, even if this triggers policy and governance instability.

Perhaps it’s best illustrated by the issuing and withdrawal in December 2021 of the National Department of Health’s circular ending Covid-19 track and tracing, testing, and reducing the isolation period, if symptomatic, to seven days, and canning isolation if asymptomatic.

Issued on 23 December 2021, the circular, which was based on the advice of the Covid-19 Ministerial Advisory Committee, was withdrawn on 28 December. An avalanche of comments was cited as a reason in the official statement, which added the circular would “be reissued once all additional inputs and comments have been considered”.

But the announcement came after a special Cabinet meeting on 31 January 2022 that followed a meeting of the National Coronavirus Command Council, that was established by presidential letter to include all ministers in a structure that is regularly briefed by security forces, or NatJoints (National Joint Operation and Intelligence Structure), which is not established in law or regulation, and does not account to the public.

“The ministers of health and basic education will in the coming days issue directives reflecting on this new approach,” said the official Cabinet statement.

But important actually are the tweaks to the current National State of Disaster regulations that fall under Cooperative Governance Minister Nkosazana Dlamini Zuma.

“No person, who is a confirmed laboratory positive Covid-19 case, and is symptomatic, may refuse to be treated or be admitted to a health establishment for treatment or isolation in order to prevent transmission,” state the revised published National State of Disaster regulations Dlamini Zuma signed on 1 February 2022.

Like the initial 2020 Covid-19 regulations, court-issued warrants for quarantine and isolation remain part of the arsenal of state power.

It’s the strongest signal yet that the government is not willing to give up its extensive (political and securocrat) controls.

But such control is not the same as creating a capable developmental state and professional public service, regardless of what Ramaphosa may announce in Thursday’s State of the Nation Address. DM