2022 STATE OF THE NATION ANALYSIS (PART ONE) 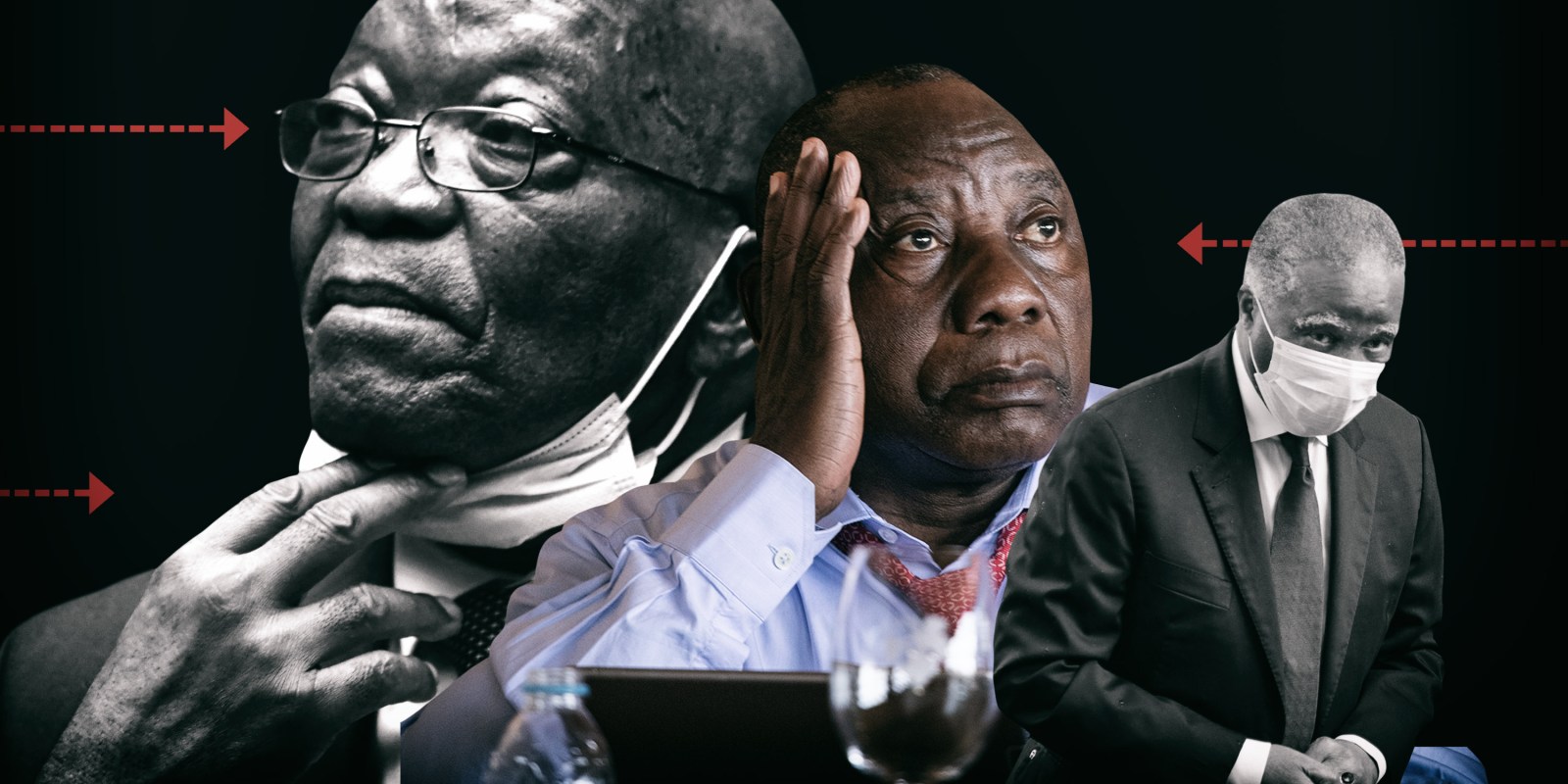 When President Cyril Ramaphosa delivers his State of the Nation Address on Thursday, he does so as the president of South Africa. And yet, as a self-described ‘party man’ — as he told the State Capture commission — he remains enmeshed in his governing ANC’s factional politicking.

The ANC description of itself as “a broad church” signified its ability to draw together and represent anyone from anywhere — from hawkers and hustlers to workers across economic sectors, middle-class professionals, business and the wealthy.

But it’s also come to include so-called tenderpreneurs, or those who exploit political connectivity for contracts. Controlling what ANC lingo calls “the levers of state power” has led to networks of patronage, nepotism and contracts for gratifications.

The State Capture commission raised the lid on the permutations, complexities and various sophistication of such abuse of public funds for personal gain. But so have the reports of the auditor-general over the years and research by both government and civil society institutions.

It stretches from the multibillion-rand arms deal saga in the late 1990s through to the Nkandla presidential homestead debacle to the more recent Covid-19 personal protection equipment (PPE) tender corruption of hundreds of millions of rands, and counting.

Against this backdrop, public trust has dipped in politicians, governance and public institutions, according to just about any polling service.

The 2021 local government elections rammed this home, and no looking for scapegoats will change that. The ANC dropped to 45.5% and managed to win outright only two of the county’s eight metros, Mangaung and Buffalo City Metro.

It’s a worse outcome than in 2016 when the ANC lost control of the country’s economic hub of Johannesburg, the administrative capital Tshwane and the Eastern Cape industrial core of Gqeberha.

Although in 2021 the Eastern Cape’s 62% polling support carried the overall ANC numbers, even in that province, loyal ANC families decided to skip casting their ballots and stay at home. This signals a civic disengagement that not only the governing ANC should be concerned about.

In an ANC elective year, as is 2022, the political noise of the ins and outs of ANC jockeying for positions will be loud and undoubtedly titillating.

But this spectacle of politics has devastating consequences. Until the party votes are counted and the new leadership announced, few in the ANC — wherever they find themselves, even in government — would risk making moves as this may backfire in the factional sands.

Thus is embedded the paralysis already in place in slack governance decision-making and policy implementation slowed further by the ANC’s emphasis on collective responsibility. It’s a one-for-all and all-for-one approach that effectively shields governance accountability and transparency.

Thursday’s State of the Nation Address (Sona) is widely expected to say something about a basic income grant (BIG), or monthly financial support for those between the ages of 18 and 59.

But already a year ago, the ANC flagged April 2022 for an announcement, even if that was described as “a very ambitious timeline” in documents to the January 2021 ANC National Executive Committee (NEC).

“A policy mandate is required by government from the current governing party, since the BIG was not part of its 2019 manifesto for its current term,” said the presentation by the NEC subcommittee on social development, recommending the extension of the R350 monthly social relief of distress grant.

A final report drafted jointly by the social and economic transformation NEC subcommittees was meant to be delivered to the committee by May 2021.

Earlier in January 2022, Ramaphosa consulted with business — the presidential economic advisory council was also involved — following the December 2021 release by the Social Development Department of a report on the appropriateness and feasibility of basic income grants.

The bottom line: as Covid-19 lockdown restrictions over the past 22 months have shredded South Africa’s socio-economic fabric, between party and state it’s taken a year and a bit to get to this point.

Most ANC policies — jobs, housing, fighting crime and corruption, infrastructure spending — have remained the same across several elections regardless of their at-best tepid impact on poverty, inequality and joblessness.

But just because you say it, no matter how pretty the words and how tightly choreographed and controlled the optics, it does not mean it will become reality.

Not in the Union Buildings. Not in Luthuli House.

As far back as 2005, if not longer, the ANC pledged to act against corruption — and for renewal and unity.

“They [branches] are conflict-ridden and unstable and in many instances fraught with fights over leadership positions, selection and deployment of councillors, tendering and control of projects and recruitment of membership in order to serve factional or selfish interests,” according to then secretary-general Kgalema Motlanthe’s report to the 2005 National General Council (NGC), or mid-term assessment.

Two weeks earlier, then-president Thabo Mbeki told a joint sitting of Parliament he had sacked his deputy, Jacob Zuma, after he had been drawn into bribery related to the late 1990s Arms Deal scandal. The NGC backed Zuma to stay on as deputy in the party.

Coincidentally, political meandos and kicking to touch meant Zuma entered a not-guilty plea only in May 2021 some three years after charges were reinstituted, but the trial is yet to get under way amid further legal wrangling.

“Conference therefore instructs the incoming NEC to make its urgent priority to deal with all issues that must help to restore the unity and cohesion of the movement so that by the time we go to the 2009 elections and the centenary our movement marches together in unison.”

The 2007 Polokwane conference resolutions not only proclaim unity and renewal, but also anti-corruption.

Yet by July 2017, then ANC secretary-general Gwede Mantashe’s diagnostic organisational report to the Nasrec policy conference was scathing.

The ANC was perceived as “inherently corrupt”, according to the report that also acknowledged “the public outcry about the influence of the Gupta family” on the state.

“Prominent issues for the people were employment, corruption, and crime; ahead of basic services. Research also identified factors influencing the mood of voters, also creating doubt about our ability to govern, ahead of the 2016 local government elections…”

The 2017 diagnostic report includes as the ANC’s problems “growing trust deficit between the people and their movement”, “impact of the perception of the ANC as entirely corrupt”, and “[d]ivisions and factions that have become a seemingly permanent feature of the movement”.

The Mzimvubu water project ran like a thread through several of Zuma’s Sonas, but today remains unfinished.

Mbeki’s Sona promise that pit toilets would be eradicated by the end of 2007 remains elusive.

For Ramaphosa, the prioritised spectrum auction to release broadband, announced in his first Sona in February 2018, remains outstanding.

It’s not that the plans don’t exist. They do, right down to minutiae like the government increasing its purchases from agricultural cooperatives.

Like subcommittees, task teams, inter-ministerial committees and advisory councils, Powerpoint presentations are aced. But it is responsiveness, transparency and urgency that’s MIA as political factional and other shifting sands must be aligned not only in its NEC, but also in government.

Thus it took the better part of a year to move from ANC NEC discussions on its “reconstruction and development programme” — running parallel were discussions at the National Economic Development and Labour Council (Nedlac) — before Ramaphosa announced the Economic Reconstruction and Recovery Plan in a special parliamentary sitting in mid-October 2020.

Ramaphosa’s economic recovery plan: Mixed all-sorts, most of which we’ve seen before

And then in January 2021, the ANC NEC lekgotla was briefed — again — on what the government was doing.

Sometimes the unexpected drops — Ramaphosa’s June 2021 announcement raising the licensing threshold to 100MW embedded generation, up from 1MW and double that business had sought and well over the 10MW the Mineral Resources and Energy Department had dug in at. It may well be that the Stage 4 rolling power outages facilitated a coming together of favourable factors, so to speak, that allowed Ramaphosa to act. But rare are such moments when ANC political and governance snags can be sidestepped.

The exception cannot be wishfully thought of as the rule — or as the state of the nation.

Juggling the interests, personalities and dynamics to keep the ANC together is an exhausting, never-ending effort that by its Byzantine manoeuvring creates paralysis — not only at Luthuli House, but also at the Union Buildings.

The signs of further civic disengagement are there for everyone to see. Without a fundamental shift, the controlled optics, pretty words and pledges of Thursday’s Sona simply keep afloat the politicians’ bubble. DM