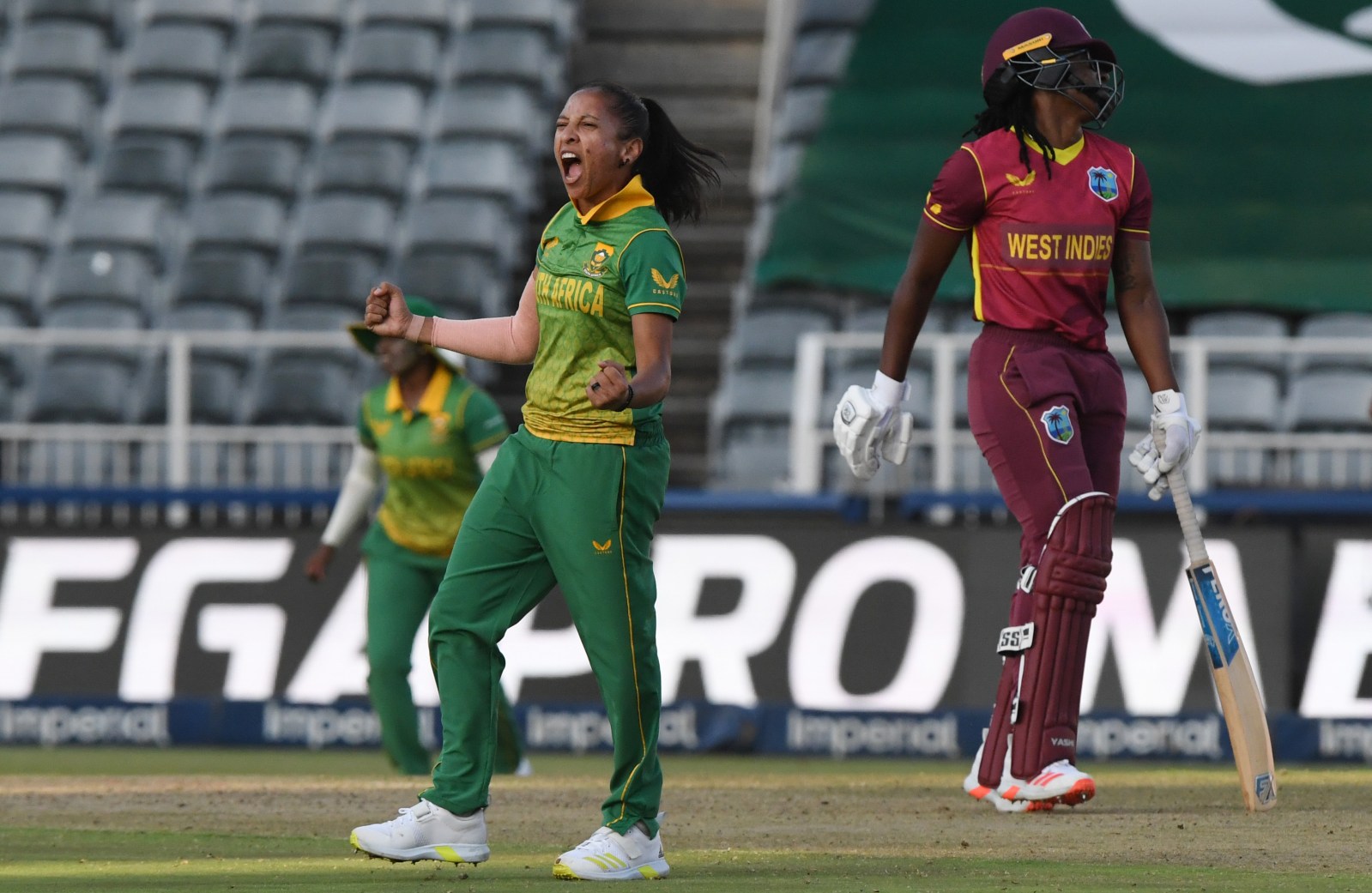 Shabnim Ismail takes a wicket that triggers the super over and celebrates with teammates during the 2nd One Day International match between South Africa and West Indies at Imperial Wanderers Stadium on January 31, 2022 in Johannesburg, South Africa. (Photo by Sydney Seshibedi/Gallo Images)

Proteas women stand-in skipper Suné Luus says the rainy and damp weather the team has encountered since their One-day International series against the West Indies began may serve them well at the World Cup.

As they continue the final preparations for their quest for world domination in New Zealand a month from now, the Proteas agonisingly lost the second of four One-day Internationals (ODIs) that they are set to play against the visiting West Indies.

The South Africans were beaten by six runs during a super over tussle with the Windies. The penalty shootout that is the super over came after both sides ended their respective innings on 160 all out. Due to a rain delay, the match had been reduced to 41 overs.

The West Indies posted 25 from their super over, with SA seamer Shabnim Ismail unable to restrict the rampaging Deandra Dottin — who had earlier top-scored for the islanders as they tried to chase down the Proteas’ initial total. Dottin smashed 19 off just five balls to hand her side the advantage.

For South Africa, captain Suné Luus says the conditions they have encountered at the Wanderers stadium in Johannesburg since the series commenced, are not too dissimilar to conditions they are likely to encounter at the World Cup in New Zealand.

“It was quite difficult [to bat] early on. We had a lot of rain yesterday (Sunday) and this morning (Monday), and throughout the night as well. So, the openers felt it was a bit sticky and too pacy. That made it difficult for them to play their natural game,” the Proteas captain said.

“They had to be wary upfront; build a partnership and platform for the middle order to come and explode. But even when I went in [to bat] later in the game it was still tricky,” added Luus.

“In some places where we’re going [to play during the World Cup] the conditions might be a bit similar. I know there’s a lot of rain around in New Zealand, and at most of the places we’re going. So, these are ideal situations for us to be in and prepare ourselves. The wickets are similar to New Zealand as well. So, it’s good preparation.”

In spite of the tricky conditions encountered, opening batters Laura Wolvaardt and Brits laid a decent foundation for those who would follow after them.

The pair put on a 50-run partnership upfront before Wolvaardt became the first victim of player of the match, Chinelle Henry. The next over, Brits was also sent packing after being tangled by the web of spinner Karishma Ramharack.

An over later Henry returned to dismiss Lara Goodall, leaving the home side dazed and confused after losing three quickfire wickets while scoring just five runs during that period.

Luus praised the bowling of the Windies, particularly their consistency in bowling troublesome line and length at the Proteas.

Of course, the South Africans’ own bowling display was vastly improved in comparison to how they struggled to contain the visitors during that eventually abandoned first match.

Particularly impressive with the ball in the second match was the experienced Ayabonga Khaka. The right-armer returned career-best figures of five for 26 in her eight overs.

“We went back to the drawing board after the first game and discussed where we could improve. When we look at the bowling, there’s a big improvement already. To contain them to the total that we had… The bowlers did extremely well. Now it’s just for the batting to fire as well,” Luus told journalists.

The teams will come together for the third ODI on Thursday 3 February. For that, both teams will hope that the rain finally stays away, while the Proteas willow-wielders will be aiming to swing into action and help the team bounce back to level the series. DM