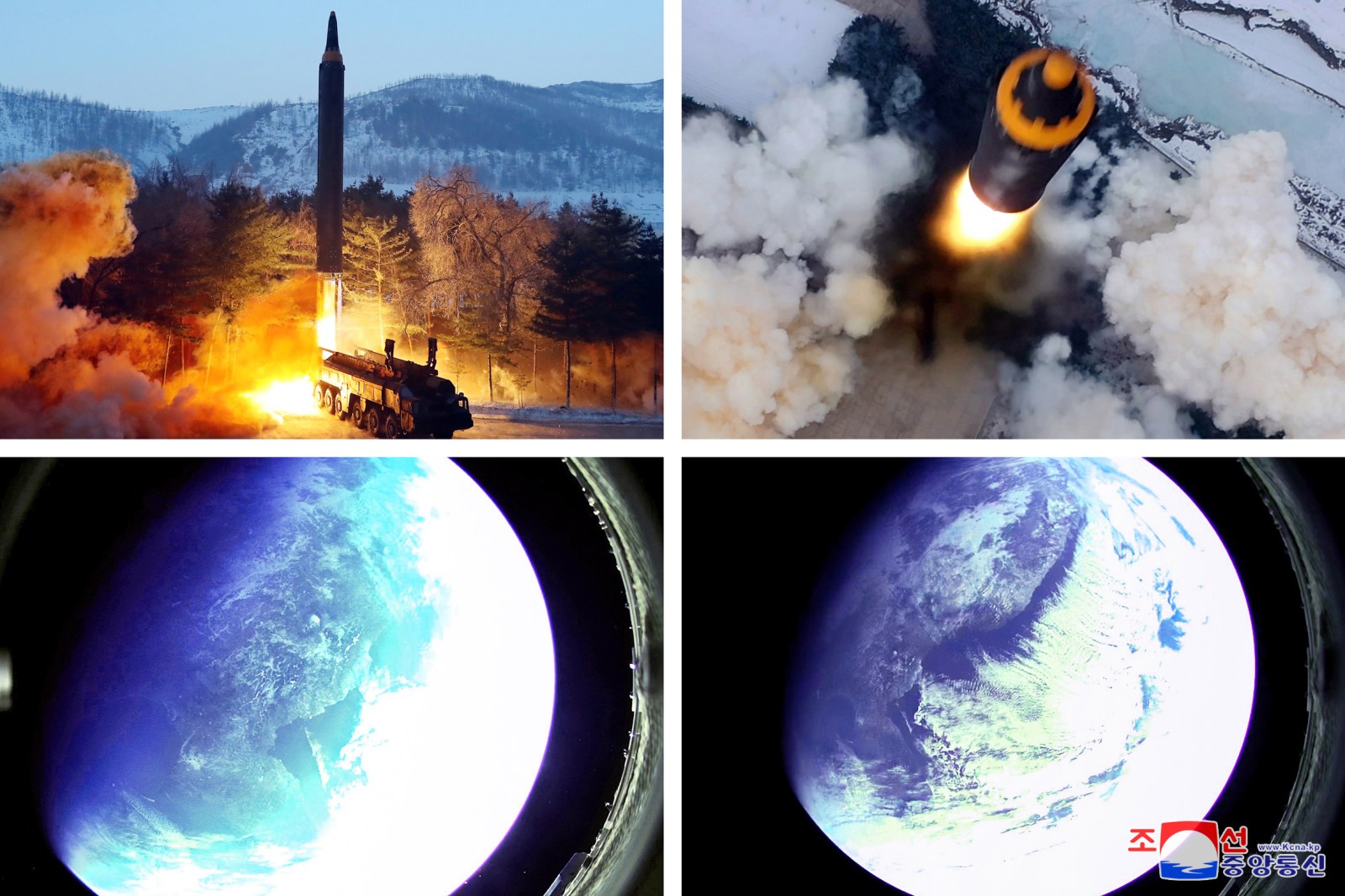 epa09719133 A photo released by the official North Korean Central News Agency (KCNA) of the evaluation test-fire of Hwasong 12-type ground-to-ground intermediate- and long-range ballistic missile was conducted under a plan of the Academy of Defence Science, the Second Economy Commission and other institutions concerned, from an undisclosed location, 30 January 2022 (realeased 31 January 2022) EPA-EFE/KCNA EDITORIAL USE ONLY EDITORIAL USE ONLY

It was the seventh conducted by North Korea this month and the first time a nuclear-capable missile of that size had been launched since 2017.

The launch was first reported by South Korean and Japanese authorities on Sunday, who condemned it as a threat to regional security.

KCNA said the missile launch was conducted in such a way as to ensure the safety of neighbouring countries, and that the test warhead was fitted with a camera that took photos while it was in space.

Photos released by state media showed space-based images of North Korea and the surrounding areas through a round camera lens. North Korea first took such photos in 2017, analysts said.

Leader Kim Jong Un was not reported to have attended the test, which was at least the seventh launch in January, one of the busiest ever for North Korea’s advancing missile programme.

Kim has said he is no longer bound by that moratorium, which included a stop to nuclear weapons tests and was announced in 2018 amid a flurry of diplomacy and summits with then-U.S. President Donald Trump.

North Korea suggested this month it could restart those testing activities because the United States and its allies had shown no sign of dropping their “hostile policies.”

The United States shares the concerns that North Korea’s escalating missile tests could be precursors to resumed tests of nuclear weapons and ICBMs, a senior U.S. official said on Sunday night, while urging Pyongyang to join direct talks with no preconditions.

“They are looking to take actions, which we believe are fundamentally destabilizing, as a way to increase pressure,” the official told a briefing of journalists in Washington. “I think that there probably is a component that is also to validate the systems that they’ve developed and further refine them.”

It is unclear if IRBMs such as the Hwasong-12 were included in Kim’s moratorium, but those, too, have not been tested since 2017.

Controversially, in two of those tests North Korea launched the missile over the northern Japanese island of Hokkaido.

In Sunday’s test, North Korea said it fired the missile on an elevated trajectory “in consideration of the safety of neighbouring countries.”

The Hwasong-12 has an estimated range of 4,500 kilometres (2,796 miles), which would put the U.S. territory of Guam and the far western tip of Alaska’s Aleutian Islands chain within reach, according to the Washington-based Center for Strategic and International Studies (CSIS).

By comparison, the largest, most powerful missile North Korea has tested to date is the Hwasong-15 ICBM, with an estimated range of 8,500–13,000 km, which could threaten anywhere in the United States, CSIS said. The Hwasong-15 was tested once, in November 2017.