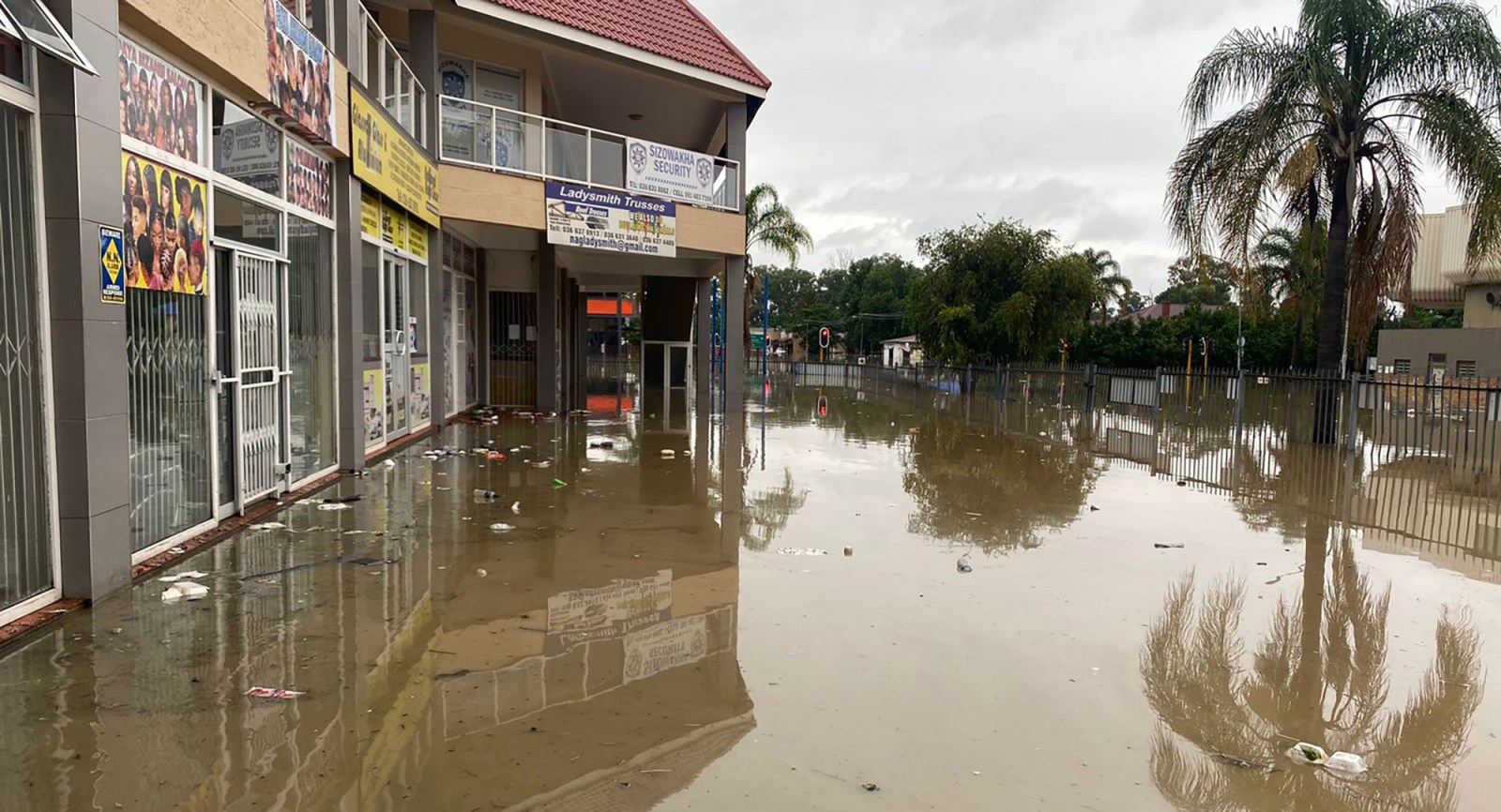 While officials continue looking for a 14-year-old boy believed to have drowned in flooding in Ladysmith, mop-up operations are under way as the question is asked: what could be done to prevent a similar incident happening again?

In Ladysmith in northern KwaZulu-Natal rain caused the Klip River to burst its banks and flood parts of the CBD, leaving residents and business scrambling to salvage what they could and make for higher ground.

Sihle Ziqubu (14) is believed to have drowned while trying to cross the swollen river. By Wednesday morning search-and-rescue teams were yet to recover his body as fast-flowing and deep water made the search difficult.

Thulile Ziqubu (33), Sihle’s mother told Daily Maverick that she doesn’t know what to expect. Ziqubu says she doesn’t want to lose hope that her son is still alive.

“I’m waiting for anything. I could give up but find that he might have swum and found his way to safety and that he might be alive somewhere. At the same time I’m thinking that if he is gone I want to find his body,” said Ziqubu.

“I kept thinking that someone would wake me up and tell me that I was having a terrible dream,” she said.

Ziqubu’s only hope of finding her son is the search team. She says she understands that due to the river’s condition the search party has been unable to go out but as the water levels have subsided she is hoping the search will resume.

At least 70 residents had to be evacuated from flooded areas in Ladysmith and moved to the Indoor Sports Centre.

Cooperative Governance and Traditional Affairs spokesperson Senzelwe Mzila said the Uthukela District Municipality was compiling a report that will identify the flood damage to businesses in the area.

Several schools were unable to open on Wednesday due to the damage caused by flooding. In some cases, teachers exchanged chalk for mops as they tried to clean up.

Mzila said that once the damage report was compiled the department would be able to come up with a tailor-made plan to provide support to those affected.

This is not the first time the town has flooded.

According to research, since it was established the town has suffered severely from flooding of the Klip River. During the 110 years up to 1997, with the completion of the Qedusizi Dam, 29 serious floods occurred.  Minor flooding occurred almost every year.

The worst flooding in 30 years came in 1996, leading to R500-million in damages and the evacuation of 400 families. Efforts to control flooding date to the 1940s.

Meanwhile, the Ladysmith Chamber of Commerce has said it is critical that the municipality investigates the root cause of the problem.

Speaking to Daily Maverick on Tuesday, chamber manager Jennifer Wallace said the recent flooding in the lower part of the Ladysmith CBD was “devastating” for businesses and “created chaos with traffic flow in the town, especially as the N11 was closed and all traffic was diverted through the Main Street”.

“It is imperative that the municipality investigate the root cause and resolve the issue as soon as possible,” she said.

The chamber would be engaging the municipality on the issue.

Assistant manager for traffic Joseph Hlatshwayo said several roads have been reopened after the water subsided.

“The roads are open as the water is now gone. The situation is almost back to normal. At the moment people are cleaning as most places have mud. Businesses are also busy cleaning up,” he said.

The taxi industry in the area doesn’t know if it will recover from the effects of the floods.

On Tuesday, the regional chairperson of the South African National Taxi Council (Santaco), Thembokuhle Ndawonde, said the industry and the community had been hit hard.

“We are really disturbed. Our cars have not been working since the flooding started,” said Ndawonde.

Residents had been affected since they couldn’t travel to the CBD to buy stationery, uniforms, food and other basic items.

According to him, shops selling stationery and other basic items have had to set up temporarily close to residents.

Ndawonde said each taxi was losing at least R1,500 a day.

“What concerns us is that we don’t know how we are going to pay our instalments for the vehicles. Our children do not have stationary as we have been hoping to make enough money to buy stationary, uniforms and pay for school fees,” he said.

The industry hopes that the government will give them relief.

Ndawonde expressed concerns about the size of Qedusizi Dam, saying it might not have enough capacity. He also said the drainage system in the town has always been a worrying factor as they have had experiences of water not being drained after heavy rains. What had happened was worse than everything they had experienced previously.

Heavy rainfall in Uthukela District, particularly in Ladysmith, led to the town being submerged.

Mayor of Alfred Duma Local Municipality Zama Sibisi said recently the flooding was due to an influx of water into the Klip River, causing an excessive flow into the Qedusizi Flood Attenuation Dam.

“The dam was constructed in October 1998 by the Department of Water Affairs and Forestry in an effort to reduce the risk of flooding in the low-lying area of Ladysmith,” he said.

“Let’s all observe patience and willingness to be guided beyond normal standards and routines as everyone is in a rush. This is required from both motorists and the public,” he added. DM/OBP