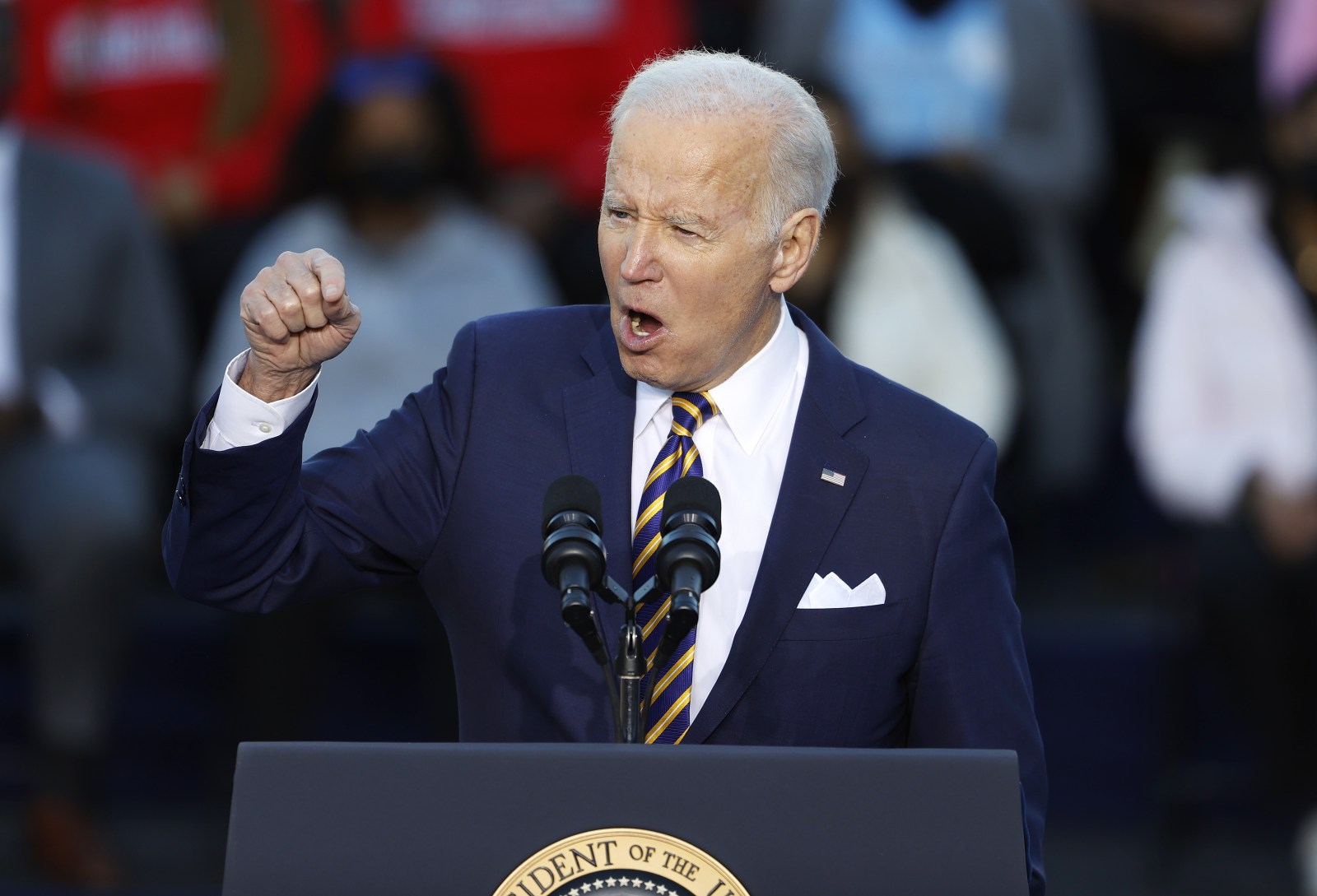 US President Joe Biden delivers a speech on voting rights on the campuses of Clark Atlanta University and Morehouse College in Atlanta, Georgia, US, on 11 January 2022. (Photo: EPA-EFE / ERIK S LESSER)

Speaking in Atlanta, Georgia, on Tuesday, US President Joe Biden described state legislation limiting voting access as an existential threat to US democracy. He vowed to pass bills in the Senate aimed at protecting voting rights across the country.

In some ways, the story of the US 2020 elections was the story of Georgia. It flipped from red to blue as voters backed Joe Biden, the first Democratic presidential candidate to win the state since Bill Clinton in 1992, largely due to the efforts of a group of first-time, female candidates who rallied black voters. Georgia’s secretary of state resisted Donald Trump’s calls to “find” the 11,780 votes needed to overturn the results, which the former president maintains were fraudulent.

Georgia also symbolises the Republican pushback. Reeling from their loss and buoyed by misinformed public perceptions of voter fraud, in 2021 Republicans in Georgia passed legislative reforms to limit access to voting rights, seen as targeting the same minorities that supported Biden, a move that has been replicated in at least 18 other states.

Speaking in Atlanta on Tuesday, Biden described state legislation limiting voting access as an existential threat to US democracy. He vowed to pass bills in the Senate aimed at protecting voting rights across the country, even if it means changing the institution’s filibuster rules, which Republicans have used four times in the last year to prevent the Freedom to Vote Act and John Lewis Voting Rights Advancement Act from being debated. As things stand, his efforts are likely to fail.

“The goal of the former president and his allies is to disenfranchise anyone who votes against them. Simple as that. The facts won’t matter. Your vote won’t matter. They’ll just decide what they want, and then do it,” said Biden.

Drawing historical comparisons, he asked legislators to decide whether they were on the side of racists or reformers: “The question is, where will the institution of the United States Senate stand? Every senator, Democrat, Republican and independent will have to declare where they stand – not just for the moment but for the ages.”

The 2020 elections saw a record turnout and according to officials were the “most secure” in US history, but Trump’s lies about election fraud have justified Republican states’ moves to limit voting rights, including imposing restrictions on mail-in voting, the use of mail-in drop boxes and new ID requirements. The laws also include provisions to transfer more power over elections – how they’re run, how votes are counted and who’s in charge – to elected officials rather than administrative election staff, who are largely seen as non-partisan.

New laws in Georgia mean voters will have less time to request absentee ballots, and will introduce strict ID requirements for absentee ballots, ban the offering of food or water to people waiting in voter queues, essentially ban mobile voting centres, and make it more difficult to extend voting hours if problems arise.

Republicans say such changes are meant to protect the integrity of elections, but critics say they’re clearly aimed at limiting access for minority voters who have utilised mechanisms like absentee voting and are more likely to vote Democrat.

At the same time, states have been undergoing a redistricting process, dividing voters into districts to match population changes, which happens every 10 years according to census data. The process is fraught with gerrymandering, where a party will distort district voting maps to gain an advantage, with Republicans expected to flip multiple Democratic seats in upcoming elections due to what’s been described as the most expansive gerrymandering process since the 1965 Voting Rights Act was passed.

Currently, it’s illegal to draw district boundaries based on race but not on partisan interests. According to legal centre PlanScore, new districts drawn in North Carolina, for example, mean that if voters are evenly split between Republicans and Democrats, Republicans will win the state’s House by a margin of 64 to 56 and its Senate by 32 to 18. In 2013, the Supreme Court struck down a law requiring federal approval for changes in electoral laws in nine southern states that have a history of racial discrimination.

Democrats are determined to bring the Freedom to Vote Act and John Lewis Voting Rights Advancement Act up for debate in the Senate on Martin Luther King Jr Day, 17 January. The former would limit states’ ability to restrict mail-in and absentee voting, prevent states from redrawing districts to limit minority voters’ representation and make Election Day a public holiday. The latter will restore elements of the Voting Rights Act that were cut by the Supreme Court in 2013.

The 100-seat Senate is split 50-50 between Democrats and Republicans, giving Vice-President Kamala Harris the deciding vote for Democrats. According to Senate rules, however, legislation needs 60 votes to bypass the filibuster and come up for debate. Republicans have shown no signs of buckling on the laws and Democrats are now turning their attention to changing the Senate filibuster rules.

“If the right to vote is the cornerstone of our democracy, then how can we in good conscience allow for a situation in which the Republican Party can debate and pass voter suppression laws at the state level with only a simple majority vote, but not allow the United States Senate to do the same?” asked Majority Leader Chuck Schumer in December.

Democrat Senators Joe Manchin and Kyrsten Sinema, however, have expressed opposition to scrapping the filibuster, meaning the party won’t have the numbers to change the rule. Republican Mitt Romney has warned that reducing the minority’s role in the Senate could have dire consequences should his party take both Houses in 2024 and Trump returns to power. During Barack Obama’s presidency, Democrats scrapped the filibuster so he could make key judicial appointments, which under Trump was expanded to include Supreme Court nominees, which he used to make three appointments to the apex court.

Democrat leaders are determined to force a showdown on the filibuster and voting rights legislation despite the holdouts within their own party. For activists like those who helped Biden win Georgia, the recent focus on voting rights is long overdue as Republican states make sweeping legislative changes that ensure the historic 2020 results are never repeated. DM168