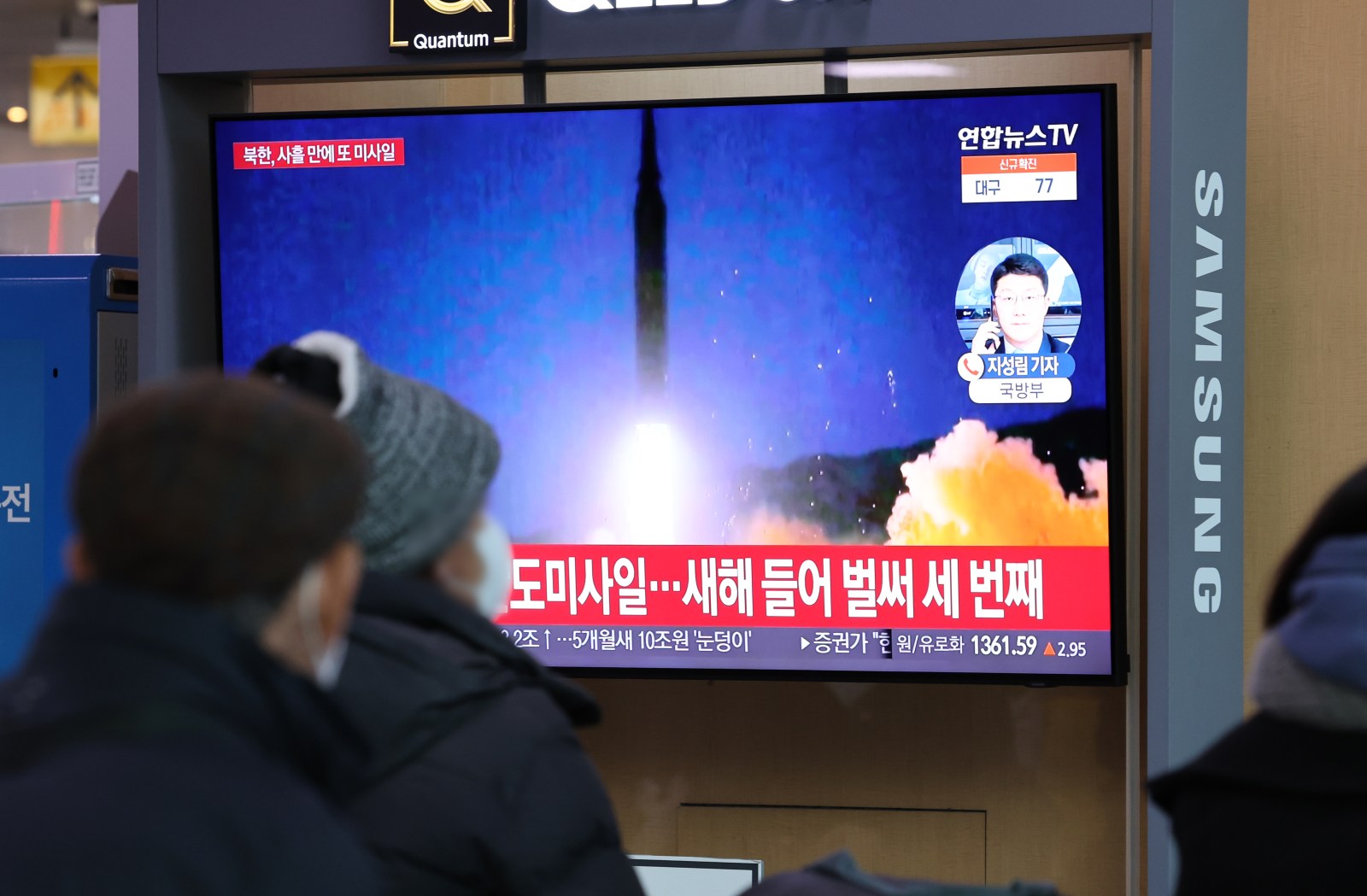 People watch news on North Korea's launch of two alleged short-range ballistic missiles into the East Sea at Seoul Station in Seoul, South Korea, 14 January 2022. The missiles were fired from North Pyongan Province bordering China earlier in the day, according to the Joint Chiefs of Staff. EPA-EFE/YONHAP SOUTH KOREA OUT

SEOUL, Jan 14 (Reuters) - North Korea fired at least two ballistic missiles on Friday, its third test in less than two weeks, just hours after criticising a U.S. push for new sanctions over the previous launches as a "provocation" and warning of a strong reaction.

Two weeks of missile launches by North Korea, retaliatory sanctions designations by the United States, and indignant statements by both sides raised the spectre of a return to the 2017 days of “fire and fury” threats before a flurry of diplomacy stalled and slipped back into a standoff.

South Korea’s National Security Council held an emergency meeting and expressed “strong regret” over the test and called on Pyongyang to return to talks.

“It emphasised that North Korea’s series of missile tests are not helpful for stabilising the situation of the Korean peninsula at this important time, and urged North Korea to swiftly respond to calls for dialogue,” the presidential Blue House said in a statement.

South Korea’s Joint Chiefs of Staff (JCS) said it had detected what it presumed were two short-range ballistic missiles (SRBMs) launched eastward from Uiju, in North Pyongan province on the North’s west coast, near its border with China.

Japan’s coast guard also said the North fired what could be a ballistic missile. The missiles appeared to have landed in the sea outside Japan’s exclusive economic zone, broadcaster NHK said, citing an unnamed Japanese defence ministry official.

“The actions of North Korea, including the repeated ballistic missile launches, are a threat to the safety of our nation and the region, and they are an important issue for all of international society,” Hirokazu Matsuno, Japan’s chief cabinet secretary, told a regular news conference.

The U.S. military’s Indo-Pacific Command said while it assessed that the launch did not pose an immediate threat to the United States or its allies, it highlighted the “destabilising impact of the (North’s) illicit weapons program.”

The launch is be the third since New Year’s day, an unusually rapid pace of such tests. The previous two were of “hypersonic missiles,” North Korean state media said, or projectiles capable of high speeds and manoeuvering after launch.

In contrast to Friday’s tests, each of the earlier launches involved a single missile fired from Jagang province, neighbouring North Pyongan.

Kim Dong-yup, a former South Korea Navy officer who teaches at Seoul’s Kyungnam University, said North Korea could have fired previously deployed SRBMs such as the KN-23 or KN-24.

“It could fit in their ongoing winter exercises, while sending a message to the United States through action following the state media statement,” he said.

North Korea defended the missile tests as part of its legitimate right to self-defence and said the United States was intentionally escalating the situation with new sanctions, state media said on Friday, citing the foreign ministry.

The North’s recent development of a “new type” weapon was just part of efforts to modernise its national defence capability, and did not target any specific country or harm the security of neighbourss, the ministry said in a statement on the KCNA state news agency.

The statement warned of an unspecified “stronger and certain reaction” if the United States adopted a confrontational stance.

“It’s obvious from their foreign ministry statement and test launch combo that North Korea is angry and protesting U.S. sanctions imposed after its recent tests,” said Duyeon Kim, of the U.S.-based Center for a New American Security (CNAS).

U.S. Secretary of State Antony Blinken said the United States had made clear it had no hostile intent toward North Korea and was willing to engage in talks without preconditions, but the tests were “profoundly destabilising.”

The North Korean foreign ministry said that while Washington may talk of diplomacy and dialogue, its actions showed it was still engrossed in its policy for “isolating and stifling” the North.

“The U.S. is intentionally escalating the situation, even with the activation of independent sanctions, not content with referring the DPRK’s just activity to the U.N. Security Council,” the ministry said.

Duyeon Kim of CNAS said Biden should continue to penalise North Korea for its missile tests and use sanctions to curb funding for weapons programmes, but if so, “We should expect to see more fireworks and provocations.”

By Josh Smith and Hyonhee Shin.