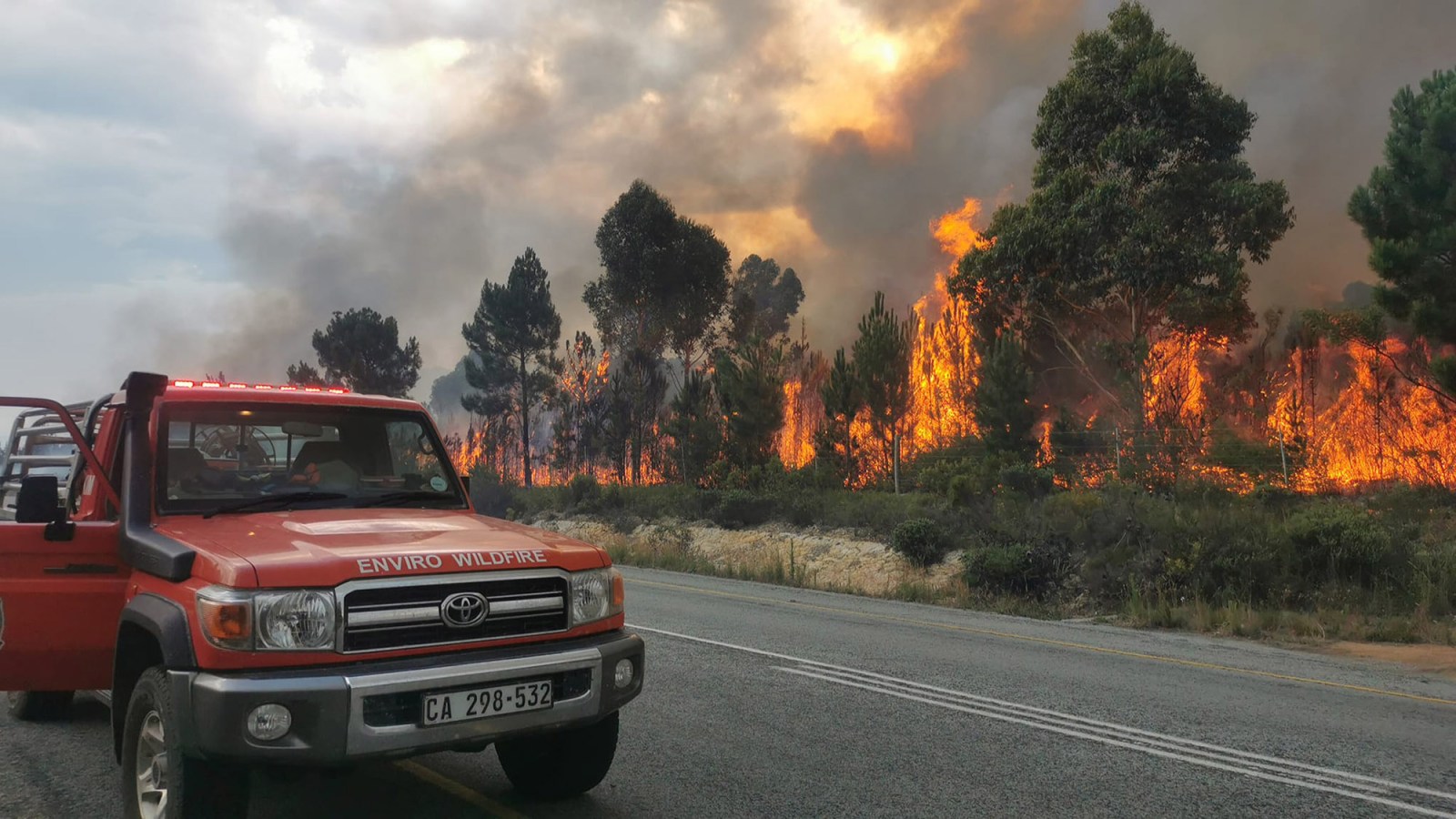 Firefighters in Kleinmond in the Western Cape. (Photo: Supplied)

For five days, firefighters have been fighting a wildfire that has burnt more than 5,000 hectares of land in Kleinmond in the Western Cape.

The fire, which started in the early hours of Saturday morning, was believed to have started on the Department of Forestry, Fisheries and the Environment (DFFE) property Highlands, above Arabella. The fire was burning in dense pine and slash in the direction of Perdeberg and Kleinmond away from Highlands Road.

Overstrand Municipality Executive Mayor Dr Annelie Rabie on Tuesday said the fire was 95% contained and only one structure had been destroyed.

Rabie said: “Our focus thus far has been on extinguishing the fire. Enviro Wildfire Services has been appointed to do a fire investigation and indications are that the fire originated on the DFFE property.

“The remaining hotspot on Perdeberg was successfully contained by CapeNature yesterday morning. Aerial resources have bombed the area since early yesterday morning and, supported by their relief crew, continue mopping-up operations.

“In Rooisand a burnout is under way to make the area safe. The forestry support programme, with Aubrey Thompson and his 22-person team, is on the line ensuring the line of the Highlands Road is safe.

“There are vehicles on the scene in Arabella to contain and deal with flare-ups as and when it happens and in Heuningkloof there are no active lines and hotspots being attended to.”

Rabie said an estimated 10 hectares of cultivated and sowed fynbos had burned in the area between Kleinmond and Arabella.

“Farmers between Rivendell and Botrivierplaas reported limited damage as it was all veld that burned, with minor damages to fences. This was due to the fast response from our farmers’ fire services.

“At the back of the Highlands mountain, including Tokara and access to the agriculture area of Elgin and the lower Botrivier farms, a mammoth effort from Overberg District Municipality, Cape Nature, Overstrand Municipality, DFFE and the Lower Botrivier Fire Management Unit did a burnout on the mountain, from the R43 to the Perdeberg nature reserve. This prevented fire spread on the farms with limited damages,” said Rabie.

DFFE Minister Barbara Creecy commended the 300 firefighters who had battled the blaze since Saturday.

“The Department of Forestry, Fisheries and the Environment notes with concern the fire that emanated in Kleinmond in the Western Cape. As a matter of course, the Fire Protection Association in the area is expected to compile a fire report regarding the facts pertaining to the source/origins of the fire,” said Creecy.

She said the director-general of the department had asked the acting CEO of SANParks to do an assessment of the fire.

“The services of SANParks have been enlisted, since they have internal capabilities to undertake an assessment of this nature. The scope of the assessment will include the origins and causes of the fire, whether fire breaks and other preventative measures were in place and any other factor that may have exacerbated the fire,” Creecy said.

She said once the assessment had been received and processed by the department, the findings and recommendations would be made public.

“The department’s Working on Fire (WoF) is on the ground and aerial resources continue to assist with suppression efforts at the fire in Kleinmond.”

Creecy said 169 firefighters and management, including pilots and helicopter support staff, five fire trucks, two transport buses and three bakkies had been deployed by WoF to assist fire authorities in the Overberg with continuous fire suppression efforts since Saturday, 8 January.

“Additional aerial resources remain on standby at Stellenbosch airfield and at Newlands fire base. The helicopters and planes have already made 284 water drops during 65 hours in the air.

“A structure has reportedly burned, with no loss of life thus far. Since the summer fire season officially began in the Western Cape on 1 December 2021; including Kleinmond, the team has assisted in fighting and suppressing 22 fires across the province,” Creecy said.

She said the fire in the Kleinmond area of the Overberg had been fuelled by high temperatures and gale-force winds.

“The wildland fire is also believed to have burnt more intensely in areas rife with alien invasive vegetation. However, fynbos, which are destroyed during a wildfire, are dependent on fire to germinate and thrive.”  DM/OBP