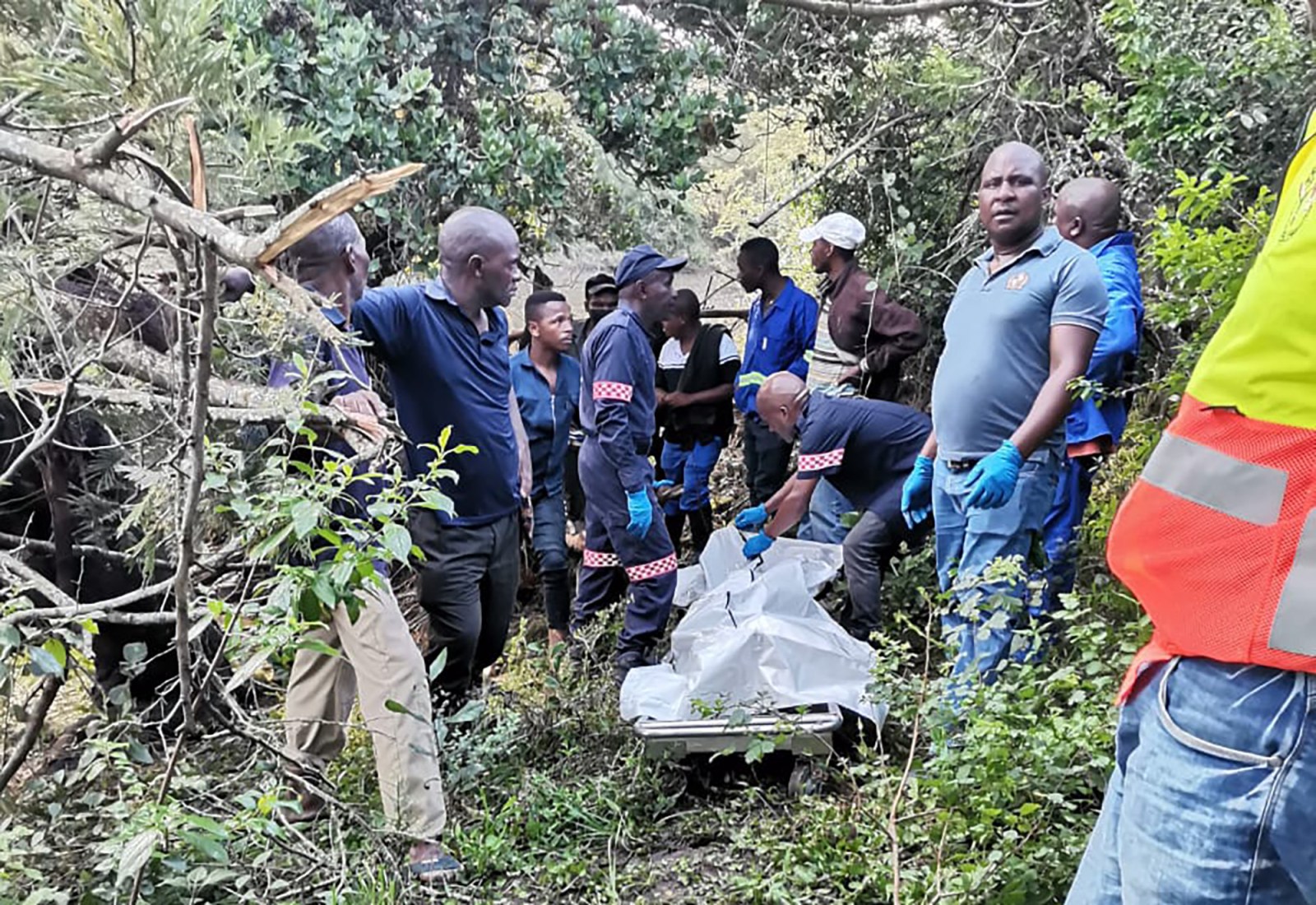 Eastern Cape Amathole District Municipality officials recover the bodies of three familiy members who died after their car was washed away by the flooded Shixini River. (Photo: Supplied)

After more than five years of drought, some parts of the Eastern Cape were happy to receive rain — but heavy storms have cost many lives and destroyed homes and roads.

Hundreds of people have been shifted to safety after torrential rains caused floods that killed at least 14 people and damaged houses in the Eastern Cape over the weekend.

Among the confirmed 14 dead is one of Eastern Cape’s most proficient South African Police Service divers, Captain Pierre Marx (53) who drowned while rescuing victims in East London.

According to Eastern Cape police spokesperson Brigadier Tembinkosi Kinana, Marx responded to a call to rescue four people who were believed to have been swept off the Horse Shoe Valley causeway.

Kinana said Marx and his team established that one person was on an island in the Nahoon River with the bodies of three people who had died in the floodwaters.

Kinana said the police team managed to take the three bodies across the fast-moving river.

After a successful rescue of the fourth person, believed to be a local farmer, Captain Marx struggled with a strong current that swept him away despite attempts by his colleagues to rescue him, Kinana said.

“He disappeared in the heavy stream and only to be recovered in the early morning of Sunday the 9th January 2022,” Kinana said.

He said the damage was still being assessed while an interministerial committee was being set up to “look at the best way that can be taken to provide relief to the affected families”.

“Some relief efforts are already happening as some families are receiving food,” he said. Communities were helping with accommodation for those who had lost their homes.

The weekend rains in BCMM have left scores of residents, mainly in the township of Mdantsane, displaced. Roads in some parts are completely submerged, making access to distressed communities more difficult.

BCMM has confirmed zones 1, 3, 9 and 18 as well as Joe Slovo informal settlement were among the hardest-hit areas in the sprawling township.

Metro spokesperson Samkelo Ngwenya said the municipality was attending to widespread flooding that had hit homes, particularly in informal settlements, and several roads.

“We have undertaken evacuations in Mdantsane Zone 1 and teams are on-site in Zone 3 and 18. We are working with ward councillors to provide disaster relief packages and alternative accommodation to the families whose homes have been swept or invaded by water,” Ngwenya said.

He said they were also working with the SAPS when rescue operations were stretching their resources.

In Potsdam, roads were damaged, houses flooded and more than 60 graves damaged. Lonwabo Yiliwe of Yiliwe Funerals has been helping to collect bodies in the cemetery, but the situation was improving.

“Families are traumatised and we hope that everything will be fine,” he said.

Ward 48 councillor in BCMM, Phumezo Jaxa, said the floods had caused devastation. About 49 families had been affected by fallen fencing walls, broken foundations and damaged houses. Roads have been badly damaged, he said.

The thunderstorm destroyed homes in parts of the OR Tambo district municipality, killing livestock, including 179 sheep, 13 goats and 41 chickens.

On Tuesday this week, OR Tambo District Municipality (ORDTM) spokesperson Zimkhitha Manqinana said the area had also been hit by the recent rains.

“In Nyandeni we lost two members of our community. One person drowned and another one was struck by lightning. Our teams are on site to assess the extent of the damage. Yesterday ORTDM Executive Mayor Mesuli Ngqondwana paid homage to the families of the deceased,” she said.

She said on Tuesday the SA Weather Service had issued yet another warning of expected severe weather patterns in the district. Manqinana cautioned communities to be extra careful.

“We are doing all we can to assist community members rebuild their lives, working together with various departments,” she said.

Manqinana said the Mqanduli Community Health Centre was flooded on Saturday and had been closed while the department of health mopped up.

“It’s expected to re-open on 12 January. Communities are urged to use other facilities during this period,” she said.

Amathole District Municipality (ADM) spokesperson Nonceba Madikizela-Vuso said they had barely recovered after the December storms that caused severe damage to property, vehicles and electrical cables across the area in December, and now another tragedy had occurred from heavy rains.

“In Shixini village, Dutywa, a car with four occupants was swept away by heavy rains resulting in three fatalities. Details of the deceased have not yet been released by relevant authorities. The four family members were from a funeral en route to their Dutywa home when their car was swept away by floods,” she said.

According to Madikizela-Vuso, the search for the three family members came to an end when their bodies were discovered in the Shixini River on Sunday afternoon.

Madikizela-Vuso said many households had been damaged in Mnquma and Mbhashe Local Municipalities including a school in Willowvale.

“ADM disaster teams have been dispatched to both municipalities and are working with ward committees and ward councillors to collate lists of affected communities. A multidisciplinary approach will be undertaken to ensure immediate social relief support to affected communities,” she said.

She said it had been agreed with the community that the affected families would not seek refuge at nearby community halls; however, a soup kitchen would be established at local churches.

ADM Executive Mayor Nceba Ndikinda said they had been saddened by the tragedy.

“No matter how much we need rain as relief to our drought-stricken areas, we do not want lives to be lost at that expense, our hearts are heavy and we send deepest condolences to the family,” said Ndikinda.

She applauded the hard work of divers and community members in ensuring that the families of the deceased found closure.

“On behalf of the entire ADM council I would like to express our heartfelt condolences to the families and community at large,” said Ndikinda.

On Tuesday, Alfred Nzo District Municipality deputy mayor Nomasomi Mshuqwana visited the families of the households who had been affected by the severe rain of the past few days in Matatiele.

Mshuqwana said that according to a preliminary report from the District Disaster Unit, 15 homes had been destroyed, leaving people homeless. The homes of 16 families were badly damaged in the storm.

“We brought temporary relief materials such as mattresses and blankets for those who lost their homes while they await a comprehensive intervention which will take place only when the relevant government departments have declared the disaster,” she said.

She said in the meantime, a local joint operations committee had been convened so departments such as human settlements, social development and home affairs could provide relief.

“We have informed upper structures of government about this disaster, so that we may be able to access much-needed support as the impoverished district that we are,” Mshuqwana said.

She urged people to heed SA Weather Service warnings of further storms in the next few days.

“It is by God’s work that we are fortunate that no lives have been lost in this process. We would like to plead with our people to remain safe when these heavy rainfalls persist,” Mshuqwana said.