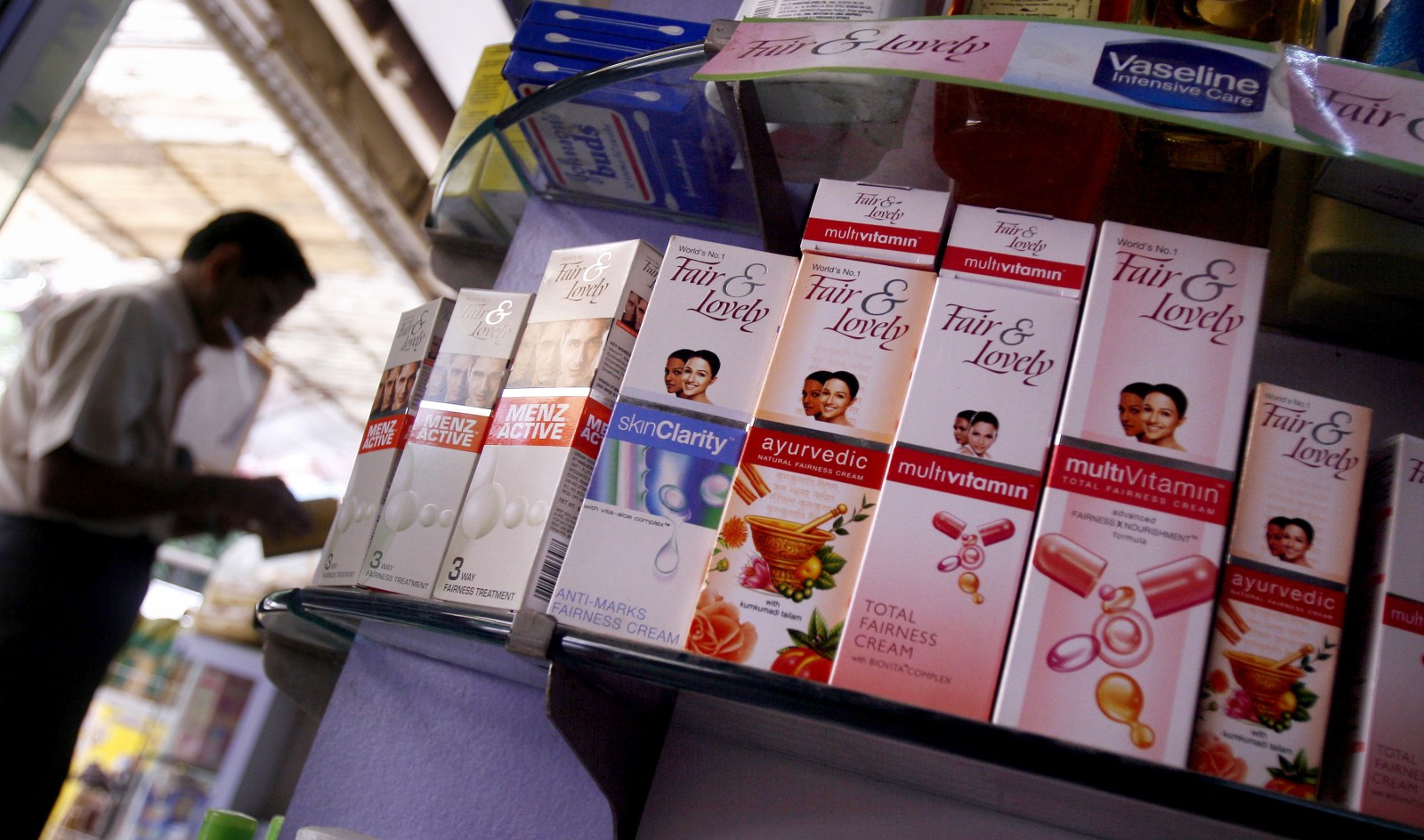 Fair & Lovely, a skin-lightening cream made by Hindustan Unilever Ltd., sits for sale on a store shelf in Mumbai, India, on Wednesday, Oct. 3, 2007. Unilever, the owner of more than 400 food brands from Dove soap to Magnum ice-cream bars, said third-quarter profit increased 37 percent as the company sold more household cleaners in Asia and Africa. (Photo by Prashanth Vishwanathan/Bloomberg via Getty Images)

Skin lightening products have been popular for more than 40 years among sub-Saharan African populations. But over the past decade, there appears to be an increase in use. The latest data would suggest that prevalence is as high as 72%.

The products, promoted by media and cosmetic houses as “pigment vanishing” or “tone lightening”, have been perceived to be beneficial. In reality, most of them can be very dangerous. This is because they are acquired illicitly and contain potent and toxic chemicals that can have bad side effects. They can lead to severe systemic complications like diabetes mellitus, tremors and exogenous ochronosis (dark patches of discolouration on the skin).

Several countries, including Uganda, Kenya and South Africa, have banned the import and sale of products containing skin lightening chemicals. Nevertheless, they remain available to consumers unlawfully because of the high demand for them.

Research in various African countries has shown this practice is increasing in popularity, with a prevalence of 23% in sub-Saharan Africa among young adults aged 16 to 30. This prompted us to investigate such a trend in South Africa. We recently conducted a survey on 401 health science students at the University of the Western Cape.

Only 12% of those in the survey used skin-lightening creams. Nevertheless, the survey gave useful insights into their reasons. Nearly half of the participants believed that family and friends were most likely to influence their behaviour. And an even higher percentage – 76% – said they thought that people who practice skin lightening do so because it gives them a more fashionable look.

There was also a clear urban-rural divide. Those living in urban settings were 10 times more likely to engage in the practice compared with people living in rural areas.

Our survey also showed that men and women were equally likely to use such products.

One might expect the use of skin lighteners to be far more common among women. However, studies have shown the practice is becoming equally popular among men in several parts of the world, including Africa and Asia.

In our survey 10% of the men interviewed said they used skin lightening products.

Studies investigating the motivations for skin lightening among men are limited. But a few provide some insights. One such study conducted in 26 countries showed a prevalence among young men in African universities in countries such as Nigeria, Tunisia and South Africa.

Users said they were motivated by the “desire for fairer skin” and the “need to be attractive for their partners”.

These findings were also supported by a Ghanaian study in which women stated that they found fair-skinned men more attractive.

The use of skin lightening products could also be attributed to men becoming more interested in grooming and the maintenance of their appearance.

So, the use of lightening products has shown to be driven by people’s concerns about their attractiveness. They wanted to increase their self-esteem, and knew friends and family who are using skin lighteners. These factors contributed to their engagement in the practice.

The role of media

The media clearly also plays a powerful role. In particular, the advertising industry in Africa has been pivotal in creating the perception that fair skin is more attractive and desirable.

Social media has also become an influential platform that several companies use to further encourage product consumerism. It would be rare to meet a student that does not have at least one social media account to use as a principal source of news and other information.

These platforms then act as a portal for influential local and international celebrities to share their latest cosmetic trends, some of which are very public about using skin lightening products. Undeniably, this makes an impression on young adults.

In our study, despite few participants indicating that social media was a direct motivator for skin lightening practices, the subliminal influence of this platform cannot be ignored.

The increased interest in skincare over the last few years has led to the exceptional growth and popularity of this market. In 2018 it was valued at $8.3 billion.

Laws in some countries, such as South Africa, prohibit the marketing of products using terms such as “bleach”, “lighten” or “whiten”. But cosmetic and pharmaceutical companies have always, and continue to find alternative ways to advertise directly to their target consumers.

For years this target has been women, but recently there has been a clear shift toward male consumers.

The skin lightening market will always be sustainable as long as the supply-and-demand chain remains.

The rising demand for harmful skin lightening products prompts the question as to whether the necessary vigilance in awareness around chemicals found in these products and their associated side effects have been illuminated enough. The answer to this makes studies like ours an ongoing journey. DM/ML

Farzana Rahiman is a lecturer at the University of the Western Cape. Lester Davids is a Professor and Director at C2L Scientific Consulting, University of Pretoria. Amy Thomas and Laurentia Opperman were also researchers in this study, which was led by Farzana Rahiman.