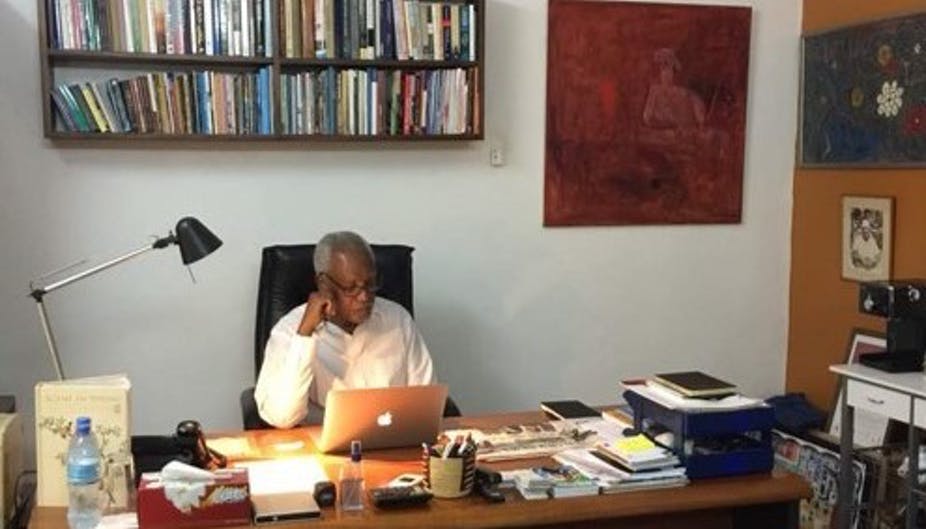 Walter Bgoya’s passion for reading goes back to the 1950s. But his worldview was shaped in the 1960s. Image supplied by the author.

A number of African countries boast notable independent publishing landscapes. These include South Africa, Zimbabwe, Nigeria, Ghana, Kenya, Uganda and Tanzania. However, this fragile industry has long been characterised by a host of threats.

Top of these is weak copyright law enforcement which undermines potential growth. Copyright infringements reduce earnings from legal sales. They also reduce the ability of independent publishers to break even and venture into issuing new titles.

For sure, school textbooks guarantee stable earnings for these publishers. But this tends to crowd out scholarly publishing and fiction. Another common problem is represented by underfunded and understaffed public libraries. This leads to failure to acquire new books and equipment, poor cataloguing and processing, and poor upkeep of existing books. This, combined with Africans’ dwindling purchasing powers, in turn causes decreased access to books and less interest in reading.

These challenges are well encapsulated by the trajectory of one independent Tanzanian publishing house: Mkuki na Nyota. I first encountered books by this publisher in 1996 as an undergraduate student of Swahili language and literature. But my research on the history of this publishing house only took shape in 2014 when I met Walter Bgoya, its managing director.

Bgoya’s passion for reading goes back to the 1950s. But his worldview was shaped in the 1960s. This was an exhilarating period of decolonisation, Pan-Africanism and – in his country – the ideals of President Julius Nyerere’s flagship ideology, Ujamaa, or African Socialism.

Ground-breaking anti-imperialist books like Walter Rodney’s How Europe Underdeveloped Africa and Issa Shivji’s Class Struggles in Tanzania were released under his watch. Rodney was then based in Dar es Salaam.

But by the early 1980s, Ujamaa was in decline and the country was facing a serious economic crisis. Amid government austerity measures imposed by the International Monetary Fund and World Bank, the publishing industry was not spared. Parastatals, the university press and independent companies faced under-capitalisation, escalating printing costs, and lack of basic materials like ink and paper.

This crisis was worsened by high taxes, weak distribution systems and the decline of public libraries. And so Bgoya slowly disentangled himself from the struggling state-owned publisher to establish Mkuki na Nyota.

What followed for Bgoya and his new business was a tumultuous journey through numerous financial, political and operational constraints. It is a testimony of his vision and tenacity that he eventually gained a footing by the 1990s, and went on to thrive.

Bgoya’s focus in the early days was on Kiswahili fiction, art, scholarly and children’s books. Thanks to partnerships with western donors, he successfully launched a children’s book project which put out nearly 80 children’s books in five years, both in Kiswahili and English. However, the unstable local currency caused high printing costs and limited print runs. Resources to strengthen the distribution networks were scant from the onset.

By the mid-1990s Bgoya was able to capitalise on lower printing costs in India, and later China. While he chose to edit Kiswahili fiction personally, he had to outsource freelance external editors for his English titles. Though in conflict with his cherished ideology of self-reliance, these choices enabled the publication of higher quality and cheaper books.

The growing visibility and global distribution of his output were facilitated by the establishment of the African Book Collective. This is a platform for African publishers funded primarily by the Swedish and the Norwegian agencies which would only become self-financing in 2007. Foreign donors provided funding, facilitated regional training courses, and sponsored international book fairs, through which independent African publishers grew their networks and expanded their markets.

Accepting donor patronage did not, however, extinguish Bgoya’s progressive and anti-colonial intellectual project that drew him into publishing. He held the view that donors interfered with publishers’ final decisions and with the needs of local readers.

To support new publications and curb donors’ interventions, he sought new sources of revenue that would sustain publishing. These included freelance editing, commissioned writing, consultancies on media and book publishing, and allowances from his membership of various boards of directors.

New challenges for independent publishers came in 2000. Donors suddenly withdrew after the adoption of the United Nations’ [Millennium Declaration], which listed universal access to primary education among its eight development goals. The declaration excluded publishing, higher education and teacher training. This so-called poverty reduction strategy caused the decline of key platforms for networking and marketing African books such as the Zimbabwe International Book Fair.

Another potential blow came in 2014, with the restoration of state monopoly on the lucrative textbooks market in Tanzania. Since 1991, private sector publishers had replaced the state monopoly enjoyed between 1966 and 1985. The renewed monopoly represented a major setback for independent publishers who relied heavily on the income generated from school texts. However, Bgoya’s Mkuki na Nyota was able to overcome this challenge thanks to a diversification strategy.

On the list of innovations was his investment in a print-on-demand equipment. With this machine, he could produce commercially sustainable books and avoid the vicious circle of high printing costs, unsold books and warehousing costs. Still, importing spare parts was expensive and local personnel was not trained to operate the machine, which became inoperative for some time.

Although Tanzanians do read for pleasure, books remain expensive in comparison to their disposable income. Authors tend to privilege English, the language of the learned minority, over Kiswahili, the language of the overwhelming majority. Thus English-language publications further shrink the already limited local reading public.

Despite a succession of different challenges, Bgoya’s approach has been consistent. Central to this is a commitment to progressive and quality books, participation in the publishing process through close interactions with authors, and the overall ability to keep producing what he set out to. The growing local and international prestige of his publishing house has afforded him new bargaining power through which he pursued his intellectual autonomy.

But the efforts of independent publishers should be accompanied by long-term practical interventions. Governments need to create conditions for writers to thrive. These include enforcing copyright laws, training of writers and publishers and streamlining language policies.

The funding of public libraries is vital too. It is the role of librarians and archivists to integrate print books with online services, e-books and multi-media activities. Well-stocked libraries have the potential to set a virtuous circle in motion: increased use of libraries can develop people’s appetite for reading. The result is more readers patronising and willing to read or buy books.

Notwithstanding the present challenges, independent publishing should maintain quality, innovation, and reasonable prices according to Bgoya. Books should influence public opinion, contribute to nationwide debates, stimulate an appreciation of reading and writing, and answer the needs of a liberating education and culture.

For more than thirty years, Bgoya has endeavoured to do just that. DM/ML

Maria Suriano is a senior lecturer in the Department of History at the University of the Witwatersrand.