​​A taste of Magoebaskloof 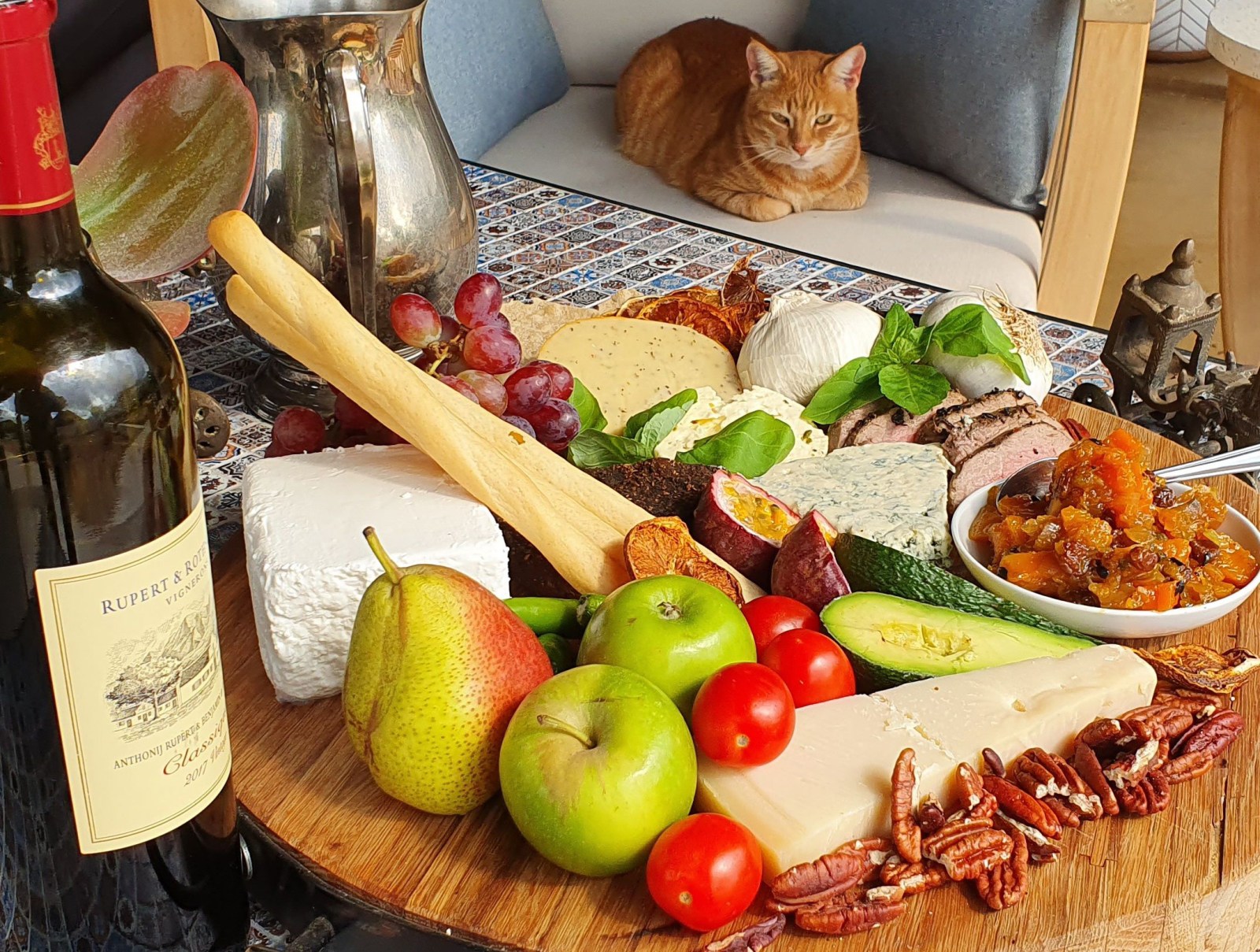 Enjoy a variety of local produce on the Graceland cheese and tapas platter. (Photo: Supplied)

There’s been a delicious food and drink uprising in Magoebaskloof, an enchanting mountain area in the north-east of Limpopo. It’s the result of four things: a craft beer rebellion, a gin revolution, an artisanal farm-to-fork awakening and a pair of style queens with the nerve to declare war on culinary mediocrity.

It wasn’t that long ago when Magoebaskloof’s culinary offerings were limited to things like hamburgers and chips, pizza and, for the “very hungry”, steaks the size of knee blankets. Vegetarians were offered chicken salads. Requests for café latte were met with wide eyes, latte also being the Afrikaans word for slender gum poles. Few people imagined that one day it would be okay to have a cucumber in your gin.

These days on the mountain however – as locals dub the Magoebaskloof area – you can do Mediterranean Swedish fusion table d’hôte tastings with astonishing valley views, drink the best craft beer at a brewery on a gorgeous farm, go gin tasting at a sexy distillery overlooking soft mountains and banana lands. You can do the whole village deli, sourdough vibe, nibble on microgreens, you can even go Persian.

It takes a village to raise a beer

It’s a fairly wild ride to Mina’s and Zwakala, about 6km from Haenertsburg village along the infamous Cheerio Road (leads to beauty and pleasure) which is bouncy and rutted – serious sports bra territory – and just about everyone has a story about getting there, getting stuck, getting out, getting down.

The real big change came when their son Luca started Zwakala, Limpopo’s first brewery, next to Mina’s, in 2014. The name Zwakala means “come closer” and the brewery attracted a younger, hipper, non racial crowd from the village as well as surrounding Polokwane and Tzaneen. Lovely young Limpopian beer lovers who could not only tolerate man-bun-wearers, bikers, kugels, hippies and families all in one crowd, but were prepared to negotiate a helluva country road to do it.

“A key ingredient in our beer is the sweet and pure mountain water we brew with,” says Luca, who is head brewer. “It really comes out in the flavour. And yes,” he chuckles, “it is an adventure getting here”.

In 2019 they walked off with the Best Light Lager award in South Africa for their Limpopo Lager and on Friday 26 November they won Best Beer of the Year at the South African National Beer Trophy Awards for their Weekend Special. They also do a Naked Ale, a Mountain Weiss and interesting collaborations like their Upside Down Baobab and Ginger Weiss and the Pantsula Hop, a light, hoppy, summery ale.

“We started Pause because we wanted to do something totally and utterly different,” says Anders Ragnarsson, chef, chief, cook and bottle washer of [email protected], which he owns and manages with his partner Douglas Walker.

Well, how about an Oceania Cheese Mousse Tart inspired by a northern Swedish traditional tart, featuring seafood poached in Thai leaves and coconut cream, pickled onions, caviar and a dill and Dijon aïoli? How about a pork fillet escabeche served with mushroom arancini and a creamy harissa sauce dusted with Moroccan dukkah?

From their very first monthly pop-up, [email protected], their menu was indeed so totally and utterly different that no self-respecting foodie in town could resist.

An elegant glass-walled restaurant with beautiful artworks and a massive fireplace, Pause is the culinary heart of Graceland Eco Retreat, a remote and gorgeous off-the-grid spot overlooking the expanse of the Kudu River Valley. Their small herd of giraffe (Elvis, Priscilla, Memphis, Tennessee, Lisa Marie and Nashville) hangs out around the edges of the restaurant, lending the place a deliciously East African air, never mind providing endless Instagram moments.

“We feature a fusion of flavours, aromas and impressions with strong influences from Scandinavia, Asia and the Mediterranean,” says Anders, who is originally Swedish, grew up in a foodie home, has a doctorate in medical science, and has travelled to more than 50 countries, tasting his way around the world.

“Prior to the pandemic, we attracted many foreign guests – the good news is they’re coming back – and we wanted to give them something international and yet completely African.”

Local, seasonal, organic, sustainable, that’s the ethos of [email protected] “Our aim is to eventually grow all our own herbs and vegetables,” says Douglas, the gardener in the house, “and since Graceland is an off-the-grid eco retreat, we also recycle, compost and avoid unnecessary packaging.”

The Spirit of Limpopo

The gin revolution started in the south, at the bottom of the mountain, and even though it’s not strictly Magoebaskloof, who cares once you’ve fallen in Gin Love?

Like most independent gin distilleries, The Old Packhouse Distillery is run by rogues, rebels, artists, farmers, poets and vroue van staal, and yes of course they’re my friends and their gin is out of this world.

There’s delicious alchemy at The Old Packhouse, which is literally an old farm packhouse that’s been beautifully renovated into a distillery with tasting rooms, tables and an art gallery.

“Our Blueberry Gin is our flagship”, says founder Mark Dando. “We use 100g of locally produced blueberries in each bottle and it’s four times distilled for smoothness and purity”. My favourite however, is their Moringa, distilled with the “miracle tree”, famed for its immune boosting qualities, and my second best, the Pink Moringa. Then, the Crystal which is a classic London dry followed by the Dragon Fruit which is an unbearably sexy colour, never mind springy and zingy.

Did I mention they also do Mandarin and Valencia? And that they’ve started doing rum, brandy and tequila under The Spirit of Limpopo label. Google for yourself how many awards they’ve won.

A taste of Magoebaskloof

Pendulous and plump avocados, juicy blueberries, tangy kiwi fruit, free range meat, chicken and eggs, homemade biscuits, organic goat’s cheese… one of the loveliest places on the mountain to get delicious local artisanal produce is at Stella’s Farm Deli which is on the outskirts of Haenertsburg village. They also sell freshly baked goodies, cappuccino and wine; yes, they have wine!

Stella’s Farm Deli is run by the delightful Hester Human. She and her husband Emmanual spent years overseas before returning to open Stylkop Butchery on their farm in nearby George’s Valley. “We started out delivering meat to private clients and mountain establishments,” says Hester, “but as the business grew we realised we needed to expand into retail.”

One of the more interesting products at Stella’s Farm Deli is Bao Mayo, a vegan mayonnaise made from baobab powder. It’s made by Cicadas Local, who also grows microgreens and edible flowers. You’ll see them arranged on dishes all over the mountain.

“The high demand for these amazing little greens resulted in us designing and building a greenhouse/shed specifically for growing micro greens throughout the year”, says Cicadas Local founder Teri Willson. “The only real challenge in growing edible flowers is finding ways to minimise sharing them with our bushbuck and duiker.”

Cicadas Local is also evolving into a small distribution company which sends some of Limpopo best produce to outlets in Jozi, Hoedspruit and Tzaneen. Check out their Instagram page.

Down on the farm

For an inspiring new take on the old cheese and wine concept, head for Wegraakbosch Organic Farm. The original slow foodies on the mountain, Nipper and Sylvi Thompson started making cheese here in 1986 after they learnt the art of organic cheesemaking in the Swiss Wandel Alps. They do traditional Mutschli, Tilsiter, Emmental, Havarti, feta and cream cheese. Blessed are the cheesemakers as it was said in the Monty Python movie classic Life of Brian.

The farm is now run by their daughter Michi and her husband Ray. A tour of the dairy is really inspiring – from cow to curd to cheese there are absolutely no chemicals, fertilisers, pesticides or machines involved – and you can round it off with a ploughman’s platter, a glass of wine and signature mountain views.

Sensual Persian delights await further down the mountain at Kuhestan Organic Farm, where Brett and Shahrzad Hone grow seasonal avocados, raspberries, quinces, plums, rhubarb, figs, blueberries, Persian limes, piquant peppers and various herbs, all of which are used in their incredible range of bottled products – all chemical and preservative free. Their cordials are utterly delicious. Lemongrass and Ginger, Kiwi and Mint, Pomegranate… great with a shot of vodka. They also do strawberry, blueberry and golden kiwi jam, Naranj and Persian Lime Marmalade as well as eggplant pickle. The farm has gorgeous gardens and self-catering accommodation. If you round up a group of eight or more, Shahrzad will do you a Persian feast.

There are obviously still places in and around Magoebaskloof that remain in the old pizza-burger-steak paradigm, but with so many exciting local initiatives taking place, the palate of the area looks set to become increasingly diverse and delicious. DM/TGIFood