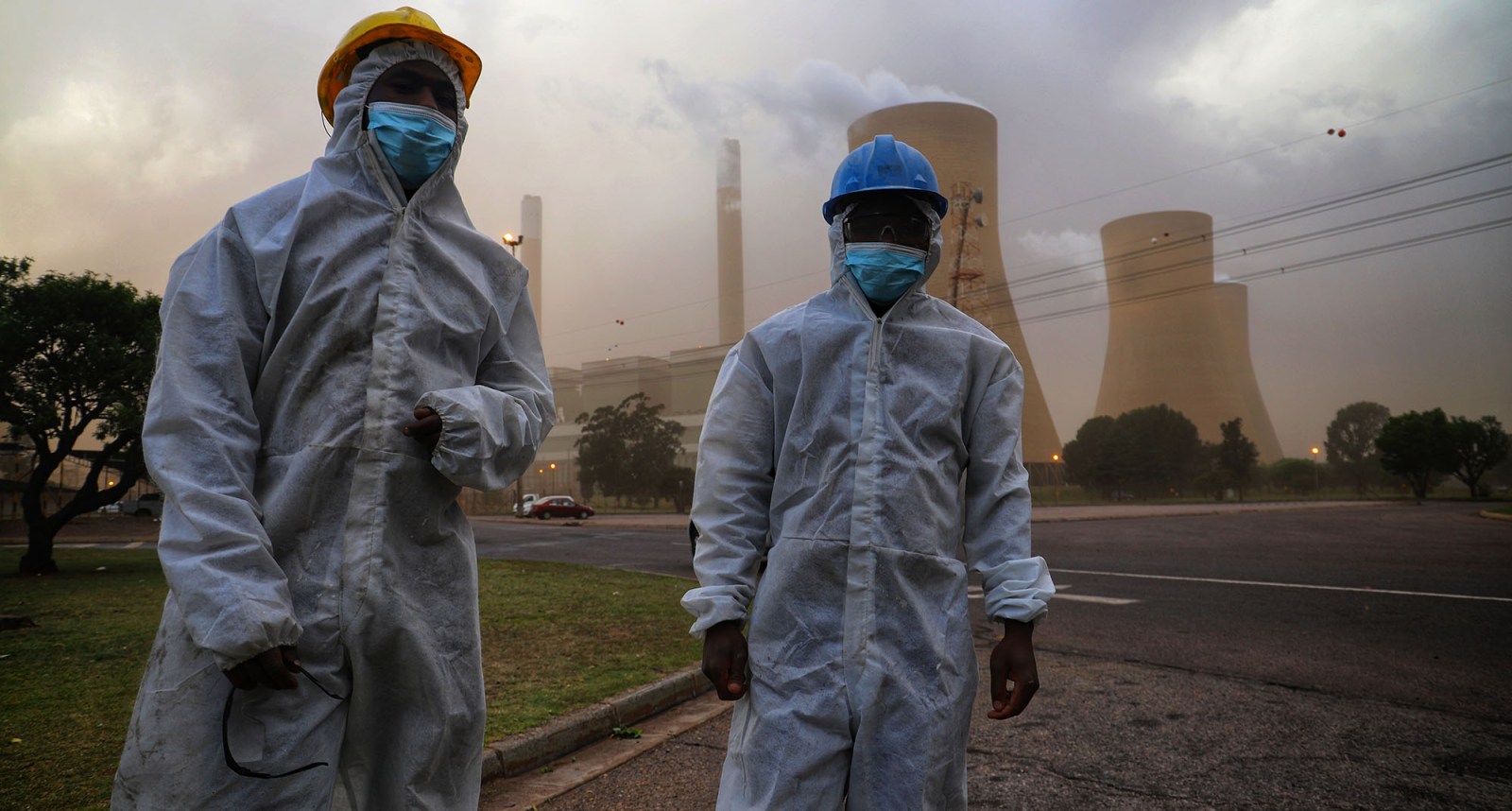 Two Duvha Power Station workers tell Daily Maverick that any move to rapidly shut down coal-fired power plants would be disastrous for them and their families (Photo: Ethan van Diemen)

Threatened by both the increasingly likely prospect of a dangerous climate crisis and energy transition-induced poverty and unemployment, these are some of the people who face the biggest risks as humanity pivots towards a post-fossil fuel epoch. How can their participation in the transition be improved?

While Team SA was negotiating what was described as a “watershed” R131-billion multilateral climate financing deal in the air conditioned halls of the conference centre at the COP26, some of those most affected by the transition were on Mpumalanga’s soot-covered ground, seemingly unaware that their livelihoods were being negotiated without their consent or input.

The Presidential Climate Commission Technical Report on the Just Transition explains that a “just transition” refers to “the management of a transition to a low-carbon society in a balanced and just manner, housed within a given socioeconomic context”.

An analysis by the World Resources Institute (WRI) found that though South Africa has a strong foundation for a just transition, “social dialogue has mostly remained at the national level”. It goes on to say that “this may create downstream challenges because concerns at the national level will differ from those at the local level”.

This, and more, was borne out by the anecdotal encounters Daily Maverick had with various people in Mpumalanga who were relatively less informed about the science of the climate crisis, coal’s role therein and the planned energy transition.

Wandile Dlamini is a contract worker at the troublesome Duvha Power Station. He is among those first in line to lose their jobs as Eskom and South Africa accelerate their decarbonisation agendas to move beyond coal.

Bongikosi Gina, an employee at Masekane Liquor Store, earns his living upstream of the coal value chain. But a few kilometres away from Eskom’s Duvha Power Station, he is already feeling the impact of a reduced workforce. There are fewer contractors working at the power station, he said, and they and other locals constitute the lion’s share of the liquor store’s customers.

Gina added that, if Eskom should shut the Duvha coal-fired power station or if the coal mines around the Masakhane area cease operations, his liquor store business would struggle and the people who depend on him would suffer the consequences.

In a recent webinar hosted by Trade and Industrial Policy Strategies (Tips), senior economist Gaylor Montmasson-Clair explained why participatory justice was at the core of the just transition process.

Montmasson-Clair stressed that it starts with workers and people on the shop floor who are at the core of this just transition.

David Fankomo, a full-time National Union of Mineworkers (NUM) shop steward at Komati Power Station and former employee at the power station in eMalahleni, spoke about his concerns.

“We have a concern with the just transition. It’s a just transition which is not just because as workers the level we are communicated with, it’s not proper, it’s not enough. Even the workers, even the community around Komati, they are worried. They only got rumours that in 2022 Komati will be closed. So it means, it needs to be a matter of improving in the communication side of it to say people must know what will happen there. Then the ‘just transition’ will be just.

“Is there any surety that our jobs will be safe? If so, how? You see, there must be a plan but we don’t have such. That is our worry,” said Fankomo.

He explained that many of the workers that he represents feel as if the government is kowtowing to the international community at their expense.

“Why don’t they tell the world ‘let’s consult, consult’, ‘let’s make sure our people are happy’ because our understanding and our reasoning – it can be shallow but it concerns us – but myself as a shop steward I am dealing with people on the ground who will be asking me a simple question: what will happen with my job, is my job safe?”

A few hours away, on a hot late November day, a 29-year-old coal miner – who asked not to be identified – stood outside a liquor store in the tiny coal mine-adjacent town of Ogies, Mpumalanga. He told Daily Maverick that “if the [coal] mines close, we will vanish. You won’t see anything. The businesses you see here are supported by people, those people who are working for the mines. It’s going to kill the business, everything.”

TIPS explain in their coal value chain report that “the value chain as a whole employed around 200,000 formal workers and was the main source of livelihoods in eMalahleni [Witbank], Steve Tshwete [Middelburg], Govan Mbeki [Secunda] and Msukaligwa [Ermelo]”.

Daily Maverick asked the 29-year-old miner what the impact of closing mines would have on the area. He said “it’s going to be bad. Because I think 80% of the people around this area are mining-based so if they take it away…ja, eish. My family will suffer. It’s not only my family, people depend on me because now I’m providing for maybe three or two families.”

To foster the creation of a social compact and to reduce the communication gulf between those affected by the transition and those charged with charting its course, Valli Moosa, the Presidential Climate Commission (PCC) deputy chairperson at the 26th annual National Economic Development and Labour Council (Nedlac) summit announced plans for wider consultations with the people most affected by South Africa’s transition.

“The PCC plans to meet directly with those affected like coal miners who have already lost jobs, workers in coal-fired power stations who plan to lose jobs through decommissioning as well as those who live in the surrounding communities and are dependent on that mining activity to support their livelihoods,” said Moosa.

Michael Nkosi, from the Local Economic Development Department at the Steve Tshwete Local Municipality, in the Tips webinar, expressed reservations as to whether the structures and platforms in place involve the most affected people. Nkosi questioned how these platforms are used and for what purpose. Offering a critique of how government and business use these structures as a mere mechanism to “tick the boxes”, he explained that whilst “we might have the right platforms and legislation for participation purposes”, it is questionable whether these structures are used correctly and for the right purposes.

“We are using them for compliance purposes”, but “are we using the structures to draw inputs from the communities that will influence how we structure the end products, I have my doubts,” he said.

Nkosi concluded, noting that “we have some way to go” in terms of how effectively we are using the mechanisms in place to engage; how to address the fragmentation of information and processes and the lack of coordination within government and ensuring affected communities and businesses have a role to play.

Hameda Deedat, executive director of National Labour and Economic Development Institute, in the same webinar, stressed the need to address the power dynamics as power plays an important role in terms of how people engage.

In relation to labour’s role in this process, the institute – which is often described as Cosatu’s research arm – and others are trying to ensure workers have the knowledge and “we are trying to facilitate a process where workers feel confident to articulate their concerns”.

Workers, she stressed, are the people who do not have access to clean air, water and the like – “there are no better people to tell what is happening and what the Just Transition means for them”.

The Presidential Climate Commission Technical Report on the Just Transition explains that “South Africa’s transition to net zero CO2 emissions will take place over the next three decades in line with its Integrated Resource Plan and the Nationally Determined Contributions, among others. These form part of the government’s commitment both to its citizens and as part of a global movement towards changing the source of energy generation for the country and reducing the impact of climate change on the planet.

“The timeframe to ensure that this transition is ‘just’, however, requires immediate decisions to ensure the mechanisms are in place in the near term to support the transition,” it reads.  OBP/DM