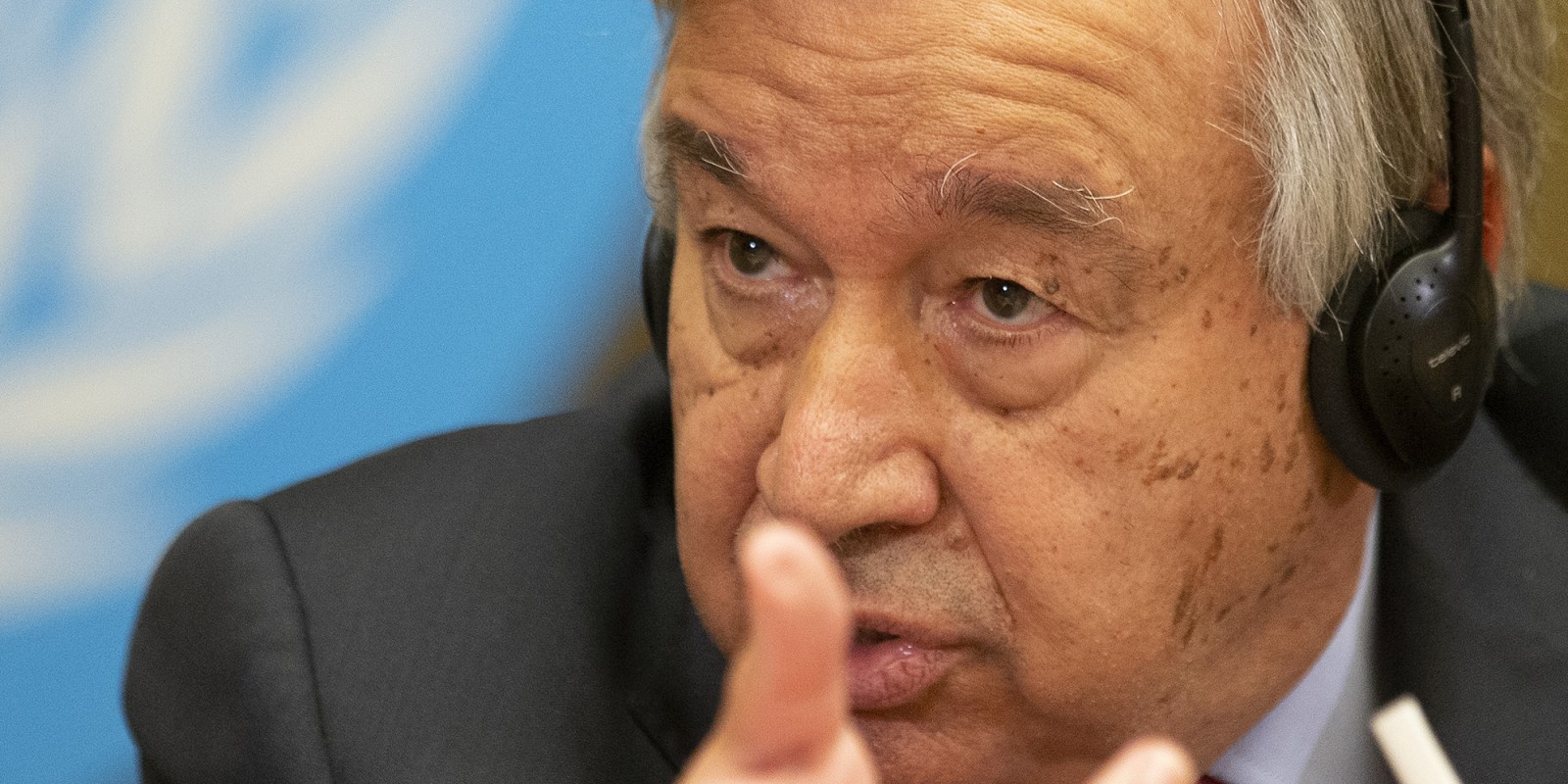 UN Secretary-General, António Guterres, in an address to the World Leaders Summit at COP26 in Glasgow on Monday, said that “the six years since the Paris Climate Agreement have been the six hottest years on record. Our addiction to fossil fuels is pushing humanity to the brink. We face a stark choice: Either we stop it — or it stops us”.

“It’s time to say: enough. Enough of brutalising biodiversity. Enough of killing ourselves with carbon. Enough of treating nature like a toilet. Enough of burning and drilling and mining our way deeper.

“We are digging our own graves,” he warned.

“Our planet is changing before our eyes — from the ocean depths to mountain tops; from melting glaciers to relentless extreme weather events. Sea-level rise is double the rate it was 30 years ago. Oceans are hotter than ever — and getting warmer, faster. Parts of the Amazon rainforest now emit more carbon than they absorb. Recent climate action announcements might give the impression that we are on track to turn things around.

“This is an illusion,” said Guterres.

The last published report on Nationally Determined Contributions showed that the plans would still condemn the world to a calamitous 2.7ºC increase, he said. “And even if the recent pledges were clear and credible — and there are serious questions about some of them — we are still careening towards climate catastrophe.

“Even in the best-case scenario, temperatures will rise well above 2ºC. So, as we open this much-anticipated climate conference, we are still heading for climate disaster.”

All countries need to realize that the old, carbon-burning model of development is a death sentence for their economies and our planet.

We need decarbonization now, across every sector in every country.

Daily Maverick previously reported that a recent United Nations’ Environmental Programme (Unep) report showed that updated Nationally Determined Contributions (NDCs) reduced projected emissions by a mere 7.5% as compared with previous NDC goals. The world needs a 30% decrease to limit global warming to 2°C and a 55% decrease to limit it to 1.5°C, the report stated.

The Unep report shows that to meet the 1.5°C global warming target, greenhouse gas emissions would need to be halved in the next eight years by removing an additional 28 gigatonnes of CO2 equivalent (GtCO2e) from annual emissions.

This, however, is a big challenge as evidenced by another recent report.

Its findings included that the rapid but uneven economic recovery from last year’s Covid-induced recession is putting a major strain on parts of today’s energy system, sparking sharp price rises in natural gas, coal and electricity markets. “For all the advances being made by renewables and electric mobility, 2021 is seeing a large rebound in coal and oil use. Largely for this reason, it is also seeing the second-largest annual increase in CO2 emissions in history.”

In an interview on the World Economic Forum’s Radio Davos Podcast, Dr Fatih Birol, executive director of the IEA, noted this discrepancy, saying that “2021 is a very peculiar year because we see two opposing trends. On one hand, we see that the momentum to address climate change has never been greater in the world. Many governments around the world — the US, Canada, all EU countries, UK, Japan, China — came up with strong commitments to reduce their emissions. So did many companies around the world. And when you look at the public, there is a great, great support — [from] governments, industry — to address this issue. This is one trend.”

In the other trend, Birol explains, “we are seeing a huge increase in global emissions — the second-largest increase in history ever. So there is a bit of a gap between the rhetoric and what is happening in real life. This is a worrying trend. And as such, the longer we [take to] bend the emissions trend downwards, the less chance we will have to address our climate challenges and bring the temperature trajectory to a level that can provide us a liveable planet”.

We just released a major update to our Sustainable Recovery Tracker

In an Our Burning Planet op-ed, leading South African climatologist Professor Francois Engelbrecht and Dr Pedro Monteiro, chief oceanographer at the Council for Scientific and Industrial Research, explained that 1.5°C and 2°C are the thresholds at which point humanity can expect to experience “dangerous climate change”. For South Africa, this means more frequent, multi-year droughts, prolonged and more severe heat waves, the collapse of livestock and staple food agriculture, and even the possibility of hurricanes making landfall in the country, among other risks.

In his address on Monday, Guterres said the world faced a moment of truth.

“We are fast approaching tipping points that will trigger escalating feedback loops of global heating. But investing in the net-zero, climate-resilient economy will create feedback loops of its own — virtuous circles of sustainable growth, jobs and opportunity.

“The science is clear. We know what to do. First, we must keep the goal of 1.5ºC alive. This requires greater ambition on mitigation and immediate concrete action to reduce global emissions by 45% by 2030. G20 countries have a particular responsibility as they represent around 80% of emissions.”

He explained that “according to the principle of common but differentiated responsibilities in light of national circumstances, developed countries must lead the effort. But emerging economies, too, must go the extra mile, as their contribution is essential for the effective reduction of emissions.”

“I urge developed countries and emerging economies to build coalitions able to create the financial and technological conditions to accelerate the decarbonisation of the economy and the phase-out of coal.

“The sirens are sounding,” Guterres said to the assembled world leaders.

“Our planet is telling us something. And so are people everywhere. Climate action tops the list of people’s concerns, across countries, age and gender. We must listen — we must act — and we must choose wisely.

“On behalf of this and future generations, I urge you: Choose ambition. Choose solidarity. Choose to safeguard our future and save humanity.” OBP/DM