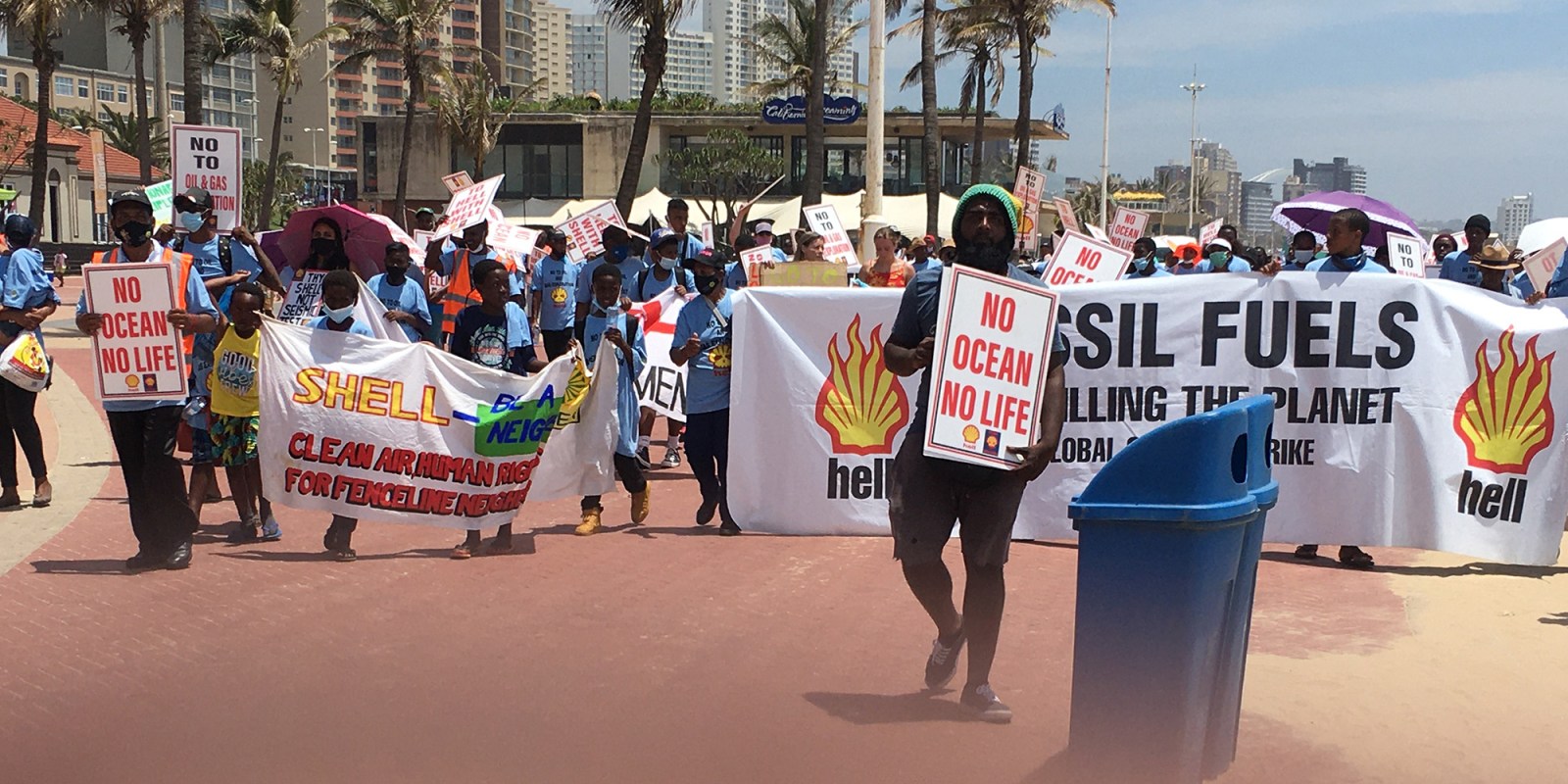 On Saturday, 11 December hundreds of activists and residents from around Durban converged at the Suncoast Casino beach entrance and marched all the way to South Beach, joining those from other provinces in protest at Shell’s proposed plan for oil exploration off the Wild Coast.

Organisations, including the South Durban Community Environmental Alliance (SDCEA), people from areas including KwaMakhutha and fishermen coming from various parts of Durban including uMkhomazi, Verulam and other areas, braved the scorching sun to make their voices heard.

The protest comes after the Makhanda High Court refused to award an interdict applied for by the Kei Mouth Ski Boat Club, the Border Deep Sea Angling Association, Greenpeace Africa and Natural Justice, that would have stopped the survey.

Speaking at the march on Saturday, coordinator for the SDCEA Desmond D’sa said the aim of the protest was to let the oil company know that it would not be allowed to drill off the coastline.

He said they were confident that the boycott was gaining strength all over the country and the continent.

D’sa further said that this would be a fight where Shell and Minister of Minerals and Energy Gwede Mantashe were “going to find it difficult to extinguish the fire”.

He said the Wild Coast was one of the most pristine areas of South Africa which attracted people from all over the world. He said the people who reside in and around the area had lived there all their lives and some relied on fishing and tourism to feed their families.

“Shell would never be free because they will fight them till they are dead and their children’s children would take over the fight,” he threatened.

For fisherman Azaad Hoosen Sayed, the fight was more personal as he and his family relied on fishing for their livelihood. Sayed said his brother lost his job due to Covid-19 — he was now supporting his brother and his wife and newborn baby. He said no one was there to help them; the government was doing nothing to assist them. Now 25 years old and a member of the KZN Subsistence Fishermen Forum since he was 13, he said they were not willing to give up the fight against Shell.

He called on everyone in the country to stand with them in the fight against companies like Shell, which threatened to steal the ocean and rob them of making a living.

He said countries like Nigeria were damaged because they allowed their ocean to be infiltrated and stolen from them.

Desiree Laverne, a volunteer at Greenpeace Africa, said the group was “extremely angry because not only does this have a destructive impact, it’s also going to impact the community whose livelihoods depend on the ocean”.

Laverne said the government and Shell needed to understand that the ocean belonged to the people and the people did not want it to be exploited.

She said that the blasting would affect the aquatic species that lived in the sea. She worried whether the sardine run would ever occur again if this was allowed. Laverne said a lot of the tourism industries that employed rural communities would also have to close, forcing people out of work.

She asked if the lives of rural communities did not matter and whether profit took precedence over them.

On Sunday, Shell took out a full-page advert in the Sunday Times in an attempt to clarify why they had their eyes on the Wild Coast and the measures they would put in place to ensure that risk to marine life was minimised.

In the statement, chairman of Shell Companies in South Africa, Hloniphizwe Mtolo, said the country remained dependent on coal, oil and gas for energy needs, adding that as the country transitioned to a lower and eventually a net-zero carbon emissions future, there would be a need to continue to provide the energy the country needed today.

“Finding resources offshore could significantly contribute to our energy independence, as well as the government’s economic development programmes, whilst providing many local job opportunities. If South Africa can find its own supplies of offshore gas, this could play a key part in changing our country’s energy mix; presently [we are] heavily reliant on coal for energy generation,” said Mtolo.

He said it wouldn’t be the first time a seismic survey had been done in South Africa — there had been at least 35 without any reported significant negative impact on marine life.

Mtolo assured readers that Shell was a committed and responsible company and that “caring for our local environment and wildlife is a key part of our business in everything we do”.

He said the survey would be conducted outside the sensitive environmental window period for migrating whales in South Africa. It would also take place 20-70km from the shore to ensure that there would be no impact on small-scale fishing.

The company says it has appointed an independent team to join them on board the ship conducting the survey, and they will monitor for the presence of marine mammals before and during the seismic activity, which will be paused when sightings are made. DM/OBP