After an acrimonious, pressure-cooker election, Covid-1... 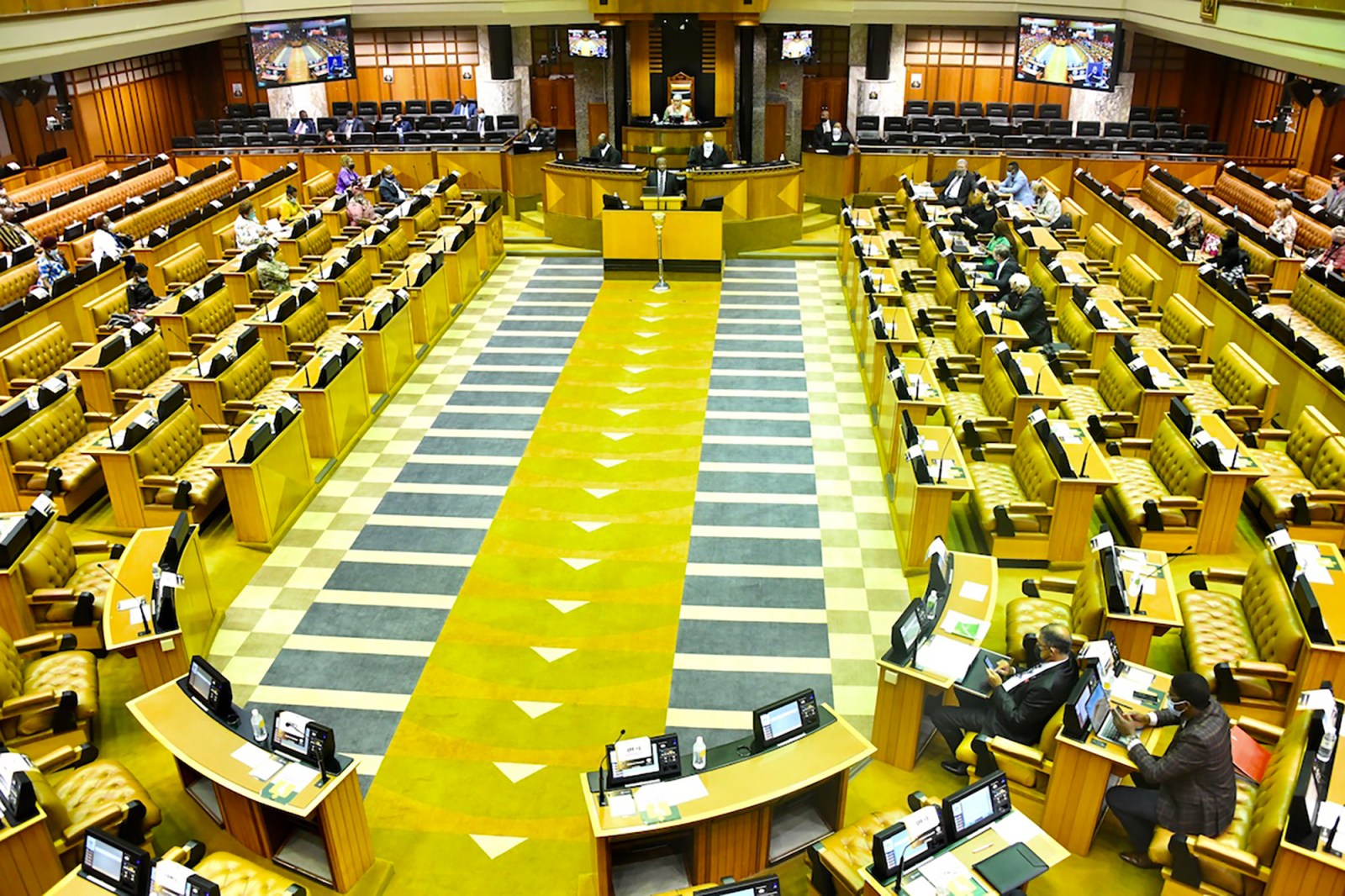 Like much of 2021, Friday’s last sitting of the House was mostly about political point scoring – playing to the cameras given that online parliamentary meetings dominated Covid-19 Lockdown Year Two, Day 624.

Aside from the traditional farewell speeches, Friday business in the House was the adoption of the Medium-Term Budget Policy Statement (MTBPS)-related Adjustments Appropriation Bill.

Without that Money Bill getting parliamentary approval, none of the additional allocations to departments, provinces and public entities can be paid. That would be a governance crisis. It wasn’t, the Bill passed regardless of acerbic politicking.

As opposition parties took predictable pokes at the ANC about corruption, governance inefficiency and ineffectiveness – the DA added digs at “millionaire managers” to its cadre deployment repertoire – the debate made clear the ANC playbook.

Such zero-sum politicking from both sides of the House has marked much of 2021 – as recently as two days earlier when the constitutional amendment to expressly allow expropriation without compensation failed to achieve the required two-thirds support amid political slander of “sell-outs” and “counter-revolutionaries”. Or during September’s presidential Q&A when pre-municipal poll politicking was on the boil.

Point-scoring politicking is done in the full knowledge that these days House sittings, like committee meetings, are captured on Parliament’s YouTube channel for posterity.

After years spent umming and ahhing about video conferencing to cut the cost of Pretoria-based officials flying to Parliament’s seat, Cape Town, the Covid-19 lockdown and related changes to work environment has quick- marched Parliament to online Zoom, Teams and such.

But as these online meetings are recorded and uploaded on Parliament’s YouTube channel, MPs have taken to speechmaking rather than asking insightful questions in pursuit of oversight and accountability. On occasion MPs at the podium not only greet fellow parliamentarians, but all South Africans watching.

It’s MPs as actors on a stage called Zoom.

The other side of such performative oversight is how much falls away from public scrutiny.

The nomination of a new inspector-general of intelligence (IGI) for the first time is conducted behind closed parliamentary doors. After two candidates withdrew for unstated reasons, a list of 10 shortlisted candidates were published with a request for public comment by 5 January, according to a statement by the Joint Standing Committee on Intelligence (JSCI) on 6 December.

But soliciting and considering public comment are not the same as public access and Parliament conducting its business in an open manner, as Section 59 of the Constitution sets out. And while the JSCI in a practice that’s evolved sits behind closed doors, exceptions have always been made for the process of nominating the IGI, given that office’s crucial constitutional oversight role.

Erring on the side of if not quite secrecy, then silence seems part of a trend that emerged in June 2021 when during the selection of nominees to the Critical Infrastructure Council responsible for so-called National Key Point the parliamentary police committee gathered away from the mics for discussions.

And as recently as the eve of the National Assembly’s rising, Defence Minister Thandi Modise suggested to the Joint Standing Committee on Defence it should consider requesting a closed meeting so some matters could be discussed more freely. Reasons for a closed meeting include protecting commercial interests/sensitivities or that a person’s life may be endangered, she suggested.

In November 2021 the National Assembly programming committee decided nothing that was pending before judiciary could be discussed – despite this not quite being the case in the rules, and courts long ago having demolished sub judice.

But this silence on matters before courts does allow the ANC parliamentary caucus to sidestep a few political pickles in a year that will see factional fissures spotlighted ahead of the ANC policy and national elective conferences.

Friday was a long day, in a long year that saw much parliamentary business stack up not least because MPs sat just 25 weeks, or just short of six months, in 2021.

Much of this time pressure related to the local government elections, including the 11-week mid-year so-called constituency recess, which was followed by a further seven-week recess from 10 September, according to the parliamentary programme, after the municipal poll was set down for 1 November.

The final six weeks of 2021 were a hard slog – from the Budget review and recommendation reports (BRRR), a key oversight tool involving annual reports, financials and departmental performance and strategic plans, to at least starting on draft legislation like the Electoral Amendment Bill that proposes minimalist changes so independent candidates can contest national and provincial elections.

On the parliamentary ethics front it may have taken 28 months, but the report on the EFF MPs who in July 2019 disrupted Public Enterprises Minister Pravin Gordhan’s Budget debate speech has now been adopted. Sanctions range from the suspension without pay of two of the 16 EFF MPs, and the others being fined a month’s salary.

But in November acting Secretary to Parliament Baby Tyawa, who has been acting for four-and-a half-years, was elected onto the nine-strong executive committee of the Association of Secretaries-General of Parliaments that met on the sidelines of the Inter-Parliamentary Union (IPU) Assembly in Madrid, Spain.

Other acting positions include that of Serjeant-at-Arms following the retirement of Regina Mohlomi, the first woman to hold this position, and the posts of chief financial officer and chief information officer that have been without permanently appointed incumbents since late 2018.

The Parliamentary Protection Service (PPS) is not only led by an acting incumbent since at least October 2017, but also seems to have been downscaled to security management in the household division in an institutional restructuring, if an August 2019 job advert was anything to go by.

Parliament told Daily Maverick the recruitment process for these positions is ongoing, and with the interviews for a new Secretary to Parliament concluded “a decision will be made in due course”.

Just making it onto the 2021 parliamentary calendar was the South African Parliamentary Institute, launched to empower lawmakers through skills training, but also with research, advice and technical assistance on policy and legislation.

With vaccination mandates increasingly discussed, and implemented in the private sector, Parliament hasn’t quite gone down that road yet, emphasising safety, and adherence to government issued health guidelines and protocols.

So whether lawmakers return in person to Parliament, rather than online committee meetings and hybrid sittings of the House remains to be seen in 2022.

But on Friday the curtain fell on the 2021 parliamentary calendar. And with the final words, “The House is adjourned”, it was a wrap for 2021. DM