I Am Samuel: An African love story against all odds, yet with further obstacles and divisions to navigate 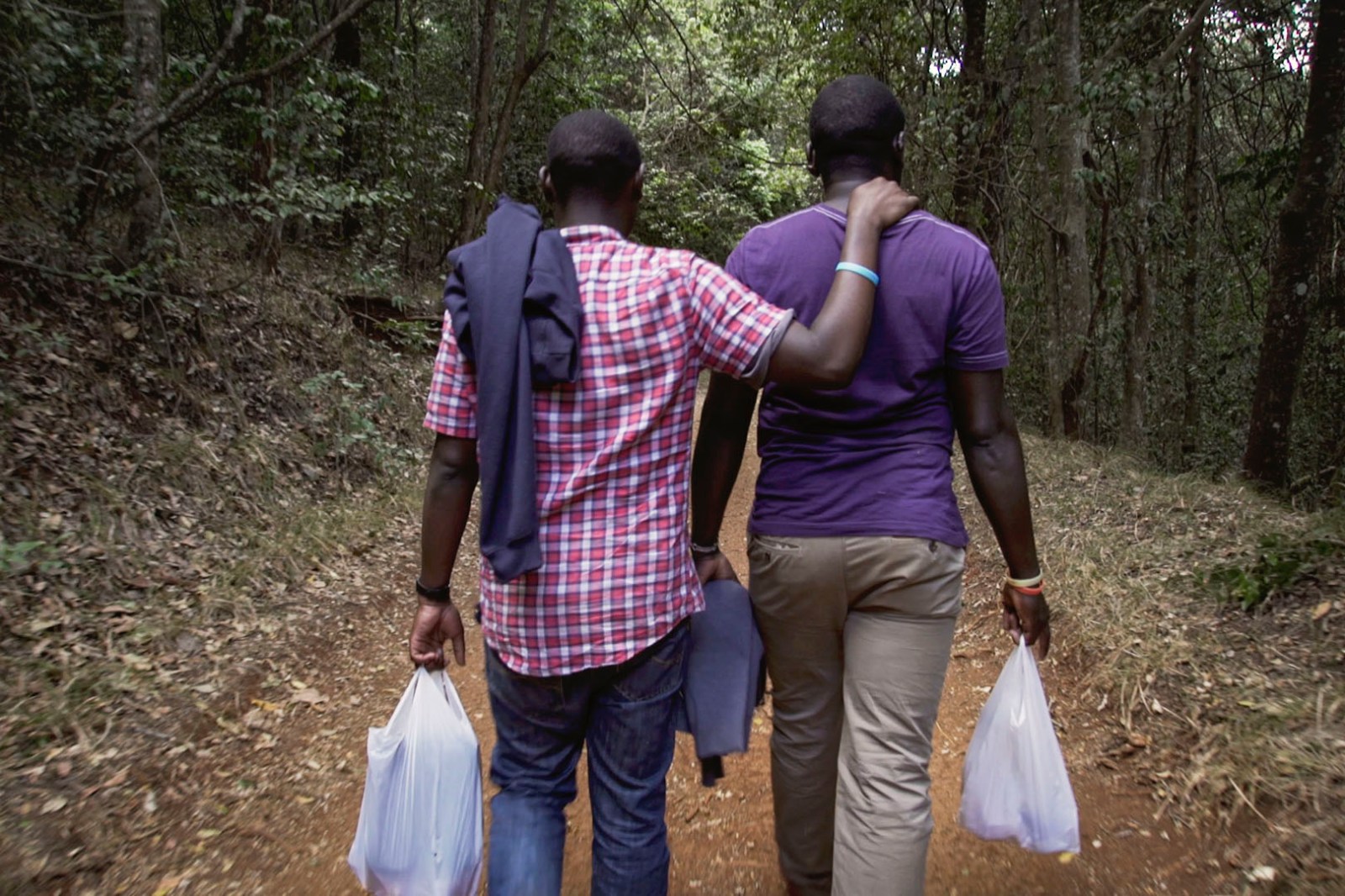 A still from the documentary I Am Samuel showing Sam and Alex taking a walk in the forest. (Photo: Supplied by We Are Not the Machine Ltd)

Although banned in Kenya — its country of origin — queer documentary ‘I Am Samuel’ aims to present new perspectives and understanding. Its makers hope the documentary will serve as a catalyst for dialogue across the country.

The film I Am Samuel, hailed by some in the international media as a “meditative, optimistic documentary on queer love in Kenya” and “a work of true bravery”, was banned by the Kenya Film Classification Board shortly after its release. In a statement, the board labelled the film “an affront to our culture and identity” that violates “Article 45 of the Kenyan Constitution, which recognises the family as the basic unit of society and defines marriage as between two persons of the opposite gender”.

Directed by multi-award-winning documentary filmmaker Peter Murimi, the verité-style documentary tenderly tells the story of Samuel, a soft-spoken, young gay Kenyan torn between his dreams of building a future with Alex, the man he loves, and the conservative views of his family and country.

In an edited interview, Murimi and the film’s impact producer, Annette Atieno, speak about putting together I Am Samuel in such a largely conservative environment, possible strategies to try to halt the Kenyan government’s continued banning of queer films, and why this queer love story is a quintessentially African story that took five years to film and another two to edit.

Carl Collison: Seven years? Was it difficult? Given the subject matter and where you were filming, it couldn’t have been easy?

Peter Murimi: It was a very, very, very small team. Most of the time it was just me. And with a very small camera, so even in the communities where we were filming, I looked like just an amateur filmmaker. Because the profile — or rather the footprint — of the crew was really small, that really helped.

But the reason it took five years [of strictly filming] is because of how we were approaching the film. It was supposed to be, like, really intimate, and that requires building a lot of trust with the people that you’re filming. The only way to build trust is [to give it] time; there’s no shortcut to that. And especially because of the subject matter and the repercussions that could come with it…

Collison: So, a lot of work creating trust, shooting, revisiting sites, interviewing, editing, and then the film gets banned in Kenya. How did that make you feel?

Murimi: It was disappointing, especially [because] I think this film… Kenyans would connect with it. Because it’s from Kenya and by Kenyans and it’s in Swahili [with English subtitles]. But… this is also a film for Africa. And yes … but the rest of Africa is enjoying it now and can watch it now. So we’ll take that. That’s a win.

Collison: What is the response to the film, especially across Africa?

Annette Atieno: We’re getting really positive responses, especially from the [queer] community. So people want to see the film. One of the comments that I remember and that I hold dear to my heart is “I’m glad to see a film about a black, gay man shot through the lens of another black man.”

There have been really strong responses as well from the Kenyan [queer] community, because this is their story…

Collison: The film was not shown at the recent Out Film Festival in Nairobi. How do you feel, particularly as a queer person, that it is not available to Kenya’s queer communities?

Atieno: I love the Out Film Festival. I have attended every single year since I discovered it. It’s very unfortunate that, by and large, they’ve been unable to screen Kenyan films because of these bans. There [were two other queer films,] Stories of Our Lives and Rafiki and, now, I Am Samuel [that have been banned]. And so it is sad that we cannot watch Kenyan films.

Collison: Were there times when people asked why you, a straight man, are doing a film on gay men in Kenya?

Murimi: Not directly… I was asking myself, “Am I the right person to tell the story?” I had the commitment and I think my motivation was right, but … with each film, it’s as important who the person is telling it as the story itself. During this process, there was a lot of self-examination… Eventually, my relationship with the family and with Samuel, I think, brought a lot into the narrative.

Collison: What was the impact of the film on Samuel and his family?

Murimi: This was consistent throughout the making of this film: security. And especially in Kenya, because class buys you some protection. If you are queer and you [have] a little wealth, it’s a different story than Samuel [for whom] that safety net doesn’t really exist… Samuel was living in Kariobangi [in Nairobi], and in these places [with] high-density populations everyone is very close to each other. So his security isn’t that guaranteed… It became really clear that [for] Samuel it was not safe or practical to be in Kenya when the film was released. So that’s a sacrifice he had to make: being away from his family. His family has [also had] to make that sacrifice of their son being far away. It was a necessary sacrifice, but they were happy to do it. I think it was worth it and they think it was worth it…

Collison: Is there any way that you can negotiate with the government or the Film Classification Board, or to mobilise support for the screening of I Am Samuel there?

Murimi: There’s a short-term view, but there is also … the long-term game plan.

I don’t think it will change the circumstances, but we’re going to try to reason with the government, write a letter to the ministry and have a dialogue. This is the third queer film that is being restricted in Kenya and that Kenyans are being denied the chance to watch. So I think there has to be a bigger, long-term game [that will result in] hopefully this being the last film that has to go through this. Part of releasing the film across Africa [is that] I think later down the line the government will see that there are so many other countries [with which] we share the same cultural values, [which] are very similar — Uganda, Tanzania, South Sudan, Ethiopia — and in all these countries you can watch I Am Samuel; it’s not banned. [We want to] go back to them a few months down the line and just say Africa has been watching this film. They’ve been debating. They’ve been talking about it. And look, the sky didn’t collapse. Nothing bad has happened. It’s just very healthy dialogue that has been going on. And, hopefully, they will say, “Yes, maybe we are overreacting. If everyone can see it and so far it’s fine, maybe it’s us who are going a bit crazy.” So we’re going to have the dialogue. And hopefully in a constructive way.

Collison: As a straight man, what is the one thing you hope the film will achieve?

Collison: And for you?

Atieno: I remember when I first watched the film, I hadn’t officially come out. And I told the film team this feels like my coming-out film. Because it’s such a… it’s a very raw story. And I love how it’s told.

It’s a beautiful story and I’ve enjoyed working on the project very much. I feel like it’s a film that families all over Africa can watch and can identify with… We can identify with being brought up in conservative families, with coming to the city to find work, with struggling to find work that is meaningful… It’s a very African story. DM168

A longer version of this story was published by New Frame. I Am Samuel is available on YouTube.