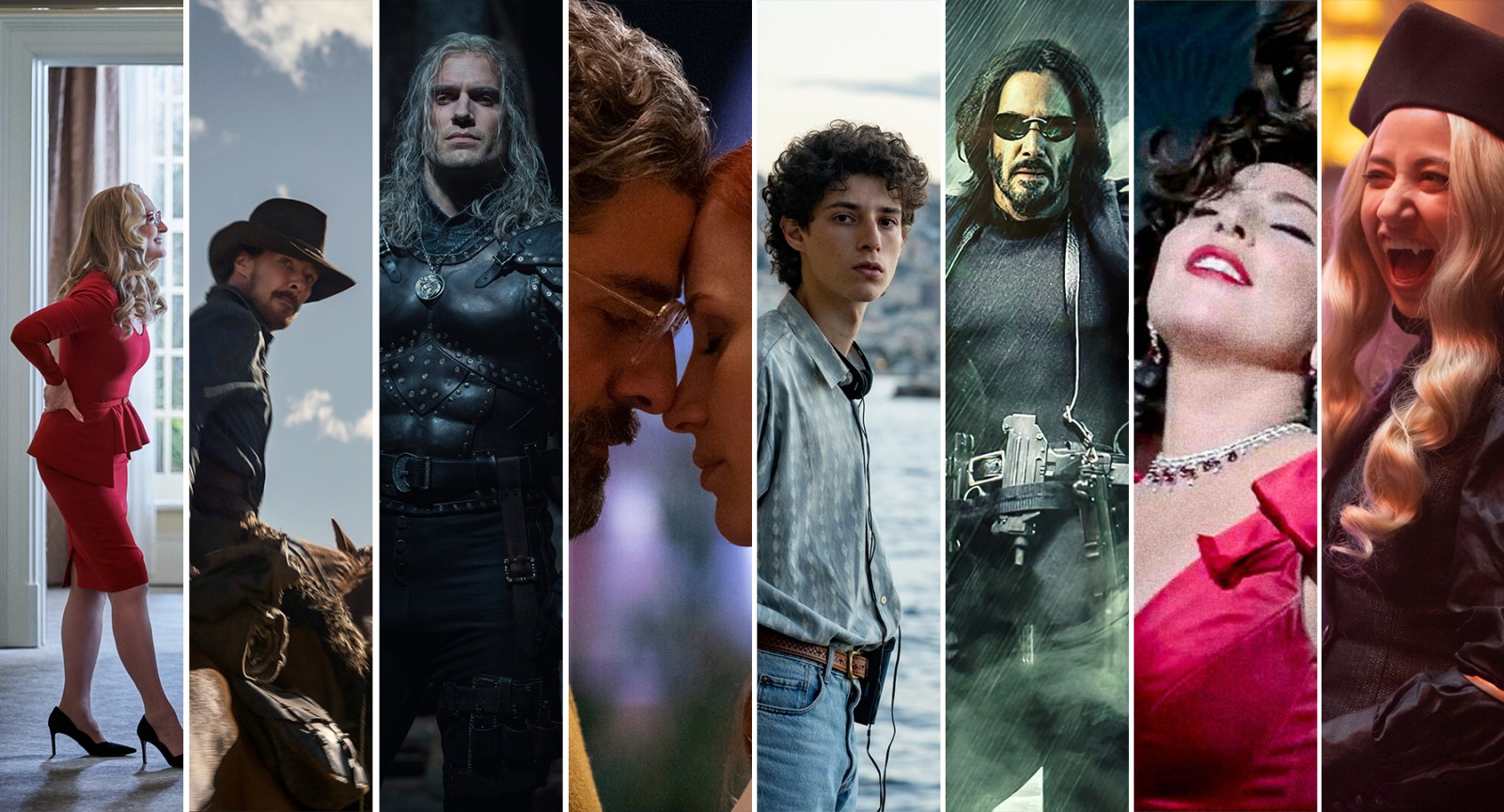 Maverick Life’s pick of films and series to look out for in December 2021 in theatres, and on Netflix and Showmax.

In theatres this month

If you missed the limited screenings of this impeccably animated documentary during the Encounters Film Festival earlier this year, your wait is just about over. Flee animates anonymous interview sessions to bring to life a punishing whirlwind story of a boy’s escape from war-torn Afghanistan to Denmark, and his coming out as gay. The tact and intimacy with which director Jonas Poher Rasmussen handled such raw and painful content won Flee the World Cinema Documentary Grand Jury Prize at Sundance 2021. Read Maverick Life’s full review here.

Lady Gaga becomes “Lady Gucci” aka Patrizia Reggiani and steals the limelight in Ridley Scott’s biographical crime drama based on the 2001 book of the same name. A glamorous romance between Reggiani and Maurizio Gucci (played by Adam Driver) devolves into a power struggle over the Italian fashion brand, Gucci. From kitsch, extravagant parties in the late Seventies to cutthroat court battles, it’s a true story tied together by money and outrageousness.

For some time, Lana Wachowski’s upcoming fourth instalment of the Matrix franchise remained untitled. When it was revealed, “Resurrections” seemed a fitting name considering that it’s been 18 years since The Matrix Revolutions, and considering that somehow, main characters Neo and Trinity are still alive… Several of the original cast are returning, but there is some mystery surrounding the fact that Yahya Abdul-Mateen is playing Morpheus instead of the beloved Laurence Fishburne, who himself doesn’t know why he wasn’t invited back. Not much is known about the plot, but Warner Bros have released a website called Choose Your Reality in which you, like Neo from the first film, choose the red or blue pill, and are shown a different trailer for The Matrix Resurrections depending on your choice.

The Summit Of The Gods: 30 November

A sophisticated French animated adaptation by manga artist Jirô Taniguchi about a young Japanese photojournalist who stumbles upon the location of a reclusive legendary mountaineer believed to have been missing for years. The film has a mystical quality, yet also an understated realness in the treatment of its characters. It explores existential themes relating to human impermanence and the hunger for greater heights.

The Power of the Dog: 1 December

Benedict Cumberbatch may seem an unusual choice of actor to star in a Western until you see Jane Campion’s Power of the Dog, based on the 1967 novel of the same name. In the context of the Wild West, which we have come to associate with violence, hardship and bravado, this Western drama focuses on themes like toxic masculinity and substance abuse. The hard-working cast includes Kirsten Dunst, Jesse Plemons and Kodi Smit-McPhee.

Voir is for those cinephiles who enjoy discussing films almost as much as watching them. Producers David Fincher and David Prior riff on the magic of cinema in this new six-episode visual essay series. In each episode, we reminisce about classics that captured the world’s imagination or changed the course of movie history, and we hear personal accounts of the love of film from film journalists, including playlist contributor Walter Chaw, Sasha Stone, Tony Zhou, Drew McWeeny and Taylor Ramos.

The Hand of God: 15 December

Italian director and screenwriter Paolo Sorrentino, best known for his Academy Award-winning film La Grande Bellezza (The Great Beauty) reimagines the most traumatic experience of his youth in which his life was inadvertently (very inadvertently) saved by football star Diego Maradona. It’s an autobiographical coming-of-age film about a teenager growing up in Naples in the Eighties, told from the perspective of an adolescent, with all the associated social concerns of that age, but also with Sorrentino’s sincerity and nostalgic sensibility.

The Witcher, based on a franchise of novels and an extremely popular video game series, became one of Netflix’s most popular shows of all time in 2020, and is about to release a second season. Much of its appeal comes down to Henry Cavill’s portrayal of the stoic monster-slaying protagonist, a man of very few words (he occasionally says “fuck”, but mostly he just grunts) whose chiselled abs are probably sharper than his sword. The Witcher is a raunchy, violent spectacle of primal entertainment, peppered with blunt humour and erratic, unpredictable plot pieces that make it easy to escape into if you have an appetite for fantasy.

Don’t Look Up is another example of a film written before the pandemic that took on a whole new layer of meaning. DiCaprio and Lawrence play astronomers trying to warn the world about a planet-killing comet hurtling towards Earth, but nobody seems to grasp the severity of the situation, not even the cocky, self-promoting president played by Streep.

It was written as a comment on climate change denial and apathy, but the public’s mistrust of scientists, exacerbated by the media and an irresponsible American president, could apply just as easily to the anti-vax pandemic and misinformation about Covid. Don’t Look Up will make you laugh the whole way through, except for when you’re contemplating how monumentally screwed we are if we don’t change the global culture of shrugging off the warnings of scientists.

What We Do In The Shadows S3: 1 December

What We Do in the Shadows is simply one of the funniest shows on TV. It’s a comedy-horror mockumentary series based on the film of the same name, both of which are directed by the kings of Kiwi cringe comedy, Taika Waititi and Jemaine Clement.

The fourth wall opens and closes like a sliding glass door, alternating between the action and private interviews, much like in The Office. The primary interviewees are several inept immortal vampires and their human butler who navigate lockdown-style roommate politics in their house-share on Staten Island.

The humour is unapologetically silly, filled with bathos and uncomfortable interactions, and while the characters’ inventive personal journeys are genuinely compelling, the show could not take itself less seriously. Read Maverick Life’s full review of the equally hilarious 2014 film here.

If you plough through What We Do In The Shadows before the year is over and find yourself still craving that delicious New Zealand cringe-comedy, check out Baby Done, also produced by Waititi.

This bouncy indie comedy about a quirky couple coming to terms with an unplanned pregnancy deals with the quandary of parenthood in a startlingly honest and cheeky way.

Scenes From A Marriage S1: 1 December

Hagai Levi directs the impeccable Oscar Isaac and Jessica Chastain in an intimate and intense remake of Ingmar Bergman’s iconic 1973 Swedish miniseries, exploring the fickle nature of love and attraction, and the shackles and challenges of monogamy and the modern institution of marriage.

Isaac and Chastain’s exceptional performances are the main reason to watch the show. Ironically, the duo uses their chemistry to portray their characters’ lack thereof. Both are accomplished actors in their own right, and having played spouses previously in A Most Violent Year, the nuance and agony in their dispassionate interactions are melancholic and impressive.

Statham plays a ruthless security guard for a cash truck company who becomes suspicious of his background after he goes on a killing spree during an attempted heist. It’s a fairly straightforward revenge-action film about a mysterious, bloodthirsty badass.

If you’re looking for something off the beaten track, you might find it in the virtual screenings at one of the film festivals happening in December.

Another Hole In the Head: 1-15 December

An 18-year-old film festival based in San Francisco which features new and experimental films, both big and small, in the realms of science fiction, fantasy, horror and assorted other genres.

A British film festival celebrating French cinema. All titles are in French with English subtitles. DM/ML