Hunter-gatherer foraging in the urban jungle

Hunter-gatherer foraging in the urban jungle 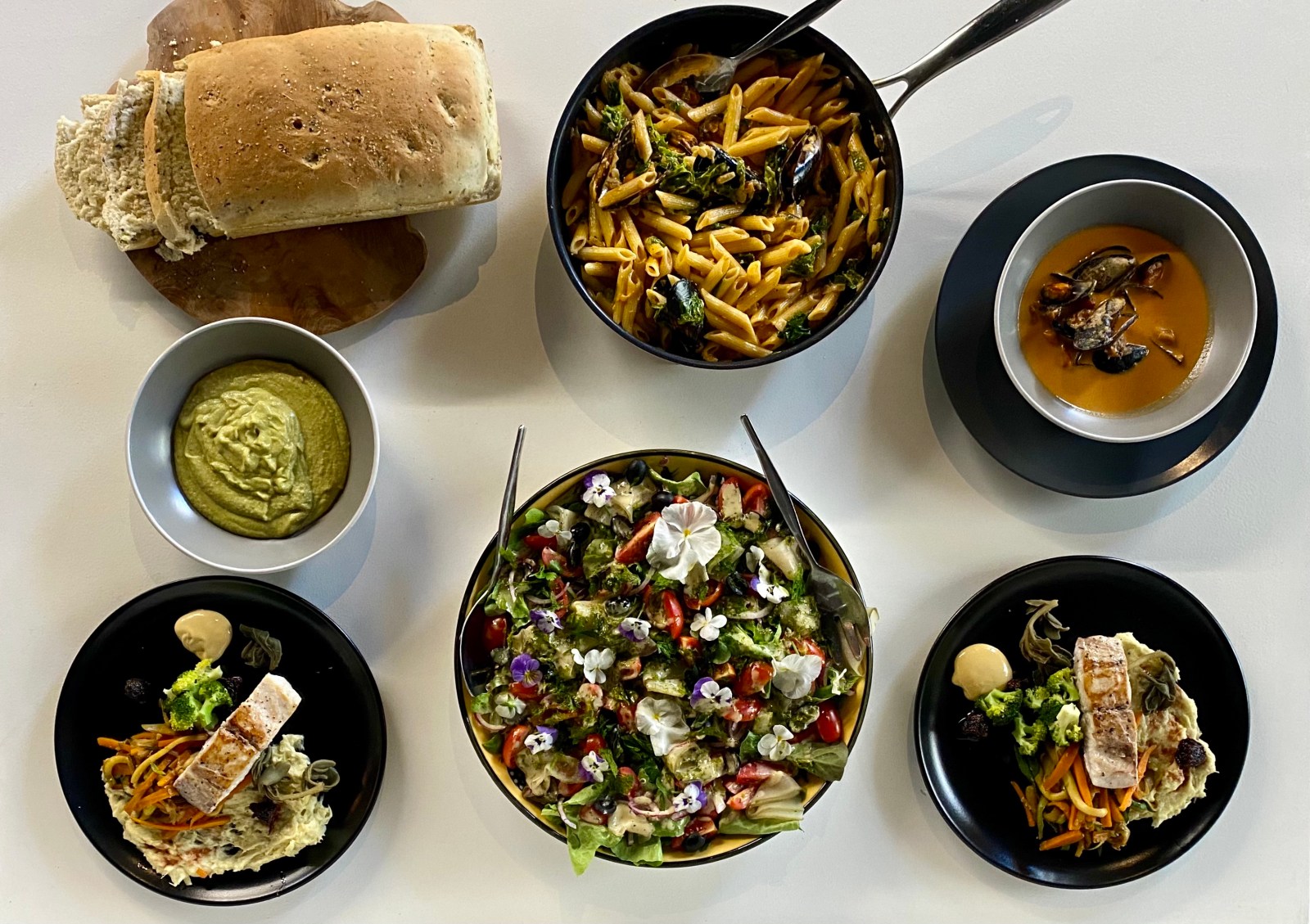 The coastline holds an abundance of edibles that can be foraged to turn into delectable fare for the dinner table. Restaurants like Stirlings in Nieu-Bethesda and Wolfgat on the West Coast do it and now you can forage for yourself at the V&A Waterfront.

We are, at our core, hunter-gatherers. The psychology of supermarkets tells us there is nothing random about product placement. The fruit and veg and flowers are always just inside the door (even at my corner café), and essentials like milk are as far away from there as possible, to force you to meander up and down aimlessly, looking for Marmite, blocking the aisles with your trolley which you are filling up with stuff that isn’t on your list.

A sign that you’re getting old, besides being excited about a new sponge for doing the dishes, or a good day to do laundry, is that you get annoyed when the supermarkets move things around. I read once, long enough ago to be unsure whether I dreamed it or not, that they do this to tap into our primal hunting instinct, suggesting we actually like this part of our brain to be activated. I don’t believe this. I have on occasion stood there in the shop and yelled expletives. Also, there is no way in the world to explain prawn chips with the hope of finding where they have mysteriously been filed, but that’s another story.

Hunting and gathering our provisions from shops, markets and delis is the modern way of life. Some of us grow vegetables and herbs in our gardens, which is a small step away from that, and probably only a few steps from our kitchen. And then there is foraging, the practice of finding your food outside in nature, in the wild.

Foraged food is currently über cool. Wolfgat in Paternoster is famous for it, so famous it’s among the 50 best restaurants in the world and you have to book months in advance. That kind of thing is a huge commitment; I cancel plans for next week if I can. I have been to Stirlings in Nieu-Bethesda though, where Barbara Weitz forages from the surrounding veld to create dishes like no others. But what about giving it a go yourself?

That’s where Stir Crazy Cooking comes in. Based at the V&A Waterfront in Cape Town, it runs courses for super yacht chefs, as well as any other aspiring chefs, and fun classes for team building or with your friends, as well as being a chefs’ theatre and a reasonably priced restaurant. It also hosts urban foraging days, one of which I attended last full moon.

There’s nothing witchy about that; at full moon the tides are at their lowest which means you have more access to the treats hidden in the rock pools. When I received an email the day prior to the event I was slightly alarmed to learn I was to bring shoes that I could wade in, or get wet; as well as a towel and a spare set of clothes… just in case. What the heck? I always keep a towel in my car because Ford Prefect said “A towel… is about the most massively useful thing an interstellar hitchhiker can have” and it’s proven to be excellent advice over the years even though I’ve not left this galaxy.

My fears were unfounded because, as it turned out, I wasn’t forced into potentially soaking conditions; as the others in the group cracked on, I stayed in the shallows and remained dry. I had to take the photos of course.

After meeting an hour well outside of my comfort zone, and being offered warm beverages, Stir Crazy head honcho and our guide, Brett Nussey, talked us through what we could expect as we combed the coastline of Green Point and Sea Point. “In urban areas we find plants that we regard as superfoods, plants that have a bunch of properties like being high in iodine, and high natural immunity boosters,” he said.

“There’s no diving into the sea today, and we don’t go find things like octopus, although we will look for alikreukel, then we’ll pick them, but that’s a bit challenging. The rest of it, there are lots of herbs and plants that have medicinal properties, and that have flavouring properties, and we’ll bring those back and use them with the dishes we’ll make.”

We were given a manual of the various plants we could expect to encounter, with colour photographs to help with identification. Some of them are seasonal, explained Nussey, such as num nums. The bushes all around the Waterfront are still in flower with barely any fruit, but Nussey had found one, which was cut up into tiny pieces so we could taste it.

“We hollow it out and put cream cheese inside and add it to a salad. It has a tart, sour taste, but when it’s ripe it becomes quite sweet,” he said.

Our first stop was to be between Granger Bay and Mouille Point for seaweed, then all the way to the end of Sea Point, just before Bantry Bay, for mussels.

“We’re also going to try to collect soutslaai for a pickle; pelargonium, various types with different scents; confetti bush, wild sorrel, wild garlic, jasmine, which is mainly for decoration as the flavour is not particularly strong; sour figs, African sage, garlic buchu, spekboom, and wild rosemary. We’ll get brown kelp, which can be used in a cordial, also nori, which is great for drying out, so we’ll make chips. Same with sea lettuce.”

I’m embarrassed to say I was today years old when I put vygies and sour figs together. In my defence, I only ever saw the flowers, never the fruit.

We all bundled into Nussey’s van and headed off to the beach for the various seaweeds and soutslaai (aka ice plant). Then it was off to find the mussels, for which a permit is required, and sea urchins, which you can take with abandon; they are considered pests apparently. They also try to escape when you pluck them from the water, but you have to be firm with them. They are food now.

In between, we stopped for a handful of hibiscus flowers, and learnt that things that are hanging on the public side of a fence are fair game, even if a grumpy old man shouts at you for picking them.

Our last stop was Green Point Park where Nussey showed us a wide variety of herbs and edible plants. The City Of Cape Town’s visitors’ guide respectfully requests that you don’t pick the flowers, but it doesn’t say anything about leaves and such…

Back at Stir Crazy, the haul was cleaned and sorted, and we each got to choose a recipe to make ourselves, using our fresh new ingredients (supplemented by a pantry and the fish). One member of the group got to make the foraged salad, picking most of the ingredients from outside the kitchen. It turned out to be exquisite and I regretted my choice, which was seaweed and avocado hummus. The recipe looked easy, and the pic with it was a beautiful vibrant green. But then I messed it up with too much salt, and the colour was disappointing. No one ate it at the communal lunch, and I don’t blame them.

There were way better things on the table, like two mussel dishes (one in spicy coconut milk, the other over pasta with a sea lettuce cream sauce), and line fish with sour fig and leek purée and pickled soutslaai, the salad of course, and seaweed pot bread. Apparently the baker mixed up the sugar and salt but it was still delicious. And my hummus would have balanced it, obviously.

For dessert we had confetti bush ice cream with hibiscus syrup.

The experience lasted about five hours and I enjoyed every moment, from being outside beside the seaside on a sunny day in the middle of the week to the cooking, to the final feast. Afterwards, Nussey sends all the recipes so we can try them again at home. I swear I’m going to get that hummus right. DM/TGIFood

The writer supports Ladles Of Love, which in six years has grown from serving 70 meals at its first soup kitchen to one of the most prolific food charity organisations in South Africa.