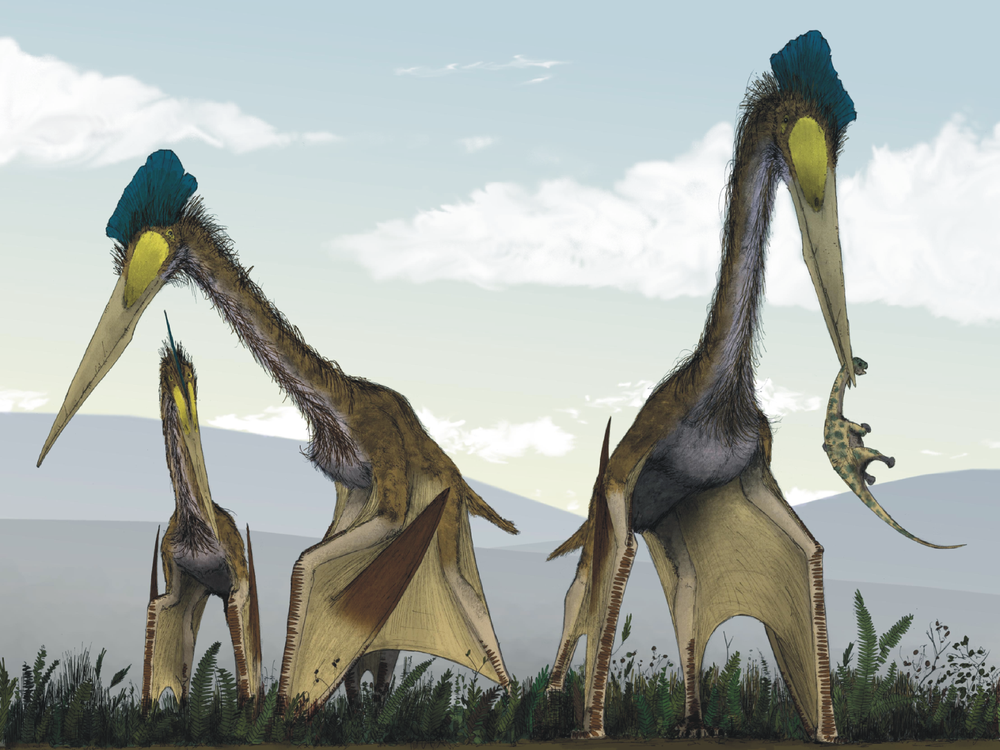 Pterosaurs, the flying cousins of the dinosaurs, reached immense sizes in the late Cretaceous period (100-66 million years ago), some species with wingspans of perhaps more than ten metres.

Their ancestors during the earlier Triassic and Jurassic periods (252-145 million years ago) had far more modest wingspans, up to about two metres. But scientists haven’t found any fossils of these much smaller pterosaur species from the later period.

This absence of smaller forms has often been linked with the evolution of birds, who could have outcompeted and replaced small pterosaur species. This explanation has held sway for a couple of decades or more, but it raises questions.

For example, research suggests pterosaurs were highly precocial (capable of fending for themselves shortly after birth) and could fly soon after hatching. If this was the case, why then were not all pterosaurs replaced by birds who would have outcompeted the young of the large forms as well as the small pterosaur species?

Our international research group has been pondering these and other pterosaur problems for the past 40 years. In our new study, we’ve discovered it was actually probably the babies of giant pterosaurs – known as flaplings – who overshadowed the small adult pterosaurs.

We unearthed hundreds of pterosaur jaw specimens from the mid-Cretaceous Kem Kem Group, a river deposit in south-east Morocco. The area was home to many pterosaurs, among other species.

Most Kem Kem Group fossils are noteworthy because they’re very large. But we singled out five toothless jaw fragments to examine closely, because of their small size. We wanted to understand more about the pterosaurs these fragments belonged to.

We used a variety of techniques to determine whether the jaw fragments were the tips of large or giant pterosaur jaws, were from small adult pterosaurs, or were immature individuals of larger species (immature means anywhere from a hatchling to a teenager). These included examining the texture of the bone’s surface and looking at the the internal structure of the bone (called histology). We also examined small openings on the surfaces of the jaws where sensory nerves emerged, called neural foramina, which were involved in detecting prey.

We found the bone of the jaws had a rippled fibrous texture, typical of immature individuals. More mature pterosaurs have bones with a very smooth surface. The internal structure of the bone also suggested they belonged to young pterosaurs – the bone was fast-growing and lacked growth lines. Finally, the frequency and distribution of foramina indicated the samples were from immature pterosaurs too.

The overall shape and features of the jaws were similar to that of two species of large to giant pterosaurs already described from the Kem Kem Group: Alanqa saharica and Apatorhamphus gyrostega. We concluded the fragments belonged to immature individuals of these two species, some perhaps less than a year old. It’s hard to estimate the size of these pterosaurs based on the small fragments we have, but their wingspan may have been as small as 25cm.

Why is this significant?

Many studies have assumed that flaplings (newly hatched pterosaurs) played little to no role in these ancient ecosystems. This idea would be plausible if pterosaurs were altricial – cared for by their parents after hatching – like many birds. But if pterosaurs were indeed precocial and could care for themselves and even fly soon after hatching, they likely played a more significant role in ancient ecosystems.

To avoid the adults of these large-to-giant pterosaurs outcompeting their own young for resources, they likely occupied different ecological niches. A niche is the role an organism plays in an ecosystem, for example its diet, who it eats, and who eats it. It’s possible the tiny pterosaurs occupied niches previously favoured by small adult pterosaurs in the Triassic to Jurassic periods.

Given the spectrum of pterosaur sizes which likely lived alongside each other – as shown by our work and previous data from the Kem Kem Group – we can ascertain that pterosaurs were more like crocodiles than birds in their feeding ecology. For example, with birds, there will be perhaps ten different species of different sizes alongside a riverbank all feeding on slightly different prey.

Crocodiles, on the other hand, are much less diverse. Some hatchling crocodiles feed on insects, and as they grow they change their diet to small fish, then larger fish and then small mammals, until a big adult crocodile is capable of taking a zebra. It seems pterosaurs did something similar, occupying different niches as they grew – a much more reptilian than avian life strategy.

If birds truly did outcompete small pterosaurs, they would have surely also outcompeted these small, immature flaplings of the giant pterosaurs, resulting in the much earlier extinction of pterosaurs. As it is, birds and pterosaurs coexisted for more than 85 million years, until pterosaurs finally went extinct along with the dinosaurs about 66 million years ago. DM/ML