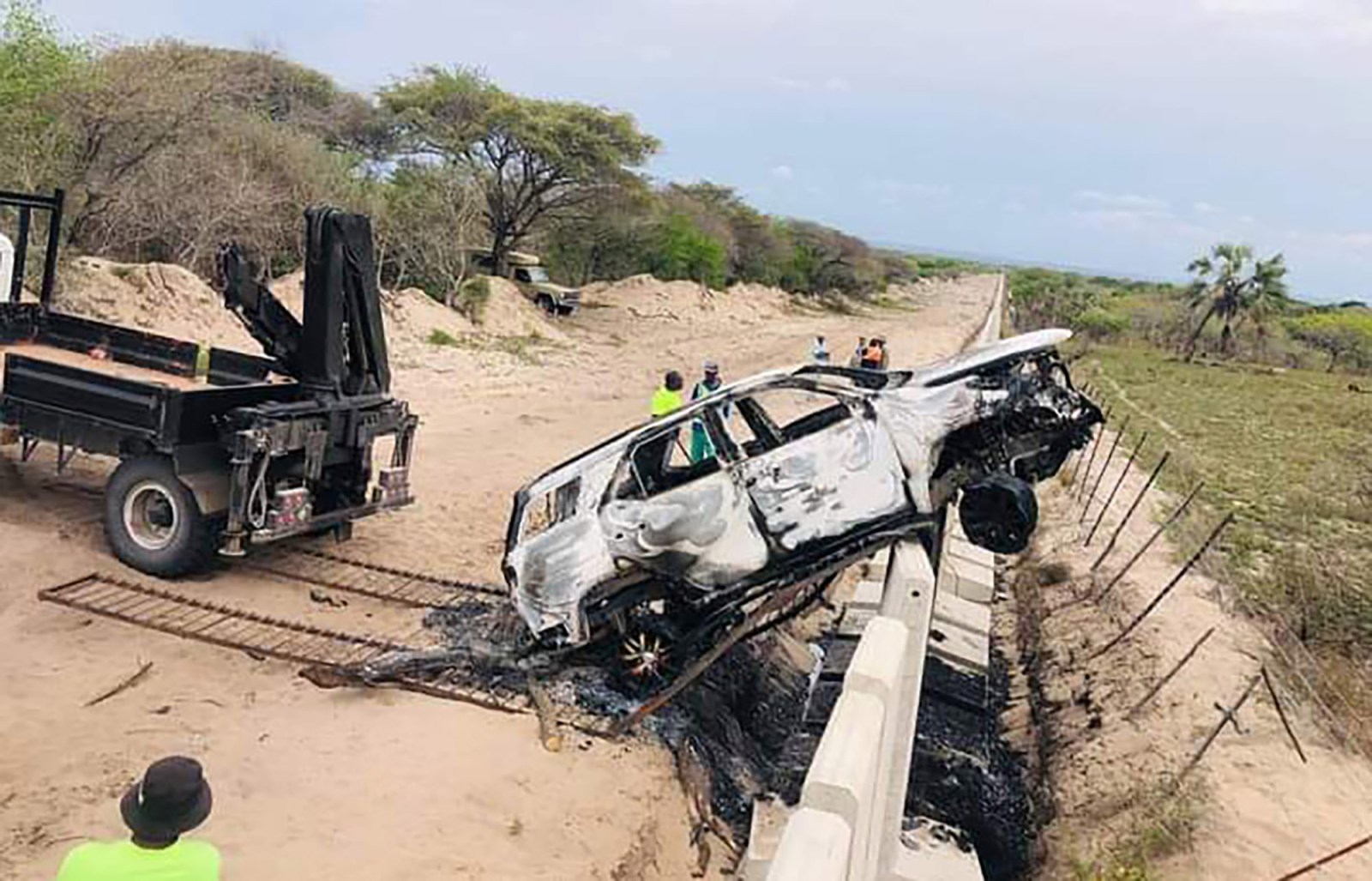 A Toyota Fortuner was being smuggled across the border with Mozambique in July 2021 when it missed the ramp and plunged into a jersey barrier. It is not clear whether it caught fire on impact or was torched by a car theft syndicate. The jersey barrier project has stalled and is the subject of an SIU investigation. (Photo: Supplied)

Residents of Manguzi on the Mozambican border are gatvol of living with the constant menace of cross-border car theft syndicates who they say are becoming more daring and dangerous. While Police Minister Bheki Cele admits there is a ‘huge’ problem, locals say police and the government are failing to protect them from heavily armed thugs who lure them to the Umkhanyakude district where they are robbed, abducted and sometimes killed. To make matters worse, the SANDF and SAPS accuse each other of being on syndicate payrolls.

Residents of Manguzi, Jozini and Pongola and surrounding areas in Umkhanyakude say they are under siege from brazen cross-border crime syndicates who hijack them and spirit their cars across the porous border into Mozambique.

They say they are defenceless against these heavily armed syndicates while leaders in government and law enforcement agencies are failing to protect them.

Two years ago, in August 2019, police in Manguzi announced they had seized 20 vehicles at the border between South Africa and Mozambique. Having been either hijacked or stolen from various parts of the country, they included trucks, bakkies and smaller cars. Some were found hidden in dense bush and forests. Police said others were intercepted just before they crossed the border.

Eight suspects were arrested and have appeared in the Manguzi Magistrates’ Court, charged with possession of suspected stolen vehicles.

Residents say that despite rare police successes, the syndicates are becoming even more daring and dangerous.

Businesspeople who advertise services and products online – who come from Durban and other parts of KwaZulu-Natal, and as far as the Eastern Cape and Gauteng – say they are lured by the promise of big contracts to Umkhanyakude where they are robbed, abducted and even killed.

South Africa shares a 491km border with Mozambique. These are divided into two and separated by the Kingdom of Eswatini. The 410km northern segment runs north-south along the Lebombo mountains from Zimbabwe to Swaziland. The southern segment is 81km and runs east-west across Maputaland in KZN to the Indian Ocean.

The large number of robberies and hijackings in Manguzi and surrounding areas are ongoing. During one huge spike, in 2018, angry Manguzi residents shut down the town and the nearby Kosi Bay border post that separates South Africa and Mozambique, for three weeks, demanding that authorities do something about the syndicates.

Then police minister Fikile Mbalula led a delegation of top government officials to try to mollify the residents, with promises including installing jersey barriers along the border fence, especially in syndicate hotspots.

The R85-million barrier project began in 2019, but was abruptly stopped amid allegations of corruption. The Special Investigating Unit (SIU) said recently it was investigating the tender awarded to a joint venture between ISF Construction and Shula Construction in August 2018. It had launched the corruption probe following a tip-off from whistle-blowers.

Community policing forum chairperson Sboniso Gumede said he and other forum members had been threatened several times by syndicate members.

Gumede said Manguzi is the hardest hit, with repeated attacks from the syndicates. They often arrive heavily armed in the middle of the night, hijack and rob residents and drive them to the border fence where they tie them up before vanishing across the border where a lucrative market for 4×4 and other expensive vehicles awaits.

“These syndicates have become brazen and fearless in recent months because they know the authorities are ineffective in combating their activities. That is why they up the ante,” he said.

“What I have observed over the years is that police action would be effective for a few months and the syndicates would find another method of doing their thing. They would also find a new location from where to spirit the vehicles across the border.”

They had hoped the rate of hijackings would drop when the government started installing jersey barriers. “Now that too has stopped and these concrete blocks are lying there uninstalled and the project abandoned.”

What are jersey barriers?

These precast road barriers are the primary protection method for pedestrians and people working along roadways. They have a traffic-control function and cause minimal vehicle damage on impact. The barriers along the South Africa-Mozambique border are higher and are meant to prevent vehicles from being smuggled across.

The syndicates use a number of routes, the most popular of which appears to be a place called Umgodi Wezimvumbu (loosely translated to “Hippos’ Hole”), not far from the Tembe Elephant Park border fence.

Tracking companies say they have their hands full trying to prevent their clients’ vehicles from being smuggled into Mozambique.

Reyana Gangat, communication officer at Tracker, said: “Any vehicle that is stolen or hijacked in close proximity to a border shows an increased risk of being taken across to other countries. We do continue to work with authorities in South Africa and our surrounding countries to mitigate and minimise this from happening.

“Most of our operations are confidential and sensitive and we are not currently at liberty to disclose these operations. [But] we work with a number of authorities in South Africa and our surrounding countries. This includes insurance companies, international vehicle crime units on bilateral operations in cross-border interventions and with a number of foreign law enforcement agencies.”

She warned that people should be alert and aware of their surroundings when driving. “There are various proactive telematic devices available in the market that will alert the tracking company of a potential hijacking, allowing quick response.”

Richard Chelin, a senior researcher at the Institute for Security Studies, said there are a number of possible reasons for syndicates establishing the area as their turf.

“One of the reasons could be the lack of capacity and resources to address this type of crime. Since it is a transnational and organised crime, authorities would require a dedicated task team with experts and resources to be able to conduct investigations and dismantle these criminal syndicates.”

“Through [the organisation] there should be some form of collaboration that exists to deal with transnational organised crime – especially vehicle theft – in the region,” he said. This could be achieved through:

Police Minister Bheki Cele admitted to Daily Maverick that the South Africa-Mozambique border is a “huge crime problem”, followed by the border with Zimbabwe. There was no problem at the Botswana and Namibia borders, he added.

“The problem is that these crimes become violent, especially Manguzi, Kosi Bay and other areas in Umkhanyakude district.”

His department was spending an extra R3-million a month to beef up policing in the Manguzi area. “We are pumping more resources and opening a new police station and we will be putting human and other resources there to capacitate that police station to deal with the challenges of cross-border crime.”

Cele said corrupt police officers must be identified and arrested. “We have arrested 22 people there recently, including police officers, Home Affairs and syndicates from Mozambique and South Africa.”

He had been in meetings – attended by President Cyril Ramaphosa, his Mozambican counterpart Filipe Nyusi and Mozambican interior minister Arsenia Felicidade Felix Massingue – to find solutions and stop the flow of hijacked or stolen cars from South Africa to Mozambique.

“There is a bridge in Mozambique which is a gateway to Maputo. At times we have an agreement with Mozambique when we have officers stationed [there]. When that happens the rate of stolen vehicles in South Africa dips to low levels because our officers are able to spot cars stolen from South Africa and they have equipment to detect stolen cars.

“So, for us, it is the issue of cooperation between us and Mozambican officials to deal with these issues and once that can be sorted out, will stop the flow of stolen cars going to Mozambique.”

Cele said there are no current joint operations between South African and Mozambican agencies to combat vehicle smuggling, but talks are ongoing.

Neither the police, tracking companies nor the Institute for Security Studies could provide statistics for vehicle smuggling into Mozambique. DM