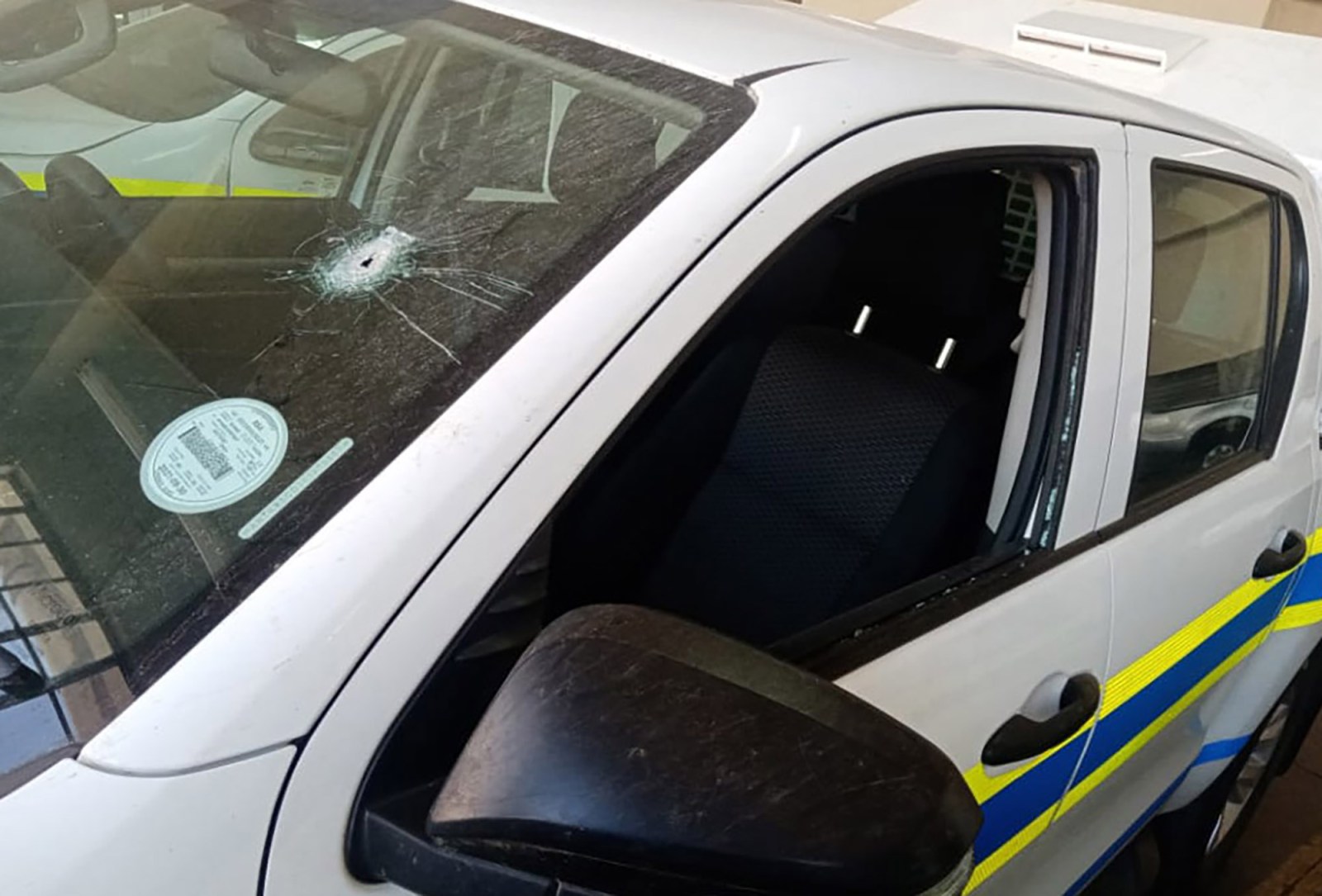 The SAPS vehicles which were damaged by the SANDF shootings while they were pursuing cross-border syndicates and stolen vehicles near the SA/Mozambican border.Photo:Supplied

The South African Police Service (SAPS) and the South African National Defence Force (SANDF) are both probing a 14 September 2021 incident in which SANDF members shot at SAPS members who were pursuing cross-border car thieves near the Mozambican border.

Information about these separate investigations emerged during Daily Maverick’s own investigation – and raises red flags in the war against cross-border vehicle smuggling.

The September 14 skirmish is the latest in an alleged clash between the SAPS and the SANDF, who have kept the other incidents out of the public eye.

The tensions arose from the accusation made by both parties that the other is aiding and abetting cross-border crime syndicates.

On the night of Tuesday, 14 September 2021, Detective Constable MH Mthembu and Sergeant VJ Maphanga were driving a clearly marked police vehicle, following the tracks of a stolen vehicle near the border in Gazini. They came under fire from SANDF members guarding the border.

A bullet grazed Maphanga’s skull, from which fragments were removed in hospital.

The police van was damaged and had to be taken by tow truck to the police garage in Jozini. It has not been repaired.

A case of attempted murder was opened at the Manguzi police station the following day, 15 September.

According to sources, the SANDF has not cooperated and has yet to submit a statement from all the members who were involved, describing why they had to fire at the police van with occupants.

Both the SAPS and the SANDF have admitted that the incident took place, and both say it is being investigated.

Cross-border crime levels are so high that there are mounting accusations that this is because some members of both the SANDF and SAPS are on the payroll of syndicates to enable the latter to smuggle vehicles into Mozambique.

Neither the SANDF nor the SAPS top brass has admitted to bribery claims against their members.

Sboniso Gumede, chairperson of the local community policing forum, said the bribery accusations and the tiff between SANDF and SAPS members is a concern for those who wish to see an end to cross-border crime. He said this is because it is emboldening the syndicates and escalating crime.

The SAPS and the SANDF are supposed to be cooperating under a joint agreement to fight organised crime, including hijacking and smuggling of vehicles to Mozambique. “The non-cooperation and one-upmanship between the police and the army has given the syndicates a free reign, they are operating with impunity,” Gumede claimed.

“If all the law enforcement agencies were to do their work diligently and forcefully, the smuggling and crime syndicates would be a thing of the past. But, clearly, there is no will to fight cross-border crime.”

Approached for comment, SANDF spokesperson Brigadier-General Andries Mahapa confirmed there was an incident in which SANDF members “accidentally” shot at SAPS members. “The SANDF confirms that we are aware of a particular incident that happened in/around Manguzi area on 14 September 2021.

“Our understanding is that the SAPS are conducting their own case of attempted murder. A board of inquiry has been convened to investigate circumstances that led to the incident.”

However, he downplayed the alleged conflict: “The SANDF enjoys good working relations with all law enforcement agencies employed within the role of safeguarding our borders, especially the SA Police Service. In this regard, the SANDF has been working jointly with the SAPS and other law enforcement agencies to intercept vehicles from illegally crossing the border on a daily basis. The confiscated vehicles are handed over to the SAPS or SARS.

“The SANDF as the co-chairperson of the Provincial Joint Intelligence Structure in the province of KwaZulu-Natal, works jointly with the SAPS and there is cooperation between the two organisations. The agreements are implemented without any challenges.”

Mahapa added: “Specific to RSA/Mozambique border, cross-border crimes such as illegal smuggling of dagga, stolen vehicles and undocumented persons are common in the area.”

Police Minister Bheki Cele told Daily Maverick they are aware of the incident and that SAPS and SANDF leadership are dealing with it.

“There is an investigation by both the SAPS and the SANDF regarding this matter. It would be premature for me to comment until these investigations have been concluded and reports have been produced,” he said.

SAPS spokesperson Brigadier Vish Naidoo declined to answer questions, saying Cele had spoken for the ministry and the SAPS.

“He is the higher authority and once he has spoken I cannot say anything further,” said Naidoo.

Richard Chelin, a senior researcher at the Institute for Security Studies (ISS), said cooperation and information-sharing between national and cross-border law enforcement agencies is critical if efforts to curb cross-border crime are to succeed.

“The information available is quite limited actually. While there have been media reports around cross-border crimes, there has been little on cross-border crime syndicates which are terrorising communities in the KZN border region with Mozambique.

“As such, it has been listed as one of the priority areas for the Southern Africa Regional Police Chiefs Cooperation Organisation. As a crime type, it is systematic and transnational and organised criminal groups exploit routes and systems used by the legitimate economy. Yet, there is little research done on this issue.”

Other experts say the tensions between the SAPS and the SANDF along the border arose because there are many agencies operating there, including the Department of Home Affairs, all with their own heads and priorities.

In September 2021, Cabinet announced it had appointed Dr Nakampe Michael Masiapato as commissioner of the BMA agency and Major-General David Chilembe as deputy commissioner for operations. DM

Read Part One and Part Two of the series.